Background and Aim: The ankle-brachial index (ABI) is recognized to be a good marker for atherosclerosis, and is useful in the diagnosis of peripheral artery occlusive disease (PAOD) which is prevalent among patients on hemodialysis (HD).

Methods: This randomized trial aimed to evaluate the effect of far-infrared radiation (FIR) therapy on ABI in HD patients with PAOD. PAOD was defined as patients with ABI < 0.95. One hundred and eight HD patients were enrolled, including 50 in the control group and 58 in the FIR group. A WS TY101 FIR emitter was applied for 40 minutes during each HD session, three times per week for six months. The ABI was measured before and after the FIR therapy.

The incidence of non-traumatic lower-extremity amputation among patients with end-stage renal disease (ESRD) is higher than that in non-ESRD patients (1). The most common indication for amputation in the ESRD population is peripheral artery occlusive disease (PAOD), which is associated with increased cardiovascular mortality, morbidity, and hospitalization (2,3). At the same time, the ankle-brachial index (ABI) was found to be a good marker for atherosclerosis and is useful in diagnosing PAOD. Ono et al. (4) evaluated the all-cause and cardiovascular morality among patients on hemodialysis (HD) using ABI and found that a reduction in ABI predicted poor survival.

The pathophysiology of atherosclerotic lesions is multifaceted and complicated. These lesions are composed of stable atherosclerotic plaques (rich in extracellular matrix and smooth muscle cells) and unstable plaques (rich in macrophages, foam cells, and fibrous cap which is weak and prone to rupture) (5,6). The classical medical management of atherosclerosis involves the modification of risk factors, medical therapy (i.e., anti-platelet drugs, cilostazol, and statins), and regular exercise (7). However, these therapies have not been systematically applied to ESRD patients. Furthermore, the optimal management of PAOD in ESRD patients is quite controversial, and other therapies are needed to effectively treat stenosis of the lower-extremity among HD patients with PAOD.

Far-infrared radiation (FIR) uses electromagnetic waves at wavelengths of 5.6 to 1000 μm (8). This therapy may improve endothelial function and reduce the severity of certain cardiovascular diseases (9,10). Moreover, some studies indicate that FIR therapy can improve the access flow and survival of arteriovenous fistula (AVF) in patients on HD, as well as the access maturation and patency of newly-created AVF in patients with chronic kidney disease (CKD) stages 4 and 5 (11,12). The most common cause of AVF failure is stenosis at the venous anastomosis due to abnormal neointimal proliferation and extracellular matrix deposition (13). These changes are also observed in classic atheroma, suggesting that atherosclerotic lesions and venous stenosis in AVF may share similar pathogenic mechanisms (14,15).

The technology of FIR has been applied in a variety of fields, including treatment of ischemic lesions and skin tissue necrosis due to trauma and diabetes. Whether FIR therapy can improve PAOD awaits further confirmation. For this purpose, this study aimed to evaluate the effect of FIR on ABI in HD patients with PAOD.

This prospective randomized controlled trial study was conducted in three HD clinics in southern Taiwan. The inclusion criteria of patients were: 1) having received maintenance HD therapy for at least 3 months; 2) age >20 years; 3) receiving regular anti-hypertensive drugs or oral hypoglycemic agents for at least 1 month; 4) patients with PAOD were defined as those with ABI <0.95 (16). Patients who refused any ABI-form device examination (n=5), those with atrial fibrillation (n=4), Those with bilateral below-knee amputation (n=2), and those with hospitalization or antibiotic treatment in the last 4 weeks (n=5) were excluded. (Figure 1)

A total of 116 patients were enrolled from August to September 2015. All of the patients received HD three times per week within the study period for six months (October 2015 to March 2016). Each HD session was performed for 3.5-4.5 hours, with a blood flow rate of 250-300 mL/min and dialysate flow of 500 mL/min. Blood samples were taken before and after HD to calculate Kt/V (17). The patients were randomly allocated to either the FIR group or the control group (1:1) via computerized minimization algorithm to ensure balance between the two groups.

The study protocol was approved by the Institutional Review Board of Kaohsiung Medical University Hospital KMUH-IRB-2014-04-06(I). Written informed consent was obtained from the patients, and all clinical investigations were conducted according to the principles expressed in the Declaration of Helsinki. The patients also consented to the publication of the clinical details.

In this study, a WS TY101 FIR emitter (WS Far Infrared Medical Technology Co., Ltd., Taipei, Taiwan) was used for FIR therapy. The electrified ceramic plates of this emitter generated electromagnetic waves at wavelengths of 5 and 12 μm (peak at 8.2 μm). The top radiator was set at a height of 25 cm above the surface of both lower legs, with treatment time set at 40 min during each HD session. The patients received ABI from an ABI-form and questionnaire. Follow-up ABI and questionnaire were obtained after six months of FIR therapy.

Demographic and medical data, including age, sex, and co-morbidities were obtained from medical records and patient interviews. Fasting blood sugar were obtained from samples using an auto-analyzer (Roche Diagnostics GmbH, D-68298 Mannheim COBAS Integra 400). The Kt/V was evaluated as a marker of dialysis and determined according to the Daugirdas procedure [17]. Efficacy was assessed using a pain visual analog scale (VAS).

The values of ABI were measured 10-30 min before HD. The ABI were measured using an ABI-form device that automatically and simultaneously measured blood pressure in both arms and ankles using an oscillometric method (18). Briefly, occlusion and monitoring cuffs were placed tightly around the upper arm without blood access and on both lower extremities with the patient in a supine position. The ABI was calculated by the ratio of the ankle systolic blood pressure divided by the arm systolic blood pressure. The ABI measurements were done twice for each patient.

Statistical analysis was performed using the SPSS 17.0 for Windows (SPSS Inc. Chicago, USA). Data are expressed as percentages, mean ± standard deviation, mean ± standard error of the mean for VAS scores, or median (25th-75th percentile) for duration of dialysis and triglyceride. Differences between groups were analyzed by Chi-square test for categorical variables, by independent t-test for continuous variables with approximately-normal distribution, and by Mann-Whitney U test for continuous variables with skewed distribution. Paired t-test was used to compare ABI change before and after the FIR therapy. Variables with a p < 0.2 by univariate analysis were selected for multivariate logistic regression analysis to identify factors associated with bilateral ABI increase after FIR therapy. Statistical significance was set at p<0.05.

Flow chart of study participants for the randomized controlled trial to evaluate the effect of far infrared therapy on PAOD in hemodialysis patients. 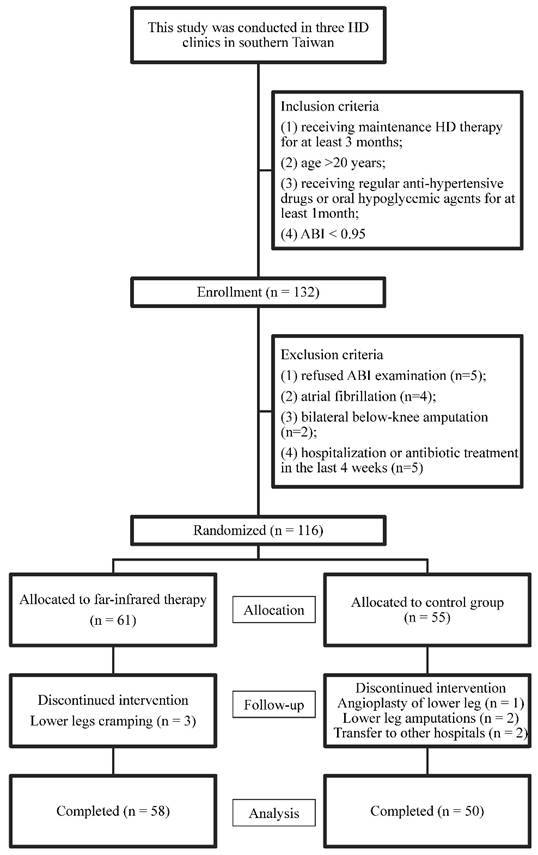 As shown in Fig 1, a total of 116 patients were enrolled in the study, of which 55 patients were randomly distributed to the control group and 61 patients, to the far infrared treatment group. During follow-up, one patient received angioplasty for the lower extremity, two underwent lower leg amputations, three developed lower leg cramping, and two patients were transferred to another hospital. This study ended on March 2016. One hundred and eight patients completed the study, with 58 patients in the FIR group and 50 in the control group. Their mean age was 63.1±11.9 years old. Comparison of baseline characteristics between the FIR and control groups was shown in Table 1.

ABI changes before and after FIR therapy

Comparison of baseline characteristics between patients with and without FIR therapy.

ABI changes of patients with and without FIR therapy.

Values expressed as odds ratio and 95% confidence interval (CI). Abbreviations are the same as in Table 1.

Evaluating the effect of FIR therapy on AVF, Lin et al. found that FIR therapy increased access flow of AVF and improved the survival of AVF in HD patients after FIR therapy for one year (11). They also found that FIR therapy improved the access flow, maturation, and patency of newly-created AVF in patients with advanced CKD after FIR therapy for one year (12). The findings were attributed to both the thermal effect-induced vasodilation and the non-thermal effects of inhibiting intimal hyperplasia, thereby improving endothelial dysfunction. However, the present study did not observe the effects of FIR therapy on ABI in HD patients with PAOD. There are several possible reasons. First, the FIR therapy was just for six months in this study, while the study by Lin had FIR therapy for one year (11,12). Second, the studied vessels in two studies were completely different. The AVF is located in the superficial site of the upper extremity, whereas the occluded artery of PAOD is in the deeper site of the lower extremity. Third, the pathogenetic mechanisms of stenosis in AVFs and PAOD are different. The development of neointimal hyperplasia in AVF includes surgical trauma at the time of arteriovenous surgery, hemodynamic sheer stress at the vein-artery or vein-graft anastomosis, injuries from routine needle punctures, and repeated balloon angioplasties. These mechanisms are different from those involved in the arterial atherosclerosis in PAOD. Lastly, it's very probable that the occlusion level of PAOD resides in the more proximal sites, not just in the lower extremity. In the present study, the radiator was set at a height of 25 cm above the surface of both lower legs. The occluded vessels might not have been exposed to the FIR therapy. In our opinion, shorter FIR therapy duration, deeper occluded vessels, different mechanisms of stenosis, or the failure to expose occluded vessels to FIR therapy might explain the negative results.

Another important finding of this study is that HD patients with higher uric acid level have bilateral ABI increase after FIR therapy. However, the mechanism by which uric acid is associated with atherosclerotic disease remains unclear. Uric acid may increase platelet adhesiveness, or urate crystals may be associated with increased platelet lysis (19-21). Uric acid may also play a role in the formation of free radicals and in oxidative stress (22,23). Moreover, hyperuricemia per se can induce endothelial dysfunction by inhibiting the synthesis and release of nitric oxide (24). The renin-angiotensin system in vascular endothelial cells (a hormonal vasoconstriction system) is also activated by elevated uric acid (25). A previous experiment has confirmed that the solubility of monosodium urate falls sharply with decreasing temperature (26). Local temperature may partially explain the clinically observed distribution of gouty tophi and gouty arthritis. FIR therapy is a form of heat therapy, which may allow multiple energy transfer to as deep as 2 to 3 cm into subcutaneous tissue (27). Data from animal models have shown that FIR therapy improves vascular endothelial function through up-regulating of endothelial nitric oxide synthase (9). Furthermore, non-thermal effects of FIR therapy have been shown to inhibit vascular inflammation by inducing heme oxygenase-1 to increase skin microcirculation (28). Presumably, urate deposition in the lower extremity of patients with PAOD during cold temperatures and urate-related atherosclerosis may improve after FIR therapy. This may play a role in the clinically observed increase of ABI after FIR therapy in HD patients with hyperuricemia, implying a novel impact of FIR therapy on PAOD among different groups.

This study has some limitations. First, although the study patients were randomly assigned by controlling as many factors as possible, individual variations of vascular conditions could still influence the results. A large-scale, prospective, randomized, controlled trial is still warranted to evaluate the effect of FIR therapy on PAOD in HD patients. Second, subacute occlusion may stimulate the growth of a collateral circulation, which supply the regions distal to the blood occlusion. The function of the occluded artery is thereby partially, sometimes completely, restored. ABI may not be truly reflective of the degree of obstruction. Lastly, it is very difficult to quantify, standardize the FIR therapy, and tailor the treatment to individual need.

The research presented in this article is supported by the grants from the Ministry of Science and Technology (MOST 105-2314-B-037-016), and Kaohsiung Municipal Hsiao-Kang Hospital (kmhk-104-001), Kaohsiung Medical University, Kaohsiung, Taiwan.

We thank Kaohsiung Municipal Ta-Tung Hospital and the Ming-Kang HD clinic for the inclusion of patients in this study.

There is no conflict of interest in the information contained in the manuscript.