Menthol is used as a constituent of food and drink, tobacco and cosmetics nowadays. This cold receptor agonist has been used as a nasal inhalation solution in the daily life. The effect of menthol on nasal mucosa in vivo is well known; however, the effect of the drug on tracheal smooth muscle has been rarely explored. Therefore, during administration of the drug for nasal symptoms, it might also affect the trachea via oral intake or inhalation. We used our preparation to test the effectiveness of menthol on isolated rat tracheal smooth muscle. A 5 mm long portion of rat trachea was submersed in 30 ml Krebs solution in a muscle bath at 37ºC. Changes in tracheal contractility in response to the application of a parasympathetic mimetic agent were measured using a transducer connected to a Pentium III computer equipped with polygraph software. The following assessments of menthol were performed: (1) effect on tracheal smooth muscle resting tension; (2) effect on contraction caused by 10-6 M methacholine as a parasympathetic mimetic; (3) effect of the drug on electrically induced tracheal smooth muscle contractions. Results indicated that addition of a parasympathetic mimetic to the incubation medium caused the trachea to contract in a dose-dependent manner. Addition of menthol at doses of 10-5 M or above elicited a relaxation response to 10-6 M methacholine-induced contraction. Menthol could also inhibit electrical field stimulation (EFS) induced spike contraction. However, it alone had a minimal effect on the basal tension of trachea as the concentration increased. We concluded that the degree of drug-induced tracheal contraction or relaxation was dose-dependent. In addition, this study indicated that high concentrations of menthol might actually inhibit parasympathetic function of the trachea.

Menthol (2-isopropyl-5-methyl-cyclohexanol) is widely appreciated for its ability to produce a cooling sensation. It is used as a constituent of food, drink, tobacco and cosmetics in the daily life. It can reduce flatulence and colic pain in patients with irritable bowel syndrome [1]. It was shown to reduce dyspnea in many respiratory conditions [2]. It is recognized as a naturally-occurring cold receptor agonist that specifically activates the transient receptor potential melastatin 8 (TRPM8) channel in the skin and mucous membranes [3]. It can induce a cooling sensation that appears to reduce the perception of respiratory effort without actually altering the temperature of the skin or mucous membranes [4-6]. Because of the possible dual action of menthol on sensory nerves and smooth muscle, it may have a therapeutic role in upper respiratory tract infection, bronchitis and asthma. These properties of menthol point towards a compound of dual efficacy which may be an effective and well tolerated treatment for both respiratory tract infection and asthma by improving airways caliber and alleviating the associated cough.

Chemicals used were of the highest purity available. All the chemical reagents were obtained from Sigma (St. Louis, MO, USA). We tested methacholine as a tracheal contraction drug. Eighteen rats were anesthetized by intraperitoneal administration of pentobarbital (45 mg/kg) and two pieces of trachea (about 5 mm in length) were removed from each rat. This study was approved by an animal experiment review board (LAC-2013-0098).

The tracheal specimen was mounted using two steel plates and submersed in a 30ml muscle bath at 37ºC as the previous report [7, 8]. The bath (Fig. 1) was filled with 30 ml Krebs solution consisting of (mmol/L) NaCl, 118; KCl, 4.7; CaCl2, 2.5; MgSO4·7H2O, 1.2; KH2PO4, 1.2; NaHCO3, 25.0; and glucose, 10.0. Menthol was dissolved in dimethylsulphoxide (DMSO) and subsequently diluted in Krebs solution. Our preliminary studies showed that the vehicle (diluted DMSO) had no effect on the in vitro studies of rat tracheal smooth muscle. The upper side of the tracheal strip was attached to a Grass FT-03 force displacement transducer (AstroMed, West Warwick, RI, USA) using a steel plate and a 3-0 silk ligature. The other side of the strip was fixed to a steel plate attached to the bath. A passive tension of 0.3 g was applied to the strips and subsequent changes in tension were recorded continuously using Chart V4.2 software (PowerLab, ADInstruments, Colorado Springs, CO, USA). Preliminary tests showed that the tracheal strip immersed in the bath solution used for subsequent experiments did not contract when basal tension was applied. Before drug assays were conducted, isolated tracheas were equilibrated in the bath solution for 15-30 min, during which continuous aeration with a mixture of 95% O2 and 5% CO2 was applied. Stepwise increases in the amount of drugs used were employed to study contraction or relaxation responses of tracheal strips. All drugs were administered by adding a defined volume of stock solution to the tissue bath solution. In each experiment, one untreated strip served as a control. 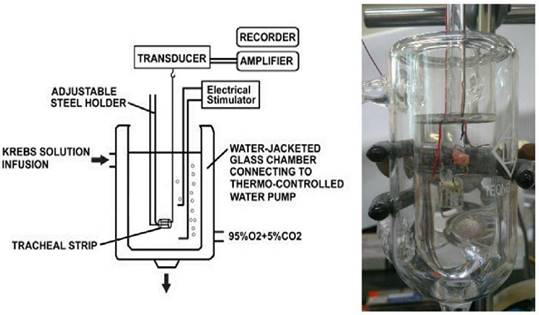 The degree of contraction or relaxation of tracheal strips was estimated from the tension applied to the transducer. Tracheal contraction induced by a small dose of methacholine was easily detected (not shown), and the tissue remained in a contracted state until the drug was rinsed from the tissue.

Addition of the cold receptor agonist, menthol, on the basal tension elicited a negligible response (Fig. 2), but resulted in a small relaxation of the trachea when introduced after the addition of a constricting agent such as 10-6 M methacholine (Fig. 3, 4). Low doses of menthol resulted in a mild effect on contraction and higher doses slightly relaxed the trachea smooth muscle (Fig. 4). At 10-8 M menthol, the tension was 99.5% of control values (Fig. 4). While at 10-5 M and 10-4 M menthol, the tensions were 80.1% and 71.0%, respectively (Fig. 4). The difference of tension among 10-8 M menthol and 10-5 M or 10-4 M menthol was statically significant (P<0.05).

Tension changes in the rat trachea after the application of various menthol concentrations. Basal tension was 0.3 g.

Original recording of the effects of menthol on 10-6 M methacholine-induced contraction of rat trachea.

Effects of menthol on 10-6 M methacholine-induced contraction (contraction area was calculated at 100% with no addition of menthol) of rat trachea. The difference of tension between 10-8 M menthol and 10-5 M menthol or 10-4 M menthol was statically significant (P<0.05). Results were mean ± SD (n = 6). 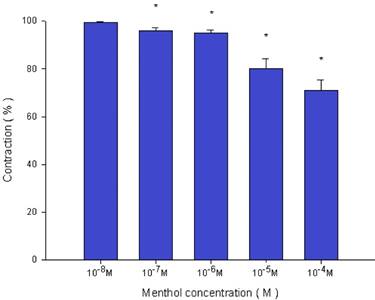 Original recording of the effects of menthol on electrically induced tracheal smooth muscle contractions was noted. Higher doses of menthol also decreased the spike contraction induced by EFS, and the basal tension was increased at the same time. 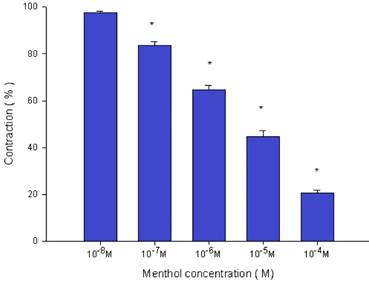 Although tracheal responses to drugs by in vitro assays have been developed by other groups [9, 10], our method provides distinct advantages [7]. Our test only requires a few millimeters of trachea, which is excised as an intact ring. An intact tracheal ring is an important component of our technique [7], and is in contrast to previous authors' use of tracheal smooth muscle strips to conduct drug tests [9-11]. Our test is simpler and more robust than the tests in which tracheal rings are destroyed. Furthermore, an intact tracheal ring is much more representative of a physiological setting than smooth muscle strips.

Nevertheless, the results of our experiments should be interpreted within the context of the test materials used. Although it was difficult to determine which tissue component of the trachea was responsible for drug-induced contraction, the nature of specific tissues and their responses to specific drugs provided some indication. Firstly, the tracheal strips used in our study were crude preparations that contained cartilage and tracheal smooth muscle. The smooth muscle of the trachea appeared to be the main tissue component responsible for contraction, as the other components (epithelium, glands, connective tissue, nerves, and cartilage) did not contract to a significant extent. Because this method involved cross contraction, changes in tension were caused by radial contraction of the tracheal ring. Although responses to drugs and electrical stimulation have been verified for similar preparations [9-11], the contractile response observed in this study was probably an aggregate of the responses of various types of muscle tissue. Secondly, the isolated tracheal preparations used in our experiments were excised from rats without damaging the endothelium or smooth muscle. Therefore, it is reasonable to assume that tracheal responses to test agents in our study are comparable to those observed after application of a spray or drug inhalation to the trachea during an asthma attack.

The cholinergic contracting agent tested in this preparation is commonly used for research purposes. It is noteworthy that menthol-induced relaxation of tissue was dependent on prior partial contraction of smooth muscle using methacholine. Thus, it should thus be possible to assay the effects of common drugs and potential therapeutic agents supposedly responsible for relieving asthma. Menthol, a cold receptor agonist, could mildly reduce methacholine-induced contraction. It is known as a TMRP8 agonist [12], yet the mechanism by which this cold receptor agonist affected the trachea smooth muscle is unknown and further studies are needed to elucidate this question.

Menthol inhibited contractions induced by EFS. In general, Ca2+ influx plays an important role in determining the contractile force of smooth muscle by activating myosin light-chain kinase (MLCK) and subsequent phosphorylation of the myosin light chain [16]. Methacholine are known to activate different Ca2+ influx pathways, i.e., receptor-operated Ca2+ entry and voltage-dependent Ca2+channels (mostly dihydropyridine-sensitive L-type Ca2+ channels), respectively [17]. The inhibitory effects of menthol on Ca2+ influx and contraction were similar to those of non-selective inhibitors of Ca2+ channels such as SKF-96365, as reported previously [18, 19]. Thus, the present results indicate that menthol attenuated both contractions induced by methacholine and EFS in rat tracheal smooth muscle. Menthol has been recognized as a compound that activates the cold receptors in sensory neurons [5]. Involvement of the cold receptors sensitive to menthol has also been proposed in nonneuronal cells [5, 16]. Taken together, these findings indicate that stimulation of an unknown cold receptor may be involved in the relaxation mediated by menthol in guinea pig tracheal smooth muscle.

These properties of menthol point towards a compound of dual efficacy which may be an effective and well tolerated treatment for both respiratory tract infection and mild asthma by improving airways caliber and alleviating the associated cough.

The authors have no conflicts to declare pertaining to this article.