Esophageal squamous cell carcinoma (ESCC) is a genetically complex tumor type and is a major cause of cancer-related mortality. The combination of genetics, diet, behavior, and environment plays an important role in the carcinogenesis of ESCC. To characterize the genomic aberrations of this disease, we investigated the genomic imbalances in 19 primary ESCC cases using high-resolution array comparative genomic hybridization (CGH). All cases showed either loss or gain of whole chromosomes or segments of chromosome(s) with variable genomic sizes. The copy number alterations per case affected the median 34% (~ 1,034Mb/3,000Mb) of the whole genome. Recurrent gains were 1q21.3-qter, 3q13.11-qter, 5pter-p11, 7pter-p15.3, 7p12.1-p11.2, 7q11-q11.2, 8p12-qter, 11q13.2-q13.3, 12pter-p13.31, 17q24.2, 20q11.21-qter, and 22q11.21-q11.22 whereas the recurrent losses were 3pter-p11.1, 4pter-p12, 4q28.3-q31.22, 4q31.3-q32.1, 9pter-p12, 11q22.3-qter and 13q12.11-q22.1. Amplification of 11q13 resulting in overexpression of CTTN/CCND1 was the most prominent finding, which was observed in 13 of 19 ESCC cases. These unique profiles of copy number alteration should be validated by further studies and need to be taken into consideration when developing biomarkers for early detection of ESCC.

Esophageal cancer is one of the most common malignant neoplasms worldwide, ranking seventh in incidence and sixth in mortality among tumors of all sites in both males and females combined, according to the recent statistics of the World Health Organization (WHO) 2012 (http://globocan.iarc.fr/). The two main histological esophageal cancer types, adenocarcinoma (ADC) and squamous cell carcinoma (SCC) differ in their incidence, geographic distribution, ethnic pattern, and etiology. Esophageal squamous cell carcinoma (ESCC) is the most prevalent type and constitutes more than 90% of esophageal cancers worldwide,[1] even though esophageal ADCs are more prevalent in the USA.[2] Regions with such high incidence of ESCC (15150/100,000) are referred to as the famous ''Asian Esophageal Cancer Belt,'' which includes the countries of the Caspian littoral region, the central Asian republics, Mongolia and north-western China, which have a 10-100 fold greater chance of being affected by esophageal cancer compared to other countries.[3] The Jilin Province in North-Eastern China is part of the “Asian Esophageal Cancer Belt.” The major ethnic groups in the Jilin Province comprise the Han Chinese (~91%), Korean (~ 4.3%), and Manchu (~ 3.4%) populations.

Multiple etiologies including several behavioral and environmental factors such as an individual's diet, tobacco smoking, alcohol consumption, exposure to chemical carcinogens, and chronic inflammation are known to be risk factors for the development of ESCC.[4] Regardless of the ethnic origin of the patients and the etiological factors, genetic instabilities such as microsatellite instability and chromosomal instability are associated with tumorigenesis of ESCC. Chromosomal instabilities are commonly a consequence of chromosomal or chromosome segment abnormalities resulting in DNA copy number changes (CNCs) that occur during in tumor progression. Analysis of the DNA CNC anatomy showed that human cancers can be classified by DNA CNC profiling, because it is non-randomly selected according to the biological backgrounds of the cancer.[5] These CNCs may lead to loss of function in tumor suppressor genes and/or gain of function in oncogenes. Interestingly, high level DNA CNCs (amplification) in tumors are frequently restricted to certain chromosomal regions that contain well-known oncogenes, which are also overexpressed or activated.[6,7] Some oncogenes, such as NMYC, LMYC and GLI, were originally discovered because of their genomic amplification in human tumors.[7] Therefore, the detection and discovery of unidentified or incompletely described CNCs and the relevant genes located within these CNCs can lead to identification of genes putatively involved in growth control and tumorigenesis.

The recently available whole genomic array comparative genomic hybridization (CGH), a high-throughput genomic technology, facilitates the accumulation of high resolution data of the genomic imbalances associated with disease. In this study, we were able to define the regions of gains/amplification and losses in ESCC, and through integration of copy number, we identified the possible candidate target genes that could give insights into the pathology and molecular mechanisms of ESCC. It may therefore provide information relevant to early tumor detection, refined prognosis, and the development of novel targeted therapeutics.

The study included samples from 19 advanced ESCC cases from the Jilin Province in the north-east part of the China, diagnosed according to the WHO classification.[8] The clinical characteristics and risk factors of these samples are summarized in Table 1. Of the 19 cases studied, 18 were from male patients and only one was from a female patient. The mean age of the patients was 57 (range: 37-76) years. The stage of each tumor was classified according to the tumor, node, and metastasis (TNM) classification of the International Union against Cancer[9] and the National Comprehensive Cancer Network (NCCN) Clinical Practice Guidelines in Oncology (http://www.nccn.org/professionals/physician_gls/f_guidelines.asp) as follows: stage I, two cases; stage II, six cases; stage III, eight cases; information for three cases was not available. The histopathological grades of the samples were as follows: grade 1 (well differentiated/low grade squamous cell carcinoma), one case; grade 2 (moderately differentiated/intermediate grade squamous cell carcinoma), eighteen cases; and grade 3 (poorly differentiated/high grade squamous cell carcinoma), none. All patients had negative histories of exposure to either chemotherapy or radiotherapy before surgery, and were not diagnosed with other cancers. Two of the patients had a family history of esophageal cancer. Unfortunately, the information of postsurgical pathological stages was not available. Informed consent was obtained from the enrolled patients with the approval of the ethics committee of the First Hospital of Jilin University (IRB#2011-002). Tumor samples were obtained surgically in the Department of thoracic surgery, at the First Teaching Hospital of Jilin University. Histologically normal esophageal mucosa was surgically removed from the primary tumor regions by experienced pathologists and the primary tumor samples were snap-frozen and stored at -80°C. DNA was isolated from the samples by proteinase K digestion followed by phenol-chloroform extraction according to standard protocols.

IHC studies were performed on formalin-fixed, paraffin embedded (FFPE) slides of ESCC tumor tissues to explore the expression of CTTN and CCND1 according to the manufacturer's protocol using rabbit monoclonal antibodies against CTTN and CCND1 and horseradish peroxidase (HRP) labeled Goat anti-rabbit polyclonal secondary antibody (Abcam plc, Cambridge, MA). Counterstaining was carried out with hematoxylin. The expression score was determined by assessing staining intensity and the percentage of immunoreactive cells. 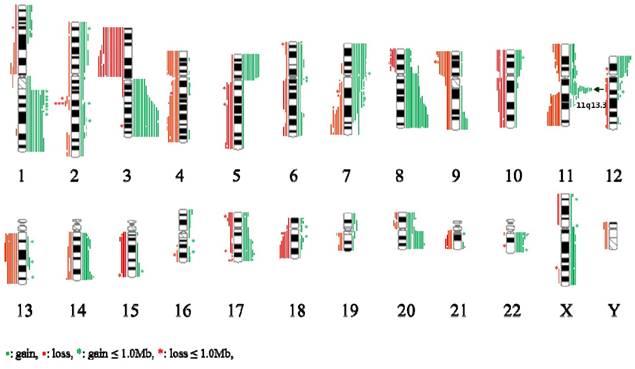 Two interesting possible homozygous losses with a log2 ratio less than -0.4, that are smaller than 1 Mb were identified (Table S2). These loci harbored putative tumor suppressor genes (TSGs) including FHIT and CDKN2.

Overexpression of CTTN (cortactin) and CCND1 (cyclin D1) on 11q13

IHC staining was performed using antibodies against proteins cortactin and cyclin D1 which are encoded by CTTN and CCND1, respectively, on FFPE tissue slides of ESCC as well as of normal esophageal epithelia (Fig 2B and Table 3). The correlation of genomic copy number gain/amplification and protein expression of CTTN and CCND1 genes is summarized in table 3. All 17 cases, that were available for performing IHC studies, exhibited strong CTTN positive staining. The consistency of the genomic CNCs with the protein expression level of CTTN was 76.5% (13/17). Positive staining of CCND1 was observed in eight out of ten cases tested, including one case without genomic copy number gain or amplification, and the consistency of genomic CNC with protein expression levels of CCND1 was found to be 70% (7/10) in the ESCC cases. The normal epithelia of the esophagus showed negative immunoreactions for both CTTN and CCND1. 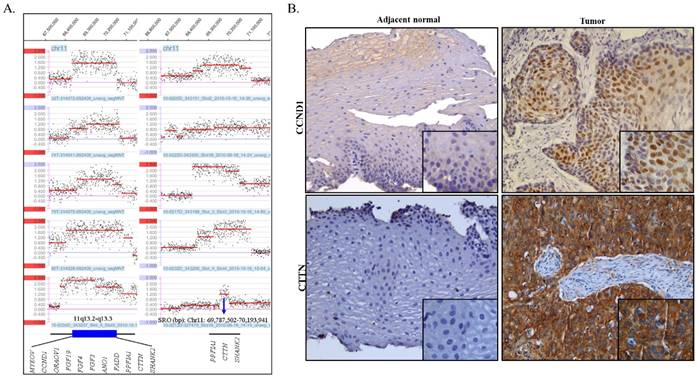 Amplifications were observed in 41 segmental regions, of which 7p11.2 and 11q13.3 were the most repeatedly involved interesting regions (Table S1). Amplification of 11q13.3 was the most prominent finding in our study. A total of 14 cases out of 19 showed copy number gain of 11q13.3. Of these 14 cases with gains, 10 cases showed amplification of different sizes ranging from 406.4 kb to 5.9 Mb (Fig 2A). The various sizes of the 11q13 amplification containing various oncogenes is one of the most frequent amplification events, which is observed in 28-70 % of ESCC cases [22-24] and a significant positive correlation between copy number gain and mRNA expression levels has been reported in this region.[13] Previous studies have especially proposed the important role of CCND1 and CTTN in ESCC.[25,26] Regarding the collaborative function of these two genes, it can be hypothesized that overexpression of CCND1 results in cell proliferation along with overexpression of CTTN, and may facilitate invasive and metastatic behavior in tumor cells. In the present study, subsequent examination of CCND1 and CTTN protein expression levels confirmed that genomic amplification status parallels the increased protein level. Moreover, CTTN amplification is likely the most prominent mechanism of cortactin overexpression encoded by CTTN. Since five cases without genomic amplification also showed high levels of CTTN protein expression, mechanisms other than genomic amplification, such as the CALR-STAT3-CTTN-Akt pathway may also be involved in the upregulation of CTTN expression.[27] It is unfortunate that we were not able to evaluate the statistical significance of the relationship between the amplification/overexpression level of CCND1/CTTN and clinicopathological characteristics such as Tumor, Node, Metastasis (TNM) stage due to limitation of case number and the late stage of cancer in the patient. However, this can be supported by a previous study showing that overexpression of CTTN in ESCC was significantly associated with poor prognosis in patients,[28] suggesting the possibility of CTTN as a valuable marker of ESCC.

Amplification of 7p11.2 harbored an oncogene EGFR, which is one of the tyrosine kinase receptors that is broadly distributed in the human epithelial cell membrane. Amplification and overexpression of EGFR has been reported in ESCC and was significantly associated with a poor prognosis in ESCC patients indicating that it may play an important role in ESCC progression.[29,30]

The possible homozygous losses smaller than 1 Mb that encompass interesting putative tumor suppressor genes (TSG), such as FHIT and CDKN2A were identified (Supplementary Table 2). Additional sequencing analysis of CDK2NA revealed a somatic mutation in exon 2 (c.31_32dupCC;p.S12Lfs*15) leading to a stop codon, in one tumor case (TL 0122) of 19 (Fig S2) without the mutation in adjacent normal tissues. FHIT and CDKN2A are virtually known as the most frequently affected genes after TP53 in the context of homozygous deletion, promoter hypermethylation, loss of heterozygosity (LOH), and point mutations in various human cancers including ESCC.[31-36]

Our study further evidences the important role of CTTN and CCDN1 in 11q13 amplification/expression and the losses of TSGs, such as CDKN2A and FHIT, in advanced stages of ESCC. In future studies, a larger sample size and more early-stage samples are needed to obtain more statistically reliable data and to verify valuable markers for the early detection and targeted therapy of ESCC.

We acknowledge the help of Dr. Zhongxin Yu from Department of Pathology, University of Oklahoma Health Sciences Center for capturing IHC images.

This work was supported by the Basic Science Research Program (NRF-2014R1A2A2A01003566) of the National Research Foundation of Korea (NRF) grant, which is funded by the Ministry of Education, Science and Technology (MEST), Republic of Korea, and Future Planning and Bio-Synergy Research Project (NRF-2014M3A9C4066487) of the Ministry of Science, ICT and Future Planning through the National Research Foundation.