The change in body composition of post-menopausal women is considered a result of long-term interactions among energy intake, energy expenditure, and sex hormonal status or a combination thereof [1, 2, 3, 4,5]. Menopause is frequently associated with increased central (visceral) body fat [6,7], followed by an increasing incidence of hypertension [8] and the aggravation of the lipoprotein profile [9], which lead to metabolic syndrome [10] and the subsequent rise in the incidence of cardiovascular diseases [11]. During menopausal transition, women experience deleterious changes in circulating inflammatory markers and adipokines correlated with increased visceral adiposity [12]. A growing number of evidence has demonstrated that chronic low-grade/subclinical inflammation is a key element in the development of atherosclerotic cardiovascular disease and is closely associated with obesity, insulin resistance, and metabolic syndrome [13,14,15,16].

Dietary protein plays a role in controlling body weight, which is partially attributed to its effects on satiety. Among common dietary proteins, purified collagen hydrolysate has been clinically proven as an effective appetite suppressant that maintains a satiating effect to promote weight loss [17,18]. Insoluble fibrous protein collagen, the single most abundant protein in animals, is the major component of the extracellular matrix and connective tissues. At least 16 types of collagen have been identified in humans; among these, 80%-90% belong to types I, II, and III collagen. Although supplementing with collagens and their derived peptides has been demonstrated to improve cellulite and skin health [19], whether collagen hydrolysate supplementation affects menopause-induced obesity remains unclear.

In the present study, we aimed to investigate the effects of collagen hydrolysate supplementation on estrogen deficiency-induced obesity by using an ovariectomized (OVX) animal model. The body weight, uterus weight, fat mass, and serum biochemical factors of OVX rats were assessed. Adipocyte size was also determined.

All female Sprague-Dawley rats weighing approximately 200 g were purchased from the National Laboratory Animal Center (Taipei City, Taiwan) and maintained under the supervision of the Institutional Animal Care and Use Committee (IACUC) of the China Medical University. Animal experiment protocol was approved by the IACUC and performed in accordance with the guidelines.

For estrogen deficiency-induced obesity and collagen supplementation, 24 rats were divided into 4 groups for sham operation (group 1) and OVX operation (groups 2-4). Operation was performed under Nembutal (Pentobarbital sodium, 50 mg/kg body weight) anesthesia. Groups 1 and 2 were supplied with sterile water. Groups 3 and 4 were supplied with sterile water containing 1.25 mg/mL and 2.5 mg/mL collagen hydrolysate, respectively. All animals were maintained under 12 h/12 h light-dark cycles at controlled temperature (22 ± 0.5 ºC) and humidity (45%-50%). Body weight was measured daily at a specified time during the experiment. At the end of the experiment, blood and perigonadal adipose tissue were immediately obtained after the animals were sacrificed. The dorsal fat and uterus of each rat were dissected and weighed.

The perigonadal adipose tissues were fixed in zinc formaldehyde overnight at 4 °C and transferred into phosphate-buffered saline. The fixed tissues were then embedded into paraffin, sectioned, and stained with hematoxylin and eosin. Digital images were captured at 200× magnitude using an Olympus DX51 light microscope (Tokyo, Japan).

The blood was coagulated by maintaining it at room temperature for 15-20 min, followed by centrifugation for 10 min. The indicated parameters (calcium ions, glucose, inorganic phosphorus, total cholesterol, and triacylglycerol) were measured using a serum biochemistry analyzer (AU400, Olympus, Tokyo, Japan).

Collagen supplementation attenuated weight gain in OVX rats. Therefore, whether supplementation affected adipocyte properties was investigated. Adipocytes in the perigonadal adipose tissue from the OVX rats were clearly enlarged compared with those from the sham-operated control rats (Figure 2A). In addition, high collagen supplementation (2.5 mg/mL) reduced the enlarged adipocyte size in response to OVX treatment (Figure 1A, OVX+2.5C). Parallel with adipocyte size, the change in dorsal fat mass was analyzed. Although the dorsal fat mass in the OVX group appeared to be higher than that in the Sham group, the ratio of dorsal fat mass/body weight was insignificantly altered among the four experiment groups (Figure 2B).

To clarify whether collagen supplementationt regulated lipid metabolism, the levels of blood lipids, total cholesterol, and triacylglycerol were determined. As shown in Figure 3 (upper panel), serum total cholesterol level was slightly regulated in the OVX and OVX with collagen supplement groups (P>0.05). A similar phenomenon was observed in serum triacylglycerol level (Figure 3, lower panel). In addition to blood lipids, other blood biochemical factors were monitored. The levels of serum calcium, phosphorus, and glucose were not altered in response to OVX treatment or OVX with collagen supplements (Figure 4). 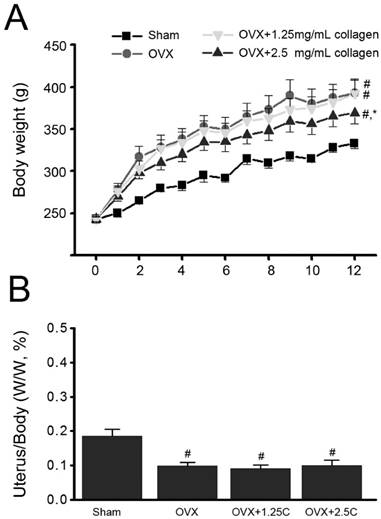 Effects of collagen supplement on adipocyte size and dorsal fat content. Rats were sham-operated or OVX, and then the OVX-rats were supplied with water containing collagen (1.25 and 2.5 mg/mL, 1.25C and 2.5C) or not. After 12 weeks, the rats were weighed, and then sacrificed to obtain periuterine adipose tissue and dorsal fat. (A) After H&E staining, the adipocytes were observed by using light microscope (200x). (B) Dorsal fat samples were collected and weighed. 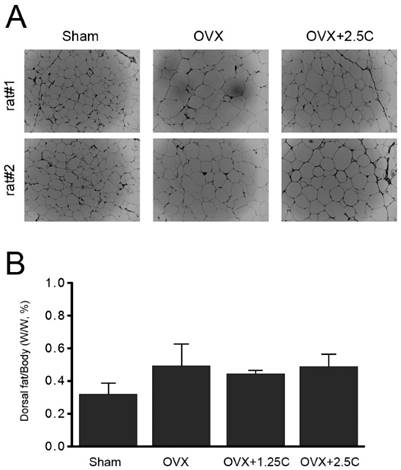 Collagen supplement insignificantly affected blood lipids. Rats were sham-operated or OVX, and then the OVX-rats were supplied with water containing collagen (1.25 and 2.5 mg/mL, 1.25C and 2.5C) or not. After 12 weeks, blood samples were obtained for determination of serum total cholesterol and triacylglycerol. n.s., no statistical significance as compared to Sham or OVX. 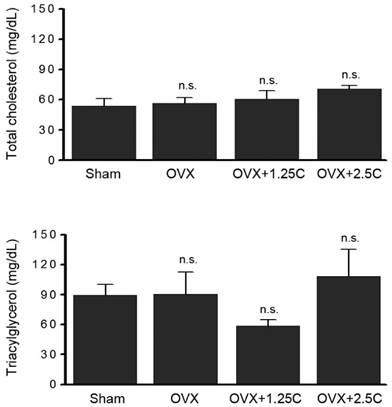 Collagen supplement insignificantly affected blood lipids. Rats were sham-operated or OVX, and then the OVX-rats were supplied with water containing collagen (1.25 and 2.5 mg/mL, 1.25C and 2.5C) or not. After 12 weeks, sera were obtained for determination of calcium, phosphorus and glucose level. n.s., no statistical significance as compared to Sham or OVX. 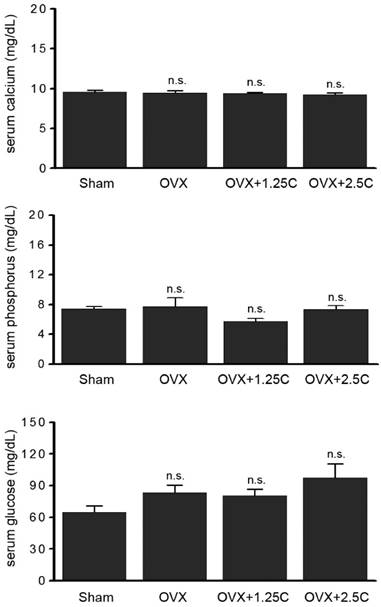 A previous study has reported that protein intake can prevent muscle mass loss associated with weight loss in obese older women [25]. Another study reports that using gelatin as a single diet protein results in appetite suppression in adults, which is more significant than using casein [26]. A recent review that investigated the effects of dietary protein intake on body composition changes also indicates that consuming high-protein diets contributes to the maintenance of lean mass and the loss of fat mass during weight loss in older adults [27]. Our findings indicate that supplementing with collagen hydrolysate, the digested gelatin, attenuates body weight gain and adipocyte enlargement in OVX rats. Collagen hydrolysate supplementation may not only alleviate menopause-induced obesity but also ameliorate muscle mass maintenance during menopause.

In obesity model animals, the association of abnormal fat mass has not been precisely investigated. [28] reported that fat mass was higher in obese, diabetic, leptin-resistant Zucker rats than in their homozygous lean controls. OVX treatment in rodents also leads to weight gain and fat deposition, whereas estradiol treatment restores these changes [29,30]. Our results show that collagen supplementation exhibits bioactivity in reducing body weight and adipocyte size similar to that of estradiol treatment. Thus, collagen supplementation may synergically act with estradiol to reduce the use of estradiol and consequently alleviate its side effects.

3. Shinoda M, Latour MG, Lavoie JM. Effects of physical training on body composition and organ weights in ovariectomized and hyperestrogenic rats. International journal of obesity and related metabolic disorders: journal of the International Association for the Study of Obesity. 2002;26(3):335-343

18. Nieuwenhuizen AG, Hochstenbach-Waelen A, Veldhorst M A. et al. Acute effects of breakfasts containing alpha-lactalbumin, or gelatin with or without added tryptophan, on hunger, 'satiety' hormones and amino acid profiles. The British journal of nutrition. 2009;101(12):1859-1866