Objectives: Diabetic retinopathy (DR) is a common microvascular complication in both type I and type II diabetes. Several previous reports indicated the serum centration of some secretary factors were highly associated with DR. Therefore, we hypothesis regulatory SNPs (rSNPs) genotype in secretary factors may alter these gene expression and lead to DR.

Methods: At first, pyrosequencing were applying to screen the SNPs which present allele frequency different in DR and DNR. Then individual genotyping was processed by Taqman assays in Taiwanese DR and DNR patients. To evaluate the effect of SNP allele on transcriptional activity, we measured promoter activity using luciferase reporter constructs.

Conclusion: Our data proposed rs2010963-C altered the expression level of VEGFA in different tissues. We suggested small increase but long term exposure to VEGFA may lead to DR finally.

Diabetic retinopathy (DR) is a common microvascular complication of diabetes and causes new cases of blindness among adults [1, 2]. It begins with mild nonproliferative abnormalities, follows by moderate and severe nonproliferative DR (NDR), and finally progresses to proliferative DR (PDR) [1, 2]. Almost all patients with type 1 diabetes and more than 60% of patients with type 2 diabetes are expected to develop retinopathy during the first decade of occurrence of diabetes [3, 4]. With the incidence of diabetes increasing in the world, the incidence of DR is expected to rise to alarming levels [5]. Diabetes duration, poor glycemic control, and hypertension are known as the primary risk factors for development of DR [5, 6]. However, some patients were found in clinical observation that had poorly controlled or long lasting duration diabetes but did not develop retinopathy, whereas others even with relatively good glycemic control developed advanced retinopathy eventually [7]. These clinical observations suggested there are other factors involved in the development of DR.

Recent studies suggest that genetic factors are important for DR. For example, a family study of Mexican-Americans with type 2 diabetes found that severe retinopathy in the proband is significantly associated with severe retinopathy in siblings [8]. A study of identical twins found a concordance for DR in 68% of type 1 and 95% of type 2 diabetes cases [9]. To explore the candidate genes associated with DR, several genome-wide associated studies were conducted to detect potential regions involved in the etiology of DR [10, 11]. By gene approach studies, several potential candidate genes in DR has been reported such as receptor for advanced glycation end products (RAGE) [12, 13], vascular endothelial growth factor (VEGF) [14-17], erythropoietin (EPO) [13, 18] and pigment epithelium derived factor (PEDF) [13]. However, these studies were not reproduced in multiple populations and molecular mechanism still remain unconfirmed.

Single nucleotide polymorphism (SNP) is a DNA sequence variation occurring commonly within a population. This change in the DNA sequence may affect the process of gene expression if they occur in the putative regulatory region [19, 20]. In several previous reports, the serum centration of some DR associated genes were highly associated with DR [21-27]. Therefore, we hypothesis regulatory SNPs (rSNPs) genotype may alter gene expression of DR associated secretary factors.

The study protocol was approved by the Research Ethics Committee of Taipei City Hospital (TCHIRB-990501, TCHIRB-1000103, and TCHIRB-1020404) and adhered to the tenets of the Declaration of Helsinki. Written informed consent was obtained from all participants before their enrollment. Eighty-four patients who had type 2 diabetes mellitus for more than 10 years (as defined by age of onset being later than 30 years of age) and exclusively used oral hypoglycemic agents were enrolled between time duration from the patient population of the Taipei City Hospital Zhongxing Branch. The criteria for diagnosis of diabetes were random blood sugars levels of over 150 mgs% and HbA1C levels of over 6%. A comprehensive ophthalmological examination included corrected visual acuity, slit-lamp biomicroscopy, and dilated fundus photography. Seven fields of 30°color fundus photographs with stereoscopic images of the optic disc and macula were taken through the dilated pupils of each patient, using a digital fundus camera (Kowa, Japan). Patients with no signs of diabetic retinopathy coupled with type 2 diabetes mellitus were assigned to the DNR study group. Patients with significant diabetic retinopathy as defined by eyes with definite neovascularization and/or vitreous/preretinal hemorrhages/microaneurysms were included in the DR study group.

We constructed four reporter plasmids encompassing - 1272 to - 225 bp of the VEGFA promoter (+1 relative to the first nucleotide of transcription start site) which could represent the genotypes of rs2010963. The rs2010963-C was obtained by PCR from using HEK293T cell DNA. The PCR products of the VEGFA promoter were ligated into pGL4 (Promega, Madison, WI). To avoid interference from other SNPs in the VEGFA promoter region, we constructed the rs2010963-G reporter vector using the point mutation kit (Agilent, Santa Clara, CA). After incubation for 24 h, cells which transfected with reporter plasmid were collected and analyzed for luciferase activity with Dual-Luciferase Reporter Assay System (Promega, Madison, WI).

We used the Golden Helix Package (Golden Helix, Inc., Bozeman, MT) for the statistical analysis of genotypes. The chi-square test was applied to compare discrete variables. The results were shown as hazard ratio and 95% confidence interval (CI). We considered P-values below 0.05 as statistically significant.

We selected nine secretary factors as our candidates for their serum centration has been reported to associate with DR in previous reports [21-27]. To explore the relation for the rSNP and the secretary factors, the SNPs which located on promoter region and minimal allele frequency > 10% in Mongoloid (information from dbSNP (http://www.ncbi.nlm.nih.gov/SNP/) were selected as screening candidates (Table 1). Pyrosequencing technology was applying for rSNP screening for it could determine the SNP allele frequencies in DNA pools [28]. Taiwanese patients with type 2 diabetes and with or without any signs of DR were allocated to DR and DNR groups, respectively. Equal amount of genomic DNA from DR or DNR patients were equally mix as DR or DNR pools for pyrosequencing (Fig. 1A). We observed two SNPs (rs1570360 and rs2010963) presented about 10 % allele frequencies different between DR and DNR groups (Fig. 1B).

Effect of the rs2010963 polymorphism on transcriptional activity

Dominant and recessive model analysis of rs2010963 in DR and DNR groups. 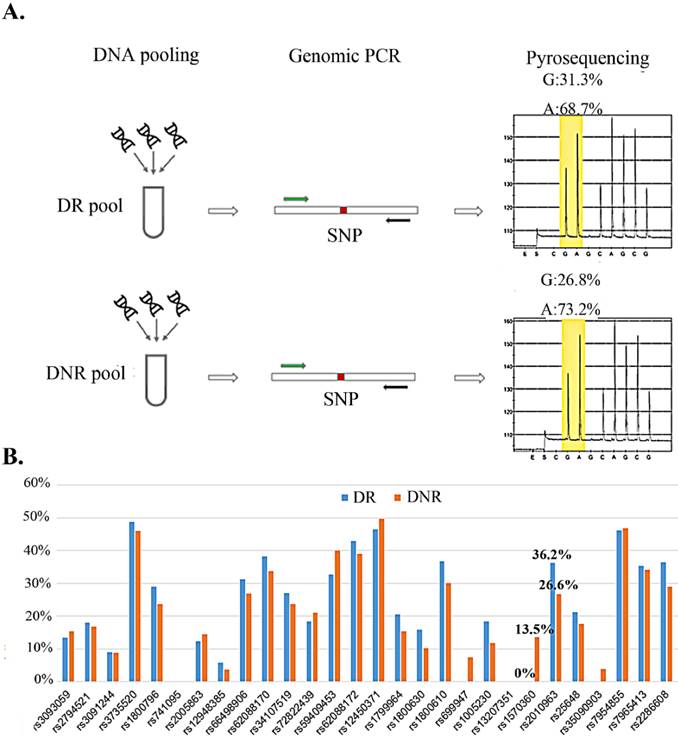 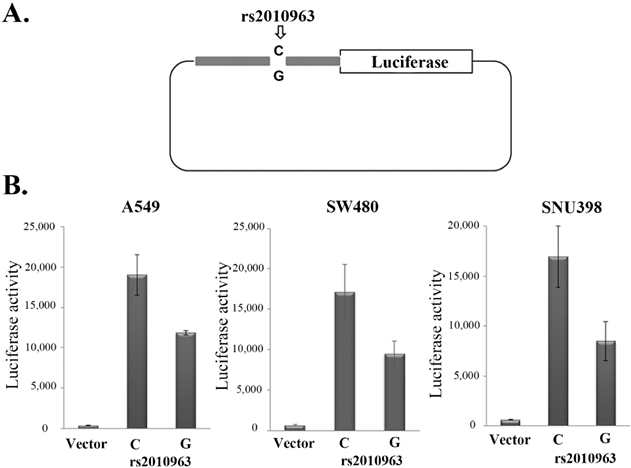 In this study, we analyzed the association of 29 rSNPs which selected from 9 DR associated secretary factors in an independent cohort of Taiwanese patients with type two diabetes. At first, pyrosequencing analysis the allele frequency showed rs1570360 and rs2010963 present about 10% different allele frequency between DR and DNR pools. Individual genotyping of all our patients indicated rs2010963-C allele significant association with DR. Furthermore, our luciferase reporter assay showed the rs2010963-C allele could enhance the expression of VEGFA.

VEGF encompasses wide family of growth factors including VEGF-A,-B,-C,-D,-E, and placental growth factor (PGF) [32]. The best known and most widely used in clinical practice is VEGFA. VEGFs promote angiogenesis, cause the breakdown of the blood retinal barrier, stimulate the growth of endothelial cell, induce neovascularization, and increase vascular permeability in the ischemic retina [6, 33, 34]. Increased expression levels of VEGF and its receptors have been observed in DR patients [35, 36]. Therefore, several anti-VEGF agents are developed to treat DR such as pegaptanib, ranibizumab, and bevacizumab [37-39]. For the expression of VEGFA is important for the progression of DR, SNPs of VEGFA have been analyzed in several associated studies [14, 16, 34, 36, 40].

Chromatin immunoprecipitation followed by sequencing (ChIP-seq) is an effective method to analyze the interaction of protein and DNA. The Encyclopedia of DNA Elements (ENCODE) project (https://genome.ucsc.edu/ENCODE/) has performed more than 500 ChIP-seq experiments for hundreds transcription factors in several cell lines. Base on the CHIP-seq data from ENCODE project, 12 transcription factors binding fragments were crossed the region of rs2010963 (sup Fig.1). One of the transcription factors, TBP (TATA box binding protein), has been indicated to correlate with the expression of VEGFA in previous report [41]. In addition, our luciferase reporter assay provides direct evidence that rs2010963-C altered the expression level of VEGFA in 3 cell lines from different tissues. As we know VEGFA is a secreted factor and expressed in almost all the tissues [42]. Even though our data showed that rs2010963-C increase 1.6 to 2 folds relative to rs2010963-G, it still could be possible to lead to DR by long term exposure.

In summary, our study suggests that rs2010963 is an important genetic marker for DR in Taiwanese patients with type two diabetes. Moreover, our experiments provide a direct association between rs2010963-C and serum levels of VEGFA.