The antisense strategy is an established approach to specifically inhibit target gene expression and has been tested in vitro and in vivo [1, 2].

NOX2, known as gp91phox, was first discovered in neutrophils and macrophages [3] and was described later in nonphagocytic cells, including neurons [4], skeletal muscle myocytes [5], hepatocytes [6], endothelial cells [7-9], hematopoietic stem cells [10], and cardiomyocytes [11]. It has been confirmed that NOX2 was expressed in the cardiomyocytes in human heart and increased in the acute myocardial infarction in cardiomyocytes in patients [11-12].

The function of NOX2 is to produce superoxide, which is the major source of reactive oxygen species (ROS) [13]. ROS is a physiological byproduct in normal cellular aerobic metabolism. However, it acts as an oxidative stress marker that is increased under pathologic condition [14-16]. It has been demonstrated that hypoxia also induces ROS generation in myocardium. ROS stabilizes HIF-1 α in ischemic heart disease. The phenomenon was seen in patients with elevated HIF-1 α expression and ROS production [17, 18].

Here we focused on the hypothesis that NOX2 antisense can specifically attenuate cardiomyocyte apoptosis through the inhibition of hypoxia-induced increase in ROS production. To date, there is no NOX specific inhibitor existing although some inhibitors, such as Diphenylene iodonium [19], Apocynin [20], 4-(2-Aminoethyl)benzenesulfonylfluoride (AEBSF) [21], and Neopterin [22] were used to inhibit NOX enzymes.

Construction of adenovirus with rat NOX2 anti-sense (ADV-NOX2 -AS)

The NOX2 fragment (nt265-nt1312) was inserted into Adeno-X-viral DNA expression vector (BD Clontech) in reverse orientation. After digestion with I-CeuI and PI-SceI, ADV-NOX2 AS was packaged in HEK 293 cells (Fig. 1) and ADV-LacZ (BD Clontech) was used as the control vector.

The cells were grown in CM for24 hours and then transduced with ADV-LacZ and ADV-NOX2-AS respectively at multiplicity of infection (MOI) 50, continuously cultured for 36 hours, and then induced hypoxia for 24 hours. These cells were used for all the experiments in this study.

A total of 10 ng of RNA was used to amplify NOX2 and HIF-1 α cDNAs with reverse transcriptase III. PCR was performed with PCR cycler (Bio Rad) using NOX2 primers: 5'-GGGCTGAATGTCTTCCTCTTT-3' (forward) and 5'-GGTACTGGGCACTCCTTTATTT-3' (reverse) (IDTDNA); HIF-1 α primers: 5'-GGAAATGCTGGCTCCCTATATC-3' (forward) and 5'-GCTGTGGTAATCCACTCTCATC -3' (reverse) (IDTDNA); Rat β-actin as the control (Forward: 5'-CAACTGGGACGATATGGAGAAG-3', reverse: 5'-CTCGAAGTCTAGGGCAACATAG-3') (IDTDNA). PCR program was carried out for 30 cycles. Each cycle consisted of 30s of denaturation at 94°C, 40s of annealing at 62°C, and 60s of extension at 72°C, followed by a final 7-min extension at 72°C. 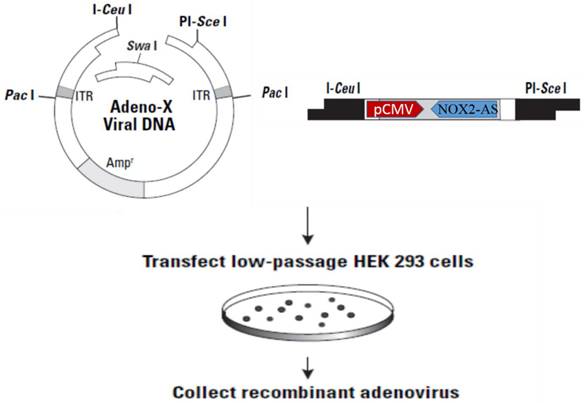 The cells were harvested and lysed with RIPA buffer (cell signal) for 30min on ice, then homogenized for 10s. The supernatant was obtained by centrifugation at speed 12,000g for 15min at 4°C. A small volume of lysate was removed to perform a protein quantification assay. Determine the protein concentration for each cell lysate using BCA/microplate reader (Bio-Rad). The same amount of protein was loaded onto SDS-protein gel (4-20%, Genescript). The protein was transferred onto nitrocellulose. After blocking with 5% BSA/TBS-T for one hour at room temperature, the membrane was then probed with mouse anti-NOX2 (BD Bioscience) or rabbit anti-HIF-1 α (abcam) primary antibody at 4°C overnight. After three washes with TBS-T, the secondary antibody, goat-anti mouse IgG-HRP (Santa Cruz) for mouse anti-NOX2 or goat-anti rabbit IgG-HRP (Santa Cruz) for rabbit anti-HIF-1 α was used respectively for developing in enhanced chemiluminescent (ECL) substrate (LifeTech).

DHE staining was performed according to Richard et al. [27]. Briefly, batch-cultured cells on chamber slides were rinsed with cold PBS, applied with DHE (10 µg/ml), and then incubated for 15min at 30 °C in dark. DHE was observed under fluorescence microscope. In DHE-flow cytometry assay, the cells were harvested by trypsin digestion, rinsed with cold-PBS, and then probed with DHE (10 µg/ml) for 15min at 30 °C in dark. The extra DHE was washed out by spinning down in cold-PBS, and the DHE-stained cells were re-suspended in cold-PBS for flow cytometry.

Apoptosis was evaluated using Annexin V-FITC Apoptosis Detection Kit (abcam). Immediately after initiating apoptosis, cells translocate the membrane phosphatidylserine (PS) from the inner face of the plasma membrane to the cell surface. Once on the cell surface, PS can be easily detected by staining with a fluorescent conjugate of Annexin V, a protein that has a high affinity for PS. The FITC-positive cells were counted by flow cytometer.

The batch-treated cells were harvested and rinsed once with cold-PBS, and the cell pellet was re-suspended in 200 μl of lucigenin (10 μM,sigma) and incubated at room temperature for 20 min in dark. The basal level of NADPH oxidase activity was measured. A total of 5μl of NADPH (100 μM, sigma) was added, and its oxidase activity was continuously measured every 2 min for 5 times. The unit was expressed in RUL/min·cell.

NOX2 is a transmembrane protein with molecular weight about 90kda. Western blot (Fig. 2 A) and In situ immunocytochemistry (Fig. 2 C) data showed that NOX2 protein and hypoxia-inducible factor (HIF-1α) were increased in hypoxia cells transfected with ADV-LacZ (Hypoxia-ADV-LacZ) compared with normoxia cells transfected with ADV-LacZ (normoxia-ADV-LacZ). Expectedly, both NOX2 and HIF-1 α proteins were reduced in ADV-NOX2-AS-treated hypoxia (hypoxia-ADV-NOX2-AS) cells compared with hypoxia-ADV-LacZ. The mRNA levels of NOX2 (712bp) and HIF-1 α (698bp) were also increased in hypoxia-ADV-LAcZ treated cardiomyocytes compared with the normoxia-ADV-LacZ treated cells. However, ADV-NOX2-AS attenuated the hypoxia-induced increase in NOX2 and HIF-1 α mRNA (Fig. 2B). The β-actin (442bp) served as a control mRNA remained no change. 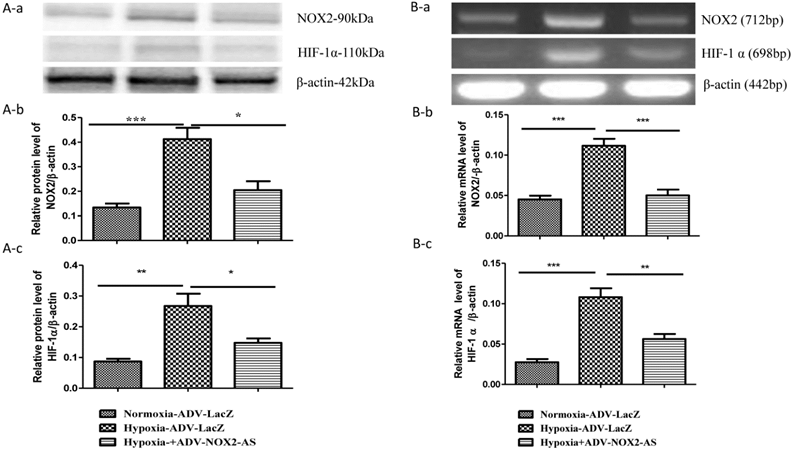 In the present study, NADPH oxidase activity was measured using lucigenin-enhanced method. The result showed that ADV- NOX2-AS blocked hypoxia-induced superoxide generation in cardiomyocytes (Fig.3A). DHE, by virtue of its ability to freely permeate cell membranes, is used extensively to monitor superoxide production [28-30]. Upon reaction with superoxide anions, DHE forms a red fluorescent product (ethidium) which intercalates with DNA [31, 32]. DHE is perhaps the most specific dye for detection of essentially superoxide radicals, but may be affected by cell DNA content [33]. Cell DNA was extracted using genomic DNA isolation kit (Qiagen). The content of DNA was measured with NanoDrop spectrophotometer (Bio-Rad). There was no difference between ADV-LAcZ and ADV- NOX2-AS treated cells (data not shown). Interestingly, the ethidium content was increased in hypoxia-ADV-LacZ treated cardiomyocytes compared with the control cells treated with normoxia-ADV-LacZ. While in hypoxia-induced cardiomyocytes transduced with ADV-NOX2 -AS, the ethidium content remained no change (Fig.3B).

Cells initiate intracellular apoptotic signaling in response to a stress, which may bring about cell suicide. The apoptosis was evaluated by flow cytometry (Annexin V stained) and TUNEL assay. Figure 4 demonstrated that hypoxia increased apoptosis in cardiomyocytes, while NOX2 -AS protected the cells from hypoxia-induced apoptosis. 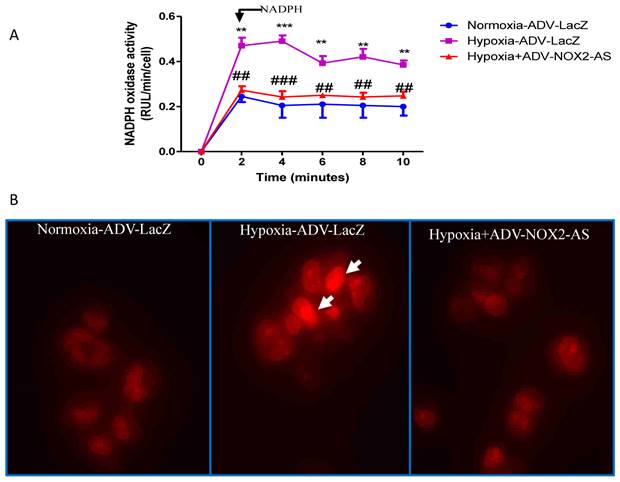 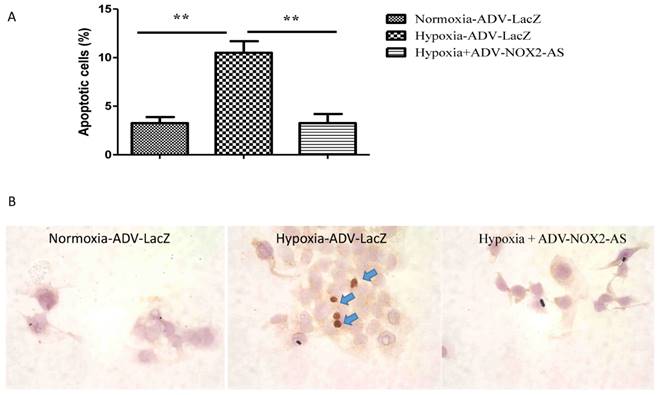 In this study, we clearly demonstrated that adenovirus delivery of rat NOX2 antisense prevented hypoxia-induced increase in NOX2 expression in rat cardiomyocytes. It has been reported that intermittent hypoxia (IH) caused increase in NOX2-derived ROS generation and thus cardiovascular morbidities [34]. In human ischemic heart failure, NAD(P)H oxidase-linked ROS activity was elevated [35], indicating that ROS plays an important role in ischemic myocardium infarction. In this study, we mimicked heart ischemia using Cobalt Chloride hexahydrate in order to induce hypoxia in rat cardiomyocytes. Again, superoxide, a major source of NOX-derived ROS, and NAD(P)H activity were in hypoxia rat cardiomyocytes. NOX2 antisense attenuated the increase in superoxide generation and NADPH activity, suggesting that NOX2 is a critical factor involving in ischemic myocardium infarction.

Adenovirus (ADV) is a family of DNA viruses that can infect both dividing and non-dividing cells. ADV vector is a powerful tool for in vitro study of gene therapy. The cells infected with recombinant adenovirus can express the therapeutic gene but, because essential genes for viral replication are deleted, the vector cannot replicate [37]. However, these vectors can infect cells in vivo to express high levels of the exogenous gene. Unfortunately, this expression only lasts for a short time (5-10 days post-infection) [37]. The adeno-associated virus (AAV) is also a suitable vector for long term in vivo study [38]. We will use AAV vector for the following in vivo study.

In summary, ADV-NOX2-AS successfully inhibited hypoxia-induced oxidative stress and apoptosis in cardiomyocyte in vitro. This finding indicates that NOX2 may be a targeting candidate for the therapies in heart ischemia diseases.

The prevalence of cardiovascular diseases has increased worldwide. This study yields 2 significant findings in the prevention of hypoxia related heart ischemia. First, hypoxia induces the generation of oxidative stress and cardiomyocyte apoptosis. Second, inhibition of NOX2 expression attenuates oxidative stress and cardiomyocyte apoptosis in hypoxia-induced cardiomyocytes. These findings suggest that NOX2 may play a critical role in heart ischemia and that inhibition of NOX2 may be a potential therapeutic strategy for heart ischemic diseases.

This study was supported by the National Natural Science Foundation of China (81500181).

9. Li JM, Shah AM. Intracellular localization and preassembly of the NADPH oxidase complex in cultured endothelial cells. The Journal of biological chemistry. 2002;277:19952-60

27. Dinnen RD, Mao Y, Fine RL. The use of fluorescent probes in the study of reactive oxygen species in pancreatic cancer cells. Methods in molecular biology. 2013;980:321-9

30. Rivera A, Maxwell SA. The p53-induced gene-6 (proline oxidase) mediates apoptosis through a calcineurin-dependent pathway. The Journal of biological chemistry. 2005;280:29346-54