Objective: Oral squamous cell carcinoma (OSCC) is the most common malignancy of head and neck with high mortality rates. The mechanisms of initiation and development of OSCC remain largely unknown. Dysregulated alternative splicing of pre-mRNA has been associated with OSCC. Splicing factor SRSF3 is a proto-oncogene and overexpressed in multiple cancers. The aim of this study was to uncover the relationship between SRSF3 and carcinogenesis and progression of oral squamous cell carcinoma.

Conclusion: Our results suggested that SRSF3 is associated with the initiation and development of OSCC and may be a biomarker and therapeutic target of OSCC.

Oral squamous cell carcinoma (OSCC) is the most common malignancy of head and neck. [1]. The mortality rates of OSCC are still high despite progress of treatment and diagnosis in the past decades [2]. It is urgently required to uncover the mechanisms of initiation and development of OSCC. It has been demonstrated that dysregulated alternative splicing of pre-mRNA is associated with OSCC [3, 4]. Several splicing factors have been shown to be involved in the tumorigenesis of OSCC [5, 6].

SR proteins (serine/arginine-rich proteins), functioning as messenger-RNA-binding proteins and alternative splicing factors, all contain one or two RNA recognition motif(s) (RRM) and a protein-interaction arginine-serine rich (RS) domain [7]. SRSF3 (serine/arginine-rich splicing factor 3), also known as SRp20 or SFRS3, is the smallest member of SR proteins [8]. SRSF3 is a multi-functional protein. It has been shown to be involved in multiple cellular functions, such as alternative splicing [9, 10], DNA repair [11], RNA export [12, 13], alternative RNA polyadenylation [14], and protein translation [15, 16]. SRSF3 has been found to be involved in a number of human diseases, including cancer [17]. It has been demonstrated to be a proto-oncogene and often overexpressed in multiple cancers, including OSCC [18, 19]. However, the relationship between SRSF3 and carcinogenesis and caner progression remains unclear.

In this study, we analyzed the expression of SRSF3 in oral precancerous and cancerous tissues. We found that SRSF3 is overexpressed in oral cancer and moderate or severe dysplasia tissues. Patients with high grade cancer or lymphatic metastasis showed up-regulated expression of SRSF3.

FaDu cells (ATCC) were cultured in Dulbecco's modified Eagle medium (DMEM) supplemented with 10% fetal bovine serum (FBS; HyClone, USA) and 1% antibiotic-antimycotic (Invitrogen, USA). SRSF3 siRNA#1 and #2 were purchased from Santa Cruz Biotechnology and Ambion, respectively. FaDu cells were transfected with 20nM siRNA in the presence of Lipofentamine 2000 (Invitrogen, USA) according to the manufacturer's instructions. After 48h, cells were passed and received another transfection. After 96h, total proteins were collected by adding 2× sodium dodecyl sulfate sample buffer, and boiled for 5 min. Total RNAs were purified by TRIzol reagent (Invitrogen, USA).

Seventy-seven patients diagnosed as oral squamous cell carcinoma and eleven patients diagnosed as epithelial dysplasia were involved in this study. All histologic diagnoses were performed by the pathology department in the School and Hospital of Stomatology, Wuhan University. Normal oral mucosal tissues were obtained from non-tumor adjacent tissues or patients with reshaping of gingival tissues. Informed consent was obtained from all subjects. All experimental protocols were approved by the Ethics Committee at the School and Hospital of Stomatology in Wuhan University.

Oncomine is an online cancer microarray database [21]. There were nine analyses of oral squamous cell carcinoma vs normal control samples, and one salivary gland cancer vs normal control until Oct 30, 2015. A meta-analysis was used to compare the expression levels of SRSF3 between cancer and normal samples.

Total RNA was treated with DNase I (Invitrogen), and then reverse-transcribed using random hexamers at 37°C with the M-MLV reverse transcriptase (Promega, Madison, USA). Real-time quantitative RT-PCR was performed using SYBR Green (GeneCopoeia, USA) in a Real-time PCR machine (QuantStudio 6 Flex System, Applied Biosystems, Foster City, CA). Primers for qRT-PCR are synthesized based on the publication [22], except N-cadherin forward primer (5' CCACCTACAAAGGCAGAAGAGA 3'). GAPDH was used as a reference and amplified with following primer pairs: 5'GAAGGTGAAGGTCGGAGTC 3' and 5' GAAGATGGTGATGGGATTTC 3'. The relative levels of gene expression were calculated as ΔCt = Ct(gene) - Ct(reference). The 2-ΔΔCt method was used to calculate the fold-change of gene expression.

The scores of SRSF3 were compared between groups using the nonparametric Mann-Whitney U-test or Kruskal-Wallis test in SPSS software. p<0.05 was considered statistically significant. For real-time qRT-PCR, two group statistical comparisons of means were calculated with student's t-test.

The expression of SRSF3 in OSCC and Dysplasia

Expression of SRSF3 in normal, dysplasia, or OSCC tissues.

Correlation of SRSF3 expression with the grading of oral epithelia dysplasia. 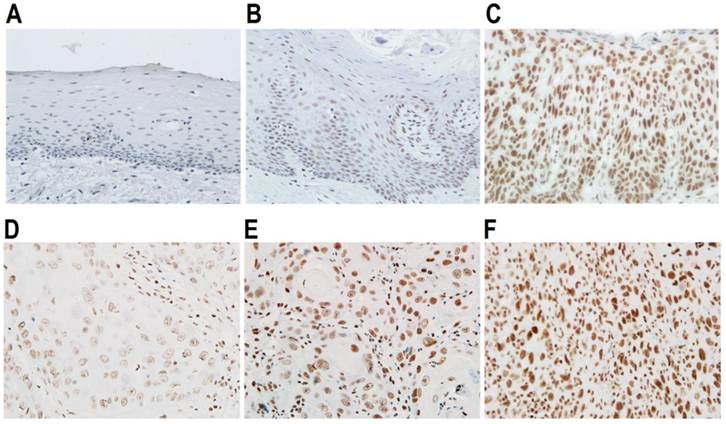 Correlation of SRSF3 expression with clinicopathologic characteristics of OSCC patients. 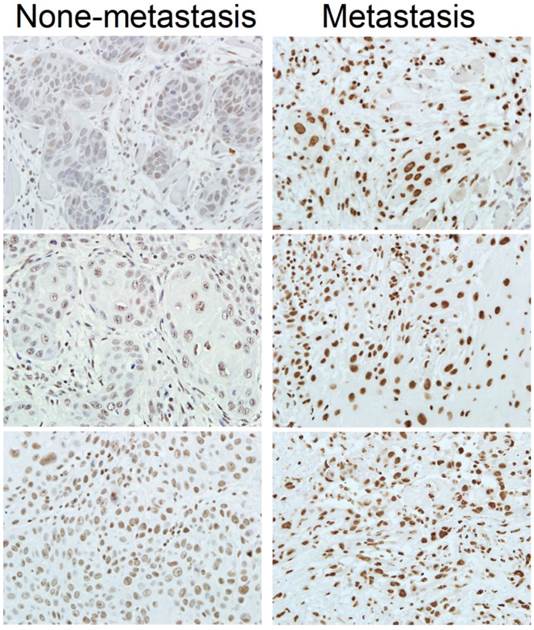 SRSF3 expression is associated with clinicopathologic characteristics of OSCC patients

Metastasis is one of the major factors causing the death of cancer. We found that patients with lymphatic metastasis showed significantly higher SRSF3 expression than those without lymphatic metastasis (p=0.038) (Table 3, Figure 2). This result suggested that SRSF3 might be also involved in metastasis.

Epithelial-mesenchymal transition (EMT) has been proposed to initiate the metastasis of cancer cells [23, 24]. We investigated the effect of SRSF3 on the expression of EMT related-genes. We knocked down SRSF3 in FaDu cells (a head and neck cancer cell line with metastasis characteristics) with two siRNAs targeting different regions of SRSF3 mRNA (Figure 3B). The expression levels of Slug and N-cadherin significantly decreased after SRSF3 knockdown (Figure 3A). No significantly changes were found in the expression levels of VIM, Snail1, Twist, and E-cadherin. These results indicated that SRSF3 might participate metastasis via regulating the expression of Slug and N-cadherin.

Smoking and drinking are general risk factors of carcinogenesis. We found that there is no significant difference in the expression of SRSF3 level between smoking and non-smoking or between drinking and non-drinking patients (Table 3). SRSF3 may be a relative independent factor during carcinogenesis. In addition, there was no correlation between SRSF3 and age or sex of patients (Table 3).

Carcinogen increased the expression of SRSF3

SRSF3 is up-regulated in moderate or severe dysplasia tissues. Many carcinogens are capable to induce dysplasia. Therefore, we analyzed the effect of carcinogen DMBA on the expression of SRSF3. Primary cultured oral epithelial cells had much lower level of SRSF3 than CAL 27 cells (an oral cancer cell line) (Figure 4). When primary cultured oral epithelial cells were exposed to DMBA for two days, SRSF3 expression level significantly increased. This result suggested that carcinogen might be the cause of overexpression of SRSF3.

SRSF3 regulates the expression of epithelial-mesenchymal transition (EMT) related-genes. FaDu cells were treated with siRNA twice in an interval of 48 hours. (A) The expression of E-cadherin (E-cad), Slug, Twist, Snail and Vimentin (VIM) was analyzed by real-time quantitative RT-PCR. GAPDH served as the reference. (B) Western blot showed knockdown efficiency of SRSF3 in FaDu cells. GAPDH served as loading control. 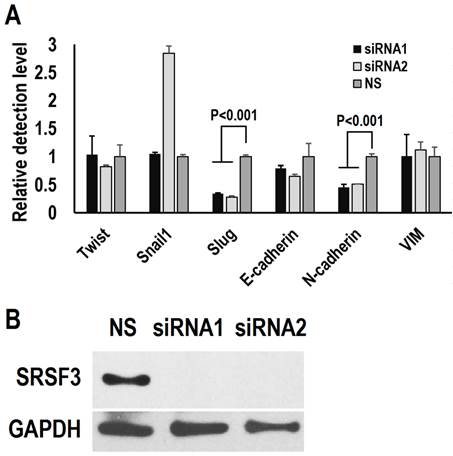 Oral squamous cell carcinoma, encompassing more than 90% of oral tumors, counts among the most frequent malignancies of head and neck [1]. Five-year relative survival rate (%) of oral cancer patients, diagnosed between 2003 and 2009, is 65%, which is much lower than those of breast cancer patients and prostate cancer patients [2]. An important reason for poor treatment outcome of OSCC is the poor understanding of its tumorigenesis. OSCC is associated with aberrant alternative splicing of pre-mRNA due to overexpression of splicing factor hnRNP A1 [6]. Here, we focused on another key splicing factor, SRSF3, and expanded our knowledge of how splicing factor is associated with OSCC.

Previous studies showed that SRSF3 is overexpressed in cancers of the cervix and ovary [18, 25]. Recently, in consistent with previous studies, we found that SRSF3 is overexpressed in OSCC cells [19]. Here, we also found that SRSF3 was overexpressed in OSCC tissues based on a meta-analysis of oral cancer researches in Onocmine microarray database. In this study, we further investigated the relationship between SRSF3 expression and clinical characteristics of OSCC patients. Because most of our samples are formalin-fixed, paraffin-embedded tissues, we only performed immunohistochemistry to analyze the expression of SRSF3 in patients instead of qRT-PCR or Western blot. We found that SRSF3 is up-regulated in moderate or severe dysplasia tissues compared with normal oral mucosal epithelial tissues, and higher grade cancers express more SRSF3. Our data clearly showed gradually increased expression of SRSF3 is associated with the development of precancerous lesions and cancer. SRSF3 may be a new potential molecular marker for OSCC.

Overexpression of SRSF3 in an immortalized mouse embryonic fibroblast has been demonstrated to be able to initiate tumor formation [18]. We found that carcinogen DMBA significantly increased the expression of SRSF3 in normal oral primary epithelial cells. In addition, moderate or severe dysplasia tissues showed significantly higher SRSF3 than normal tissues. These results are correlated with previous study and strongly suggest that SRSF3 may be involved in the initiation of OSCC and be a therapeutic target for the prevention of OSCC.

N-cadherin has been shown to be associated with anti-apoptotic signaling pathways [30]. Its transcription is activated by Twist [31]. Our results showed decrease of N-cadherin and no change in Twist upon SRSF3 knockdown. This may suggest that SRSF3 regulates the expression of N-cadherin via Twist-independent pathway.

Alternative splicing has been increasingly associated with cancers [32]. SR splicing factor family (such as SRSF3 [18] and SRSF1 [33]) and SR-related proteins (such as Tra2β) [34] have been concluded to be oncogene or closely associated with oncogenesis. However, the relationship between these splicing factors and carcinogenesis and caner progression remains largely unclear. In the present study, we provided more evidences about how SRSF3 is correlated with progression of OSCC. Further studies may focus on the therapeutic strategies targeting SRSF3 in cancers.

In conclusion, we found that SRSF3 is overexpressed in OSCC tissues and associated with the initiation and development of precancerous lesions and cancer. SRSF3 may be a biomarker and therapeutic target of OSCC.