Perforation of floor of the dental pulp is often encountered during root canal treatment in routine clinical practice of dental caries. If perforation were large, granulation tissue would grow to form periodontal polyp. Granulation tissue consists of proliferating cells however their origin is not clear. It was shown that the cells in granulation tissue are mainly from migration of undifferentiated mesenchymal cells of the bone marrow. Hence, this study utilized GFP bone marrow transplantation mouse model. The floor of the pulp chamber in maxillary first molar was perforated using ½ dental round bur. Morphological assessment was carried out by micro CT and microscopy and GFP cell mechanism was further assessed by immunohistochemistry using double fluorescent staining with GFP-S100A4; GFP-Runx2 and GFP-CD31. Results of micro CT revealed alveolar bone resorption and widening of periodontal ligament. Histopathological examination showed proliferation of fibroblasts with some round cells and blood vessels in the granulation tissue. At 2 weeks, the outermost layer of the granulation tissue was lined by squamous cells with distinct intercellular bridges. At 4 weeks, the granulation tissue became larger than the perforation and the outermost layer was lined by relatively typical stratified squamous epithelium. Double immunofluorescent staining of GFP and Runx2 revealed that both proteins were expressed in spindle-shaped cells. Double immunofluorescent staining of GFP and CD31 revealed that both proteins were expressed in vascular endothelial cells in morphologically distinct vessels. The results suggest that fibroblasts, periodontal ligament fibroblasts and blood vessels in granulation tissue were derived from transplanted-bone marrow cells. Thus, essential growth of granulation tissue in periodontal polyp was caused by the migration of undifferentiated mesenchymal cells derived from bone marrow, which differentiated into fibroblasts and later on differentiated into other cells in response to injury.

In routine dental clinical practice, perforation of floor of the dental pulp is a common occurrence during root canal treatment for dental caries. These problems tend to be more when treating deciduous teeth in clinical pediatric dentistry. The consequence of a large perforation is chronic inflammatory hyperplasia (1). Granulation tissue grows in the periodontal ligament from the perforated dentin causing periodontal polyp, which may also grow into the pulp cavity. Experimental histopathological studies have been done on periodontal polyp for a long time including histological analysis and treatment (2-5). However, the origin of the cells has not been elucidated. Consequently, using an experimental system on GFP mouse bone marrow transplantation, this study revealed that the cells were derived from mesenchymal cells of the bone marrow. Our research group has been conducting studies on migration and differentiation of cells in many sites in the oral cavity and teeth by using an experimental system of GFP bone marrow transplanted mice.

In this study, the method of Osuga et al. (10) was implemented and the mechanism by which cellular components of the granulation tissue to induce chronic inflammation at the furcation in GFP mouse was carried out (1). Observation with micro CT (m_CT) (11, 12), histopathology and immunohistochemistry were followed through over specific periods of time. Double fluorescence-immunohistochemistry (FIHC) was also done and revealed remarkable results.

Perforation of the floor of pulp chamber

Pentobarbital sodium (Somnopentyl, Kyoritsu Seiyaku Corp, Tokyo, Japan) was injected into the abdominal cavity of mouse for general anesthesia. The mouse was fixed on the plate and hole was drilled on the crown of maxillary left first molar using ½ round bur (Maillefer Ballaigues Suisse) to create a perforation of floor of the dental pulp. The animals were sacrificed at 2 weeks, 1 month, 3 months and 6 months. The tissues were then removed and photographed using m_CT. The present study was approved by the Animal Experiment Committee of Matsumoto Dental University and Okayama University Graduate School of Medicine, Dentistry and Pharmaceutical Sciences.

After each experimental period, the mass was excised, fixed in 4 % neutral buffered formalin solution and then demineralized in 10 % EDTA solution. After washing, tissues were dehydrated in increasing series of alcohol, embedded in paraffin and sectioned serially into 4 μm. Then after, sections were deparaffinized and stained with H-E and TRAP/ALP stain (Wako Pure Chemical Industries, Ltd., Osaka, Japan).

After deparaffinization, slides were pre-treated in citrate buffer in microwave for 1 min followed by blocking with 10 % donkey normal serum for 30 min at room temperature. The primary antibodies used namely anti-GFP, anti-S100A4, anti-Runx2, anti-CD31, Can Get Signal (Toyobo Co, Ltd, Osaka, Japan at 100-fold) and were allowed to react overnight at 4 oC.

At 2 weeks, slight neutrophil infiltration immediately below the perforation was spotted in which a portion was in contact with the dentin wall. The proliferating cells were similar in morphology to the fibroblasts, which are short and spindle in shape with relatively round nucleus. There was an irregularity in the arrangement. Capillaries were present to a certain degree in some places in the granulation tissue. Polygonal epithelial cells with distinct intercellular bridges covered the outermost layer of the granulation tissue. Multinucleated giant cells were observed in some Howship's lacuna (Fig. 1-b, c). The cells showed positive red staining with TRAP. 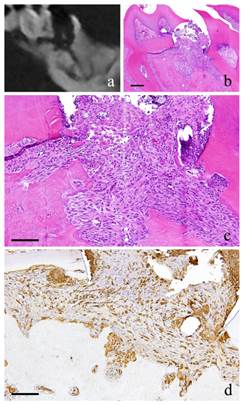 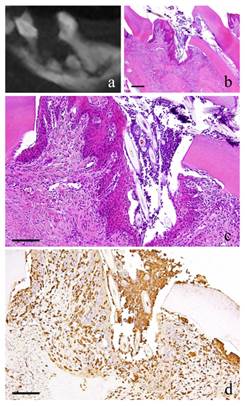 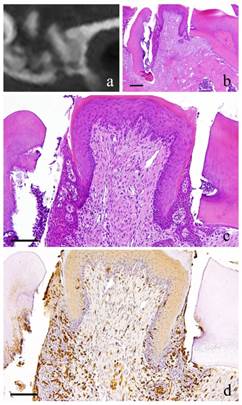 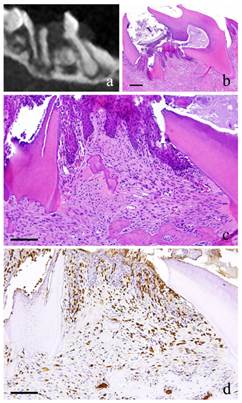 At 1 month, the fibroblasts with round nucleus seen at 2 weeks were also spotted but not in the main part of the granulation tissue. The granulation tissue directly underneath the perforation became bigger and grew inside the pulp chamber; the outermost layer is covered with stratified squamous epithelium. The basal layer of the epithelium showed some sort of activity. Proliferation of capillaries increased compared to 2 weeks and most of them were found just beneath the epithelium (Fig. 2-b, c).

At 6 months, there were continuous growth in the granulation tissue, increased collagen fibers, more fibroblasts with more conspicuous flat nucleus and scattered lymphocytes. However, capillaries have slightly decreased (Fig. 4-b, c).

At 2 weeks, long and spindle in shape cells with spindle shape nucleus as well as vascular endothelial cells were positive to GFP. In addition, multinucleated giant cells in the area of alveolar bone resorption were also positive to GFP (Fig. 1-d).

At 1 month, many GFP-positive cells were present in the periodontal polyp underneath the perforation (Fig. 2-d). At 3 months, the spindle-shaped cells and polygonal cells were also positive to GFP. Furthermore, the epithelial layer was negative to GFP and the cells exhibited regular morphology (Fig. 3-d). However, some GFP-positive cells, having irregular cytoplasm in shape, were observed. GFP-positive reaction was continuously detected at 6 months (Fig. 4-d). GFP-positive cells were detected as early as 2 weeks and then an increase in expression was noted at 1 month. Nevertheless, no further increase was observed thereafter.

The cells inside the capillary were not clear but their expression of CD31 made them discernible. The most number of capillaries was observed at 3 months.

Immunofluorescence double staining of GFP and Runx 2 showed both spindle cells with round nucleus and elongated cells in the granulation tissue were positive to GFP emitting green fluorescence (Fig. 6-a) and Runx2 was also detected in the outline of the cells in red fluorescence (Fig. 6-b). During superimposition, a match between the two proteins was observed indicated by the orange stain (Fig. 6-c). Further superimposition with DAPI showing blue fluorescence in the nucleus showed orange stain at the periphery of the nucleus (Fig. 6-d). 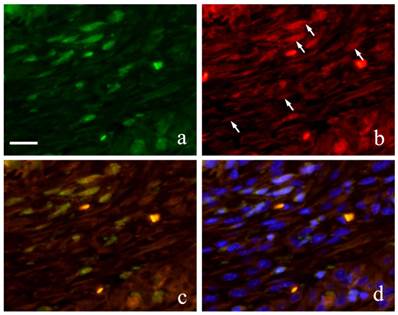 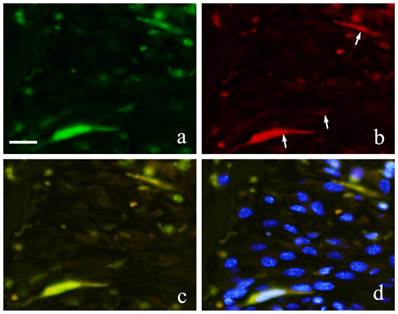 Both GFP and CD31 were clearly expressed by cells in the blood vessels. GFP expression in the cytoplasm of vascular endothelial cells was marked by green fluorescence (Fig. 7-a) and CD31 positive reaction was marked by red fluorescence (Fig. 7-b). Superimposition of the two proteins was least at 2 weeks (Fig. 7-c). At 1 month, an increase in both CD31 and GFP-positive cells was observed. 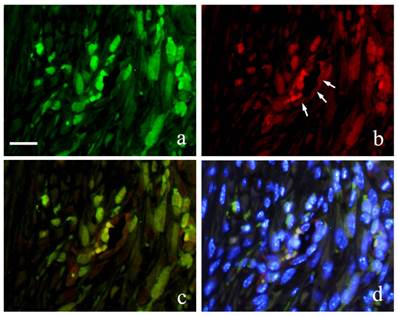 Accidental perforation of floor of the dental pulp is contingent during endodontic treatment. Various conventional dental materials have been used to seal the perforation but not all prognoses were certainly good. Oka et al. (2) used rat to observe the response of periodontal tissue at the furcation associated with medullary pulpal perforation. In a similar study, Imaizumi et al. (3) discussed the enlargement of inflammatory lesion at the furcation. Other animal studies presented the formation of inflammatory lesion as a consequence of perforation of the floor of the pulp chamber. Kudo et al. (4) and Ishida et al. (5) as well as other numerous researches showed the histopathological analysis and treatment following perforation at the furcation area. A detailed histopathological examination by Nakamura et al. (17) showed the continuous growth of granulation tissue in the periodontal ligament. Moreover, to separate and distinguish the periodontal polyp from the growth of the pulp tissue is difficult. Although previous studies have been made, the focus was just on histopathological examination and the origin of the cellular components of the granulation tissue at the furcation was not mentioned.

Recently, the role of undifferentiated mesenchymal cells derived from bone marrow has been widely studied to play a role in periodontal tissue, bone and in other organs. By using bone defect, cementoblast and fibroblast-like cells were produced in the periodontal ligament and alveolar bone by undifferentiated mesenchymal cells from the bone marrow (18-20). Since GFP transgenic mice expressed the protein, all cells that constitute the tissue and even those that differentiated into any cell from transplanted bone marrow-derived cells can be traced because they carry the protein (13, 14). Thus, the study used an experimental system using GFP mice and induced perforation of floor of the dental pulp of maxillary left first molar. With the development of the lesion at the furcation, the origin of the cellular component responsible for the growth of the periodontal polyp was clarified.

Results showed that at 2 weeks, inflammatory cells such as neutrophils were present in response to the physiological mechanism of the periodontal tissue. This was followed by the increase in the fiber component of the granulation tissue as the number of inflammatory cells decreased. Experimental perforation of floor of the dental pulp in mice caused a slight initial suppurative inflammation leading to granulation tissue growth due to gradual chronic inflammation. Similar results were observed from previous experiment (1).

Cells having spindle-shaped nucleus, blood vessels and multinucleated giant cells in areas of bone resorption immediately below the perforation were positive to GFP. Moreover, GFP-positive cells were also spotted to have infiltrated the epithelium, although there were no positive cells in the epithelium. Therefore, the cells are considered to be dendritic cells. Thus, it would also be reasonable to consider that the cells were derived from mesenchymal cells of the bone marrow. In order to identify the GFP-positive cells, double FIHC staining for each marker was performed.

From the above results and overall consideration, fibroblasts, periodontal ligament fibroblasts and blood vessels are essential in the growth of periodontal polyp due to perforation on the floor of the pulp chamber. Furthermore, the osteoclasts observed on the surface of the alveolar bone beneath the perforation originated from transplanted bone marrow cells.