Recent studies have demonstrated that inflammatory cells are a component that plays a role in thrombus formation in ST-elevation myocardial infarction (STEMI). 3-nitrotyrosine (3-NO2-Tyr), a specific marker for protein modification by nitric oxide-derived oxidants, is increased in human atherosclerotic lesions. The purpose of this study was to determine the possible association of inflammatory markers of coronary thrombi with nitroxidative stress. Intracoronary thrombus (n=51) and blood from the systemic circulation were obtained by thromboaspiration in 138 consecutive STEMI patients presenting for primary percutaneous coronary intervention (PCI). Each blood and intracoronary thrombus were measured simultaneously the following biomarkers: C-reactive protein (CRP), 3-NO2-Tyr, soluble CD 40 ligand (sCD40L), vascular cellular adhesion molecule-1 (VCAM-1) and haemoglobin content (only in coronary thrombus).

Time delay in minutes from symptom onset to PCI was 244 ± 324. Serum CRP was positively correlated to CRP content in the thrombus (r= 0.395; p = 0.02) and serum sCD40L was negatively correlated to sCD40L in the thrombus (r= -0.394; p = 0.02). Patients were divided into tertiles according to thrombi 3-NO2-Tyr concentration: 1sttertile (<0.146ng/mg), 2ndtertile (0.146-0.485ng/mg) and 3rdtertile (>0.485ng/mg). Thus, thrombus in the highest tertile had significantly higher levels of CRP (p=0.002), VCAM-1 (p=0.003) and haemoglobin (p=0.002). In conclusion, the present study demonstrated that coronary thrombi with higher levels of 3-NO2-Tyr content often contain more inflammatory markers which could have a direct impact on the efficacy of drugs or devices used for coronary reperfusion.

Acute coronary thrombosis resulting in total occlusion of a coronary artery leads to ST-segment elevation myocardial infarction (STEMI) [1]. The mechanisms of thrombus formation on disrupted and eroded atherosclerotic plaques have been the subject of substantial investigation [2-5]. Thromboaspiration in primary percutaneous coronary intervention (PCI) for STEMI provides a unique opportunity in studying thrombus composition in vivo [6,7]. Thrombosis is a complex mechanical phenomenon that involves the interaction of cellular components of platelets, red blood cells, fibrin and inflammatory cells that make up coronary thrombus [8-11]. Formation of nitric oxide-derived oxidants may serve as a mechanism linking inflammation to development of atherosclerosis [12]. 3-Nitrotyrosine (3-NO2-Tyr), a specific marker for protein modification by nitric oxide-derived oxidants, is enriched in human atherosclerotic lesions [13]. However, the relationship of the 3-NO2-Tyr in the thrombus with inflammatory markers in STEMI patients has never been investigated. This study aims to ascertain the association between inflammatory markers of coronary thrombi with 3-NO2-Tyr in STEMI-patients treated with thrombus aspiration.

The design of this study has been published previously [14]. 138 consecutive STEMI patients who underwent thrombus aspiration during primary PCI are included in this study. Briefly, the inclusion criteria were: patients of both sexes, with no age limit, with a diagnosis of STEMI within 12 hours from symptom onset. STEMI was defined as the presence of compatible symptoms, persistent elevation (> 20 min) of ST segment ≥ 1 mm in at least two contiguous leads, or left bundle-branch block presumably of new onset and elevation of cardiac troponin I [15]. Patients who had ≥50% left main coronary artery stenosis, thrombolytic therapy before PCI, renal dysfunction (serum creatinine levels ≥ 2.0 mg/dL), concomitant inflammatory diseases, or malignant tumours were excluded from this study. If no material was obtained or if the aspirated material could not be analyzed from patients, they were deemed to be ineligible. A total of 51 patients were finally enrolled in the study (Figure 1). The research protocol was approved by the ethics committee. All patients gave written consent for inclusion. This study was registered at ClinicalTrials.gov no. NCT01757886.

PCI was carried out according to guidelines. The 6F Export catheter (Medtronic) or a Pronto catheter (Vascular Solution) was used to perform the manual aspiration. The aspiration was incised 2cm before the thrombus lesion. The thrombectomy catheter was then moved forward very slowly with continuous aspiration and the lesion was crossed. It is recommended to use a second or third syringe. The aspiration of blood from the guiding catheter was made possible through continuous aspiration while the thrombectomy catheter was removed. It is also recommended to make additional passages until no signs of thrombus are observed on an angiogram. Loading dose of clopidogrel, prasugrel or ticagrelor was administered. Aspirin was administered as a 300 mg loading dose followed by 100 mg/day. Full doses of i.v. heparin was administered to the patients before either PCI (1 mg/kg) or 0.7 mg/kg for patients who received abciximab. Dosages of GPIIb/IIIa were bolus of 0.25 mg/kg i.v. and 0.125 mg/kg/min infusion (maximum 10 mg/min) for 12 h.

Clinical, angiographic and laboratory data were prospectively collected in an electronic database.

Flow chart of the study. 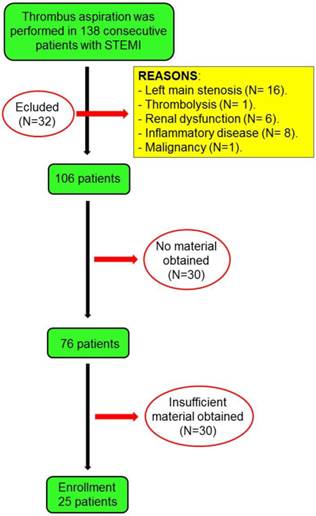 Each thrombus obtained was washed in situ twice with cold saline solution and dried on absorbent paper. The dry thrombi were stored by freezing at- 80ºC until they were processed. For their analysis, the thrombi were homogenized in a glass mortar with 1 mL cold saline solution and then were disaggregated using ultrasound homogenizer, 10 seconds at 100 w in cold conditions. The appropriate analytical measurements were performed in this homogenized material. Peripheral bloods were drawn from the patients at the same time as the thrombi were extracted. The serum was obtained after coagulation and centrifugation of the blood and were fractionated in aliquots and stored at - 70ºC until their analysis. Personnel, blinded to patient's baseline characteristics and clinical outcomes, carried out all measurements.

Analytical variables analysed both in thrombus and serum concentrations were measured using a commercially available enzyme-linked immunoabsorbent assay kits according to the manufacture´s specifications. The coefficients of variation and limit of detection are expressed in Table 1.

Enzyme-linked immunoabsorbent assay kits according to the manufacture´s specifications.

Univariate analyses were performed, and the frequencies and percentages were recorded for each categorical variable, along with the mean ± standard deviation (SD) of the quantitative variables. Those variables that did not meet normality were presented as median and interquartile range (IQR). The Kolmogorov-Smirnov test was used to analyze the normal distribution of variables. For the purpose of the analysis and clinical interpretation, patients were divided into tertiles according to thrombi 3-NO2-Tyr concentration. Groups were compared using ANOVA test with Dunnett's correction for multiple comparisons. The association between quantitative variables was studied using the Spearman Correlation test. Statistical significance was set at p < 0.05. Statistical analysis was performed using SPSS, version 20.0, software (IBM, Copr.; Armonk, New York, USA).

The baseline characteristics of the patients are shown in Table 2. Forty-one (80.3%) were men and mean age was 57 ± 12 years. Prevalence of traditional coronary artery disease risk factors, such as dyslipidemia, smoking, hypertension and diabetes mellitus was 52.9%, 51.0%, 45.1% and 21.6% respectively. Mean body mass index was 28.9 ± 4.2 kg/m2 and 15% patients had previous cardiovascular disease. Study participants showed a leukocytes and platelets count of 12.3 ± 5.0 and 248 ± 82 mm3 x 1000, respectively. Mean haematocrit was 43 ± 6%. Mean ischemic time (from symptom onset to PCI) was 244 ± 324 min. The infarct-related artery more prevalent was left anterior descending coronary (45.1%). Our population included 88.2% of patients with TIMI 0 flow on admission. The incidence of angiographic no-reflow was 2%. Mean left ventricular ejection fraction was 56 ± 11%. Aggressive treatment of high doses of clopidogrel, prasugrel or ticagrelor and abciximab in addition to aspirin and low molecular weight or unfractionated heparin were given to a high number of patients.

Values are mean ± SD or percentages.

As shown in Figure 2, there were differences between the tertiles of 3-NO2-Tyr with regard to associations of inflammatory markers in the intracoronary thrombus. Thrombus in the highest tertile of 3-NO2-Tyr had significantly higher content of CRP (p=0.002), VCAM-1 (p=0.003) and haemoglobin (p=0.002).

Data are expressed as median and IQR.

The recommended technique of thrombus aspiration facilitates thrombus removal from the offending coronary artery in myocardial infarction. It has also made it easier to investigate the in vivo composition of human coronary thrombi [16]. To the best of our knowledge, this is the first study to demonstrate the relationship between nitroxidative stress and inflammatory markers in the intracoronary thrombus.

Elevated plasma levels of CRP are independently associated with increased risk of atherothrombosis [17]. We found in our study that CRP in blood was positively correlated with CRP content within intracoronary thrombus. Takano et al [18] utilized angioscopy to evaluate by direct visualization 48 thrombi in 50 ruptured coronary plaques and the serum CRP level were measured. The mean angioscopic follow-up period was 13 ± 9 months. Superimposed thrombi still remained at follow-up in 35 lesions, and the predominant thrombus color changed from red (56%) at baseline to pinkish-white (83%) at follow-up. The serum CRP level in patients with healed plaques (n = 10) was lower than in those without healed plaques (n = 19), (0.07 ± 0.03 mg/dl vs. 0.15 ± 0.11 mg/dl, respectively; p = 0.007). The authors concluded that the serum CRP level might reflect the disease activity of ruptured plaques. Moreover, recently, Matsuda et al [19] have demonstrated that elevated plasma human CRP levels promote thrombus formation on injured smooth muscle cell-rich neointima by enhancing tissue factor expression.

A platelet activation marker, sCD40L, an important pro-inflammatory mediator, directly participates in thrombus formation during the acute phase of acute myocardial infarction [20,21]. In platelets, sCD40L is rapidly translocated to the platelet surface after stimulation and is upregulated in fresh thrombus [21]. sCD40L levels in serum inversely correlates with sCD40L content thrombi, as shown by our results. The sCD40L is a biomarker with potential clinical implications, since the observed changes in serum in STEMI-patients might be influenced by antiplatelet agents, such as abciximab [22,23,24]

The artery wall is an important site of oxidative protein and it is related with pathologies such as atheromatosis [25]. Our study also suggests that those thrombus with higher 3-NO2-Tyr content often contain more inflammatory markers, such as CRP and VCAM-1, and higher content of haemoglobin, which reflects a high thrombus burden. Protein nitration is a usual process in the living organism and 3-NO2-Tyr accumulates during the aging process reflecting the basal nitroxidative stress normally produced [25]. Each of the individual major risk factors for atheromatosis (hyperglycaemia, hypercholesterolemia, smoking and hypertension) produces endothelial dysfunction and therefore facilitates nitroxidative stress [26]. Moreover, 3-NO2-Tyr have been shown to increase the expression of tissue factor, leading to a prothrombotic state and higher blood viscosity [10,25]. 3-NO2-Tyr, a blood determinant that has shown independent predictors of cardiovascular risks and modulation by statin therapy in a small clinical study [27] has achieved a number of milestones although not used in clinical practice. On the other hand, the fibrinogen is a soluble plasma protein that plays an important function during clot formation. An increase of nitration of fibrinogen has been detected in coronary artery disease [25]. The functional consequences this nitration produces, among other effects, modification in the molecular architecture of the protein with evident amplifying signals towards clot formation [28]. Therefore, interaction between 3-NO2-Tyr and inflammation suggest that it plays an important role in plaque instability and the subsequent formation and release of thrombus.

There were several study limitations. First, the number of patients was relatively small, as in other studies [16], therefore, our findings should be interpreted as hypothesis-generating. Second, difficulties associated with the determination of the actual amount of thrombus present in the vessel as well as difficulties with the use of the coronary angiography to determine the complete removal of the thrombus made it difficult to provide an accurate determination. Third, a contemporary assessment of plaque morphology by optical coherence tomography that can be used to assess the relationship between thrombus characterization and plaque morphology was lacking. Fourth, due to the design of this study we have not assessed the infiltration of different inflammatory cell types in the thrombi. Fifth, we have not investigated the effect of onset-of-pain-to-PCI time on the composition of STEMI thrombus. Finally, we did not analyze markers of reperfusion in our database.

In conclusion, it can be demonstrated by the present study that coronary thrombus with higher levels of 3-NO2-Tyrcontent often contain more inflammatory markers which could have a direct impact on the efficacy of drugs or devices used for coronary reperfusion.

Thank you to the following: Ms. Veronica Dominguez-Gonzalez for technical assistance and to Celine of JC OnLine Business Consulting for her linguistic revision of this manuscript.

This study was supported by grants from the Spanish Society of Cardiology for Clinical Research in Cardiology 2014.

The authors do not have competing interest.