Background. Direct-acting antiviral agents against HCV with or without peginterferon plus ribavirin result in higher eradication rates of HCV and shorter treatment duration. We examined which is better for predicting persistent virologic response, the assessment of serum HCV RNA at 12 or 24 weeks after the end of treatment for predicting sustained virologic response (SVR12 or SVR24, respectively) in patients treated by HCV NS3/4A protease inhibitors with peginterferon plus ribavirin.

Methods. In all, 149 Japanese patients infected with HCV genotype 1b treated by peginterferon plus ribavirin with telaprevir or simeprevir were retrospectively analyzed: 59 and 90 patients were treated with telaprevir- and simeprevir-including regimens, respectively. HCV RNA was measured by TaqMan HCV Test, version 2.0, real-time PCR assay. SVR12 or SVR24, respectively, was defined as HCV RNA negativity at 12 or 24 weeks after ending treatment.

Conclusions. SVR12 was suitable for predicting persistent virologic response in almost all cases. In simeprevir-including regimens, SVR12 could not always predict persistent virologic response. Clinicians should use SVR24 for predicting treatment outcome in the use of HCV NS3/4A protease inhibitors with peginterferon plus ribavirin for any group of real-world patients chronically infected with HCV.

Hepatitis C virus (HCV) infection causes acute and chronic hepatitis and results in cirrhosis and hepatocellular carcinoma (HCC) [1,2]. Sustained virologic response (SVR) after antiviral treatment could reduce the progression rates of cirrhosis and the incidence rates of HCC [3,4]. Thus, SVR is one of the most important factors for predicting a better prognosis after antiviral treatments against chronic HCV infection [5].

DAAs against HCV with or without peginterferon plus ribavirin result in higher rates of eradication of this virus and shorter treatment duration [9-11]. In the present study, we sought to determine which is better for predicting persistent virologic response, the assessment of SVR12 or SVR24 in real-world Japanese patients treated by HCV NS3/4A protease inhibitors with peginterferon plus ribavirin.

Between December 2011 and July 2015, 149 consecutive Japanese patients were enrolled at Chiba University Hospital and Kikkoman General Hospital, an affiliated hospital of Chiba University located in Chiba Prefecture, adjacent to Tokyo. This study team retrospectively began to research the effectiveness and safety of telaprevir-based and simeprevir-based triple therapies in a group of real-world Japanese patients with chronic HCV infection. Patients were eligible for enrollment if they met the following criteria: (1) HCV genotype 1b infection; (2) patients were aged 20 years or older; and (3) patients could participate regardless of whether they had received prior interferon-based therapy. Exclusion criteria included positivity for antibody to human immunodeficiency virus, clinical or biochemical signs of hepatic decompensation, and any serious medical condition of other organs or liver diseases such as autoimmune hepatitis, primary biliary cirrhosis, hemochromatosis, Wilson disease, or alcoholic liver disease. Written informed consent was obtained from all patients, and this study conformed to the ethical guidelines of the Declaration of Helsinki and was approved by the Ethics Committee of Chiba University, School of Medicine (No.523, No.1462 and No. 2153). Participation in the study was posted at our institutions.

Hematological and biochemical tests were performed at least at 4 week-intervals after commencement of treatment, and after stoppage of the treatment. These parameters were measured by standard laboratory techniques at central laboratories, Chiba University Hospital [12]. Transient elastography (Fibroscan, Echosens, Paris) was used to measure liver stiffness according to the methods previously described [13].

Measurement of HCV RNA and Definition of Treatment Response

HCV RNA was measured by TaqMan HCV Test, version 2.0, real-time PCR assay (Roche Diagnostics, Tokyo, Japan), with a lower limit of qualification of 15 IU/mL, and with a range of quantitation of 1.2-7.8 log10 IU/mL [12]. Rapid virologic response (RVR) is defined as undetectable HCV RNA after 4 weeks of therapy [6]. SVR12 and SVR24 were defined as HCV RNA negativity at 12 weeks and 24 weeks after the end of treatment, respectively.

Prior treatment response was as follows: relapse, reappearance of HCV RNA after the end of treatment despite achievement of end-of-treatment response (EOTR), which was defined as undetectable HCV RNA at the end of treatment; virologic breakthrough (VBT), reappearance of HCV RNA at any time during treatment after virologic response; partial response, a greater than 2 log10 IU/mL decrease in the HCV RNA level from baseline until week 12 but detectable HCV RNA at week 12; and null response, a decrease in the HCV RNA level of less than 2 log10 IU/mL at week 12 [6].

Efficacy of Telaprevir- and Simeprevir-Based Therapy 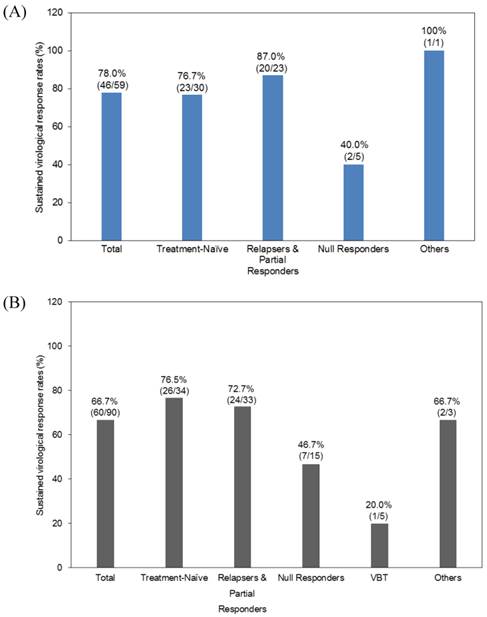 *Naïve plus relapse vs. others; VBT, virologic breakthrough. Data are expressed as mean ± standard deviation (SD).

To clarify the predictors of SVR of the telaprevir group, we compared the pretreatment and treatment factors between SVR and non-SVR groups (Table 2A). Univariate analysis showed that liver stiffness (P = 0.0188), AFP (P = 0.00696), and completion of treatment for 12 weeks (P = 0.0000000115) in the telaprevir-treated patients contributed to achievement of SVR (Table 2A). SVR was attained independently of completion of treatment for 12 weeks in telaprevir-treated patients (Table 3A).

Comparison of SVR24 and non-SVR24 patients by univariate analysis. (A) Telaprevir group. (B) Simeprevir group.

*Naïve plus relapse vs. others; ** Patients finished treatment at least by 12 weeks after the commencement of treatment; SVR, sustained virologic response; VBT, virologic breakthrough. Data are expressed as mean ± standard deviation (SD).

Factors associated with SVR24 among telaprevir group (A) or among simeprevir group (B) by multivariate analysis.

In the present study, we tried to obtain information about the discontinuation of treatment from medical records. In patients treated with telaprevir, the reasons were 2 mental disorders, 1 acute myocardial infarction, 2 anemia, 1 neutropenia, 1 nausea, 1 rash, 1 renal dysfunction, 1 thrombocytopenia and 1 breakthrough. In patients treated with simeprevir, the reasons for treatment stoppage were 1 elevation of ALT [16], 1 upper gastro-intestinal tract bleeding, 1 jaundice, 1 mental disorder, and 8 VBT.

In the peginterferon and ribavirin era, we pointed out that the assessment of serum HCV RNA 24 weeks after EOT using TaqMan PCR was more relevant than 12 weeks for the prediction of SVR [7]. As the development of antivirals against HCV including DAAs have been undergoing very rapid progress, SVR12 now seems suitable for the evaluation of these drugs. There is data mismatching between SVR12 and SVR24 even in the clinical trials of interferon-free regimens [18], although this may be caused by the “lost to follow-up” patients.

However, it is really important for any group of real-world patients chronically infected with HCV to know whether HCV is eradicated or not. The present study revealed that it is better to use SVR24 for predicting SVR in HCV-infected patients treated by HCV NS3/4A protease inhibitors with peginterferon plus ribavirin, and especially with simeprevir-based regimens. In the near future, if greater-sensitivity assays are developed to replace the present TaqMan assay, these situations may change.

We observed the discrepancy between the SVR12 and SVR24 in 4 patients of the simeprevir group. Although the treatment duration was 24 weeks in all 4 patients, the dose of ribavirin was reduced in 2 of 4 patients. Of IL28B rs8099917 genotype, 2 and 2 had major and minor genotypes, respectively. Liver stiffness indicated cirrhosis in only one patient. Only interferon-based regimens were used in the present study. Of interest, all 46 patients in the telaprevir group with SVR12 finally achieved SVR24. Further studies will be needed in interferon-free regimens against HCV-infected patients.

Ogawa et al. [19] reported that the treatment outcome of simeprevir-based triple therapy for HCV genotype 1b patients with telaprevir failure depended on the prior response to peginterferon-α and ribavirin. We also found that HCV genotype 1b patients with breakthrough during telaprevir-based therapy had relatively poor response to simeprevir-based triple therapy; the SVR rate of those patients, although a small sample size, was 25% (1 of 4 patients). In future, these patients will be treated with interferon-free combination with DAAs [9-11, 17, 20].

The authors thank the medical staffs of the liver units of Chiba University Hospital and Kikkoman General Hospital who cared for the patients described herein.

This work was supported by Research Grants for Scientific Research from the Ministry of Education, Culture, Sports, Science, and Technology, Japan.