Background: The endothelial progenitor cells (EPCs) dysfunction is a critical event in the initiation of atherosclerotic plaque development and the level of circulating EPCs can be considered a biomarker of cardiovascular events. The level and functional change in EPCs has been investigated in hemodialysis patients, but the effect of absolute number of EPCs on risk of death has not yet been explored. We hypothesized that the number of EPCs predicted death from cardiovascular and all-cause mortality in hemodialysis patients.

Methods: We evaluate the association between endothelial progenitor cells and clinical outcome in 154 patients on maintenance hemodialysis. The blood sample was drawn at the time of patient enrollment and EPCs were identified by flow cytometry using triple staining for CD34/CD133/KDR.

Results: The median duration of follow-up was 4.19 years. There were 79 (51.3%) deaths during the follow-up period, 41 of whom died due to a confirmed cardiovascular cause. The cumulative survival was greater in the high-EPC group than the low-EPC group for all-cause and cardiovascular mortality. Decreased EPCs levels were associated with a significant increase in the risk of cardiovascular and all-cause mortality after adjusting for age, gender, current smokers, diabetes mellitus, and hypertension.

Cardiovascular disease is the leading cause of death in chronic kidney disease (CKD), particularly entry to hemodialysis. CKD shares many risk factors with cardiovascular disease, and one disease may lead to the other. Hypertension, diabetes mellitus, and hyperlipidemia are the major risk factors in the development of endothelial dysfunction and atherosclerotic plaque formation. Even minor renal functional impairment can trigger endothelial dysfunction or promote chronic inflammation, resulting in atherosclerosis and causing further cardiovascular morbidity and mortality (2). Elevated levels of circulating endothelial cells and a deficit of two angiogenic factors, VEGF and angiopoietin-1, indicate the destruction of vascular hemostasis and defective vascular repair as renal function deteriorates (3). Although the level and functional change in EPCs has been investigated in hemodialysis patients, the relationship between the absolute number of CD34+/CD133+/KDR+ (Kinase insert domain-conjugating receptor) EPCs and risk of death has not yet been explored.

From May 2009 to September 2014, 154 patients undergoing maintenance hemodialysis for >3 months at Cardinal Tien Hospital (New Taipei City, Taiwan) were enrolled in our study (72 men, 82 women). The median duration of follow-up was 4.19 years (mean 3.78 ± 1.41 years, range 0.15-5.08 years). The duration of hemodialysis was 8.66 ± 4.3 years (range 4-24 years). We excluded subjects who switched to peritoneal dialysis, performed renal transplantation and presented with fever or other sign of acute infection and chronic inflammation. Causes of death related to cardiovascular complications included sudden death, heart failure, myocardial infarction, cerebral infarction, and cerebral hemorrhage. All patients provided written informed consent for participation and the study was performed in accordance with the Declaration of Helsinki. Data on survival status and causes of death were retrieved by a review of hospital records and rechecked by the Taiwan Society of Nephrology: Kidney Dialysis, Transplantation (TSN KiDiT) registration system. This study was approved by the Human Ethical Committees of Cardinal Tien Hospital.

The clinical characteristics of the patients, including age, gender, and duration of hemodialysis, were obtained from medical records. Each patient was interviewed face to face at the time of enrollment regarding cigarette smoking status and alcohol consumption. Individuals who had not smoked more than 100 cigarettes in their lifetime were classified as never-smokers based on common conventions in epidemiological research. The pattern of drinking, including frequency of drinking days and number of drinks consumed in a day, was recorded. Patients who drank a bottle of alcoholic beverage (including beer, rice beer, and sorghum liquor) or more per month for at least 1 year were defined as ever drinkers. Current and former smokers were grouped together in the smoker's group and compared to individuals in the never-smoker's group. The ever drinker's group was compared to individuals in the non-drinkers group. Body weight was used to calculate the body mass index (BMI). Systolic blood pressure and diastolic blood pressure were measured in the supine position after a 10-15 minute rest. The definition of hypertension was based on the Seventh Joint National Committee: systolic blood pressure before dialysis ≥ 140/90 mmHg or antihypertensive treatment. All of the participants met the diagnostic criteria for diabetes mellitus set forth by the American Diabetes Association: fasting glucose ≥ 126 mg/dL (7.0 mmol/L) or 2-h plasma glucose ≥ 200 mg/dL (11.1 mmol/L) after 75 g oral glucose loading test, or HbA1C ≥ 6.5%.

Continuous variables were represented as mean and standard deviation (SD) if normally distributed and compared by parametric test such as Student's t-test; variable that don't have normal distribution is compared with non-parametric test like Mann-Whitney U-test. The Kolmogorov-Smirnov test and Shapiro-Wilk test were commonly used to check if the variable has normal distribution. Chi-square test and Fisher's exact test were used to analyze categorical data.

The Kaplan-Meier estimation method was computed to assess the probability of survival and compared statistically using log rank test. Cox proportional hazard regression assumes the association between various clinical data and time of death. Confounding factors were included in multivariate models if they had significant associations in the univariate analysis or clinical evidence indicated a relationship with the risk of mortality. A two-tailed p value <0.05 was considered significant. All analyses were performed with IBM SPSS Statistics version 20.0 (SPSS Inc., Chicago, Ill., USA) and Stata/SE 10.0 (StataCorp LP, College Station TX) for Windows.

The clinical characteristics of the participants are summarized in Table 1 based on the level of circulating EPCs. The number of circulating EPCs ranged from 2/μL to 10/μL (median 5.0/μL), with a mean (±SD) of 5.29 ± 2.06/μL. No significantly different variable factor was found between patients with high and low circulating EPC levels (Table 1). The cause of death was reviewed in 79 (51.3%) hemodialysis patients during the follow-up period, 41 of whom died due to a confirmed cardiovascular cause. The cause of death is shown in detail in Table 2.

Value are medians ± interquartile ranges if not normally distributed.

Cause of death in hemodialysis patients.

To the best of our knowledge, this is the first study to demonstrate that the number of circulating EPCs predicts all-cause and cardiovascular mortality in patients undergoing hemodialysis for at least 3 months. This study had a longer follow-up period, which allowed us to clarify the association between circulating EPC levels and clinical outcome.

In the last decade, EPCs have been the focus of investigation for vascular injury, cardiovascular events, and response to therapy. The level of circulating EPCs has been inversely correlated with atherosclerotic risk factors in coronary artery disease (4) and advanced heart failure (5). The level of EPCs has also been shown to be a surrogate biological marker of vascular function (6) or cumulative cardiovascular risk in the general population (7, 8). Statins can induce the proliferative capacity of EPCs in vitro by preventing senescence (9). The angiotensin-converting enzyme inhibitor, ramipril, can enhance the functional activity of EPCs in patients with coronary artery disease (10), and rosiglitazone can increase the level and improve the migratory function of circulating EPCs in type 2 diabetic patients via up-regulation of the Akt/eNOS pathways (11, 12). These phenomena indicate the therapeutic potential of EPC transplantation in patients with cardiovascular diseases. 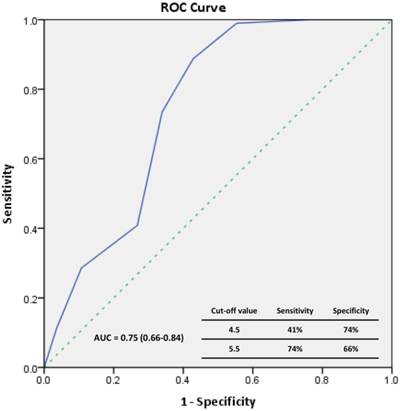 Hazard ratio for various factors for all-cause mortality in all hemodialysis patients. 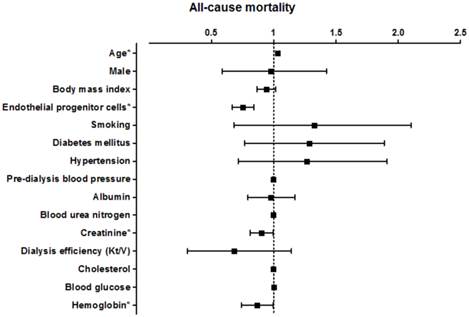 Hazard ratio for various factors for cardiovascular mortality in all hemodialysis patients. 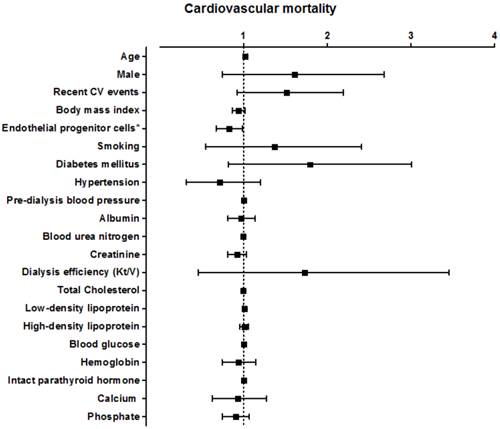 In CKD, the circulating number (13, 14), colony formation, migratory ability, adhesion (15), and angiogenic function(16) of EPCs are decreased (16, 17); thus, EPC dysfunction is a critical event in the initiation of atherosclerotic plaque development and the level of circulating EPCs can be considered a biomarker of cardiovascular events in patient on maintenance hemodialysis (18, 19). The uremic toxin can inhibit EPC activity and differentiation in vitro; therefore, imitating the dialysis modality may ameliorate the EPC level and restore angiogenesis (20). Compared to conventional hemodialysis, nocturnal hemodialysis is associated with significant improvement in the ability of EPCs to promote tissue perfusion in ischemic insult (21).

The aim of our study was to investigate the level of circulating CD34+/CD133+/KDR+ EPCs based on all-cause and cardiovascular mortality in patients on maintenance hemodialysis. No variable significantly differed between the high-EPC and low-EPC group. Notably, the cumulative survival curve in the low-EPC group (EPC < 5/μL) predicted poor survival for all-cause mortality and cardiovascular mortality. Lee et al. concluded that a decreased level of circulating EPCs is associated with cardiovascular events but not all-cause mortality(18). The proportion of deaths from all-cause mortality in this study was 51.3% (79/154), whereas Lee et al. reported that 7% (5/70) of hemodialysis patients in their study died, all from cardiovascular causes. With a large sample size and longer follow-up, this study confirmed the significance association between the level of circulating EPCs and patient survival. Moreover, Maruyama et al. demonstrated that circulating CD34+ hematopoietic stem cells are significantly associated with vascular risk and all-cause mortality in chronic hemodialysis patients (22). However, screening for CD34/CD133/KDR triple-positive cells rather than only CD34-positive cells can more accurately characterize EPCs, as some circulating mature endothelial cells also express CD34, stem cell marker CD133 acts as a more suitable marker of EPCs (23), and CD133/KDR dual-positive cells exhibit a greater capacity to migrate and differentiate into mature endothelial cells in postnatal vasculogenesis.

Vitamin D has the positive effect on the number of circulating EPC and optimal level of 25-vitamind D can reduce the risk of cardiovascular event and diabetes(26). Calcitriol, active form vitamin D3, stimulate endothelial colony-forming cells (ECFCs) proliferation through increasing VEGF expression and pro-MMP-2 activity in vitro, which is very important in angiogenesis(27). Deficiency of vitamin D might decrease the EPC number and function in hemodialysis patients (28). HMG-CoA reductase inhibitors (statins) increase the number of EPC by inducing bone marrow hematopoietic precursor cell differentiation through PI3K/Akt pathway (29) and to improve the vascular wall pathology in balloon induced injury (30). This offers another explanation of clinical benefit of statin therapy in coronary artery disease patient (31). Erythropoietin had been reported to improve cardiac function after myocardial infarction by the proangiogenic properties of EPC (32, 33). Administration of erythropoietin can increase the number of functionally active EPC by Akt protein kinase pathway and then repair the vascular injury caused by ischemia or inflammation (34, 35). Also, angiotensin II-related blocker affects the number of EPC (36). In vitro study, uremic toxins such as β2-microglobulin and indole-3 acetic acid may also induce EPC apoptosis during early differentiation (37). Taken together, numerous factors had been shown to be associated with the number of EPC in hemodialysis patients and each of those possibly influence the role of EPC level as a prognostic marker.

Our study has several limitations. First, we did not take into account EPC colonies to determine the functional change in hemodialysis patients. Second, a limited number of confounding factors were recorded and adjusted for in the Cox regression model. To confirm the utility of EPC levels in predicting mortality, a multicenter interventional study with a larger number of patients and multiple dialysis centers is needed.

The level of circulating EPCs in hemodialysis patients is worthy of consideration, as low EPC levels were associated with death from all-cause and cardiovascular mortality. These findings suggest that circulating EPC levels independently predict the clinical outcome in patients on maintenance hemodialysis. Thus, the EPCs levels may be a useful predictive tool for evaluating the risk of death in maintenance hemodialysis patients.

6. Glowinska-Olszewska B, Luczynski W, Bossowski A. [Endothelial progenitor cells as a new marker of endothelial function with respect to risk of cardiovascular disorders]. Postepy higieny i medycyny doswiadczalnej. 2011;65:8-15