Background. Intraoperative blood transfusion increases the risk for perioperative mortality and morbidity in liver transplant recipients. A high stroke volume variation (SVV) method has been proposed to reduce blood loss during living donor hepatectomy. Herein, we investigated whether maintaining high SVV could reduce the need for blood transfusion and also evaluated the effect of the high SVV method on postoperative outcomes in liver transplant recipients.

Methods. We retrospectively analyzed 332 patients who underwent liver transplantation, divided into control (maintaining <10% of SVV during surgery) and high SVV (maintaining 10-20% of SVV during surgery) groups. We evaluated the blood transfusion requirement and hemodynamic parameters, including SVV, as well as postoperative outcomes, such as incidences of acute kidney injury, durations of postoperative intensive care unit and hospital stay, and rates of 1-year mortality.

Several strategies have been proposed to reduce intraoperative blood loss and blood transfusion. Several randomized clinical trials have found that restrictive transfusion strategy yields equivalent or superior outcomes compared with a liberal strategy.[5-7] The low central venous pressure technique has been found to reduce intraoperative blood loss and red blood cell (RBC) transfusion during liver transplantation.[8, 9] Recently, our group found that blood loss during living donor hepatectomy was significantly lower in donors who maintained 10-20% of stroke volume variation (SVV) compared with those who maintained <10% of SVV.[10, 11] However, no study has yet reported the relationship between the high SVV method (i.e. maintaining 10-20% of SVV during surgery) and intraoperative blood transfusion in liver transplant recipients, who are frequently at risk for blood transfusion during liver transplantation.

Herein, we investigated whether maintaining high SVV could reduce the requirement for blood transfusion during liver transplantation. Additionally, we evaluated the effects of the high SVV method on postoperative outcomes in liver transplant recipients.

After obtaining institutional review board approval, the electronic medical records for patients aged ≥18 years who underwent liver transplantation at Asan Medical Center between December 2009 and December 2013 were retrospectively reviewed. Patients who received more than 5 units of packed RBCs for transfusions during surgical procedures were excluded. Additional exclusion criteria included a history of previous liver transplantation, cardiac arrhythmia, and the intraoperative use of inotropics or a cell-saver.

The FloTrac sensor and Vigileo monitor (Edwards Lifesciences, Irvine, CA) were used to analyze arterial pressure waveform data over 20-sec intervals, using a recalibration interval of 1 min. A Swan-Ganz CCOmbo pulmonary artery catheter (Edwards Lifesciences) was inserted via an introducer sheath into the internal jugular vein and advanced to a wedged position under guidance of the pressure curve. The pulmonary artery catheter was connected to a Vigilance II monitor (Edwards Lifesciences), and the STAT-mode right ventricular end-diastolic volume index was measured over 1-min intervals. A multi-data logger (Edwards Lifesciences) was used to simultaneously capture and store patient data from the Vigilance II monitor and Vigileo devices. We obtained hemodynamic parameters, including invasive arterial pressure, central venous pressure, pulmonary artery pressure, SVV, and the right ventricular end-diastolic volume index from each patient at six time points as follows: 1 and 2 h after skin incision, 30 min before and after extraction of the diseased liver, 30 min after reperfusion of the transplanted liver, and at the completion of hepatic artery reconstruction. Values for hemodynamic parameters measured at six specific time points were obtained by determining the means of measurements taken over 3-min intervals. Mean measurements of each hemodynamic parameter were used for statistical analysis.

Continuous data were tested for normal distribution using the Shapiro-Wilk test. Data are presented as means ± SD for normally distributed continuous variables, medians (interquartile range) for skewed data, and numbers (%) for categorical variables. Liver transplant recipients were divided into two groups: control (who maintained <10% of SVV during surgery) and high SVV groups (who maintained 10-20% of SVV during surgery). Continuous variables were compared using Student's t-test or the Mann-Whitney U test, as appropriate. Categorical data were compared using the χ2 test or Fisher's exact test to assess differences between the two groups, as appropriate. A P-value of <0.05 was used as a threshold for statistically significant differences. Statistical analyses were performed using SPSS version 21.0 (IBM Corp., Armonk, NY).

A total of 1480 liver transplantation were performed between December 2009 and December 2013 at our hospital. Among these procedures, 1148 cases were excluded, from our current analyses, including 65 cases with a history of previous liver transplantation, 448 with intraoperative use of inotropics, 607 with blood transfusion with more than 5 units of packed RBCs, 23 with cardiac arrhythmias, and 5 with incomplete medical records. Ultimately, 332 liver transplant recipients were therefore included in our present study. The number of recipients in the high SVV group was 44 (13.3%).

Table 1 presents preoperative characteristics for our study patients. The mean age of the subjects in our current series was 52.1 years and 79.5% of these recipients were male. The mean preoperative hematocrit and platelet levels were 36.8% and 92.1 × 109/L, respectively. No significant differences in preoperative variables were detected between groups. 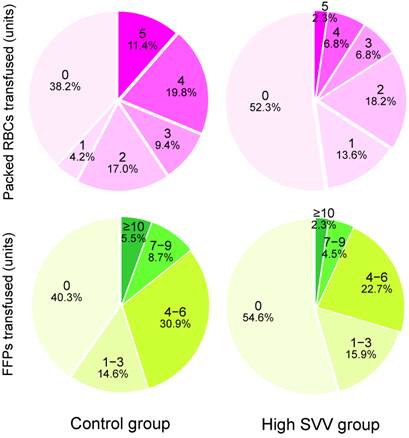 In this present study, we found that the transfusion requirements for packed RBC and FFP were significantly lower in the high SVV group (who maintained 10-20% of SVV) than in the control group (who maintained <10% of SVV) during liver transplantation. Additionally, there were no significant between-group differences in postoperative outcomes among liver transplant recipients.

In our present study, we found that maintaining a high SVV can contribute to reduced blood transfusion requirements in liver transplant recipients. The utility of SVV in guiding intraoperative fluid administration has been reported in many clinical contexts, such as in hepatic and neurosurgical surgeries.[10, 22, 23] Importantly, our group has previously suggested that maintaining a high SVV is a useful way to reduce blood loss during living donor right hepatectomy.[10, 11, 24] Additionally, a higher SVV value has been reported to correlate with a lower right ventricular end-diastolic volume index value in liver transplant recipients.[12] The maintenance of a high SVV appears to induce lower normal levels of intravascular volume and to thereby prevent vascular congestion. Furthermore, the restricted administration of fluid may avoid a reduction in platelet numbers and the dilution of coagulation factors.[9]

We also found in our present analyses that the high SVV method did not exert detrimental effects on renal function. Our findings are in accord with those of Feng et al., who reported that the low central venous pressure technique had no harmful effects on perioperative renal function or postoperative outcomes.[8]

We excluded patients with massive blood loss, who were defined as having received more than five units of packed RBCs during liver transplantation. This criterion is comparable with previously reported definition in cardiac surgery.[25] Maintaining an adequate volume status may be difficult in patients who undergo a large volume blood transfusion. Moreover, perioperative bleeding can be exacerbated by the administration of blood products, most likely because of hypothermia, hypocalcemia, and dilution of the coagulation factors.

Our present analysis had several possible limitations. Because of our retrospective study design, careful interpretation is required to evaluate the potential association between the high SVV method and blood transfusion. However, all procedures were performed by the same surgical team at our hospital and no statistical differences between groups were detected when the preoperative and postoperative levels of hematocrit were compared. Furthermore, the number of transfused packed RBCs and SVV, which were the primary variables of interest, represented objective variables that were collected in a blind manner. Another possible limitation was use of the number of packed RBCs that were transfused during the surgical procedure as a surrogate measure of intraoperative blood loss. Clinical estimates of intraoperative blood loss are notoriously difficult to accurately evaluate,[26] while a simple way to assess this parameter is to quantify the requirement for blood transfusions.

In conclusion, we find from our present analysis that maintaining a high SVV is an effective method for reducing the blood transfusion requirements during liver transplantation without worsening the postoperative outcomes. This offers useful insights into the value of SVV measurements, as they highlight the possibility of avoiding unnecessary and potentially harmful blood transfusion in liver transplant recipients.

The authors declare no conflicts of interest.