In this study, cholesterin was implanted in the subcutaneous tissue in mice to induce the formation of cholesterol granuloma. Histological examination was carried out to determine the type and source of cells. The tissue surrounding the embedded cholesterin was examined histologically within the period of 6 months. Cell differentiation in cholesterol granulomas was investigated using ddY mice and GFP bone marrow transplanted mice. Cholesterin was embedded in mice subcutaneously and histopathological examination was carried out in a period of 6 months. Results showed that at 2 weeks, cholesterin was replaced partly by granulation tissues. The majority of cells in the granulation tissues were macrophages and foreign body giant cells and the center consists of small amount of fibroblasts, collagen fibers and capillaries. At 3 months, more granulation tissue was observed compared to 2 weeks. Similar cells were observed, however, there were more fibroblasts, collagen bundles and capillaries present compared to 2 weeks. At 6 months, the cholesterin was mostly substituted by fibrous tissues consisting mainly of fibroblasts and collagen fibers with some macrophages and foreign body giant cells. Specifically, the outer part of the tissue consists of fibroblasts, collagen bundles and capillaries and the inner portion is filled with collagen bundles. Immunohistochemistry revealed that macrophages and foreign body giant cells were positive to GFP and CD68 although the fibroblasts and capillaries in the outer portion of cholesterol granulomas were GFP negative. Some spindle shape fibroblasts were also GFP positive. Immunofluorescent double staining revealed that cells lining the blood vessels were both positive to GFP and CD31 indicating that those were endothelial cells and were actually derived from the transplanted bone marrow cells. The results suggest that macrophages, foreign body giant cells as well as fibroblasts and capillary endothelial cells are bone marrow derived mesenchymal cells.

The mice were placed under Isoflurane inhalation anesthesia and 10 mg of cholesterin was implanted subcutaneously by making an incision on the back of the mouse and then closed with sutures. After 2 weeks, 3 weeks, 3 months and 6 months, the embedded tissue was removed en bloc and fixed in 10 % neutral buffered formalin. The examined animals are shown in Table 1.

Periods and Number of Experimental Animals (ddY and GFP)

The fixed samples were dehydrated in series of alcohol, embedded in paraffin and sectioned into 5μm. Then after, specimens were stained with hematoxylin and eosin and examined under a microscope.

After deparaffinization, slides were pre-treated in citrate buffer in microwave for 1 min and blocked with 10 % donkey normal serum for 30 min at room temperature. Primary antibodies anti-GFP, anti-CD31, anti-CD68 were each diluted at 1:100 with Can Get Signal (Toyobo Co., Ltd, Osaka, Japan) and allowed to react overnight at 4 oC.

The study conformed to the experimental guidelines in animal experiment of Matsumoto Dental University approved by the Animal Laboratory Examination Committees of the University (Approval number # 233-13).

At 3 weeks, the granulation tissues became bigger replacing more of the embedded cholesterin crystals. This resulted to a smaller irregular space in the center (Fig. 1-b). Cell morphology was not apparent due to the loss of nucleus in macrophages and FBGCs. The partition between the cell proliferation and remaining cholesterin spaces was still apparent. Many small and large blood vessels were spotted at the periphery of the granulation tissue. Moreover, capillaries were seen in between fibroblasts and collagen fiber in relatively thin peripheral layer of fibrous tissue. 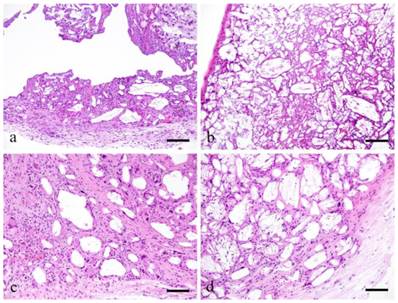 At 6 months, a large amount of fibrous tissue separated the macrophages and FBGCs (Fig. 2-c). Fibroblasts and capillaries distributed in the collagen bundles were mostly GFP negative. The fibroblasts, collagen fibers and capillaries in the outer layer did not express GFP. However, fibroblasts having spindle shaped nuclei were GFP positive (Fig. 2-c, arrows). Capillaries that were present in the granulation tissue were positive to CD31 in the central portion of then granulation tissues (Fig. 2-d, arrows). 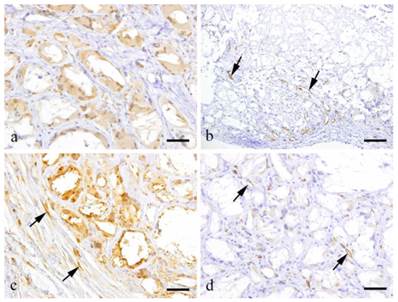 Immunofluorescent double staining with GFP (green) and CD31 (red) showed GFP expression in the cytoplasm of endothelial cells in distinct blood vessels (Fig. 4-a), and also in the cross-linked-macrophages and FBGCs. Double staining with CD31 and DAPI (blue) showed red fluorescence on vascular endothelial cells indicating CD31 expression. Nuclei were stained blue for DAPI (Fig. 4-b). 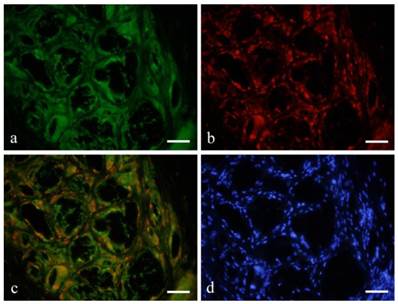 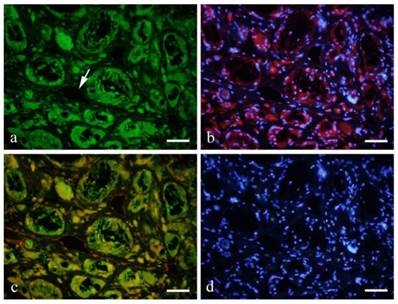 Macrophages and FBGCs mainly gather in reaction to a large external matter producing the so-called foreign body granuloma. Clinical reports showed that charcoal (1) and silicone (2, 3) are some of the foreign materials that can induce foreign body granuloma formation. Previous studies showed the formation of granulation tissue induced by dermal filler (5), subcutaneous injection of acetate in the treatment of prostate cancer (10) and bone wax (11). Moreover, Nakahori et al reported a case of lung cancer from silicone granuloma (3). Kim JS et al (7) and Lsaacson B (12) described the formation of granulation tissue induced by cholesterin. Cholesterol granuloma is a granulation tissue growth on cholesterin crystals. Macrophages mainly proliferate in the granuloma and then coalesce to form multinucleated giant cells having similar characteristics with FBGCs.

In this study, cholesterin was implanted in the subcutaneous tissue in mice to induce the formation of cholesterol granuloma. Histological examination was carried out to determine the type and source of cells. Biological evaluation of several materials have been made. This process conformed to ISO standards (13). The tissue surrounding the embedded cholesterin was examined histologically within the period of 6 months.

The examination model is effective in the examination for determine the origin of the component cells due to the histopathological results. The bone marrow transplantation mouse model was used since it was assumed that the cells would originate from the bone marrow (14-16). Clinical application on the pluripotency of BMDCs had already begun. In fact cell transplantation in the treatment of myocardial and cerebral infarctions has been started with the objective that the cells would differentiate into what they are expected. In the oral region, trials concerning bone regeneration using cultured mesenchymal stem cells from human bone marrow have been conducted. This was for the purpose of regeneration of the jaw with thickness and strength required for oral implant placement. Bone marrow mesenchymal cells of patients were cultured, harvested and then grafted for the purpose that the cells would differentiate into osteoblasts for bone formation. However, studies on regenerative medicine using BMDCs have only been reported in the reconstruction of a very limited area in bone tissue. It is expected that other areas would be explored in the future. Therefore, studies on the migration and cell differentiation of BMDCs for oral tissue regeneration would contribute to the advancement in regenerative medicine. Using GFP transgenic mice, cells that constitute the tissue would express GFP if the transplanted BMDCs differentiate into any cell. Hence, tracking of differentiated cells is possible.

Tsujigiwa et al.'s study on pluripotent BMDCs revealed the migration and differentiation of mesenchymal cells into odontogenic and periodontal tissue cells (17). Transplanted GFP-positive BMDCs migrated to the oral region in a short period of time as early as a month after implantation. The same research group showed GFP positive cells in mice periodontal tissue, dendritic cells, Langerhans cells, osteoclasts etc. However, there is no clear data of differentiation into vascular endothelial cells (18, 19).

This study was supported in part by Grant-in-Aid for Scientific Research (C) #26463031 from the Japan Society for the Promotion of Science.