Background: Meshes implanted intraperitoneally are known to cause adhesions potentially resulting in complications such as chronic pain, enterocutaneous fistula, or mesh infection. This study introduces a model for investigation of intestine-to-mesh adhesions and evaluates as to whether missing of visceral peritoneum is causative.

Methods: In 18 rats, rectangular 1.5 x 2 cm patches of an uncoated polypropylene mesh (Ultrapro®) were sewn to the inner abdominal wall next to the cecum. Additionally, a meso-suture ensured contact between cecum and mesh. Rats were assigned to 2 groups: in 8 rats the peritoneum was left intact, in 10 the cecum was depleted from peritoneum with abrasion. Sacrifice was on day 7. Macroscopic evaluation used two adhesion scores. Specimens were evaluated microscopically, statistical analyses employed student's t-test.

Results: On day 7, rats with mesh implantation combined with locally de-peritonealization by cecal abrasion mostly showed severe cecum-to-mesh agglutination (mean Lauder score 92%, mean total Hoffmann score 90%), whereas meshes of most animals without cecal abrasion only had some coverage with intraabdominal fat (33%, 24%; p = 0.0002). Histological work-up showed adequate wall ingrowth of mesh in all rats. In animals with cecal abrasion, meshes were mostly adhesive with cecal wall. However, when the peritoneum of cecum was unimpaired, abdominal wall above the mesh as well as cecum usually revealed sub-peritoneal tissue and a mono-layer cell coverage as seen in normal peritoneum.

Conclusion: This study introduces a model mimicking a clinical situation of e.g. hernia repair by intraperitoneally implanted meshes when mesh has contact with normal and with de-peritonealized intestine. The model might be useful for testing mesh types and coatings as well as other devices for their efficacy in adhesion prevention. The high adhesion scores of rats with local de-peritonealization compared with the low scores of animals with intact peritoneum indicate that the integrity of intestinal peritoneum is a decisive factor for adhesion formation.

Adhesion formation following hernia repair via mesh implantation can be a severe complication especially when using intraperitoneal onlay mesh implantation (IPOM). Sequelae of adhesion formation can be chronic abdominal pain 1-5, female infertility 1-3,6, enterocutaneous fistulas 7-11, bowel obstruction and incarceration 2,3,10-12. Furthermore, adhesions may seriously complicate reoperations 13-16 and generally increase the risk of redo surgery. Depending on surgical technique and type of mesh, an incidence of adhesion formation of about 30 % is reported 17,18. The variety of implants available on the market providing additional features such as coating to reduce the incidence of intestine-to-mesh adhesions underlines the relevance of this phenomenon in hernia repair.

Our recently introduced peritoneal adhesion model based on the “Harris group adhesion model” 19 provides a high reproducibility of adhesion formation 20 and is helpful to test and compare different adhesion prevention devices. The present study introduces a new variant of this model with mesh implantation in the right lower abdomen instead of creation of an abdominal wall injury to assess whether integrity and/or impairment of peritoneal surface are a trigger for formation of intestine-to-mesh adhesions.

A weight-dependent dose of 80 mg/kg body Ketamine and 5 mg/kg Xylazine was given to achieve general anesthesia. Absence of flexor reflexes indicated achievement of required level of narcosis for surgery. Afterwards, the abdomen was shaved and prepared with alcohol and iodine solution. Access to the abdominal cavity was gained via a 4 cm median laparotomy. Rectangular 1.5 x 2 cm patches of an uncoated polypropylene mesh (Ultrapro®) were sewn with a running 4/0 Prolene® suture to the inner right lower abdominal wall next to the cecum in all 18 animals. In P-INTACT rats (n = 8) the peritoneum was left intact, whereas in P-ABRASE animals (n = 10) the cecum was delivered and kept moist by a watery gauze swab while a dry gauze was used to gently abrade the cecal peritoneum in a standardized manner. Sufficient removal of visceral peritoneum was indicated by sub-serosa bleeding and creation of a homogenous surface of petechial hemorrhages over a 1 x 2 cm area. A suture from the cecal meso to the lateral abdominal wall was placed in all animals to ensure that cecum and mesh stayed in contact. The abdomen was closed using two-layer closure technique by a consecutive suture.

Animals were monitored until complete awakening and kept warm with an infrared lamp after surgery. They were given novaminsulfone in a body weight adapted dose to counteract expectable pain in the immediate postoperative period. All animals were sacrificed on postoperative day 7 by carbon dioxide narcosis followed by cervical dislocation. The peritoneal cavity was immediately re-entered through an incision at a left position remote from the original laparotomy scar to avoid impairment of any potentially formed adhesions. Cecum and abdominal wall with mesh were harvested for histopathological assessment following a standard protocol.

Upon autopsy, photographs of the affected areas of all animals were taken for documentation. Adhesions between cecum and mesh area were evaluated macroscopically by two independent observers according to the scoring schemes by Lauder et al. 21 and Hoffmann et al. 22. The Lauder scoring scheme for measurement of adhesion formation takes into account number, strength, and distribution of adhesions 21. Adhesions were measured and expressed as a percentage of the total mesh surface following Hoffmann's scoring scheme. This was further translated into grades 0-4. Each animal was also evaluated for strength of adhesion formation and graded 0-3, the extent of adhesion formation was also graded 0-3. These three sub-scores were summed for a total adhesion score 22. Histopathological assessment was performed on all cecum and abdominal wall areas with mesh samples to evaluate adhesion formation and extent of inflammatory response. Both, macroscopic and microscopic observers were blinded to the study groups.

Samples were excised en bloc, rinsed and immersed in 4% buffered formalin. Specimens were embedded in paraffin blocks and serial sections were stained with haematoxylin & eosin and Periodic acid-Schiff and examined by light microscopy for histological evaluation.

A total of 18 animals were included in the study; none of these animals had to be sacrificed during the course of the investigations. All animals showed equitable viability as well as course of body weight (mean body weight loss on day 7: 32.3 ± 12.4 g). There was no significant difference in the loss of bodyweight between animals without and with cecal abrasion (P-INTACT: 31.4 ± 15.7 g, P-ABRASE: 33.1 ± 9.8 g; p = 0.78).

Figure 1 shows representative photographs of animals without and with cecal abrasion intraoperatively (Figures 1A and 1C) and on day 7 during autopsy (Figures 1B and 1D). In P-INTACT rats, meshes for the most part revealed some coverage with intraabdominal fat (Figures 1B). In one case, the small intestine was focally adherent to the mesh and in another case the cecum showed tight and planar adhesion to the mesh. In contrast, 9 of 10 animals with cecal abrasion showed massive cecum-to-mesh adhesions (Figure 1D). 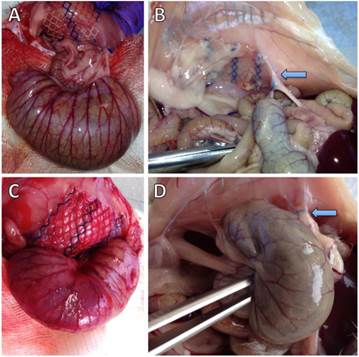 Macroscopic inspection of mesh ingrowth into the abdominal wall revealed a good integration in both groups without and with cecal abrasion. The impact of cecal abrasion on formation of intestine-to-mesh adhesions was evaluated by comparing scores as described above. Absolute score values were further translated into percentage of respective maximum scores (Table 1).

Lauder and total Hoffmann scores (absolute and percentaged) of all animals.

Incidence of cecum-to-mesh adhesions in rats with (P-ABRASE) and without (P-INTACT) cecal abrasion, evaluated with Lauder and total Hoffmann scores. The Lauder scoring scheme for measurement of adhesion formation takes into account number, strength, and distribution of adhesions and counts to a maximum score of 5, whereas the maximum Hoffmann score is 10. A combination of polypropylene mesh implantation and a de-peritonealization by cecal abrasion (P-ABRASE) resulted in a significantly increased adhesion score in both scoring systems compared to animals with unimpaired cecal peritoneum (P-INTACT) (p = 0.0002). 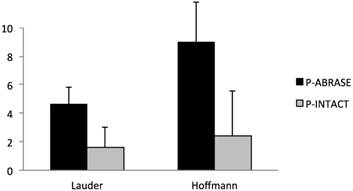 Representative histological findings in a rat without cecal abrasion are shown in Figures 3A and 3B. The mesh was integrated into the abdominal wall. Fibers of mesh were surrounded by granulating tissue indicating a foreign body reaction covered by loose sub-peritoneal tissue and a mono-layer cell coverage, such as in normal peritoneum (Figure 3A). Specimens of the cecum were sampled next to the area of mesh implantation. These revealed physiological histological structures (Figure 3B). In one representative P-ABRASE rat (Figure 3C) the ingrown mesh was directly adhesive to the cecal wall.

The mechanisms of adhesion induction are not yet fully understood. One potential adhesion trigger are foreign bodies e.g. meshes. In several animal studies in rodents, swine and sheep, meshes mostly were in contact to unimpaired visceral and parietal peritoneum 23-25. Other experimental setups mimic the formation of a hernia sac by creation of an abdominal wall defect 26-29. However, in patients, in which the content of the hernia sac has been dissolved from the hernia wall, another important factor for adhesion formation arises: the dissected areas inevitably will not have a peritoneal coverage. This peritoneal injury can lead to adhesion formation 30. Adhesions from mesh to the greater omentum occur quite frequently, but seem to be of limited consequence. In contrast, intestine-to-mesh adhesions can lead to severe problems, the most serious ones being fistula formation, infection and bowel obstruction. Hooker et al. 31 used an animal model for testing adhesion prevention strategies in IPOM surgery with local abrasion of small bowel. Other groups de-peritonealized the cecum to provoke adhesion formation after mesh implantation 32,33. Since the small intestine and cecum are mobile in the peritoneal cavity, our model additionally places a suture from the cecal mesenterium to the abdominal wall to ensure that mesh and injured peritoneum of abraded cecum stay in contact postoperatively. In addition, by using an uncoated polypropylene mesh, a high probability to induce adhesions could be expected 34. Consequently, our model imitates the clinical situation of a hernia mesh repair with IPOM combined with former adherent hernia sac content. By this, almost all animals with the uncoated polypropylene mesh and cecum depleted from peritoneum developed severe cecum-to-mesh adhesions within one week. However, rats, in which the peritoneum was left intact, had a low rate of intestine-to-mesh or intraabdominal fat-to-mesh adhesions. Histology revealed a detectable mono-cellular mesothelial layer covering the mesh suggesting a parietal re-peritonealisation as a sign of peritoneal healing within one week. The intraabdominal fat-to-mesh adhesions especially occurred at meshes' edges. We consider these adhesions comparable to omental adhesions in humans, as reported e.g. by Chelala et al. 35.

Our model with approximation of a polypropylene mesh implant to cecum w/o depletion of visceral peritoneum indicates that the condition of the intestinal surface has a particular impact on formation of intestine-to-mesh adhesions. Since mesh implantation combined with cecal abrasion induces adhesions with high reproducibility, our model is not only suitable for testing different mesh types and coatings, but also other anti-adhesive strategies for their effectiveness to prevent adhesions.

This study introduces a model mimicking the clinical IPOM situation when mesh comes in contact with normal and with de-peritonealized visceral organs. Even an uncoated polypropylene mesh provokes only sparse bowel adhesions as long as the intestinal peritoneum is intact. However, severe adhesions develop with high reproducibility when the peritoneal coverage is missing. This indicates that the integrity of peritoneum is a decisive for bowel to mesh adhesion formation. We suggest our model as a suitable basis for testing mesh types and coatings as well as other agents for their capability to prevent intraperitoneal adhesions.

21. Lauder CI, Garcea G, Strickland A, Maddern GJ. Use of a modified chitosan-dextran gel to prevent peritoneal adhesions in a rat model. The Journal of surgical research. 2011;171:877-82