Background: Hypertension, an important risk factor for the health of human being, is often accompanied by various comorbidities. However, the incidence patterns of those comorbidities have not been widely studied.

Aim: Applying big-data techniques on a large collection of electronic medical records, we investigated sex-specific and age-specific detection rates of some important comorbidities of hypertension, and sketched their relationships to reveal the risk for hypertension patients.

Methods: We collected a total of 6,371,963 hypertension-related medical records from 106 hospitals in 72 cities throughout China. Those records were reported to a National Center for Disease Control in China between 2011 and 2013. Based on the comprehensive and geographically distributed data set, we identified the top 20 comorbidities of hypertension, and disclosed the sex-specific and age-specific patterns of those comorbidities. A comorbidities network was constructed based on the frequency of co-occurrence relationships among those comorbidities.

Results: The top four comorbidities of hypertension were coronary heart disease, diabetes, hyperlipemia, and arteriosclerosis, whose detection rates were 21.71% (21.49% for men vs 21.95% for women), 16.00% (16.24% vs 15.74%), 13.81% (13.86% vs 13.76%), and 12.66% (12.25% vs 13.08%), respectively. The age-specific detection rates of comorbidities showed five unique patterns and also indicated that nephropathy, uremia, and anemia were significant risks for patients under 39 years of age. On the other hand, coronary heart disease, diabetes, arteriosclerosis, hyperlipemia, and cerebral infarction were more likely to occur in older patients. The comorbidity network that we constructed indicated that the top 20 comorbidities of hypertension had strong co-occurrence correlations.

Although the comorbidities of hypertension have been extensively studied, most existing research is based on medical surveys and public census data. Census data sets show aggregated facts of the general public without detailed information regarding individual patients. In contrast, medical surveys while include some individual level information usually involve a limited number of survey participants because of limited resources. Those surveys are often set for a confined geographical area (i.e., a city or a county), and thus cannot claim to be representative of a larger and broader area. Due to the nature of medical surveys, usually only certain types of participants are willing to reveal their private and sensitive medical related situations. People with a stronger sense of privacy are normally reluctant to reveal their medical history or health-related conditions. Therefore, medical surveys on a voluntary basis may have a biased participant population. The data points that are collected in a medical survey also largely depend on the participant's availability during the time of the survey, the participant's mood at the time, and the survey collector's attitude and human interaction skills. Too many human-related factors can affect the quality of medical surveys. Furthermore, to reduce the survey participant's reluctance, a medical survey is usually composed of a limited number of survey questions so that an interview or a questionnaire can be completed within a short time period. This greatly reduces the versatility of the survey when analyzing the survey results. In summary, because of the time-consuming and labor-intensive nature of medical surveys, the limited number of, and possibly biased, survey participants and survey questions can lead to biased analysis results, and possibly overlook important patterns and relationships in the occurrence of diseases.

Our data set was obtained from a Chinese National Surveillance System, which was initially implemented by the Chinese government in 2010. This surveillance system collects electronic medical records from hospitals and aims to oversee the overall health conditions of the Chinese population. Since 2010, this system has been adopted by 192 hospitals located throughout China. Although we had access to all 192 hospitals' data in the surveillance system, we intentionally excluded some hospitals that did not appear to present a sufficient and continuous data stream. Some obvious errors and incomplete data points were also removed to maintain the data integrity.

Eventually, we decided to use 6,371,963 hypertension-related high-quality data records from the 110,528,991 electronic medical records that we had access to. Those medical records were dated between 2011 and 2013, and were from 106 hospitals located in 72 cities in China (Figure S1). Those cities are geographically distributed in 29 of 31 provinces in China (excluding two underpopulated provinces, Qinghai and Ningxia). Our data set covers 33.90% of the city population in China. The city population data is based on the sixth Chinese population census published by the National Bureau of Statistics of the People's Republic of China (http://www.stats.gov.cn).

This study was approved by the institutional review board of the Institute of Automation, Chinese Academy of Sciences. The data set was collected by the Chinese government for disease control. All patients gave their informed consent. The patient's privacy was strictly preserved in our study. We only used the patient's sex, age, and clinical diagnostic information to perform our analysis. Patients' identity-related information was masked before we started our study.

The clinical diagnosis in the original electronic medical records was not coded using uniformed and standardized text terms. An example was that some doctors had used “upper infection” as an abbreviation for “upper respiratory tract infection” and others had chosen a different abbreviation for the same diagnosis. To standardize the diagnosis, we applied a natural language processing technique [29, 30] and developed several in-house Python scripts for Chinese text processing and mining. Python [31] has been proved an effective tool for handling similar tasks. Specifically for our study, each electronic medical record was automatically segmented into a series of Chinese words, and these words were then combined to form Chinese phrases according to the probability distribution of those words. In addition to automatic normalization of data, many text ambiguities and synonyms were handled manually. Finally, all medical diagnostic records were converted to standardized and coded diagnostic terms that could be easily manipulated and analyzed.

Detection rates of the top 20 comorbidities

Detection rates of the top 20 comorbidities of hypertension in China. 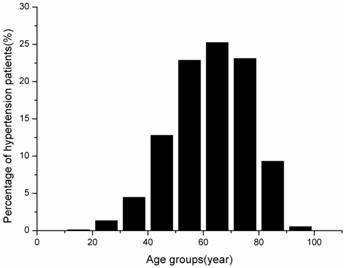 Sex-specific distribution of the top 20 comorbidities of hypertension in China.

Top five comorbidities of hypertension in each age group.

Age-specific patterns of the top 20 comorbidities of hypertension in China. 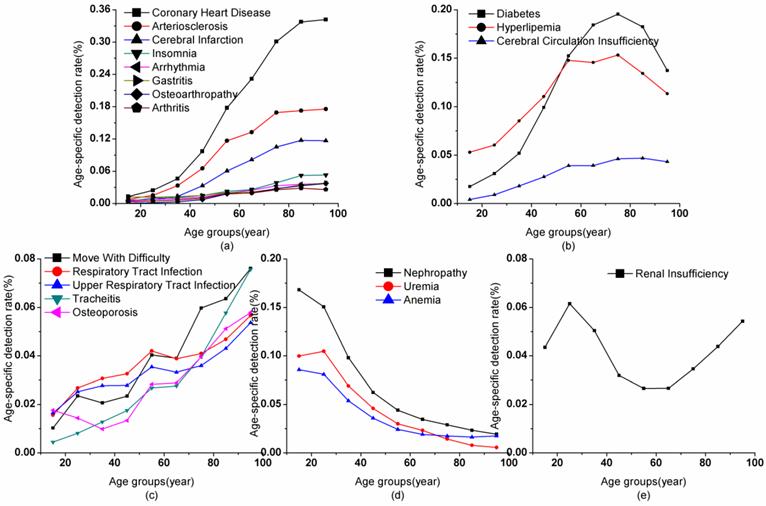 In our study, we obtained a large collection of electronic medical records from 106 prestigious hospitals located in 72 cities in China. The data collection process was mostly automatic and involved little human intervention. The automation of data collection ensured individual patient's medical records to be reliable, extensive, and timely. Compared with other similar research [1, 19, 20, 22], our study was based on a much larger patient base. Our data records were collected while patients were hospitalized, thus the records contained detailed and extensive coverage on patient's medical-related information. Because the medical-related information was for medical diagnostic purposes, the information was highly reliable and objective. 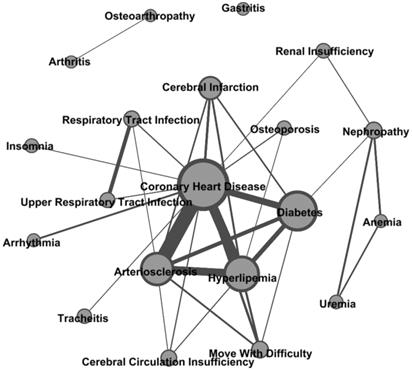 Currently, medically-aided diagnostic technologies primarily focus on preliminary statistics and a probabilistic computing system. In the era of large amounts of data, network-based recommendation technology continues to be developed. The characteristics of comorbidities that are calculated from a comorbidity network could provide valuable information about the relationships between each comorbidity pair. Our findings could rapidly promote the development of new diagnostic technologies, not only for hypertension, but also for other diseases.

There are limitations of this study. First, the detection rates achieved from different cities had shown different patterns. Further study, such as spatial analysis, could reveal the reasons for those differences. Second, some ambiguous or casually typed records were ignored due to the insufficiency of the natural language processing techniques that we had utilized. Adopting more effective text mining tools might increase the validity of rules that we used and the likelihood of finding new rules. Third, some seemingly unrelated or undetected patient symptoms might not have been completely and thoroughly recorded in the system. More detailed inspections on the medical data collection process need to be executed to ensure a more comprehensive data collection.

The authors declared that they had no competing interests.

12. Channanath AM, Farran B, Behbehani K, Thanaraj TA. State of Diabetes, Hypertension, and Comorbidity in Kuwait: Showcasing the Trends as Seen in Native Versus Expatriate Populations. Diabetes Care. 2013;36:E75-E