Background: Vascular calcification (VC) is a key process associated with cardiovascular mortality in dialysis patients. Gelsolin is an actin-binding protein that can modulate inflammation, correlated inversely with hemodialysis (HD) mortality and involved in bone calcification homeostasis. In this report, we aim to characterize progression in aortic arch calcification (AAC) and investigate its association with gelsolin.

Methods: 184 HD patients were enrolled and their annual posterior-anterior chest X-ray films (CXR) in 2009 and 2013 were examined. The severity of AAC was classified as grade 0 to 3. Blood levels of gelsolin were measured by ELISA kits. Biographic and biochemical data at baseline were analyzed with status of AAC at baseline and changes after 4 years.

Results: At baseline, 60% of the patients had detectable AAC on CXR. After 4 years, 77% had AAC. Patients with grade 1 and 2 AAC had increased risk of progression (Odds ratio [OR] 2~3, P=0.001) compared to those with grade 0 at baseline. Compared to those with no AAC, patients with AAC progression had older age, lower gelsolin, higher waist circumference and prevalence of vascular disease. Regression analysis confirmed baseline gelsolin (odds ratio 0.845, 95% confidence interval [0.734-0.974]) and waist circumference as the independent factors associated with AAC progression. Gelsolin is positively correlated with serum albumin and negatively with tumor necrosis factor-alpha.

Conclusion: Our study demonstrated that HD patients with grades 1 or 2 baseline AAC are at increased risk of further progression compared to those with grade 0. We also found lower blood levels of gelsolin associated with progressive AAC. Further investigation into the mechanistic roles of gelsolin in vascular calcification may provide new understanding of this key process.

Cardiovascular disease is the most common cause of death in patients on chronic dialysis [1]. Vascular calcification (VC) is increasingly recognized as a key process contributing to the high cardiovascular mortality in dialysis patients [2-4]. Our previous study on 712 prevalent hemodialysis (HD) patients showed a strong correlation between aortic arch calcification (AAC) and 10-year mortality [5]. It also substantiated the use of plain chest X-ray films (CXR) as a simple tool to evaluate AAC.

Recent studies reported that 26~78% of dialysis patients had various degrees of AAC on CXR, and 34~60% had progression after 1~5 years of follow-up [6-10]. These variations in the prevalence of calcification and its progression may be related to the differences in ethnicity, comorbidity, length of observation, and methods of assessment. Progression in VC has also been associated with mortality [6,7]. Factors contributing to VC include age, comorbidity (diabetes, hypertension, metabolic syndrome, dyslipidemia), dialysis vintage, medications (calcium, vitamin D, coumadin), and uremia-related mineral bone disorder (serum calcium [Ca], phosphorus [P], parathyroid hormone [PTH]) [11-15]. Markers of inflammation and oxidative stress have also been implicated [16,17].

Gelsolin, by regulating intracellular actin filaments, is important in cell morphology, migration and phagocytosis [18]. Its extracellular isoform, plasma gelsolin is secreted by different types of cells and serves as a scavenging system for potentially toxic actin filaments [19]. It can localize inflammation and minimize tissue damage by binding excessive actins released from tissue injury. The phenomenon of plasma gelsolin depletion has been observed in different diseases. Specifically, in patients with acute myocardial infarction and fulminant hepatic failure, plasma gelsolin levels dropped dramatically and recovered if organ function improved from injury [20]. Further research found that in addition to actin, plasma gelsolin may also modulate immune response by binding to key inflammatory mediators, including lipopolysaccharide, lysophospholipids, and platelet activating factor [21,22].

Furthermore, gelsolin interacts with osteopontin and both are involved in bone homeostasis [23]. In HD patients, plasma gelsolin levels were reduced nearly 50% compared to healthy volunteers and correlated with mortality and protein-energy wasting [24,25]. However, whether gelsolin have independent roles in vascular calcification is uncertain, and strategies to reduce inflammation and protect vascular integrity are poorly defined. In this report, we aim to characterize the progression of aortic arch calcification in HD patients and investigate its associations with novel biomarker gelsolin.

From January to December 2009, we enrolled 184 stable HD patients from Kaohsiung Chang Gung Memorial Hospital. Inclusion criteria were over 20 years of age and regular 4-hour HD session three times a week for at least 6 months. Exclusion criteria were chronic viral hepatitis, malignancy (within 5 years), acute infection or hospitalization (within three months). This study was approved by the Institutional Review Boards and Ethics Committee in Chang Gung Memorial Hospital (IRB No. 98-2685B), and informed consents were obtained from all participants.

For every study participant, blood samples were collected. The averages of biochemical data were obtained over the three months prior to study enrollment. The adequacy of dialysis was assessed by Kt/V urea using the urea kinetic model of Gotch [26]. Gelsolin levels in blood were measured with ELISA kits from Critical Biologics Corporation (Cambridge, MA. USA). The immunoassay kits for interleukin-6 (IL-6) and tumor necrosis factor-alpha (TNF-α) were from R&D Systems, Minneapolis, MN. USA. All measurements were done in duplicate. All patients' medical records were carefully reviewed. Vascular disease was identified by documented history of ischemic heart disease, cerebrovascular disease or peripheral vascular disease.

Evaluation of AAC on Chest Radiography

Our HD patients have chest X-ray examinations (posterior-anterior approach, standing) annually. For each study participant, the routine annual chest X-ray film in 2009 was selected as the baseline. A second follow-up chest X-ray film was selected in 2013 or the year when the patient reached outcomes such as death, kidney transplantation or transfer to other dialysis centers. A simple classification by Symeonidis et al. [27] was used to evaluate AAC in the present study. Briefly, the severity of calcification was classified as grade (Gr.) 0 (no calcification visible), Gr. 1 (single thin or small spots of calcification), Gr. 2 (one or more areas of thick calcification, but ≤ 50% of the circular area of the aortic knob) and Gr. 3 (circular calcification with >50% of circular area of the aortic knob).

Each posterior-anterior (P-A) chest X-ray (CXR) of these HD patients was read and graded independently by two readers (one nephrologist and one trained nurse practitioner) blinded to the patients' clinical data. Eight X-rays were graded differently on calcification score (±1). The discrepancies between the two observers were resolved by a third independent reader. The progression of aortic calcification was determined by comparing the grades at baseline and at follow-up. “Progressive AAC” was defined if the second chest X-ray's grade is greater than the first one. “Stable AAC” was defined if the first CXR showed calcification and the second CXR had the same calcification grade. “No AAC” group was defined if both the first and second CXR's were grade 0.

Aortic arch calcification and its progression

Distribution of different grades of aortic arch calcification (AAC) at (A) baseline and (B) after 4 years of follow-up. 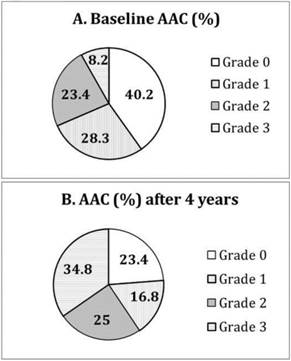 Factors associated with aortic arch calcification and its progression

This study on 184 prevalent HD patients had two major findings. First, the severity of AAC on plain chest X-ray confers different risks for AAC progression and vascular disease. Patients with higher grade AAC at baseline had higher risk of progression, and subjects with AAC progression have higher rate of vascular disease. Second, baseline gelsolin level was independently associated with progression in AAC. Other important factors of AAC and progression were serum albumin and waist circumference.

Comparison between 3 groups of patients (no AAC, stable AAC and progressive AAC) after 4 years of follow-up.

Our study demonstrated that AAC is common in HD patients, 60% at baseline and 77% after 4 years of follow-up. In addition, we showed that progression in AAC is associated with higher prevalence of vascular disease. Sigrist et al. [12], using multislice computed tomography to quantify calcification in superficial femoral artery reported a constant progression rate over the first and second years of observation. Their study examined a heterogeneous group of 101 patients with stage 4 CKD, HD and peritoneal dialysis. However, from our cohort of HD patients, we found that progression in AAC over a longer time period (4 years) is dependent on the initial calcification status. Less than half of those with no evident AAC on baseline CXR developed calcification over 4 years of follow-up. However, 73% of those with baseline grade 1 AAC and 84% of those with grade 2 had more severe calcification over the same period. This observation suggests that when AAC becomes evident on CXR, the risk of progression is much higher. This has several important clinical implications. First, the progression of AAC may not be the same for everyone over 4 years, which makes risk stratification and timing of intervention extremely crucial: the later stage we intervene, the less time we may have to deliver an effective therapy. Second, routine assessment of AAC will help identify patients at increased risk of progression in vascular calcification. Third, plain chest X-ray is an easily attainable yet powerful tool in the assessment of vascular calcification and its risk of progression. 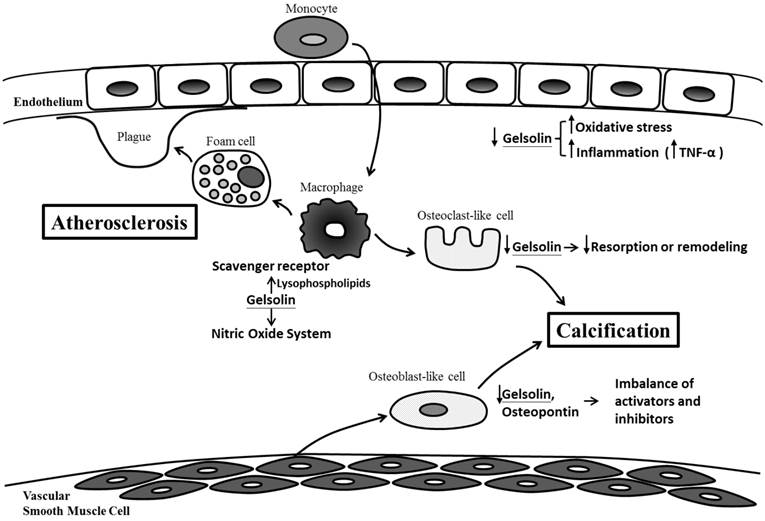 Macrophage is a key player in the process of inflammation and atherosclerosis. Gelsolin can alter macrophage function by triggering nitric oxide synthase, leading to reduced inflammation [30]. In animal models of sepsis, supplementation with recombinant human plasma gelsolin (rhu-pGSN) to restore its depleted level can provide favorable inflammatory modulation and survival benefits [31]. Gelsolin can also modulate cellular responses to lysophospholipids which interact with macrophage receptors and mediate atherosclerosis [21,32]. Indeed, gelsolin expression was reduced in the media layer of human atherosclerotic coronary arteries [33], and its secretion into the ex vivo culture medium was also decreased [34]. This depletion of gelsolin may have consequences in vascular functions. In atherosclerosis and CKD, depletion of gelsolin may impair ligand interaction with macrophage receptors, the modulation on nitric oxide system, and the buffering capacity for inflammatory mediators. Ours and other studies also support the connections between alterations in gelsolin levels and inflammation, oxidative stress, and production of reactive oxygen species [35-37]. In addition to its role as a novel biomarker, gelsolin has therapeutic potential. In mouse models of sepsis and multiple sclerosis where gelsolin levels were depleted, administration of recombinant gelsolin proteins improved survival and brain inflammation [31,40]. In a recent preliminary clinical trial, the safety of rhu-pGSN was established in humans [38].

In addition to the characterization of AAC and its progression over 4 years, our study also explored the important factors associated with these phenomena. In our study, markers of mineral bone metabolism (Ca, P, iPTH) were not associated with AAC and its progression. This is likely because our patients were in good control from this perspective. However, despite keeping their serum Ca, P, PTH within the guideline recommendations, these patients still have high rate of AAC and progression. It should be emphasized that other important factors must be involved. Gelsolin, the novel protein may be one of these key players in AAC. Our analysis also showed that lower serum albumin is associated with baseline AAC. Moreover, higher waist circumference is associated with AAC progression. Increased waist circumference suggests increased abdominal adiposity, which is also associated with coronary artery calcification in CKD patients [39].

Our study has several limitations. First, using plain CXR and 4-grade scoring method to evaluate the severity of vascular calcification may underestimate or miss some subtle calcification and changes. CT scan would offer a much higher resolution, a finer differentiation of calcification, but more costly. Secondly, our study does not have detailed accounts of patients' medications because they may have various sources of medications outside of our dialysis center. Lastly, our study results may not be generalizable to patients of different ethnicity or other modality of renal replacement therapy.

In conclusion, our study found that AAC based on plain CXR was common in HD patients. Patients with initially higher grades of AAC are at increased risk of further progression, which is associated with higher risk of vascular disease. Our identification of plasma gelsolin as a novel protein associated with progression in VC warrants further confirmation in larger population and may offer new understanding and therapeutic strategies toward vascular injuries and calcification.