Increased oxidative stress and intracellular accumulation of reactive oxygen species (ROS) lead to impaired cell function, cell death, and are associated with a wide variety of systemic diseases [1-3]. With the electron transport chain being the major source for the generation of ROS, controlled “mild uncoupling” of the proton gradient of the inner mitochondrial membrane by uncoupling proteins (UCPs) is thought to ameliorate the burden of oxidative stress [4-7]. Besides others, chronic alcohol consumption is a potent inducer of oxidative stress in multiple tissues [1, 8-11]. Previously we could show that chronic alcohol consumption increased the expression of UCP-2 and -4 in the rat brain [12]. Therefore, UCPs with their potential to regulate ROS production can be interesting targets for the protection from ethanol induced cell stress.

Chronic alcohol consumption leads to an increased susceptibility to infections [13]. UCP-2 is expressed ubiquitously and was shown to have regulatory properties in immunity and inflammatory responses to pathogens [14-16]. In rodents, UCP-2 shows highest expression levels in macrophage-rich organs such as the lungs and the spleen [14, 17]. This led us to analyse the effects of chronic ethanol consumption on UCP-2 expression levels in these organs in a model of chronic alcohol consumption in rats. The results are discussed with regard to the possible functions of UCP-2.

Animal experiments were approved by the state authorities for animal welfare (G 0259/08, LAGeSo Berlin, Germany) and followed institutional guidelines of the Charité-Universitätsmedizin Berlin, Germany. A rat model of chronic alcohol consumption was used as described previously [12]. Briefly, using the Lieber-DeCarli liquid diet technique, 34 male six-week-old Wistar rats were randomly assigned into a control and an alcohol treated group [18]. The diet contained ethanol 5% (v/v) for the alcohol treated group (n=17) and a corresponding isocaloric diet with maltose-dextrin for the control group (n=17). Blood alcohol levels were checked by regular 200 µl-blood samples taken from the tail vein. Rats were anesthetized with isoflurane and sacrificed by cervical dislocation after 12 weeks. Lungs and spleen were removed, immediately frozen and stored at -80 °C for subsequent processing. The number of animals used in each experiment is shown in the figure legends.

Experiments were performed in 10-12 animals per group (n=10-12). Data were analyzed using IBM SPSS Statistics (IBM, Frankfurt, Germany) and presented as mean ± standard error (SEM). Comparisons among groups were made using the Mann-Whitney U test. A p-value <0.05 was considered statistically significant.

To study ethanol affected UCP-2 gene expression, we performed quantitative real-time polymerase chain reactions of whole lungs and spleen total RNA isolates. To assess differences in UCP-2 protein expression between animals with and without a chronic ethanol containing diet, Western blots of mitochondrial and cytosolic isolates of whole lung and spleen tissue were performed. Compared to control animals, rats that were fed with an ethanol containing diet for 12 weeks showed no difference of UCP-2 protein expression (Fig. 1A - D) and UCP-2 mRNA expression levels (Fig. 1E - F) in both organs.

To prove ethanol-induced cell stress we performed Western blots against cytochrome c protein in the cytoplasm and in mitochondrial isolates. Chronic ethanol consumption led to a higher cytochrome c release in the rat lung (Fig. 2C; p=0.017). Similarly cytochrome c release was higher in the spleen of rats chronically fed with an alcohol diet (Fig. 2D; p=0.041). Significantly less cytochrome c could be detected in mitochondria of the ethanol group compared with mitochondria of the control group (p=0.046 for lung, Fig. 2G and p=0.028 for spleen, Fig. 2H). Fig. 2A, B and 2E, F show representative Western blots of a pair of rats demonstrating the protein content of lung and spleen cytosolic (Fig. 2A, B) and mitochondrial (Fig. 2E, F) cytochrome c.

Chronic alcohol consumption does not affect the expression of UCP-2 in the lung or the spleen. UCP-2 protein expression was measured by Western blot analysis in lung and spleen mitochondrial extracts of ethanol treated and control rats. UCP-2 gene expression was analysed by quantitative real-time polymerase chain reaction. Representative Western blot of lung (1A) and spleen (1B) tissue of a pair of ethanol treated and control rats. Dose-response curves for the lung (1C) and the spleen (1D). Results are mean ± SEM (n=8-10). Gene expression of UCP-2 in the lung (1E) and the spleen (1F) of a control- and an alcohol-fed group. Results are mean ± SEM (n=8-12). Chronic alcohol consumption resulted in no increased gene and protein expression of UCP-2 in both analysed organs. The experiments were repeated and similar results were obtained. VDAC served as a control for equal protein loading. 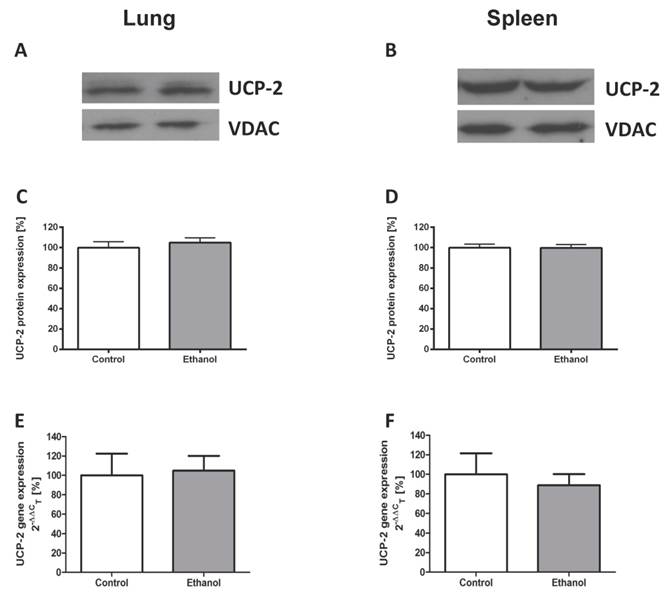 With this model of chronically alcohol consuming Wistar rats we could demonstrate that chronic alcohol consumption has no regulatory effects on the expression of UCP-2 in the lungs or the spleen.

This differs to findings in brain tissue where an upregulation of UCP-2 and UCP-4 was detected for rats that were subjected to chronic alcohol consumption [12].

Generally, UCP-2 is regulated differently on mRNA and protein level upon oxidative stress [17]. In organs with high UCP-2 mRNA expression the mitochondria do not necessarily contain high amounts of UCP-2 protein [15, 17, 20]. The organs analyzed in this study are tissues with high baseline UCP-2 mRNA expression in rats [14]. Although reports on tissue distribution of UCP-2 protein vary, UCP-2 protein could always be detected in the spleen and the lungs [15-17]. However, neither on mRNA level nor on protein level a change in the expression levels could be noted upon ethanol-induced cell stress.

Chronic alcohol consumption predisposes to bacterial infections predominantly pneumonias [21]. It also leads to an increased susceptibility to systemic bacterial infections and significantly lowers the numbers and alters the biological functions of immune cells in the spleen [22-23]. Chronic alcohol consumption augments production of pro-inflammatory cytokines and impairs the induction of the adaptive immune response by the monocyte/macrophage system [13]. In mice, immune cells are responsible for total basal UCP-2 expression in the spleen and a third of UCP-2 expression in the lungs [24]. At an early phase of infection down-regulation of UCP-2 allows macrophages to produce more ROS associated with secretion of more pro-inflammatory cytokines [16]. However, at the late stage of the immune response after LPS-injection in mice, UCP-2 is upregulated in lungs and spleen probably to protect the cells against an excess of ROS [24]. As chronic alcohol consumption increases oxidative stress but also impairs the functions of alveolar and splenic macrophages, further increase of already high basal UCP-2 expression could lead to a potentially lethal decline of ATP production in the alveolar and splenic macrophages.

The lung, where UCP-2 is not only expressed by immune cells, is equipped with enzymes that can neutralize free radicals, for example enzymes like superoxide dismutase, catalase, glutathione peroxidase and glutathione reductase as well as with non-enzymatic systems like vitamin E or ascorbic acid [25]. Therefore, lung tissue has a stock of antioxidative defence systems ready to cope with increased doses of oxidative stress. Accordingly, reduced pulmonary levels of glutathione are a key element of alcoholic lung disease [26]. 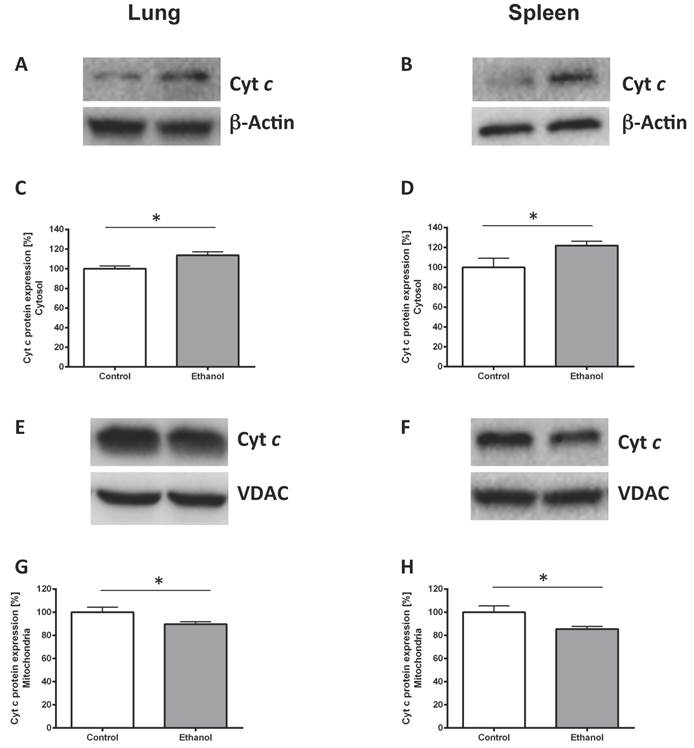 As chronic alcohol consumption increased pulmonary and splenic cell damage but UCP-2 expression in these organs remained unchanged, it needs to be taken into consideration, that in organs with high ATP demand and a high baseline UCP-2-expression, further induction of UCP-2 can lead to an unnecessary decline of ATP production.

The upregulation of UCP-2 after chronic alcohol ingestion that was seen in brain tissue is not reflected in organs with high mRNA and protein expression levels of UCP-2. Therefore, the regulative effect of chronic alcohol consumption on UCP-2 expression is tissue-specific.

4. Boveris A, Chance B. The mitochondrial generation of hydrogen peroxide. General properties and effect of hyperbaric oxygen. Biochem J. 1973;134:707-716