Chronic psychologic stress is a major health concern worldwide as it affects multiple physiologic systems. Stress is a risk factor for several different diseases, including inflammatory disease, hypertension, cardiovascular disease, obesity, diabetes, atherosclerosis, cancer, as well as neurodegenerative diseases [1-3]. Exposure to psychologic stressors activates the central hypothalamic-pituitary-adrenocortical (HPA) axis [4], leading to the synthesis and release of corticotropin-releasing hormone, which increases the secretion of adrenocorticotropic hormone. Adrenocorticotropic hormone stimulates the synthesis and release of glucocorticoids into the systemic circulation.

Osteoporosis is an increasingly common skeletal disease that increases the risk of fracture, characterized by low bone mass and bone structure deterioration [5]. Several factors are implicated in the development of osteoporosis, such as menopause, Caucasian or Asian race, thin skeletal frame, physical inactivity, smoking, alcohol use, inadequate calcium and vitamin D intake, corticosteroid treatment, and certain medical conditions [5-7]. Extensive evidence from both animal and human studies indicates an association between chronic psychologic stress and osteoporosis [8-10], suggesting that stress may aggravate or trigger bone density loss [11]. High glucocorticoid levels inhibit osteoblast differentiation and bone formation, and induce osteoblast apoptosis, thereby suppressing bone growth [12, 13], while at the same time extending the lifespan of mature osteoclasts, leading to an imbalance in the osteoblast-osteoclast ratio and eventual bone density loss.

Chewing is important not only for food intake, but also for mental, physical, and physiologic functions of the body [14-17]. The act of chewing defends against various stressors by suppressing the neuroendocrine stress response in the HPA axis [18-22]. The effect of chewing to suppress activation of the HPA axis suggests that chewing during exposure to stress could attenuate chronic stress-induced bone loss. We recently reported that senescence-accelerated mouse strain 8 (SAMP8) exposed to chronic stress exhibited bone loss. We therefore hypothesized that allowing mice to chew on a wooden stick during exposure to chronic stress could ameliorate the stress-induced bone loss [23].

Male B6 mice (12 months of age) were purchased from Japan SLC Inc. (Shizuoka, Japan) and housed in the Division of Animal Experiments, Asahi University School of Dentistry under temperature- and humidity-controlled conditions (23±1°C, 55±25%) and a 12:12 h light/dark cycle (light period, 6:00-18:00; dark period, 18:00-6:00). A standard rodent pellet chow (CE-2, CLEA Japan, Inc., Tokyo, Japan) containing 1.03% calcium and 0.97% phosphorus was provided to the mice ad libitum. All experiments were performed according to the guidelines for the care and use of laboratory animals of Asahi University. The mice were randomly distributed into control, stress, and stress/chewing groups (n=10/group). Mice were exposed to stress for 60 min, twice a day, for 4 weeks by placing them in a ventilated plastic restraint tube (inner diameter: 3.5 cm), in which they could move back and forth but not turn around, as previously reported [18, 23]. While in the restraint tube, the mice were also subjected daily to either water immersion, physical shaking, or flashing lights. To prevent habituation and provide an unpredictable aspect to the stressors, all stressors and/or sequences were administered at different times of the day. Mice in the stress/chewing group were allowed to chew on a wooden stick (diameter: 2 mm), made from virgin white birch tree, for 60 min, twice a day during the experimental period [18, 23]. The wooden sticks were examined for signs of chewing at the end of the experimental period and all of them showed signs of chewing.

Mouse femurs and fourth lumbar vertebrae (L4) were dissected by removing adherent soft tissues and then maintained in sealed plastic bags at -20°C. Trabecular microstructure was analyzed using a cone-beam X-ray micro-CT system (MCTCB100MF, Hitachi Medical Corporation, Kashiwa, Japan) as described previously [23, 28-30]. The L4 vertebral body and distal femur were scanned at 10-µm resolution with a tube voltage of 50 kV, a tube current of 0.1 mA, and a voxel size of 10 µm. After scanning, the micro-CT image data was transferred to a workstation. The region of interest was defined using 100 slices at approximately 0.5-2.0 mm away from the growth plate of the distal femur. The trabecular bone area of the vertebral body was outlined for each micro-CT slice, excluding the cranial and caudal endplate regions. Within these regions, trabecular bone was separated from cortical bone with boundaries defined by the endocortical bone surfaces. The structural indices were calculated using three-dimensional (3D) trabecular bone analysis software TRI/3D-BON (Ratoc System Engineering Co. Ltd., Tokyo, Japan), which constructs 3D models from serial tomographic datasets for visualization and morphometric analysis, as described previously [23, 30].

All data are reported as mean ± SD. The statistical analysis was performed using SPSS version 14 (Chicago, IL, USA). A one-way analysis of variance was used to compare trabecular and cortical microstructural parameters in the control, stress, and stress/chewing groups. If the F test indicated significance, Fisher's protected least significant differences test was used for post hoc multiple comparisons. P value of less than 0.05 was considered to indicate statistical significance.

The serum biochemical parameters. (A) Corticosterone, (B) Osteocalcin, and (C) N-telopeptide of type collagen (NTx) levels in the control, stress and stress with chewing mice. All data represent as mean±SD. *P < 0.05. BCE: Bone Collagen Equivalents. 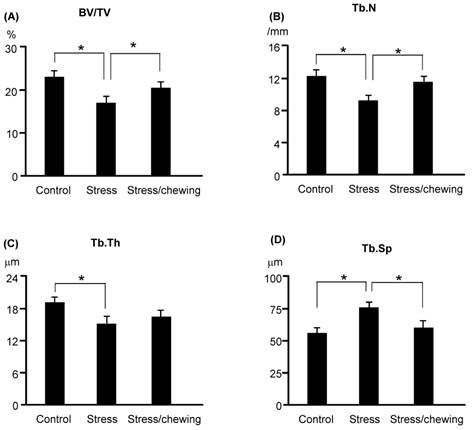 Three-dimensional micro-CT images representative the fourth lumbar vertebral body in the control (A), stress (B), and stress with chewing (C) mice. Images of the sample with the BV/TV that was closest to the mean BV/TV were presented in each group. Scale bar: 0.3 mm. 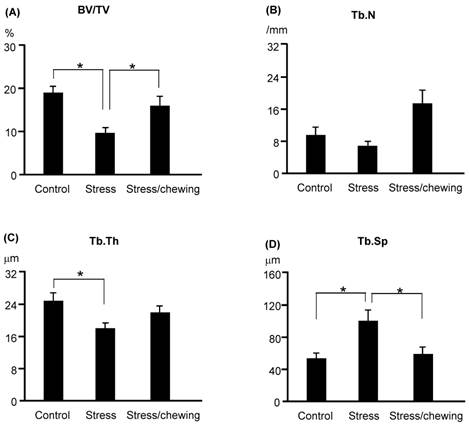 The bone remodeling parameters in the control, stress, and stress with chewing mice. (A) The bone formation rate (BFR/BS), (B) The osteoclast number (N.Oc/BS), and (C) The osteoclast surface (Oc.S/BS). All data represent as mean±SD. *P < 0.05.

The results of the present study were consistent with findings from controlled studies in both humans and experimental animals suggest that exposure to various chronic stressful stimuli inhibits osteocalcin level, decreases osteoblast bone formation, and leads to bone loss [8-10]. In B6 mice, serum osteocalcin levels were significantly decreased after exposure to chronic stress for 4 weeks. Chronic stress induced a significant reduction of trabecular bone mass both in the distal femur and vertebral body. Based on histomorphometric measurements, exposure to chronic stress led to a decrease in BV/TV, Tb.N, and Tb.Th, and an increase in Tb.Sp. Chronic stress exposure reduces BV/TV in the distal femur by its effects to decrease Tb.Th and increase Tb.Sp, whereas it leads to reduction in BV/TV in the vertebra by its effects to decrease both Tb.N and Tb.Th, and increase Tb.Sp. These effects of stress on trabecular bone loss are consistent with those observed in osteoporotic patients [28, 33, 34]. Bone remodeling, in which the resorption phase is followed by the reformation phase, occurs continuously and is strictly regulated by various factors. Exposure to various chronic stressors, such as restraint, immobilization, forced swimming, noise, crowding, and social stress leads to sustained increases in serum corticosterone levels in rodents [9, 35]. Consistent with this, adrenalectomy abolishes chronic stress-induced behavioral depression and bone loss, supporting the involvement of glucocorticoids in these effects [9]. Increased apoptosis of osteoblasts and osteocytes along with an increased life span of osteoclasts leads to decreased bone mass as well as decreased bone strength [7]. Several recent investigations demonstrated that active mastication inhibits some stress-induced effects in rodents, such as increases in noradrenaline turnover in the rat hypothalamus, limbic regions, and amygdala, and impaired spatial memory resulting from glucocorticoid receptor expression in the hippocampus [21, 22]. Active chewing also attenuates the stress-induced increase in serum corticosterone levels [18, 20], rescues stress-impaired hippocampal functions, and improves stress-induced spatial memory [12, 18, 20]. Active mastication also attenuates sympathetic hyperactivity during stress and prevents post-stress arrhythmias [20]. The findings of the present study indicated that active mastication significantly improved bone loss and bone density loss induced by exposure to chronic stress.

This work was supported by a Grant-in-Aid for Scientific Research from the Ministry of Education, Science, and Culture of Japan (26462916). The authors thank Dr. Ken-ichi Tezuka, Department of Tissue and Organ Development, Gifu University Graduate School of Medicine, for providing the micro-CT system used in this study.

3. Reber SO. Stress and animal models of inflammatory bowel disease-an update on the role of the hypothalamo-pituitary-adrenal axis. Psychoneuroendocrinology. 2012;37:1-19

12. Weinstein RS, Jilka RL, Parfitt AM, Manolagas SC. Inhibition of osteoblastogenesis and promotion of apoptosis of osteoblasts and osteocytes by glucocorticoids. Potential mechanisms of their deleterious effects on bone. J Clin Invest. 1998;102:274-282