Acute promyelocytic leukemia (APL) is a subtype of acute myeloid leukemia (AML). With the application of all-trans retinoic acid (ATRA) and arsenic trioxide (ATO), APL becomes one of best prognosis of leukemia. However, ATRA and ATO are not effective against all APLs. Therefore, a new strategy for APL treatment is necessary. Here, we investigated whether lithium chloride (LiCl), a drug used for the treatment of mental illness, could promote apoptosis in human leukemia NB4 cells. We observed that treatment with LiCl significantly accelerated apoptosis in NB4 cells and led to cell cycle arrest at G2/M phase. Moreover, LiCl significantly increased the level of Ser9-phosphorylated glycogen synthase kinase 3β(p-GSK-3β), and decreased the level of Akt1 protein in a dose-dependent manner. In addition, LiCl inhibition of c-Myc also enhanced cell death with a concomitant increase in β-catnin. Taken together, these findings demonstrated that LiCl promoted apoptosis in NB4 cells through the Akt signaling pathway and that G2/M phase arrest was induced by increase of p-GSK-3β(S9).

Acute promyelocytic leukemia (APL) is a unique model in cancer biology in that two therapeutic agents, ATRA and ATO. ATRA could induce differentiation and ATO could promote apoptosis in APL cells [1-6]. Although the complete remission rate of APL is over 90%, 10-30% of APL patients are not sensitive to ATRA and ATO [7]. Hence, it is important to explore new treatment strategies for APL.

Lithium chloride is one of the main drugs used for the treatment of bipolar disorder, and the antineoplastic effect of lithium is thought to be attributed to the inhibition of glycogen synthase kinase-3 (GSK-3), a type of multi-functional Silk/threonine protein kinase, generally exists in all eukaryotic cells, which plays an important role in multiple signaling pathway [8]. One of the most important ways regulated by GSK-3 is the Wnt singaling pathway, and GSK-3 also interacts with the Ras/PI3K/Akt/mTOR pathways. Previous studies have shown that lithium could increase the number of long-term hematopoietic stem cells in vivo [9]. Moreover, treatment with lithium results in an increase in peripheral blood CD34+ cells in patients [10], and it is also known to influence the prolifertion, apoptosis and cell cycle in different cell lines, such as esophageal cancer, medullary thyroid tumor, endometrial cancer and adenocarcinoma ductal pancreatic [11-15].

In this study, we demonstrate the apoptotic effect of lithium in an NB4 cell line, examine the potential mechanism underlying this effect, and elucidate the role of GSK-3β in this process. Our observations suggest that lithium chloride could provide a new therapeutic approach for the treatment of APL.

The human leukemia celll line were pruchased from the Shanghai Institute for Biological Science and maintained in RIPA-1640 supplemented containing 10% fetal bovine serum in an environment with 5% CO2 at 37 °C.

To assess cell viability, NB4 cells in each group were seeded in 96-well plates at a density of 5.0×103 cells/well. Then cells were incubated with viraous concentrations of Licl for 24h. In brief, 10 μl of CCK-8(7Sea Cell Counting Kit; Sevenseas Futai Biotechnology Co., Ltd.,Shanghai,China) was added to each well followed by incubation for 2h at 37 °C. The cell viability was assessed by detection of absorbance at 450 nm using a spectrophotometer. Cells growth curves were plotted. The experiment was repeated at least three times.

Cells with treatment of different concentrations of lithium chloride were harvested by centrifugation at 3000 g for 5 min. After washing twice with pre-cold PBS (pH 7.4), cells were re-suspended in Binding Buffer(Sungene Biotech Co., Ltd.,Tianjing,China), and then stained by Annexin V-PE and 7-AAD (Sungene Biotech Co., Ltd.,Tianjing,China) for 5-15 min at room temperature. At last, these cells were subjected to flow cytometer (Becton Dickinson, CA, USA) for detection of apoptotic cells. Each experiment was repeated at least three times.

Cells were fixed in 75% ethanol overnight at -20℃ and washed in PBS and then further incubated with 50 ul propidiumiodide for 15min at room temperature.Then cells were analysis in flow cytometer. Each experiment was repeated at least three times.

1x106 cells in each group were washed with ice-cold phosphate-buffered saline and lysed in RIPA solution containing protease inhibitor cocktail. Protein concentration was determined with BCA method. A total of 80 μg of protein was added in 8% sodium dodecyl sulfate-polyacrylamide gel, and then transferred to polyvinylidene difluoride membrane. The membrane was blocked with 5% non-fat milk for 2 h, then incubated with specific antibodies(monoclonal antibody against Akt1;1:1000; Abcam,Hong Kong,China, monoclnal antibodies against β-catenin, GSK3β, p-GSK3-β (S9), c-Myc; 1:1000;Cell Signaling Technology,USA) overnight at 4 °C and then with secondary antibody(goat anti-rabbit antibody, 1:1000, Zhongshan Goldenbridge Biotechnology Co., Ltd., Beijing, China) for 1 h at 37 °C. After washing with Tris-Buffered Saline Tween-20 (TBST), the autoradiograms were scanned and subjected to densitometry. β-actin(mouse monoclonal antibody against β-actin, 1:500; Zhongshan Goldenbridge Biotechnology Co., Ltd., Beijing, China) was used as an internal control. Protein bands were visualized using the Quantity One Software (BIO-RAD, USA). Each experiment was repeated at least three times.

Data was expressed as means ± standard deviation (SD). Statistical analysis was performed with SPSS version 17.0. Independent sample t test was employed for comparing the means between two groups. A value of P<0.05 was considered statistically significant.

CCK-8 assay showed that, treatment of NB4 cells with 0-40 mM Licl for 24h induced was significantly inhibited in a dose-dependent manner and the highest inhibition is at the concentration of 40mM. NaCl was severed as a control (Figure 1).

NB4 cells were treated with 20mM LiCl for 24h,untreated and treated with 20mM NaCl as control group.As is shown in Figure 2,the apoptosis rate of untreated/NaCl group was significantly lower than that of LiCl group.These results indicated that Licl could promote NB4 cells to apoptosis at the concentration of 20 mM (Figure 2). 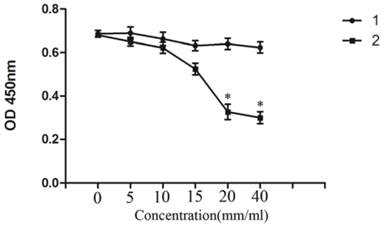 Expression of related proteins in NB4 cells induced by LiCl

LiCl improve apoptosis in NB4 cells. A and B, 1x106 NB4 cells were treated with LiCl at the concentration of 20 mM in 6-well plate for 24h.After treatment, apoptosis was detected by flow cytometry. The number of apoptosis cells was expressed as % of total cell number. Data was expressed as means ± SD.*P<0.05

LiCl induces G2/M arrest. A and B NB4 cells were treated with 20mM LiCl/NaCl for 24h.PBS and NaCl was served as controls. Cells were harvested for analysis of cell cycle distribution by flow cytometry. Data was expressed as means ± SD.*P<0.05. 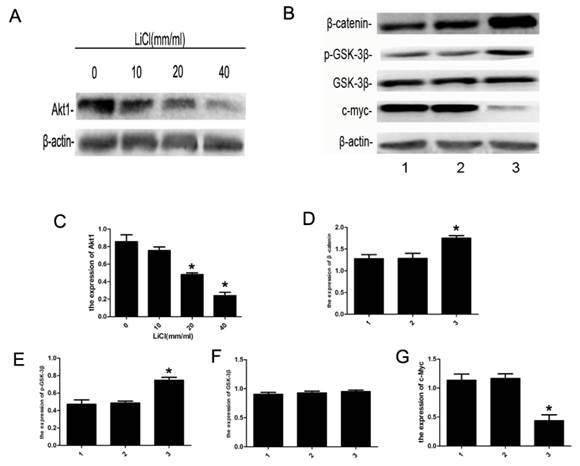 The intensive study of APL pathogenesis has resulted in the current treatment breakthroughs. Although the prognosis for APL has been greatly improved, compared to that of other malignant tumor types, by the application of ATRA and ATO, leukocytosis and retinoic acid resistance do occur in some cases of ATRA treatment [1-7]. Hence, it is important to invest efforts into developing therapies that are more effective. GSK-3, an important regulator of multiple signaling pathways, has two isoforms in vivo, GSK-3α and GSK-3β, which are highly conserved in their catalytic domains but possess specific functions [16,17]. The level of p-GSK-3β at ser9 is high in oral squamous cell carcinoma, hepatocellular carcinoma cells and ovarian cancer cells [18-20], Since lithium is a specific inhibitor of GSK-3, it has been widely used in the study of the biological function of GSK-3β by increasing the phosphorylation of GSK-3β at Ser9 [21]. However, the mechanism by which LiCl inhibits the activity of GSK-3β is not fully understood at present. In addition, LiCl has been demonstrated to induce death in B-cell precursor acute lymphoblastic leukemia (BCP-ALL) cells [22]. Therefore, we sought to examine the effect of LiCl on NB4 cells.

The proliferation and apoptosis of leukemia cells treated with LiCl were examined in vitro. The CCK-8 array showed that the proliferation was significantly inhibited by LiCl in a dose-dependent manner, compared with that observed in the controls (Figure 1). These results indicated that LiCl could inhibite the proliferation of NB4 cells. Interestingly, lithium has been reported to induce apoptosis in pancreatic ductal adenocarcinoma cell lines[15] and G2/M arrest in hepatocellular carcinoma cells, endometrial cancer cell lines and non-small cell lung cancer A549 cells[14,15,23,24]. In addition, LiCl promoted apoptosis of NB4 cells, as deteced by flow cytometry (Figure 2). As shown in Figure 3, our data indicates that cell cycle arrest at the G2/M phase is induced by LiCl treatment.

In order to investigate the mechanism of LiCl-induced apoptosis, apoptosis-related proteins and components of the signaling pathways were detected by western blot analysis. Our results indicate the involvement of the Akt pathway. Akt1, also known as Akt or protein kinase B (PKB), plays an important role in controlling cell growth, apoptosis, cell cycly regulation, and other biological processes. Previous studies have demonstrated abnormal activation of the Akt signaling pathway in both acute and chronic leukemia [25-27]. GSK-3β, a key regulator of the Wnt signaling pathway, promotes the phosphorylation of β-catenin by forming a complex with a series of proteins including adenomatous polyposis coli (APC), casein kinase 1 (CK1), and Axin [28-30]. GSK-3β is also involved in various signal transduction pathway, it acts downstream of the Akt signaling pathway and regulates the expression of c-Myc [31], an important member of the Myc gene family that is involved in the development of a variety of tumors.c-Myc expression is up-regulated in different human tumor cell lines, such as myelogenous leukemia cell lines, breast cancer cell lines, and certain lung cancer cell lines [32-35]. Previous studies have shown that lithium could suppress the expression of c-Myc protein in intervertebral disc cells[36], the findings of our study show that LiCl inhibited the expression of Akt1 in a dose-dependent manner and the expression of c-Myc, also it enhanced the level of p-GSK-3β(S9) in leukemia NB4 cells (Figure 4). High level of p-GSK-β(S9) led to increased expression of β-catenin (Figure 4). However, the Akt pathway is dominant in leukemia cell proliferation. These results indicate that LiCl promotes apoptosis in NB4 cells by inhibiting GSK-3β. In addition, LiCl affects the Akt pathway, thus, decreasing c-Myc expression. However, further studies are required to elucidate the molecular mechanism underlying the effects of LiCl on signal transduction pathway in leukemia cells.

The results of our study indicate that LiCl can inhibit GSK-3β in human leukemia NB4 cells. The G2/M phase arrest in NB4 cells treated with LiCl may be due to inhibition of the Akt signaling pathway. These results suggest that treatment with LiCl may be an effective strategy for APL therapy. Further investigations may be helpful to develop novel therapeutic approaches for leukemia.

31. Beaulieu JM. A role for Akt and glycogen synthase kinase-3 as integrators of dopamine and serotonin neurotransmission in mental health. J Psychiatry Neurosci. 2012;37:7-16