Notch as a Possible Cell Differentiation Factor in Pleomorphic Adenomas

In this study, we focused on Notch expression in PA since it has been hypothesized to be strongly associated with neoplastic cell differentiation. Moreover, studies on the expression of Notch have been tremendously increasing.

Tissue samples from Department of Oral Pathology, School of Dentistry, Aichi Gakuin University, diagnosed histologically as PA were further re-evaluated for the purpose of this research. A total of 30 cases of PA based on WHO classification were used in this experiment. The specimens used in this study were the same as those used by Okuda et al. (2), described in Table 1.

Specimens were fixed in neutral buffered formalin solution, subjected into series of alcohol for dehydration and then embedded in paraffin. Then after, the specimens were serially sectioned into 4 μm stained with hematoxylin and eosin and examined under a light microscope.

Immunofluorescent staining was also performed using Notch1 rabbit polyclonal antibody, CK7 mouse monoclonal antibody (1:100; Abcam) and CK13 mouse monoclonal antibody (AE8; 1:100; Abcam). Double staining was done by combining Notch1 and CK7 as well as Notch1 and CK13. After deparaffinization, Notch1-CK7 and Notch1-CK13 were pre-treated in citric acid buffer (Mitsubishi Chemical Medience, Tokyo, Japan) with a pH of 6.0 and placed in microwave for 1 min. Then after, sections were covered with serum-free protein block (Dako), incubated at room temperature for 30 min. The primary antibodies Notch1 and CK7 (1:100; Can Get Signal, Toyobo Co.,, Osaka, Japan) were allowed to react at 4 oC for 16 hours. For the secondary antibody, Donkey anti-rabbit IgG H&L (1:200; Alexa Fluor 594; Abcam) and Donkey anti-mouse IgG H&L (1:200; Alexa Fluor 488; Abcam) were carried out after reaction with Can Get Signal (Toyobo) at 1:200 at room temperature for 60 min. DAPI was allowed to react for 3 min for nuclear staining. The present study was approved by the ethics committee of Aichi Gakuin University, School of Dentistry under the title “Diagnosis and Clinicopathological Study on the Elucidation of Salivary Gland Tumors' (No. 284, December 5, 2011).

Generally, the tumor consists of various tissue types with small and/or large duct-like/cystic spaces in the tissues. The tumor is round in shape and covered with relatively thin fibrous connective tissue. The substantial portion of the tumor consists of glandular structures of tumor nests surrounded by fibrous tissue. The tumor is clearly separated from the normal salivary gland tissues. The tumor stroma consists of duct-like structures predominantly ductal and myoepithelial cells forming cystic cavities.

Ductal epithelial cells expressed CK7 (Fig. 2-a). Notch was also detected in the nucleus of some ductal epithelial cells (Fig. 2-b). Double immunofluorescent staining revealed that Notch and CK7 were co-expressed by tumor cells in ductal structures. Notch expression was observed in most of the nucleus of tumor cells in solid nests as well as those in ductal structures (Fig. 2-c, d).

The expression of CK13 in tumor cells undergoing squamous metaplasia was also observed. CK13 showed positive reaction on basal and prickle cell layers (Fig. 3-a). On the other hand, Notch was observed in the nucleus from basal cell to squamous cells (Fig. 3-b). Double immunofluorescent staining of Notch and CK13 revealed that most basal cells expressed Notch although expression decreased towards the squamous cells. Furthermore, nuclear expression was observed in basal cells and the expression became weak on the prickle cell layer (Fig. 3-c, d). 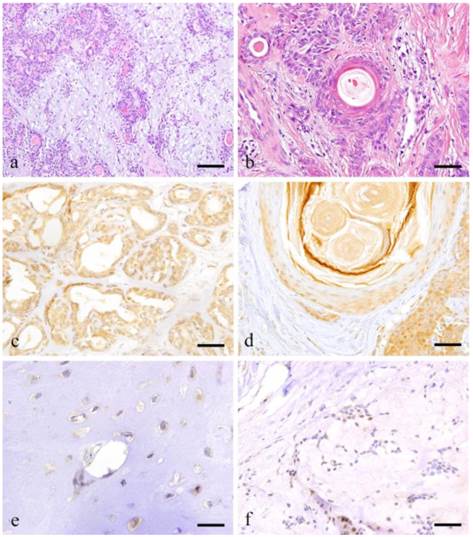 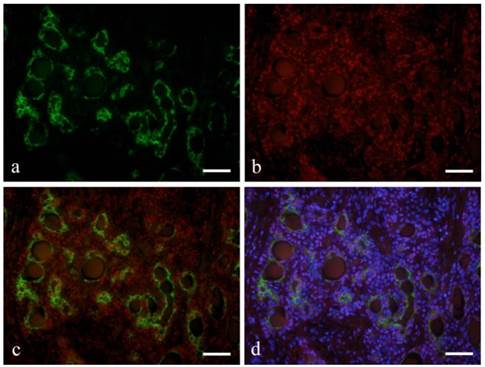 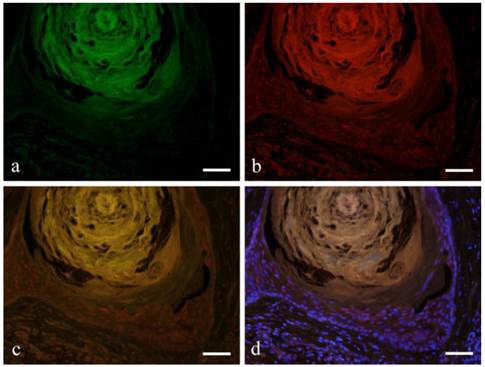 PA is the most common benign epithelial tumor of salivary glands based on WHO classification (1). The tumor shows a wide variety of tumor development brought about by cell proliferation and differentiation as mentioned in previous studies (4-6).

Okuda et al. studied the expression of Wnt in 30 cases of PA. The results showed that tumor cells in ductal structure and in solid tumor nests expressed Wnt. It was inferred that β-catenin pathway was involved in cell differentiation indicated by Wnt expressions in cells undergoing squamous metaplasia (2). For this reason, we believed that Notch would have a role in tumor cell differentiation considering its association with other tumors (7, 8).

Notch appears as a typical signal that controls the growth of tissues responsible for the fate of cells (9). Notch is a single-pass transmembrane receptor with a domain outside and inside the cell membrane. Notch intracellular domain (NICD) is cleaved and binds to a ligand such as Jagged. Cleaved NICD is moved from the cell membrane into the cytoplasm, binds with Suppressor of Hair-less (Su(H)) to form a complex and acts on downstream target gene in the nucleus thus activating the expression (10). In addition to the role of transmitting instructions for various morphogenesis and tissue differentiation during development, Notch plays an important role in cell-cell signaling and is involved in stem cell maintenance, differentiation and neuronal function in adult.

When there is a disturbance in the activity of Notch signaling pathway, it becomes oncogenic detected in several cancers such as esophageal cancer, breast cancer and lymphoblastic acute leukemia (T-ALL) (11, 12). In addition, Notch has been the focus of researches on the metastasis of malignant tumors such as adenoid cystic carcinoma and malignant ameloblastoma (13, 14), believed to be a huge factor in the progress of malignant tumors.

Studies in Notch have been done in odontogenic tumors such as ameloblastoma (15-17). Notch is expressed in solid nests and in squamous metaplasia in ameloblastoma, implicating its contribution in cell differentiation and morphogenesis. Moreover, in calcifying cystic odontogenic tumor, calcifying epitheioma (pilomatrixoma), odontoma and craniopharyngioma, Notch expression in ghost or shadow cells was observed (18-20). Notch overexpression in ghost cells inhibited the development of neighboring cells. This means that Notch inhibits the production of a ligand in receiving cell signal between Notch ligand and Notch receptor to adjacent cells through a negative feedback mechanism. In contrast, during binary cell fate determination, Numb acts an inhibitor of Notch signaling cycle causing asymmetric distribution of the Notch pathway. This led to overexpression suggesting that Notch-Jagged1 is the primary mechanism in determining the fate of ghost cell (21).

Squamous metaplasia depicted as having a variety of cell differentiation is commonly observed in odontogenic tumors such as ameloblastoma. Squamous metaplasia can also be observed in PA. Muraki et al suggested a close relationship between Notch and ameloblastoma shown by the localization of Notch in peripheral tumor nests (15). From this aspect, we suspected that Notch might also be involved in cell differentiation in PA.

Notch involvement is suspected in cell differentiation in areas showing ductal structures and squamous metaplasia. In the study by Okuda et al, small cuboidal cells forming ductal structure expressed Wnt and the expression was also confirmed in the basal cells surrounding those cells undergoing squamous metaplasia. The results coincided with our present study implicating the function of Notch in the same sites causing cell differentiation (2).