Methods: Laryngoscopy with a curved blade was performed on 200 anesthetized adults (100 males, 100 females) presenting for routine elective surgery. Glottic visualization was assessed by using the percentage of glottic opening (POGO) score in both simple extension and sniffing positions without the aid of the assistant or external laryngeal manipulation. Each gender group was divided into a younger group (< 50 years) and an older group (≥ 50 years). POGO scores were compared between both positions within each group.

Results: Mean (SD) POGO scores increased significantly only in younger male patients from 43% (39%) in the head extension position to 76% (30%) in the sniffing position.

Conclusion: The sniffing position seems to be advantageous for getting a better laryngeal view during laryngoscopy for tracheal intubation in adult male patients less than 50 years old.

A good laryngeal view is preferable for a successful tracheal intubation. The sniffing position has been thought to be the standard position for direct laryngoscopic view. However, Adnet et al. [1] showed no significant advantage of the sniffing position over simple head extension on routine general surgical patients, using the Cormack-Lehane scale. They found the sniffing position to be superior only in patients who were obese and in those with limited head extension. On the other hand, Levitan et al. [2] demonstrated significantly improved scores for percentage of glottic opening (POGO) on 7 fresh cadavers by using the head-elevated position. However, evaluation of the laryngeal view can be influenced by the grading method being used. The POGO scoring system provides objective, numerical, and continuous data compared with the traditional Cormack scale [3]. There have been no studies done on the effect of the sniffing position during laryngoscopy on patients according to gender or age, using POGO scores.

We hypothesized that age and gender could influence the relationship of the oral, pharyngeal, and laryngeal axes and that these differences would make the effect that the sniffing position has on the laryngeal view during tracheal intubation uneven between young and old or men and women.

The purpose of this study was to evaluate the effects of age and gender on the advantage of the sniffing position compared with simple head extension for laryngeal view during direct laryngoscopy, using POGO score.

The study was approved by the Institutional Review Board of the Kyung Hee University Hospital (ref: KHNMC IRB 2012-074) and registered with Clinical Trials (ref: NCT01688661). Written and informed consent was obtained from each patient. Two hundred adults (100 males, 100 females, American Society of Anesthesiologists Class 1 or 2) presenting for routine elective surgery under general anesthesia were studied from August 2012 to March 2013. Patients with anatomical defects of the face, neck, or upper airway were excluded from the study. 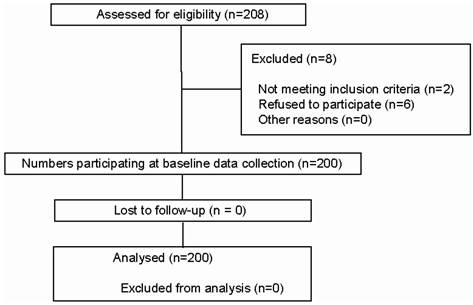 The following properties were evaluated and recorded: (1) mouth opening, as the interincisor gap with the mouth fully opened, (2) thyromental distance along a straight line from the thyroid notch to the lower border of the mandibular mentum with the head in full extension, and (3) modified Mallampati classification.

Patients were placed on the operating table with the head in the simple extension position. Routine monitors were used. Induction of anesthesia was achieved with 1.5 mg kg-1 propofol IV. Muscle relaxation was obtained with 0.6 mg kg-1 rocuronium IV. Anesthesia was maintained with sevoflurane (2-3%). After loss of all four twitches on the train-of-four obtained by ulnar nerve stimulation, laryngoscopy was performed using a Macintosh blade size 3. Each study subject was laryngoscoped twice - once in the simple extension position and then in the sniffing position, successively. All three anesthesiologists participating in the study had at least 3 years of experience in clinical anesthesia and had performed at least 1000 tracheal intubations in patients. The table height was set to the lowest setting because the heights of all three anesthesiologists were similar, between 172 ~ 176 cm, and the stances used by the anesthetists were as comfortable and casual as feet shoulder-width apart, knees slightly bent. Glottic visualization was assessed by using the POGO score, without any aid of assistant or external laryngeal manipulation in both the simple extension and sniffing positions. The sniffing position was achieved by insertion of a rigid box (7 cm in height) under the head. We used a 7-cm high rigid pillow to avoid the variable degree of cervical flexion caused by the compressibility of a soft head support [4]. The POGO score describes how much of the glottic opening is visible; a 100% POGO score includes visualization of the entire glottic opening from the anterior commissure of the vocal cords to the interarytenoid notch. A POGO score of 0% corresponds with no visualization of glottis, whether the epiglottis is seen or not [3].

Assuming a clinically significant difference in POGO score of 25% [5], we calculated the appropriate sample size to be 18 patients with use of α = 0.05 and β = 0.9. We recruited 100 patients of each gender for the study. Secondarily, each gender group was divided into a younger group (< 50 years) and an older group (≥ 50 years), and patients were recruited until each subgroup reached 50 patients, for general consistency, based on the central limit theory despite the necessary sample size being calculated as 18. POGO scores were compared between both positions within each group. The percentage of cases showing improvement or decline (significant change: more than 25% POGO) in the sniffing position compared to the simple head extension position was also noted in each group.

Independent t-test or Fisher's exact test was used for statistical analysis comparing the characteristics between the gender groups or the age groups. POGO scores of each patient in both positions were analyzed by paired Student's t-test using SPSS statistical software (version 15.0). Chi square analysis was used to determine improved or diminished cases between the gender groups and age groups. P < 0.05 was considered statistically significant.

Of the 208 patients assessed, 200 were enrolled in the study and progressed throughout the study (Figure 1).

*Significantly different (p<0.05) between the positions. Data shown are mean ± SD (range), number of patients who had a POGO score of 0%.

The number of patients showing improvement or decline (significant change of more than 25% in POGO score) in the sniffing position compared to the simple head extension position.

The theoretical background of the sniffing position is associated with the alignment of the oral, pharyngeal, and laryngeal axes. The mutual relationship of head and neck in the supine position can vary depending on the difference of physical status, weight, height, cervical curvature, the length of neck, head size, and so on. This craniocervical posture can affect the alignment of the three axes and then influence the effect of the sniffing position on glottic visualization.

There are two groups of obstacles between the eyes of the laryngoscopist and the vocal cords. The first is the upper teeth, maxilla, and other anatomical features located posterior to the oral airway space. The second is the tongue, epiglottis, mandible, and other anatomical features located anterior to the airway. The sniffing position is obtained by two consecutive movements, anterior flexion of the lower cervical spine (neck flexion) and extension of the atlanto-occipital joint (head extension). Each movement has its own role in displacement of the obstacles for better visualization of the vocal cords by the laryngoscopist. Neck flexion produces an upward movement of both groups of obstacles and head extension moves the posterior obstacles downward [6].

Differences in POGO scores of 25% are associated with an increased number of laryngoscopies required to perform successful tracheal intubation [13]. In 50% of younger male patients, the POGO scores improved significantly, exclusive of the rest of the study participants. It may be impossible or probably unnecessary to predict which position would be beneficial for each individual since determining whether the sniffing or simple extension position is advantageous to getting a better laryngeal view during direct laryngoscopy depends on the physical condition of the patient. If the glottic visualization is not good in one position, the other position can be tried subsequently. However, we can recommend that the sniffing position should be the first choice in adult male patients, especially those of younger age.

This study has several limitations. We could not technically blind the laryngoscopist to the position of the patient. The laryngoscopist tried to get the maximal laryngeal view in each position to reduce the potential bias of a non-blind study design. POGO scoring depends only on the amount of glottic opening. A zero score for POGO means a difficult laryngoscopy, including the Cormack grades III and IV. It can be considered as a weakness of POGO scoring that it does not have any score below zero. However, we chose POGO scoring over Cormack and Lehane grades due to its high validation and reliability. The intraobserver correlation coefficient of POGO scoring is 0.85, while the interobserver correlation is 0.74. The intrarater reliability of POGO scoring seems to be as good as or better than that of Cormack and Lehane grades. Moreover, the POGO score can detect a subtle change of laryngeal view between various intubation techniques and then provide better outcomes for comparing the techniques [3].

In conclusion, the sniffing position seems to be advantageous to getting a better laryngeal view during laryngoscopy for tracheal intubation, especially in adult male patients younger than 50 years old.

5. Lee BJ, Kang JM, Kim DO. Laryngeal exposure during laryngoscopy is better in the 25 degrees back-up position than in the supine position. Br J Anaesth. 2007;99:581-6

6. Isono S. Common practice and concepts in anesthesia: time for reassessment: is the sniffing position a "gold standard" for laryngoscopy?. Anesthesiology. 2001;95:825-7