Detection of Platelet-Monocyte Aggregates by the ADAM® Image Cytometer

Background: Inappropriate platelet activation is known to be associated with various thrombotic disorders. Platelet-monocyte aggregates (PMAs), whose formation is mediated by platelet surface P-selectin (CD62P), can be used as a reliable marker to detect platelet activation. Previous studies have generally detected PMAs through flow cytometry-based approaches. Recently, the ADAM® image cytometer (Nanoentek Inc., Seoul, Korea) was developed for image-based cellular analysis. In this study, we detected PMAs with the ADAM® cytometer, evaluated the reproducibility of the measurements made by the ADAM® cytometer, and compared the abilities of the ADAM® cytometer and a flow cytometric assay to detect PMAs.

Methods: Whole blood samples were collected from patients. Within 5 minutes of collection, anticoagulated whole blood samples were fixed in 10% paraformaldehyde and 5% glyoxal. Nineteen clinical specimens were collected; each was analyzed three times with the ADAM® cytometer in order to assess the reproducibility of its measurements. To compare the ability of the ADAM® cytometer with that of a flow cytometer to detect PMAs, each cytometer was used for 23 clinical samples and the correlation of the measurements was determined.

Conclusions: The ADAM® cytometer is a suitable alternative method to the flow cytometry-based assays. Since the ADAM cytometer does not need specialized instrument knowledge or software proficiency (unlike flow cytometry), the ADAM® cytometer can be used as a rapid and reliable POCT device to measure platelet activation in peripheral blood. This, in turn, will provide valuable information regarding patient propensities to thrombotic diseases.

Platelet surface P-selectin (CD62P) is a membrane-associated protein that is commonly used as a marker for in vivo platelet activation in flow cytometric assays (4). However, several studies have demonstrated a loss of platelet surface CD62P expression soon after an activating event, which is followed by a concomitant increase in the level of soluble (s) plasma P-selectin (4,6,7). Thus, flow cytometric analysis of CD62P is an unsuitable measurement for platelet activation in clinical settings, in which a chronic stimulus is generally present (4).

For these reasons, the development of a rapid, accurate, and affordable method to detect and quantify platelet activation is necessary. Several studies have revealed that platelet-monocyte aggregates (PMAs), whose formation is mediated by platelet surface P-selectin (CD62P), could be an alternative, sensitive, and reliable marker for platelet activation (8-10). Previous studies have detected platelet-monocyte aggregates by flow cytometric assays (4).

The aims of this study were: 1) to evaluate the reproducibility of PMA measurements made by the ADAM® cytometer, and 2) to determine the extent to which the ADAM® measurements correlate with flow cytometry measurements.

This study was approved by the Institutional Review Board of Korea University Hospital in May 2010. Whole blood specimens were collected from patients who were receiving treatment at Korea University Ansan Hospital from June 2010 to August 2010. All blood samples were obtained between 6:00 a.m. and 9:00 a.m. Venipuncture of a forearm vein was performed with minimal stasis to avoid artificial aggregate forming. A syringe with a 22-gauge needle was used for collection.

Pretreatment protocol used in this study for the flow cytometric assay

The gating strategy to identify platelet-monocyte aggregates (PMAs) is shown in Figure 1. Flow cytometric analysis of negative controls is shown in Figure 1(A), 1(B), and 1(C), whereas flow cytometric analysis of a patient sample (the first to be analyzed) is shown in Figure 1(D), 1(E), and 1(F). The numbers labeling the gates represent the percentages of events inside each gate. The target cell populations gated in the SSC and CD45-PC5 plot were transferred into the CD14-PE and CD45-PC5 plot. In this plot, monocytes, granulocytes, and lymphocytes were differentiated from one another according to the expression levels of CD14 (a monocyte marker) and CD45 (a ubiquitous marker of white blood cells). Among these cells, monocytes were identified as CD14high and CD45high cells. Then, CD14high and CD45high cells (gate B) were plotted on a CD14 vs. CD41 graph [Figure 1(C) and 1(F)], whereas the CD14high and the CD41high subpopulation was considered to represent PMAs, as shown in a previous study (11). The patient sample shown in Figure 1(F) exhibited 45.8% PMAs.

The ADAM® image cytometer (Nanoentek) is equipped with green and blue light emitting diodes (LEDs) for fluorescence excitation, a charge-coupled device (CCD) camera for collecting emitted light, and an autofocus feature. An important innovation implemented in the ADAM® image cytometer is the automated movement of the chip, which is controlled by the instrument stage (11). The disposable chips are available in various channel depths to enable the measurement of bacteria, yeast, sperm cells, blood cells, and somatic cells. The analysis software provides information regarding cell size and intensity for concentrations up to 104-106 cells/ml (11). Overall, 80 images were captured in order to reduce sample-to-sample variation (7).

The pretreatment protocol for blood specimens is shown in Table 2. The processing time to prepare samples for measurement with the ADAM® image cytometer was approximately 1 hour and 20 minutes. Fluorescent reagents such as CD45-PC5, CD14-PE, and CD41-FITC (Becton Dickinson, NJ, USA) were used to enhance the detection of platelets and monocytes. For lysing RBCs, the ImmunoPrep Reagent System (Beckman Coulter, Brea, CA, USA) was used, since this system requires only 30 seconds to lyse RBCs. In contrast, the Versalyse system (Immunotech, Marseille, France) requires 20 minutes to lyse RBCs; thus, PE fluorescence can decrease over time. Monocytes were enriched by centrifugation. A total processed specimen volume of approximately 20 μl was injected into the ADAM® chip.

The recognition software algorithm was optimized to eliminate imaging errors such as fluorescent antibody aggregates, stained debris, and double images. Without this optimization, the software program recognizes each particle that is stained with CD14-PE or is attached to red fluorescence protein (RFP), including fluorescent antibody aggregates and stained debris. To solve these technical difficulties with the imaging, the algorithm was modified such that cells are first recognized in the bright-field image screen. Then, this image is merged with an RFP screen. Particles are recognized as monocytes only when a particle is detected both in the bright-field image screen and in the RFP screen (Fig. 2). With this improvement in the program algorithm, erroneous images could be significantly reduced and accounted for less than 5% of the total monocytes. 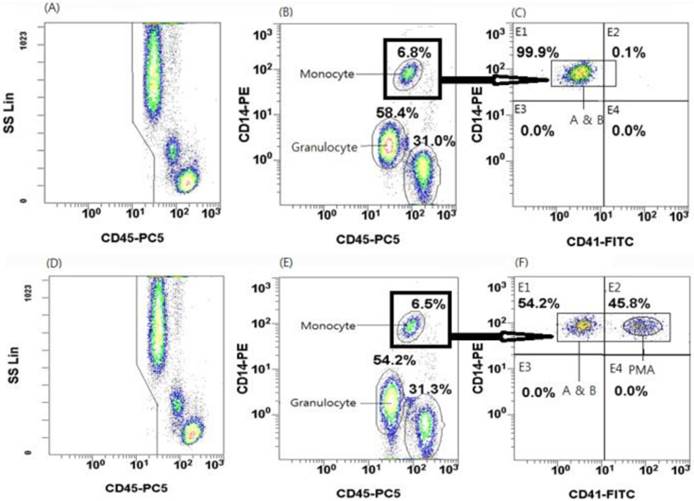 During the time required to process the specimens, the number of PMAs could potentially increase. To minimize these spurious increases and more accurately determine the platelet activation status, an appropriate fixation method is needed. In a preliminary study, we compared three different modifications from the fixation method used in the flow cytometric assay (12) to determine the optimal fixative condition. The three fixatives tested were: (1) 12.5% paraformaldehyde, (2) 25% paraformaldehyde, and (3) 10% paraformaldehyde with 5% glyoxal. The most stable level of platelet-monocyte aggregates was achieved with 10% paraformaldehyde and 5% glyoxal, which stabilized the level of platelet-monocyte aggregates for 2 hours (data not shown). Cells were fixed in this combination of reagents immediately after the blood draw (see the pretreatment protocol in Table 2).

Pretreatment protocol used in this study for the ADAM® image cytometer

To evaluate the reproducibility of the measurements made by the ADAM® image cytometer in whole blood specimens, the % of PMAs was determined three times using the ADAM® image cytometer for each specimen. The coefficient of variation (CV) was also assessed. To compare the ADAM® measurements with those obtained by flow cytometry, the Pearson's correlation coefficient was determined using a scatter diagram. All analyses were performed using Excel (Microsoft Corporation, Redmond, WA, USA).

Comparison of the ADAM® Image Cytometer with a Flow Cytometric Assay

Twenty-three blood samples were evaluated. The measurements made by the ADAM® image cytometer correlated well with those made using the flow cytometric assay to detect PMAs (R = 0.944) (Fig. 3). 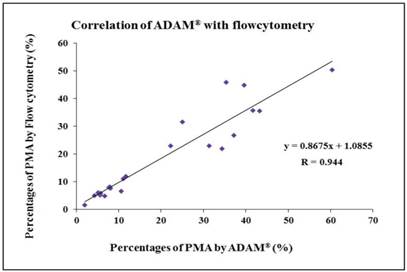 Platelet-leukocyte aggregates are a well-known marker of platelet activation. Many studies have demonstrated that the aggregating interaction between platelets and leukocytes is a causative mechanism in thrombogenesis (13). Moreover, patients with acute myocardial infarction have been shown to have higher levels of PMAs compared with normal controls (9,14,15). In addition, the amount of platelet-leukocyte aggregates has been reported to increase significantly in acute stroke patients, especially those who had previous infections (16). Activated platelets bind to polymorphonuclear leukocytes or monocytes through the interaction of P-selectin, which is expressed by platelets, and P-selectin glycoprotein ligand 1 (PSGP-1), which is expressed by white blood cells (9,13,16). However, the increase in circulating neutrophil-platelet aggregates has been shown to be significantly less than the increase in PMAs; moreover, the neutrophil-platelet aggregate counts return to baseline earlier than the PMA counts (4,9). Therefore, PMAs are the most appropriate aggregates to measure for determining platelet activation status (4).

Introduced in the early 1990s, the image cytometer has been used to analyze cells by capturing images and analyzing them with specific software. In particular, the ADAM® image cytometer, which uses fluorescent dyes, has opened the field to various applications such as lymphocyte counting and estimation of cell viability (11). In this study, we evaluated the reproducibility of the measurements made by the ADAM® image cytometer (Nanoentek, Inc., Seoul, South Korea). We also determined the extent to which the measurements of PMAs made with the ADAM cytometer correlated with those made using the flow cytometric assay. Importantly, we performed optimization of fixative conditions in order to achieve a stable level of PMAs throughout the specimen analysis protocol.

The processing time required to use the ADAM® cytometer is not significantly different from that of the flow cytometric assay (Table 1). Flow cytometry is generally performed on multiple samples to obtain information on a large population of cells, and is undertaken in a high-throughput mode. However, flow cytometry requires experts who are proficient in instrument and software management, which can increase the time required to obtain results. In contrast, the ADAM® image cytometer provides a simpler interface, is easy to handle because of its tabletop size, and yields rapid results. In addition, the ADAM® cytometer can provide more morphological information and can be used even for small-sample analysis. Moreover, the ADAM® image cytometer is less expensive (US $12,000-15,000) than a flow cytometer, and is thus suited to use in peripheral laboratories. The ADAM® image cytometer could be used in clinical settings as a POCT method for screening various thrombotic diseases, as well as for developing antiplatelet medications in clinical research.

In conclusion, this study evaluated the ability of the ADAM® image cytometer to determine the percentage of PMAs, which is indicative of platelet activation status. This study found that the measurements made by the ADAM® cytometer had adequate reproducibility and correlated well with those made by the flow cytometric assay. Thus, the ADAM® image cytometer can potentially be used as a reliable and rapid POCT device for detecting PMAs in various clinical applications, and also promises to have a positive impact on various clinical outcomes associated with thrombotic diseases.

This research was supported by Basic Science Research Program through the National Research Foundation of Korea (NRF) funded by the Ministry of Science, ICT & Future Planning (No. 2008-0061891).

The author (Daesung Hur) of this article serves on the QA division of Nanoentek, which is developing products related to the research being reported. The terms of this arrangement have been reviewed and approved by Korea University Ansan Hospital in accordance with its policy on objectivity in research.

3. Chen YC, Wu KK. A comparison of methods for the study of platelet hyperfunction in thromboembolic disorders. Br J Haematol. 1980;46:263-268