Cancer remains the most-feared disease of people from all walks of life. Despite intensive research efforts on studying this complex disease since the end of 19th century (1), the roles of genetic and epigenetic mechanisms involved in the tumorigenesis process are still not completely understood. However, cancer research took a new turn in 2006 when Yamanaka and colleagues discovered a novel experimental approach in direct reprogramming of somatic cells to their pluripotent state (2). The generated induced pluripotent stem cells (iPSC) hold great potentials as they are embryonic-like and are able to differentiate into all three primary lineages, and could, therefore, be custom-made to treat an individual patient in regenerative therapy (3-5).

With the introduction of this novel dedifferentiation technique, cancer cells could be reprogrammed to produce pluripotent stem cells with cancer properties. The reprogrammed cancer cells could be studied as a personalised model of the cancer from which the cells were derived, subjected to experimental manipulation in the laboratory, and utilised for testing of potential therapeutic drugs to overcome drug resistance in cancers in a personalised setting (6). In addition, it is interesting to note that cancer cells are found to be more responsive to reprogramming than normal somatic cells, suggesting differences in reprogramming potential in cancer and normal cells (7,8). Most of this cancer cell reprogramming studies determined the reprogramming efficiency at the initial stage of formation of ESC-like cells. However, the association between reprogramming efficiency and the product's capability for long term culture has not been studied. Studying the long term culture effect on the reprogrammed cells is essential as there have been publications on prolonged passage could alter cells biological properties as well as accelerating the senescence process (9-11).

Osteosarcoma is a diverse and heterogeneous bone cancer occurring mainly in children and adolescent and is highly variable histologically (12,13). The aim of the present study was to reprogramme osteosarcoma cells into pluripotency by the four transcription factors, OCT4, SOX2, KLF4 and c-MYC, and investigate whether heterogeneity of osteosarcoma causes variable reprogramming responsiveness and the long term culture of reprogrammed osteosarcomas.

Retroviral and iPC generation. Human iPC cells were produced as previously described, with slight modification (14). Retroviral vectors for each of the transcription factors genes (pMX-c-MYC, pMX-KLF4, pMX-OCT4, or pMX-SOX2) were transfected with envelope genes (gag/pol and VSV-G) into 293FT cells using Lipofectamine 2000 (Invitrogen, Carlsbad, CA, USA). 3 days after transfection, the supernatant containing viruses was harvested and filtered through a 0.45-μm filter. OS cells were seeded at a density of 40-60% confluency one day before transduction. Fresh retrovirus supernatants were supplemented with 8 mg/ml Polybrene (Millipore, Merck) prior to transduction. Equal amounts of supernatants containing each of the four retroviruses carrying the OCT4, SOX2, c-MYC and KLF4 genes, were mixed and transferred to the cells. The plates were centrifuged at 800g for 50 min and incubated overnight at 37 ˚C, 5% CO2. Fresh medium was changed on the next day and subsequently every day. Transduced cells were transferred to iMEF on day 3 post transduction. Cells were monitored every day for the formation of colonies. Colonies were manually picked on day 15 - day 20 and transferred to new iMEF.

Embryoid body formation. Colonies were manually cut into small pieces and transferred to low-attachment dishes and cultured in ESC medium without FGF for 10 days. Morphology of the embryoid body was observed on day 10 using an inverted microscope.

Four osteosarcoma cell lines, Saos-2, MG-63, G-292 and U-2 OS, were reprogrammed with single retroviral transduction of the transcription factors OCT4, SOX2, KLF4 and c-MYC using the experimental schedule depicted in Fig. 1A. ESC-like clusters started to appear between 15 to 20 days post-transduction (Fig. 1B) for all four cell lines. U-2 OS showed the highest reprogramming efficiency with the most ESC-like clusters, followed by MG-63, Saos-2 and G-292 (Fig. 1C). Morphology of the colonies resembled ESC colonies with defined border and cells were tightly packed with each other (Fig. 1D). Colonies were subsequently passaged onto fresh feeder cells for further expansion. Saos-2-REP and G-292-REP could maintained their morphology in culture for more than 30 passages without losing the ESC-like defined borders, whereas MG-63-REP and U-2 OS-REP colonies did not show distinct borders indicating the colonies were losing the ESC-like morphology (Fig. 1E).

On further characterisation, all the reprogrammed osteosarcoma cells expressed alkaline phosphatase and the pluripotency markers, OCT4, SSEA4, TRA-1-60 and TRA-1-81, as in embryonic stem cells (Fig. 2). Expression of the pluripotency markers was still maintained at passage 15 albeit at a lower staining intensity (Fig. 2B e-h). Embryoid body formation is one of the hallmark characteristics of ESC. All four reprogrammed ostesarcomas formed embryoid body-like spheres for up to 10 days when cultured in suspension condition in a low attachment dish (Fig. 3A). To further test the differentiation capacity of the reprogrammed osteosarcomas, directed differentiation into adipocytes and osteocytes was performed. The results showed that all four reprogrammed osteosarcoma differentiated into adipocytes as shown with Oil Red O staining (Fig. 3B i-iv). However, only Saos-2-REP, MG-63-REP and G-292-REP differentiated into osteocytes as showed by Alizarin Red S staining (Fig. 3B v-viii).

When cancer cells are reprogrammed to pluripotency, they are known as induced pluripotent cancer (iPC) cells. iPC has been successfully achieved for a number of types of cancer (15-17). In this work, we showed for the first time that a single round of retroviral transduction of the four Yamanaka factors was enough to reprogramme four osteosarcoma cell lines into ESC-like colonies with expression of pluripotency markers. In contrast, Zhang et al. previously reported reprogramming of sarcoma cell lines, including Saos-2 and MG-63, with lentiviral transduction of six transcription factors (7). Based on the results from our study and Zhang et al., both retrovirus and lentivirus systems can generate iPC cells with ESC-like characteristics. However, it was unclear whether the genetic and epigenetic states of iPCs generated from these two systems and with different sets of reprogramming factors are the same, or there are subtle molecular and biological differences. Further assay such as the formation of teratoma will be included in the next phase of our study to confirm the pluripotency or ESC-like state of these reprogrammed osteosarcoma cells.

Cancer cells are good candidate for reprogramming as cancer cells express some of the transcription factors crucial for generating iPSC (18-22). Despite our success with osteosarcoma cell line, our attempt on the use a single-round retroviral transduction of the four transcription factors to reprogramme an osteoblast cell line, hFOB, were unsuccessful (data not shown). Osteoblasts are more terminally differentiated somatic cells and did not seem to respond well with our reprogramming protocol. Park et al. achieved reprogramming of ~0.1% fetal fibroblasts using the Yamanaka factors but was unable to reprogramme adult fibroblasts with the same cocktail. Only upon addition of hTERT and SV40 large T-antigen to the reprogramming cocktail were Park et al. able to achieve ~0.25% of adult fibroblasts being reprogrammed (23). Hence, to force adult fibroblasts to respond to the same reprogramming treatment, additional factors are required to grow and to transform the cells to be more adaptive to reprogramming. Reprogramming of osteoblasts and other more terminally differentiated cells may, thus, require additional steps to facilitate the dedifferentiation process. 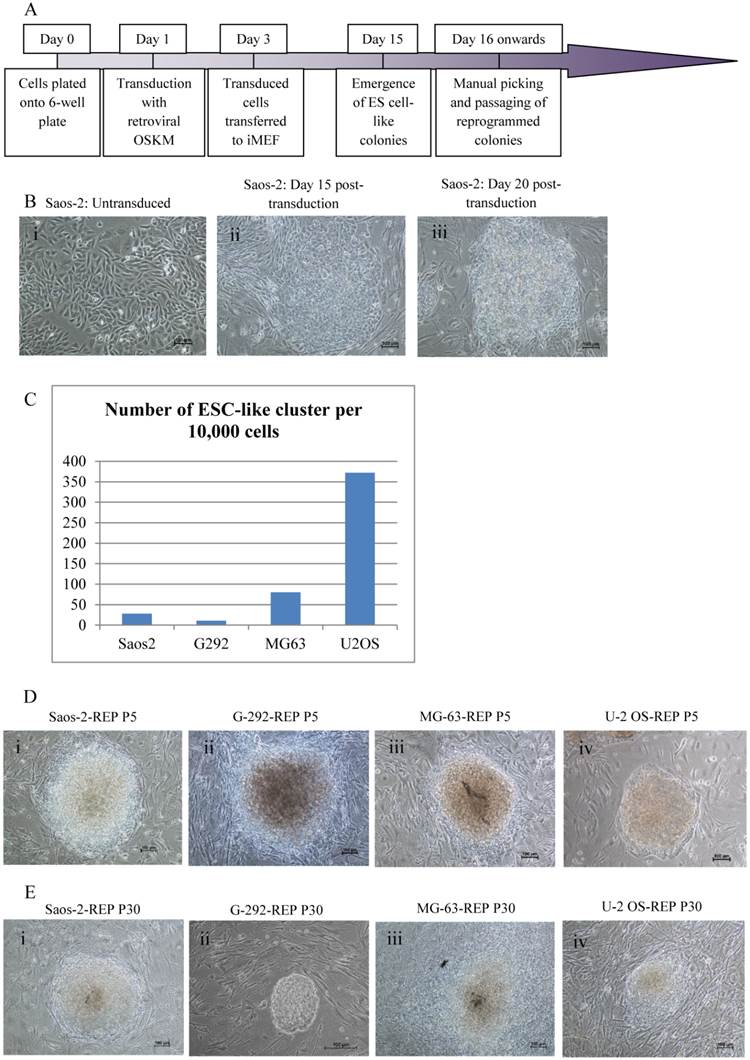 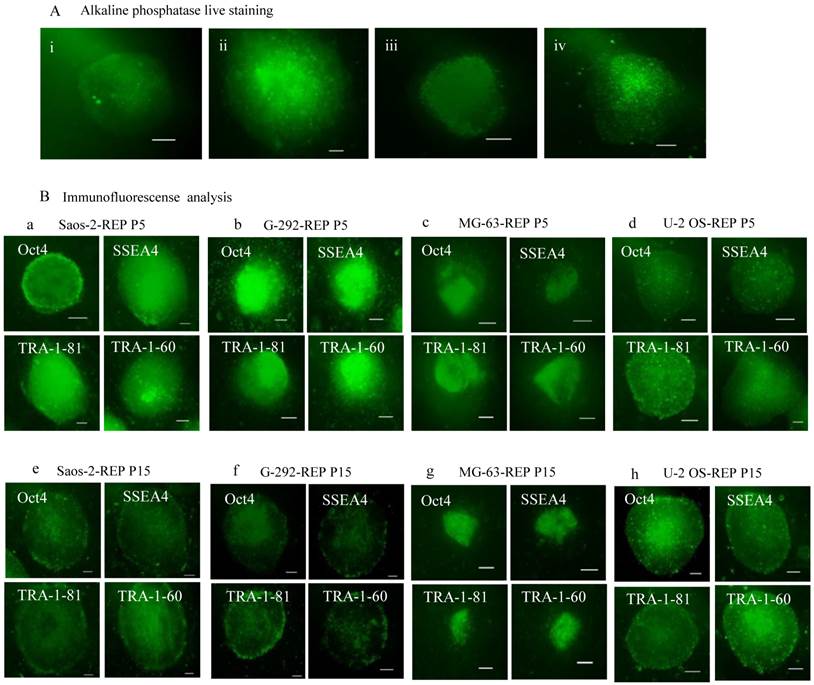 In a recent study of generation of iPC cells from gastrointestinal cancer cell lines, the researchers highlighted the importance to demonstrate universality in primary tumours and to elucidate factors that are involved in the exerting differences in responses, efficiencies and delivery systems (16). Our results showed different reprogramming efficiencies among the four cell lines used, indicating biological heterogeneity among the osteosarcoma cell lines and the effects of such heterogeneity in dedifferentiation potentials. Among the four tested cell lines, both U-2 OS and MG-63 responded well with transduction and presented the highest and second highest number of ESC-like clusters. However, the morphology of the U-2 OS-REP and MG-63-REP colonies could not be maintained for more than 30 passages, unlike G-292-REP and Saos-2-REP colonies. Our observation showed that transduction efficiency does not necessarily correlate with the success of reprogramming and maintenance of pluripotency. A previous study conducted on different osteosarcoma cell lines indeed demonstrated divergent reactions to p53 or Rb transgenes (24). Data of the said study also demonstrated variable transduction efficiencies of the osteosarcoma cell lines, with transduction of U-2 OS being most efficient compared to Saos-2 and MG-63.

As U-2 OS is the most responsive to transduction with highest number of ESC-like clusters, we further discussed on why U-2 OS behave in such a way. As in our work, U-2 OS could not maintain the effect of the transgenes. Therefore, factors intrinsic to each cell lines are probably responsible for variable transduction efficiencies and U-2 OS may have properties suppressive to the maintenance of pluripotent expression upon prolonged passage. 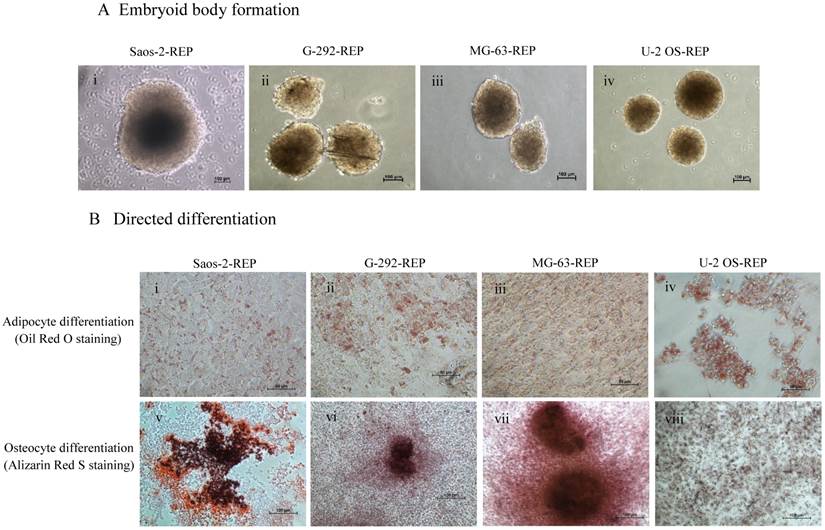 Another study by Benayahu et al. confirmed variable properties and characteristics in osteosarcoma cell lines. Osteosarcoma cell lines, U-2 OS, MG-63 and Saos-2, were studied for the expression of cell cycle regulatory proteins, surface markers and several extracellular matrix (ECM) proteins. Their data demonstrated that all three cell lines have variable degree of expression on the proteins and markers conducted in the study (26). These yet undefined varied characteristics may have great influence on the reprogramming efficiency of the parental cells and long-term culture of the derived iPC cells.

Besides intrinsic factors governing the reprogramming responsiveness of the cells, migration and invasion potentials of the cancer cells could play a role too. Fromigue et al. showed that Saos-2 had the best capacity in migration, while MG-63 had the least migration capacity, and U-2 OS was the most invasive (27). The invasiveness and the higher proliferation rate (28) of U-2 OS could have increased the transduction efficiency of the cells, but may also have decreased the long term effect of transgenes in the cells. Recent work by Xu et al. reported that hyperproliferation of somatic cells could be harmful for reprogramming (29).

We demonstrated here that osteosarcoma cell lines can be reprogrammed to induced pluripotent cancer cells with variable reprogramming efficiency. U-2 OS cells, with higher proliferation rate and more invasive character, respond better to retroviral transduction but could not maintain the ESC-like morphology in prolonged culture suggesting the inability to maintain the effects of the transgenes in the cells. This observation suggests that efficiency of transduction may not correlate with the sustainability of reprogramming.

This research is supported by HIR-MoE Grant (Reference number - UM.C/625/1/HIR/MOHE/CHAN/03, account number - A000003-50001). The experiments were mainly carried out in the research laboratories at the Sungai Long Campus of the Universiti Tunku Abdul Rahman (UTAR).