Background: Consumption of lycopene through tomato products has been suggested to reduce the risk of prostate cancer. Cellular adhesion and migration are important features of cancer progression and therefore a potential target for cancer interception. In the present study we have examined the in vitro effect of lycopene on these processes.

Results: 24 hour incubation of prostate cell lines with 1.15µmol/l lycopene showed a 40% reduction of cellular motility in case of PC3 cells, 58% in DU145 cells and no effect was observed for PNT2 cells. A dose related inhibition of cell adhesion to a basement membrane in the form of Matrigel™ was observed in all three cell lines and it reached statistical significance for PC3 and PNT2 cells at lycopene concentrations ≥1.15µmol/l. However, in case of DU145, only a concentration of 2.3µmol/l showed a significant reduction.

Conclusion: This in vitro investigation indicates that lycopene can influence the cell adhesion and migration properties of cancer cells at a dose which is arguably achievable in patients. The results of our study expand our understanding of a chemo preventive role of lycopene in prostate cancer.

Prostate cancer is the most common male cancer in the Western society. Although genetic predisposition is an important contributing factor, diet and lifestyle are suggested to play a significant role, especially in sporadic cancer [1]. The cancer preventive role of tomatoes was first highlighted by a large epidemiological study in 1995, suggesting them as a strong dietary predictor of reduced prostate cancer risk [2] and attributing their protective effect to lycopene. Several modes of action have been proposed for this effect (see review by Karin Wertz for further details) [3]. These include its ability to inhibit prostate cancer cell proliferation, alteration of cell cycle progression, inhibition of androgen activation and signalling, improved gap-junction communications, inhibition of IGF-1 and anti-angiogenic activity [4]. Adhesion to extracellular matrix (ECM) and motility of tumour cells within the ECM are important steps in the invasion progress of metastatic tumour cells.. Previous studies have shown an inhibitory effect of lycopene in SK Hep-1 hepatoma cells, however the concentrations used were much higher than can be achieved in vivo [5,6]. Lycopene's effect on the adhesion and migration properties of prostate cancer cells has not been reported before.

In the present study, physiologically relevant concentrations of lycopene were tested for their effects on the migratory and adhesion properties of prostate cancer cell lines.

PC3 (ECACC) and DU145 (ATCC) prostate cancer cell lines, both androgen independent and exhibiting metastatic properties in vivo, were investigated. The immortalised normal prostate epithelial cell line PNT2 (ECACC) was also used. An all-E >95% pure isomer of synthetic lycopene (DSM, Nutritionals) was tested. Crystalline lycopene was dissolved in tetrahydrofuran (THF) containing 0.025% butylated hydroxytoluene. The final solvent concentration was kept constant across all treatments (including controls) at a concentration of 0.1%, chosen as having a minimal effect on cell viability.

Cells were grown in T25 cell culture flasks to ~60% confluence, when lycopene was applied at 0, 0.58, 1.15 and 2.3 µmol/L in serum free medium. Flasks were incubated for 24 hour in 5% CO2 at 37°C. Following treatment, cells were washed 2x with PBS and detached using 3ml EDTA (0.02%). They were suspended in fresh culture medium at a concentration of 5x 104 cells/ml and 0.1ml seeded into MatrigelTM (BD Biosciences) coated wells of 96-well plates. After 1 hour incubation at 37°C, all wells were gently washed three times with PBS to remove unattached cells. The remaining adherent cells were left to settle for 18h in serum free medium, at which time they were exposed to WST-1 reagent (Roche, Applied Science) as per manufacturer's specification for spectrophotometric assessment of cell numbers. The adhesion assays were carried out in triplicate for each of the cell lines on three different days and the effects of lycopene dose are presented relative to untreated controls showing means of three independent experiments.

For the migration assay, ibidi™ culture inserts (Thistle Scientific Ltd, UK) were used. Briefly, the inserts consist of two chambers separated by a 0.5mm divider, each chamber with a growth area of 0.22cm2. The inserts were planted into 35mm tissue culture dishes using sterile tweezers. Cell suspensions were prepared at 7-9x105 cells/ml in medium, of which 70µl was transferred to each chamber. The cells were left to adhere and grow to ~90% confluence. They were then exposed to 0, 0.58, 1.15 and 2.30µmol/L lycopene within the chambers for 24h, at which time the cells were 100% confluent, as required for the migration assay. At this stage, cells were arrested by addition of 10µg/L mitomycin-C for 30 minutes to prevent further proliferation. In the case of the normal PNT2 cell line, cells treated with 10µg/l mitomycin-C had migrated at a much slower rate than the PC3 cells. This was partly due to a loss in viability resulting from the cell-cycle arrest induced by the mitomycin-C and the dose applied to PNT2 cells was subsequently reduced from 10µg/l to 2µg/l. However, since a concentration of 2µg/l did not appear to have a significant inhibitory effect on the proliferation of DU145 and PC3 prostate cancer cell lines, a mitomycin-C concentration of 10µg/l was used for these cell lines.

The dividing strip between the chambers was removed and images were acquired along the cell-free zone between time 0 and 24 hours. Cell migration was assessed using AngioSys V1.0 software (TCS Cellworks), measuring the area covered by the cells. The encroachment of the cell-free gap for each treatment was determined by comparing results to the 0h time point. Experiments for each cell line were performed in triplicate.

Pairwise comparisons were done using SPSS (PASW18) to test the difference between control and the lycopene treated cells and differences at a level of 0.05 deemed significant.

The Effect of Lycopene on Cell Adhesion

Figure 1 shows the cell adhesion data for PC3, DU145 and PNT2, obtained using the WST-1 assay. Experiments for each cell line were carried out in triplicate on three different days and data points presented are means of the three independent experiments (i.e. average of 9 measurements) ± SD.

Effect of Lycopene on prostate cell adhesion to MatrigelTM. PC3, PNT2 and DU145 cell-lines were pretreated with lycopene for 24h and then seeded into 96-well Plates precoated with MatrigelTM. The number of adhering cells was determined by WST Assay. The data points are presented as Means ± SD of three separate experiments. The asterisk (*) denotes significant difference from the untreated Control (P<0.05). Double asterisk (**) indicates that this data point is also significantly different from the other treatment concentrations. 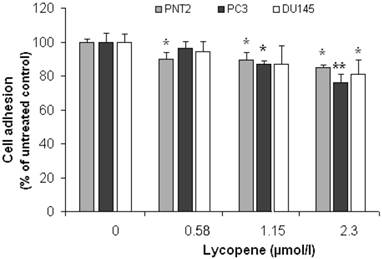 At 2.3µmol/l, lycopene significantly reduced the attachment of all prostate cell lines to Matrigel™ (Figure 1). A significant inhibition of adhesion was also observed in PC3 cells at a lycopene concentration ≥1.15µmol/l (P <0.05); however, it failed to reach statistical significance in the DU145 cell line. Lycopene also inhibited the adhesion of PNT2 cells, but the effect was the same at all lycopene concentrations and magnitude was lower.

The Effect of Lycopene in the Cell Migration Assay

There was a significant reduction in cellular migration of PC3 prostate cancer cells, both at 1.15 and 2.3µmol/l lycopene (Figure 2a). The degree of inhibition was similar at lycopene concentrations of 1.15 and 2.3µmol/l. Treatment of DU145 cells with lycopene resulted in a more pronounced inhibition of migration compared to PC3 cells (Figure 2b). In contrast, compared to the cancer cell lines, PNT2 cells migrated faster as shown by the merging of cell sheets within 24h even in the presence of 1.15 µmol/L lycopene (Figure 2c and d). However, at a higher concentration there was some inhibition of migration in the presence of lycopene though magnitude was lower than the cancer cell lines. 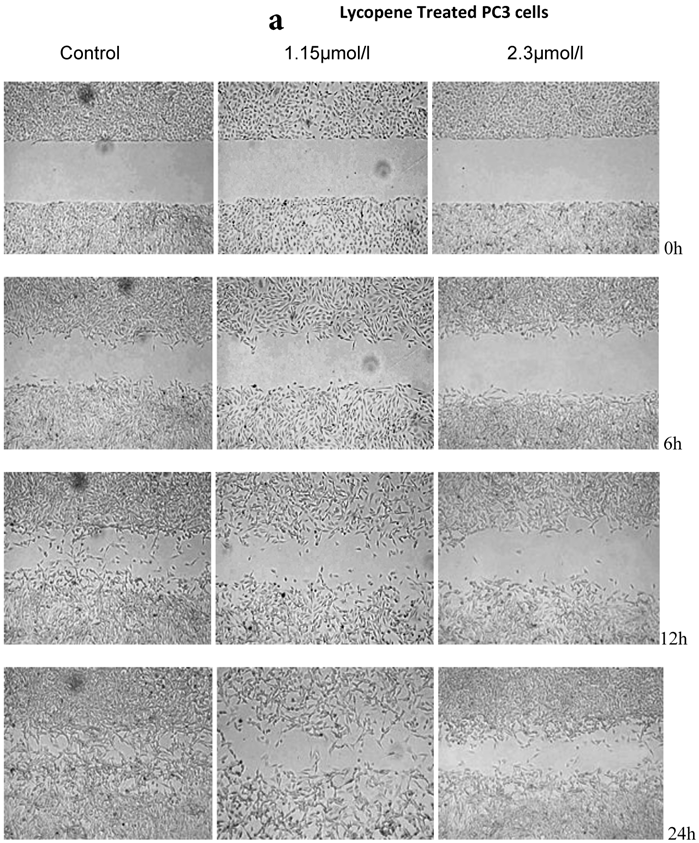 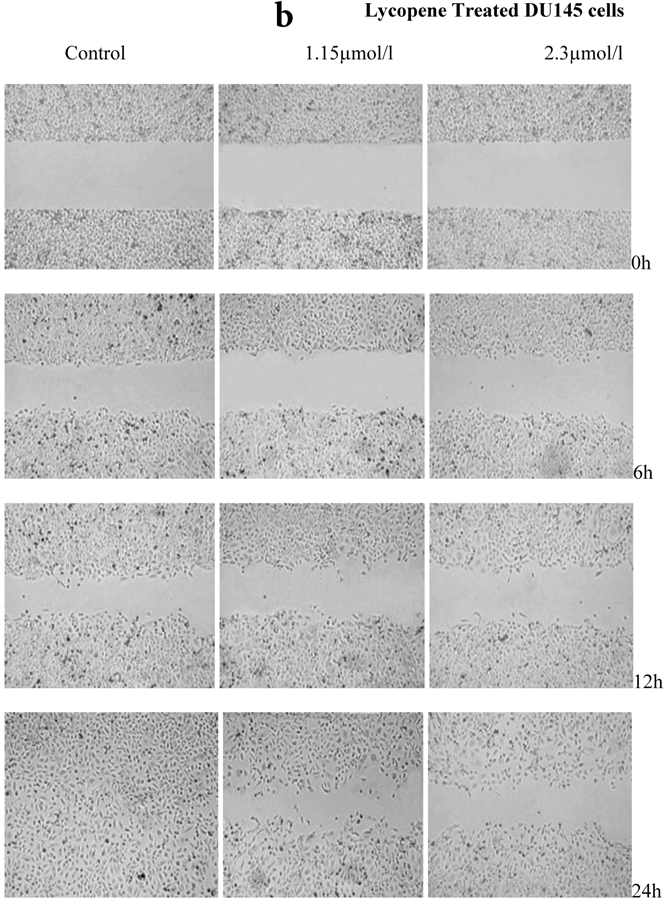 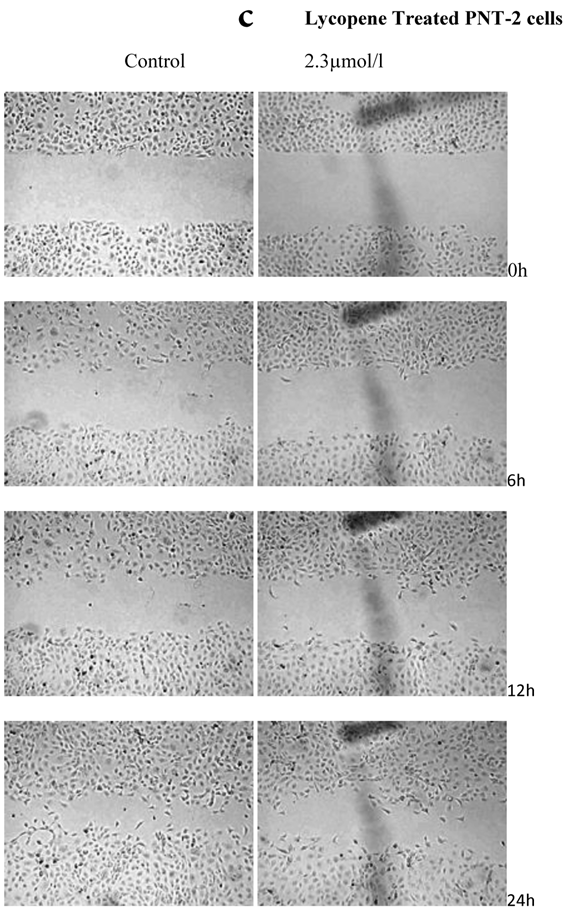 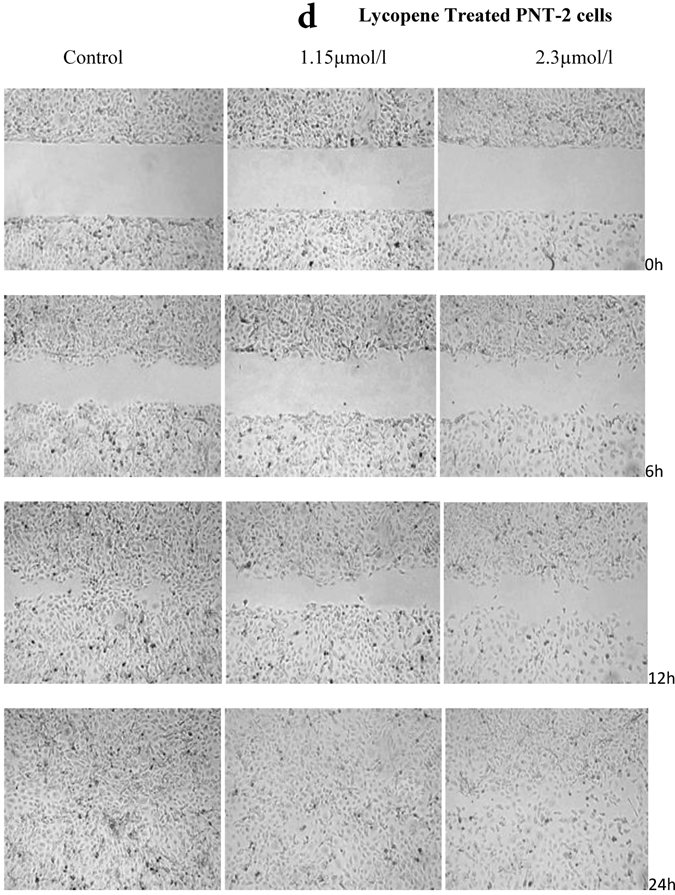 In the present study, lycopene inhibited adhesion of cancer cells to Matrigel™ as well as influenced the migratory properties of cancer cells at a physiologically relevant concentration of 1.15µmol/l. A similar effect was shown by Hwang and Lee in SK-Hep1 hepatocellular carcinoma cells [5]. However the lycopene concentration of 10µmol/l used in their study exceeded our maximum concentration of 2.3µmol/l lycopene. In our study, lycopene reduced motility rates of PC3 prostate cancer cells by up to 40% at concentrations as low as 1.15µmol/L. Lycopene showed maximum inhibition of adhesion in PC3 cells, however its anti-motility effect was more pronounced in DU145 with an overall inhibition of migration of 58% and 68% at final concentrations of 1.15 and 2.3µmol/l, respectively. To our knowledge, this is first study in which adhesion and migratory properties of aggressive prostate cancer lines have been studied at physiologically achievable concentrations of lycopene, i.e. 1-2µmol/l. It was interesting to see that lycopene showed only a small effect on the adhesion and migration properties of the immortalised normal prostate epithelial cell line PNT2.

Diagnosis as well as treatment of cancer is often preceded by years of cancer progression. At presentation, many patients may already have metastases. Identification of dietary components that can intercept the process in its early stages and knowledge of the concentration that is likely to be effective is therefore valuable. In our study, lycopene at a concentration of 0.58µmol/l failed to affect adhesion and migration (results not shown) of prostate cancer cells. This helps explain why lycopene failed to show protective effects in cancer patients at plasma concentrations of ~ 0.60µmol/l [7,8]. Lycopene demonstrated a significant inhibitory effect at 1.15µmol/l, though the effect on both adhesion and migration was more pronounced at a final concentration of 2.3µmol/l. This last concentration may be difficult to achieve in vivo, although one report suggests a rise in plasma lycopene to 2.08µmol/l when participants consumed half a cup of tomato sauce daily for two weeks [9]. An increase in plasma concentrations to ~1.15µmol/l has been shown to be easily achievable in both healthy individuals and prostate cancer patients [10,11]. Results from our present study and a previous report [4] have shown that at above concentrations, lycopene can intercept the mechanisms important in metastasis. We therefore suggest that clinical intervention studies in cancer patients should select a dose of lycopene that is likely to increase plasma lycopene levels to more than 1.2 µmol/L.

In conclusion, the present study provides in vitro evidence to support the previous clinical observations that reported lower incidence and less aggressive nature of prostate cancer in those who regularly consumed tomato based products. Our study also suggests concentrations at which biological effects of lycopene are likely to occur and are therefore relevant for further investigation into the clinical efficacy of this nutrient. Further studies are underway in our laboratory to examine the molecular pathways through which lycopene is likely to influence the invasive properties of cancer cells.

The authors would like to thank DSM Nutrition Products limited for their generous gift of the lycopene used in the present study.