The S100 protein family member S100A4 regulates various cellular functions. Previous studies have shown that elevated expression of S100A4 is associated with progression and metastasis of colorectal cancer (CRC). However, little is known about whether and how S100A4 contributes to CRC development. In our present study, the elevated expression of S100A4 in CRC tissues compared to matched adjacent normal tissues was confirmed by immunohistochemistry, semi-quantitative RT-PCR and Western blot. Adenovirus-mediated S100A4 overexpression obviously enhanced viability and migration of CRC cells, which was detected by MTT assay and transwell assay, respectively. Additionally, S100A4 overexpression increased the phosphorylation levels of Akt, mTOR and p70S6K. These effects of S100A4 were abolished by treatment with either the specific PI3K/Akt inhibitor LY294002, or the specific mTOR/p70S6K inhibitor rapamycin. Furthermore, overexpression of S100A4 resulted in upregulation of VEGF and downregulation of E-cadherin, which were strongly reversed by either LY294002 or rapamycin. Altogether, our results demonstrate that activation of the PI3K/Akt/mTOR/p70S6K signaling pathway is involved in S100A4-induced viability, migration, upregulation of VEGF and downregulation of E-cadherin in CRC cells.

S100A4, also known as metastasin (Mts1), p9Ka, CAPL, calvasculin, fibroblast-specific protein (FSP1), pEL-98, 18A2, and 42A [3], is a member of the low-molecular calcium binding S100 protein family, which consists of at least 21 members that possess a various biological functions including cell survival, motility, adhesion and migration [4, 5, 6]. Aberrant expression of S100A4 was found in different types of tumors including CRC [7-11], gastric cancer [12], breast cancer [13], pancreatic carcinoma [14] and lung squamous cell carcinoma [15]. Overexpression of S100A4 has been implicated in tumor growth, angiogenesis, epithelial-mesenchymal transition (EMT), extracellular matrix remodeling and metastasis [16, 17]. Thus, S100A4 is assumed to be a marker for poor prognosis and high risk of distant metastasis [3, 7, 8]. However, the precise role and potential molecular mechanism of S100A4 in CRC tumorigenesis still remain to be fully elucidated.

The phosphatidylinositol-3-kinase/protein kinase B (PI3K/Akt) signaling pathway is associated with multiple cellular functions such as cell proliferation, differentiation and intracellular trafficking, all of which are involved in cancer development. Mammalian target of rapamycin (mTOR), an important downstream target of PI3K/Akt, positively regulates the serine/threonine kinase p70 S6 kinase (p70S6K) and eukaryotic translation initiation factor 4E binding protein 1 (4E-BP1), which constitutes a main pathway for cell proliferation, survival, differentiation and angiogenesis [18, 19]. Previous study has demonstrated that Akt, mTOR and p70S6K are significantly activated in CRC tumor tissues [20-23].

In this study, we investigated the effects of S100A4 on viability and migration in CRC cells and the potential role of the PI3K/Akt/mTOR/p70S6K signaling pathway in these functions of S100A4.

Tumor tissues and matched adjacent normal mucosa tissues from five randomly clinical-diagnosed CRC patients were provided by the First Affiliated Hospital of Chongqing Medical University, Chongqing, China. No patient underwent any therapy before surgery. This study was approved by the Ethics Committee of Chongqing Medical University (protocol number 2012-19). All tumor tissue samples were acquired at the time of surgery, immediately frozen in liquid nitrogen and kept at -80˚C.

The expression of S100A4 in human CRC tissues and matching adjacent normal mucosa tissues was examined by immunohistochemistry. After fixed with formalin and embedded with paraffin, the sections were deparaffinized in xylene and dehydrated in a gradually decreasing concentrations of ethanol series, then incubated in 10 mM sodium citrate buffer in a microwave oven (500 W) for 20 min. After inactivation of the endogenous peroxidase activity with 3% hydrogen peroxide at room temperature for 10 min, the sections were blocked with 10% normal goat serum for 1 h, followed by incubated with primary S100A4 antibody (1:100) overnight at 4˚C. Subsequently, the sections were washed with phosphate buffered saline (PBS) three times, incubated with biotinylated secondary antibody at 37˚C for 30 min, and visualized with 0.05% 3,3'-diaminobenzidine hydrochloride (DAB). Finally, the sections were counterstained with 10% hematoxylin, and photographs were taken using a microscope with a digital camera.

Amplification and infection of recombinant adenoviruses

The recombinant adenoviruses Ad-S100A4 and Ad-GFP were amplified in HEK293 cells. Ad-S100A4 was used to increase S100A4 expression in CRC cells while Ad-GFP was used as a negative control.

The CRC cells were seeded at a density of 1.5×103 cells per well in 96-well plates and incubated at 37˚C. At 24 h, 48 h, 72 h after infection with adenoviruses, and with or without chemical inhibitors in DMEM containing 1% FBS, 20μl of 3-(4,5-dimethylthiazol-2-yl)-2,5-diphenyltetrazolium-bromide (MTT, Promega, WI, USA) was added to each well. After incubation for 4 h, the culture medium supernatant was removed and the formazan was dissolved with dimethyl sulfoxide for 10 min at room temperature. The spectrophotometric absorbance was measured at 492 nm using a microtiter plate reader (Tecan Sunrise, DE, USA).

The cell migration assay was performed with 24-well Millipore transwell chambers (Millipore Corporation, MA, USA). CRC cells (4×104 cells per well) at 24 h after Ad-S100A4 infection, with or without inhibitors, were trypsinized, washed, and suspended in 400 μl of serum-free DMEM and seeded in the upper chamber. The lower chamber was filled with 600 μl of DMEM containing 20% FBS as a chemoattractant. After incubation at 37˚C for 24 h, the migrated cells on the lower surface of membrane were washed with PBS, fixed in 4% paraformaldehyde for 20 min, stained with crystal violet solution (Sigma-Aldrich, Saint Louis, MO, USA). The migrated cells were photographed and counted.

All experiments were repeated at least thrice, and the values were expressed as mean ± standard deviation (mean ± SD). All data were analyzed by using SPSS version 15.0 software (SPSS Inc, IL, USA). Statistical significance was evaluated using the independent sample t-test, and a value of P<0.05 was considered to be statistically significant.

To validate that S100A4 expression is elevated in CRC, we examined the mRNA and protein levels of S100A4 in human CRC and matched adjacent normal mucosa tissues. As expected, elevated mRNA and protein levels of S100A4 were detected in CRC tissues from five randomly clinical-diagnosed CRC patients by semi-quantitative RT-PCR and Western blot, respectively (Fig. 1A, 1B). Elevated S100A4 protein expression was further confirmed by immunohistochemistry, in which S100A4 was mainly detected in the cytoplasm and cell membrane in tumor cells (Fig. 1C). In contrast, S100A4 was undetectable in matched adjacent normal tissues (Fig. 1A, 1B, 1C). 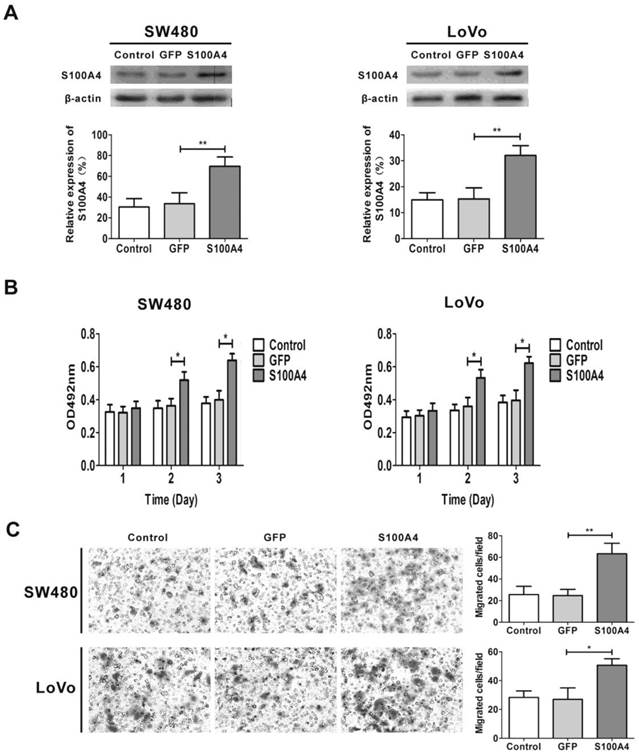 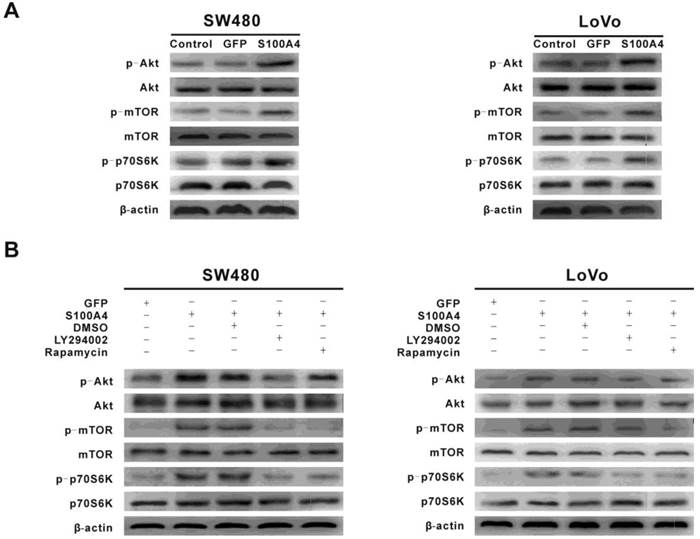 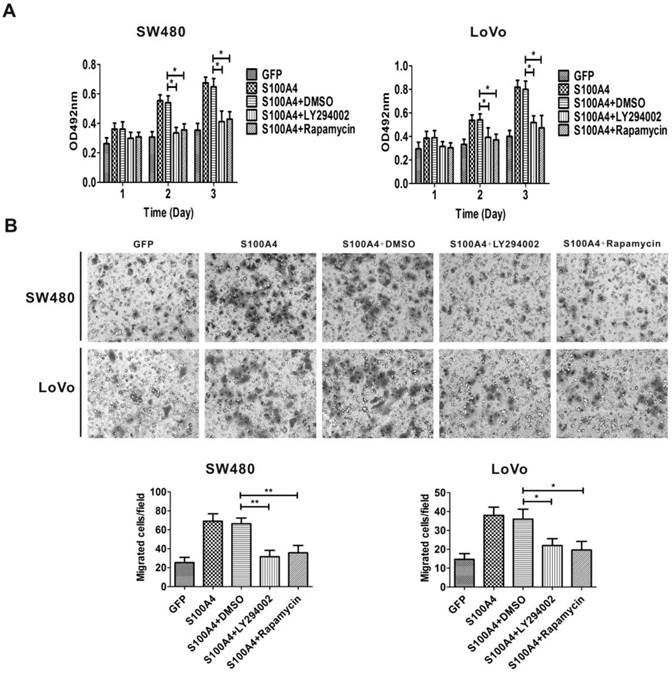 Over the past decades, molecular genetic studies have revealed gene alterations including a number of well-known oncogenes and tumor suppressors underlying the pathogenesis mechanism of CRC [24, 25]. Substantial clinical evidences have implied S100A4 as an important gene associated with CRC progression, metastasis, and survival [7, 8, 10]. Consistent with previous reports, mRNA and protein expression of S100A4 in human CRC tissues were obviously increased. Accumulating evidences suggest that S100A4 modulates a wide range of cellular processes ranging from angiogenesis to cell motility, adhesion, migration, and invasion [9]. For instance, S100A4 regulates the interaction between myosin and actin to impact rearrangement of the cytoskeleton [26]. Several studies have reported that S100A4 contributes to cell invasion and angiogenesis through upregulation of matrix metalloproteinases (MMPs) [27-29]. Additionally, downregulation of S100A4 expression in colorectal cancer cells suppressed cell growth, invasion and metastasis formation [30, 31]. In agreement with these studies, our data showed that CRC cells SW480 and LoVo with S100A4 overexpression had significantly increased viability and migration. 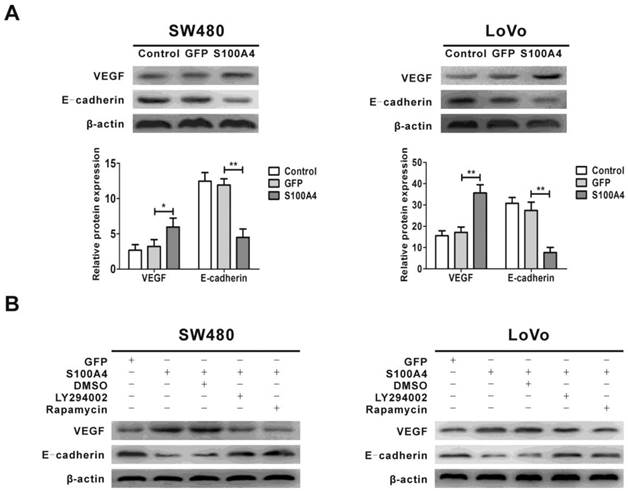 It is well known that vascular endothelial growth factor (VEGF) is one of the most potent endothelial cell mitogens [32]. It not only increases formation of vascular capillary lumens, but also promotes cancer cell proliferation, invasion, and subsequent metastasis [33]. Previous studies have shown the overexpression of VEGF in human CRC, and VEGF could be a prominent angiogenic factor for induction of angiogenesis during CRC development [34, 35]. In transgenic mice, S100A4 has been shown to be a potent stimulator of angiogenesis [36]. In gastric carcinoma, positive correlation between expression of S100A4 and VEGF was found, which was associated with lymph node metastasis and prognosis [37]. S100A4 silencing suppressed proliferation, angiogenesis and invasion in thyroid cancer cells, which was associated with downregulation of VEGF [38]. High expression of S100A4 and VEGF were concurrently detected in colorectal cancer [39]. Our data showed that VEGF was upregulated by S100A4 overexpression in CRC cells through activation of the PI3K/Akt/mTOR/p70S6K pathway. On the other hand, VEGF is recognized as a potent PI3K/Akt activating factor [40]. While how S100A4 activates the PI3K/Akt/mTOR/p70S6K pathway is currently unclear, it is interesting to explore the possibility in future study that a VEGF autocrine establishes a positive feedback loop for S100A4-induced activation of this pathway and CRC cell viability and migration.

The PI3K/Akt signaling pathway plays a pivotal role in cell proliferation, apoptosis, survival, migration, invasion and metastasis [46]. A number of studies suggest that aberrant activation of the PI3K/Akt signaling pathway is associated with human CRC [47, 48]. The mTOR kinase lies downstream of the PI3K/Akt signaling pathway and facilitates phosphorylation of p70S6K and 4E-BP1 [49]. Previous findings demonstrated frequent changes of the PI3K/Akt/mTOR pathway in human CRC [50, 51]. The PI3K/Akt/mTOR pathway regulates VEGF expression in different tumors for angiogenesis [52, 53]. In human esophageal squamous cells S100A4 regulates E-cadherin expression through Akt [54]. In this report, we found that the phosphorylation levels of Akt, mTOR and p70S6K were activated by S100A4 overexpression and suppressed by the PI3K/Akt inhibitor LY294002 in SW480 and LoVo cells. The mTOR/p70S6K inhibitor rapamycin only inhibited the phosphorylation levels of mTOR and p70S6K. Moreover, inhibitor of PI3K or mTOR activity blocked S100A4-induced viability, migration, VEGF upregulation and E-cadherin downregulation of CRC cells. These results establish that S100A4 induces viability and migration in CRC cells through the PI3K/Akt/mTOR/p70S6K signaling pathway.

Altogether, our results suggest that activation of the PI3K/Akt/mTOR/p70S6K pathway contributes to S100A4-induced viability and migration in CRC cells. Therefore, this S100A4-mediated colorectal carcinogenesis signaling pathway could be a therapeutic and preventive target against CRC.

This work was supported by the Natural Science Foundation of China (No. 30772548), and the 973 Program of the Ministry of Science and Technology of China (No. 2011CB707906). We thank Dr. Tongchuan He for the Ad-GFP and Ad-S100A4 recombinant adenoviruses.