Conclusion: Our data suggest that an increase in RV mass in IDC may be explained by two mechanisms: First, as a consequence of the myopathic process itself resulting in a balanced hypertrophy of both ventricles. Second, due to the chamber specific burden of pulmonary artery pressure rise, resulting in unbalanced RV hypertrophy.

In patients with idiopathic pulmonary hypertension (IPH) important insights into the interaction between pulmonary circulation and the right ventricle (RV) have been gained in recent years. RV hypertrophy leading to an increase in right ventricular muscle mass (RVMM) is viewed as an initial adaptive process to afterload increase in these cases. It was suggested that identification of hypertrophy measured by RVMM may provide important information, that identifies the effect of elevated pulmonary artery pressure on RV function earlier than RV ejection fraction (RVEF)1. When RVMM was normalized to left ventricular musle mass (LVMM) the resulting ventricular mass index was shown to provide a more accurate noninvasive estimate of pulmonary artery pressure than Doppler echocardiography2.

Although chronic pulmonary hypertension in heart failure carries important functional and prognostic implications, the mechanisms of RV hypertrophy in IDC have been hardly investigated. It is not clear, if RV pressure overload has a significant impact on RV mass in the setting of IDC and if this impact results in a an unbalanced RV to LV mass ratio. Conversely, heterogeneity in the LV hypertrophic response may itself affect the ventricular mass relation. To answer these questions our study combined MRI and hemodynamic data to provide an comprehensive analysis of determinants of RV mass in IDC.

Thirty- five consecutive IDC patients with reduced left ventricular ejection fraction (LVEF < 40%) and NYHA functional class ≥ 2 were included. All patients were referred to diagnostic cardiac left and right catheterisation to evaluate suspected heart disease. All patients underwent cardiac magnetic resonance imaging (MRI) examination. The diagnosis of IDC has been established on the basis of the exclusion of other causes of left ventricular (LV) dysfunction. Significant stenoses of the epicardial arteries (> 50% of the luminal diameter) were excluded by coronary angiography. Patients with valvular heart disease or primary pulmonary hypertension were excluded from this study. Active myocarditis and myocardial infiltrative and storage diseases were excluded according to MRI criteria. All patients had sinus rhythm and had no evidence of fluid retention at the time of the study. Heart failure medication was maxed out in all patients and described according to the current guidelines. Medication was not changed for 4 weeks before the study. MRI data and derived parameters were compared to those of a control group, which received examination for evaluation of chest discomfort. Patients of the control group had a normal general examination, a normal rest and exercise electrocardiogram, a normal echocardiography and normal cardiovascular MRI.

All cardiac MRI scans for the assessment of LVMM and RVMM, ejection fraction and volumes were performed on a 1.5- Tesla system (Sonata Magnetom, Siemens Medical Solutions, Erlangen, Germany). Images were gated with a precordial ECG and acquired during end-expiratory breathhold. Cardiac cine images were obtained by true fast imaging with steady state precession (TrueFisp, Siemens Medical Solutions) with a repetition time of 3.98 ms, an echo time of 1.2 ms and a flip angle of 80°. The angulation of the LV long axis view was defined in a transverse and a parasagittal scout image using T1- weighted spin echo sequences. The LV short axis view was defined as imaging planes perpendicular to the left ventricular long axis view. Contiguous short axis images were acquired with a slice thickness of 7 mm and an interslice gap of 3 mm from apex to the cardiac base. Image analysis was performed using a analytical software package (CMR Tools; Cardiovascular Imaging Solutions, London, UK). End-diastole and end-systole were defined by the phase images with the largest and smallest cavity volumes. The endocardial border of the right and left ventricle was manually contoured at end-diastole and end-systole in each slice of the contiguous short axis images. The epicardial border was outlined at end-diastole in each of these images. Blood volumes above the cardiac valves were excluded from left and right ventricular volume measurement. The ventricular septum was defined as part of the LV. Papillary muscles were included in the mass and excluded from the volume. RVMM and LVMM were calculated as the epicardial volume minus the endocardial volume multiplied by the specific gravity of myocardium (1.05 g/cm). Right and left ventricular volumes were calculated by summation of ventricular cavity areas at end-systole and end-diastole multiplied by slice thickness.

Besides quantification of absolute right and left ventricular muscle mass a linear and non-linear normalization strategy was used to eliminate the association of ventricular mass with body size:

To characterize hemodynamic, geometric and clinical features associated with an increased right ventricular muscle mass patients were divided into three subgroups according to the tertiles of RVMM-AI. To evaluate the strength of relation between variables associated with RVMMI and RVMM-AI a correlation analysis within the whole group of IDC patients was performed. To identify potentially independent determinants of right ventricular muscle mass in IDC patients a forward stepwise multivariate regression analysis was performed.

All statistical analysis was performed using SPSS statistical software (version 15.0; SPSS Inc., Chicago, Ill., USA). Data are expressed as means ± SD. Patients were grouped into tertiles based on the distribution of RVMM-AI (subgroup A ≤ 1.17, subgroup B > 1.17 ≤ 2.51, subgroup C > 2.51). ANOVA or a χ2- test was used for comparisons between tertiles. Differences between each pair of groups were assessed by the Tukey test.

To select variables independently related to RVMM a multivariate regression analysis was performed. Two models incorporating RVMM-AI or RVMMI as independent variables were evaluated. All parameters that correlated significantly with these indices were submitted to a forward stepwise multivariate regression model except those who a part of the calculation formula of RVMMI or RVMM-AI or those who were related to the right ventricle itself.

Comparison of cardiac geometry in IDC and healthy subjects

Differences between IDC patients and a healthy control group regarding baseline characteristics are summarized in Table 1.

Intra-group comparison of IDC patients according to RVMM-AI

Anthropometric, hemodynamic and MRI data in patient subgroups based on the distribution of RVMM-AI 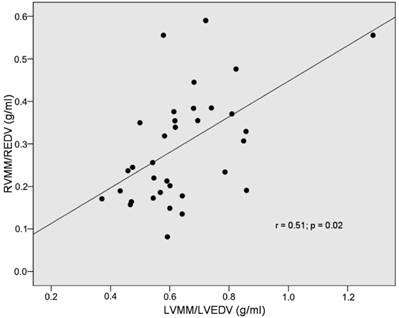 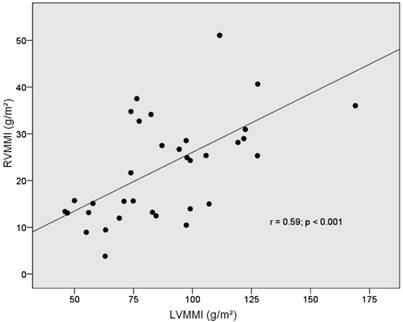 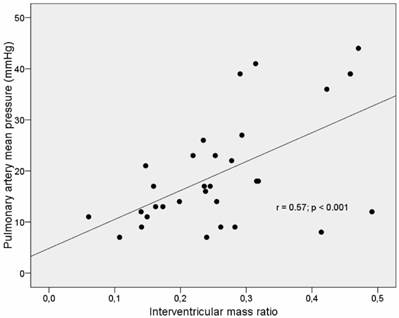 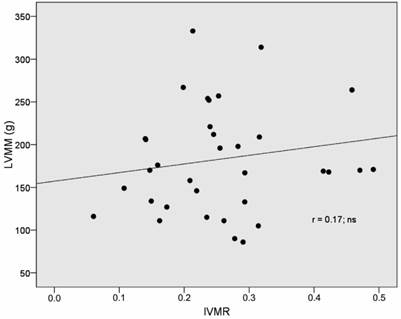 In idiopathic dilated cardiomyopathy left ventricular geometry is characterised by an eccentric hypertrophy5,6, notably in patients with advanced stages of IDC7. Our study confirmed this pattern by demonstrating a significant left ventricular dilatation and an increase in left ventricular mass in these patients. Surprisingly, a concomitant increase in right ventricular mass was not observed. Although RV dilatation was clearly evident, average right ventricular muscle mass was not increased. This finding indicates that wall thinning and thus RV eccentric remodelling is the typical RV phenotypic response pattern in IDC. In concordance with this view Doherty et al.8 showed no significant difference in RV muscle mass between IDC and control patients. The significant elevation of RV mass demonstrated by Quaife et al.9 and Beltrami et al.10 may be explained by a more advanced stage of myopathic disease and technical factors. In contrast to our patients who were evaluated under stable clinical conditions and modern drug therapy both studies comprised post-mortem specimens suggestive of end-stage disease. Furthermore, imaging based quantification of myocardial RV mass excluding papillary muscles may have contributed to these divergent findings.

One important finding of our study was that the myopathic process resulted in a significant reduction of the interventricular mass relation. In healthy subjects RV free wall comprises about 30% of total mass. In IDC this relationship is significantly altered due to an imbalanced increase in LV mass. As a result, the RV comprises about 20% of LV mass. The observed shift in RV/LV mass ratio is in good concordance with the above mentioned data by Doherty et al.8.

Although obvious, the issue of pressure overload induced RV hypertrophy has hardly been addressed in the setting of left sided heart failure. In IPH the myocardium bears no intrinsic abnormalities and RV hypertrophy develops as a compensatory response to elevated RV afterload11,12,13. Our study demonstrated a significant relationship between RV muscle mass and pulmonary artery pressure in IDC. There are two possible explanations for this finding. First, the adaptive capabilities of the RV myocardium to pressure overload are preserved in heart failure patients. And second, RV hypertrophy may result from the myopathic process itself. In this scenario pulmonary hypertension may probably reflect a more advanced stage of myocardial disease and hemodynamic burden and a true causal relationship to RV hypertrophy may be lacking.

In contrast to variations in left ventricular muscle mass, variations in right ventricular muscle mass had a significant impact on the IVMR. We suggest that this finding is an expression of a second, unbalanced form of ventricular hypertrophy present in heart failure, which is closely related to RV pressure overload. We assume that RV hypertrophy due to pressure overload develops as a chamber-specific phenomenon in IDC patients and does not induce LV hypertrophy. As a consequence of this unbalanced form of biventricular hypertrophy IVMR increases as right ventricular mass increases. Most previous studies reported that in states of isolated RV or LV pressure or volume overload, hypertrophy is usually restricted to the affected ventricle. Vonk- Noordegraaf et al.14 reported that patients with severe emphysema had an elevated right ventricular muscle mass and that RV hypertrophy resulted in a significantly increased RV/LV wall thickness ratio in presence of a normal RV/LV volume ratio. Leeuwenburgh et al.15 demonstrated that chronic RV pressure overload led to a significant increase in right-to-left ventricle wall thickness ratio in neonatal sheep hearts. The principle of a chamber-specific coupling of hemodynamic load and hypertrophy may further be extended to states of biventricular hemodynamic overload. An increased volume load exposed on either ventricle typically results in a balanced ventricular hypertrophy as demonstrated in arteriovenous shunt formations or in the athletes heart16,17. However, exceptions from this principle have been noted. In multivariate analysis Cuspidi et al.18 found that RV wall thickness was the best independent correlate of LVMM in patients with essential hypertension. In this study right ventricular hypertrophy was associated with LV hypertrophy in one- fifth of the patients. Gottdiener et al.19 demonstrated that in patients with LV pressure overload RV hypertrophy is closely related to LV hypertrophy but not to pulmonary hypertension. A possible explanation for this apparently conflicting result is that the majority of patients reported in this study had arterial hypertension. The latter condition is known to induce myocardial hypertrophy on a multifactorial basis including humoral factors that may affect both ventricles19.

The hemodynamic burden exposed to the right ventricle was characterized in terms of singular pressure measurements. Left atrial volume estimation and quantification of functional mitral regurgitation was not performed. Such measurements are supposed to provide more reliable information on the average effect of LV filling pressure and subsequently pulmonary artery pressure rise over time. Inclusion of papillary muscles into right ventricular mass measurements may explain a systematically higher RV mass than predicted. Despite careful application of two different normalization methods including an allometric model (the most advanced to our knowledge), a strong correlation between body weight and RVMM remained. The reason for the exaggeration of the RVMM-weight relationship in our population is not clear. Since body weight is incorporated into both normalization formulas it was not introduced into the multivariate regression model.

The present study revealed two important characteristics of RV hypertrophy in IDC patients. First, there is a close relationship between left and right ventricular muscle mass. This finding indicates that ventricular remodelling of both ventricles is coupled probably due to a shared myopathic process. Second, RV hypertrophy is further determined by the extent of pulmonary artery pressure rise indicating that there is a preserved ability of the RV to respond to an increased afterload. This component of RV hypertrophy has no impact on LV hypertrophy and can therefore be considered as a chamber-specific phenomenon.