MicroRNA-365 (miR-365) plays crucial roles in regulating cell proliferation, apoptosis and differentiation in various cell types. However, its function in vascular smooth muscle cells (VSMCs) is largely unknown. In our study, we found miR-365 was highly expressed in adult rat carotid arteries, but was significantly decreased in rat carotid arteries after balloon injury, a process involving neointima formation and VSMC proliferation. In vitro, the miR-365 significantly inhibited cell proliferation of isolated primary rat aortic VSMCs. Furthermore, we identified that cyclin D1 was a direct target of miR-365 in VSMCs. The miR-365 suppressed cyclin D1 expression on both mRNA and protein level. Luciferase reporter assay demonstrated that miR-365 inhibited cyclin D1 through targeting its 3'UTR. Importantly, cyclin D1 overexpression rescued the inhibitory effect of miR-365 on VSMCs proliferation. Taken together, by our studies, we identified a new MicroRNA, miR-365, involving in the pathological process of vascular injury, which inhibits VSMC proliferation through targeting cyclinD1.

Vascular smooth muscle cells (VSMCs) are the main cell type of vascular wall and play an important role in vascular development and disease. VSMCs have high rate of proliferation and migration during early embryonic stages of vasculogenesis, while in adult blood vessels VSMCs become quiescent and proliferate at a very low rate [1]. Unlike skeletal and cardiac muscle cells which are terminally differentiated cells, VSMCs retain remarkable plasticity and can undergo phenotypic switching. In various forms of vascular diseases such as atherosclerosis, restenosis, vein bypass graft failure, and transplant vasculopathy, VSMCs switch from contracting phenotype to secreting phenotype, proliferate, and migrate into intima, contributing to neointima formation [2].

In the present work, we demonstrated that miR-365 expression was significantly decreased in neointima formation model of rat carotid arteries in vivo, and miR-365 inhibited cell proliferation through targeting cyclin D1 in primary rat VSMCs in vitro. Our findings suggest that miR-365 probably is a novel important modulator for neointima formation.

Primary vascular smooth muscle cells were isolated from the thoracic aortas of male Sprague-Dawley rats as previously described [9]. The VSMCs were cultured in Dulbecco's modified Eagle's medium (DMEM)/F12 medium containing 10% fetal bovine serum (FBS, SV30087.02, Hyclone) with 1% penicillin-streptomycin, and maintained at 37°C in a humidified atmosphere containing 5% CO2. The cells used in the experiments were from passage 3 to 5. Cells were individually plated on tissue culture plates or dishes 24 h before transfection. Transient transfection of miRNA mimics and control oligonucleotides (Genepharm) at a final concentration of 50 nM was accomplished with polyplus reagent (jetPRIME®). The cyclin D1 expression vector was constructed by inserting human cyclin D1 cDNA into the pCMV-HA vector (pCMV-HA-cyclinD1).

Cell count: 5×104 cells were seeded into 24-well plate in triplicate, and then transfected with miRNAs as described above [19]. After 6h transfection, the medium was changed into serum-free DMEM/F12 for starvation. 24 hours later, normal serum medium (10% FBS) was added (0h), and the cell number was counted at 24h, 48h, or 72 h under microscope using a hemocytometer.

BrdU incorporation assay: BrdU incorporation assay was performed and analyzed as described previously [10]. Briefly, cells grown on glass coverslips were labeled with 10 μM BrdU every eight hours. 24 hours later, the cells were fixed in 4% paraformaldehyde (PFA) for 30 minutes, and permeabilized in 0.5% Triton X-100 in PBS (pH 7.4) for 10 minutes. The fixed cells were incubated with 4N hydrochloric acid for 30 minutes at 37°, and were pre-blocked with goat serum for 30 minutes, and then incubated with rat anti-BrdU antibody (ab6326; 1:100; abcam) overnight at 4ºC. The sections were washed in PBS and incubated with goat anti-rat IgG/FITC for 1h at room temperature (ZF-0315; 1:200; ZSGB-Bio, Beijing, China). The nuclei were labeled with 4', 6-diamidino-2-phenylindole (DAPI). The BrdU incorporation rate was expressed as the percentage of BrdU-positive cells to total cell number per field.

Carotid artery balloon injury was induced in male Sprague-Dawley rats (300 g) as previously described [9]. In brief, animals were anesthetized with urethane (600 mg/kg) intraperitoneally. The left common carotid artery was exposed through a midline cervical incision. The catheter was advanced from just under the proximal edge of the omohyoid muscle to the carotid bifurcation three times with a 2F (60 cm) Fogarty catheter (Baxter, McGaw Park, IL). To attain a constant degree of vessel wall injury for each of the animals, we kept the diameter of the balloon and the resistance during withdrawal constant for each of the animals. All procedures were performed by a single operator. Five rats were used in each group. All animal experiments were approved by the Animal Experiment Committee of the Institute of Biotechnology.

At 14 days after surgery, left carotid arteries were dissected and fixed with 4% PFA overnight. The arteries were subsequently paraffin-embedded, and serial 5-μm sections were cut. For morphometric analysis, sections were stained with hematoxylin and eosin (H&E) after deparaffinisation and rehydration. Immunohistochemistry staining of cyclin D1 was done using rabbit anti-cyclin D1 (2261-S; 1:200; epitomics) and goat anti-rabbit IHC kit (SP-9001; 1:200; ZSGB-Bio)

miR-365 is expressed in rat carotid arteries, and is significantly decreased after balloon injury

When we detected miR-365 expression pattern in various tissues of rat by real-time PCR, we observed that, except stomach, miR-365 was significantly more expressed in aorta and carotid mainly composed of vascular smooth muscle cells, compared to other tissues (heat, liver, lung etc) (Fig. 1A). To evaluate whether miR-365 was involved in neointima formation, we subjected rats to carotid balloon injury, a well-established in vivo experimental model to study neointima formation [20]. At 14 days after surgery, the injured carotid shows obviously narrow vascular cavity, with thicker intima and media compared to no injury control (Fig. 1B). Real-time PCR analysis revealed that miR-365 expression was significantly down-regulated in the injured carotid arteries compared to control group (Fig. 1C, n = 5, P < 0.01). These results suggested that miR-365 may play a role in neointima formation.

The increased VSMC proliferation is contributed to the pathogenesis of neointima formation [21]. In our study, we evaluated the function of miR-365 in VSMC proliferation. The miR-365 was over-expressed using chemically synthesized mimic in primary rat aortic vascular smooth muscle cells. The Real-time PCR results showed that miR-365 expression was significantly increased by 51.3 folds after transfection (Fig. 2A). Next, we counted VSMCs cell number at different time points after miR-365 mimic transfection. At 48 hours post-transfection, the cell number was decreased by 40% in the miR-365-mimic-transfected cells compared with negative control (NC) cells (P < 0.01), and this decrease was pronounced by 60% at 72 hours (P < 0.01) (Fig. 2B). Furthermore, we detected whether the inhibitory effect of miR-365 on VSMC proliferation was due to cell division through BrdU incorporation. We observed that the percentage of BrdU-positive cells was significantly decreased by 58% (P < 0.01) (Fig. 2C). These results showed that miR-365 significantly inhibits VSMC proliferation. 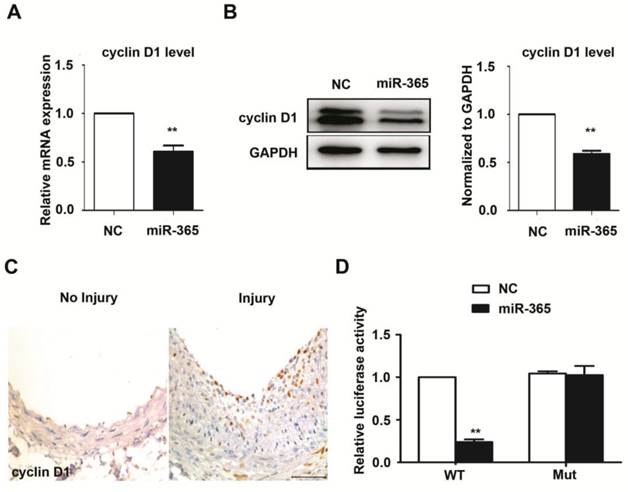 In the present study, we found that miR-365 had a high expression in vascular smooth muscle tissues such as carotid, and was dramatically decreased in carotid arteries after balloon injury. Next, we demonstrated that miR-365 significantly inhibited cell proliferation in primary rat VSMCs. Moreover, we revealed that cyclin D1 was a direct target of miR-365, and cyclin D1 overexpression blocked the inhibitory effect of miR-365 on VSMC proliferation.

Our further study identified cyclin D1 as a direct target of miR-365 in primary VSMCs. To evaluate whether the decreased cyclinD1 mediates the inhibitory effect of miR-365 on VSMCs proliferation, we over-expressed cyclinD1 in primary rat aortic smooth muscle cells, and found that cyclin D1 overexpression partially rescue the inhibition of VSMCs proliferation after miR-365 transfection. The MicroRNA is known to have hundreds of targets to mediate its function [3]. In this study, although we provide evidence to show cyclin D1 is the target of miR-365 in VSMCs, we could not rule out that the other targets mediate the inhibitory effect of miR-365 on VSMC proliferation.

In summary, we demonstrate that miR-365 inhibits VSMC proliferation through targeting cyclin D1. The down-regulation of miR-365 in injured carotid arteries suggests that miR-365 may participate in the neointima formation, and can be used as a potential therapeutic target in preventing vascular proliferation diseases.

This study was funded by the National Natural Science Foundation of China (NO. 81270165), and State Key Laboratory of Proteomics Grant (No. SKLP-K201102).