Two key virulence factors of Helicobacter pylori are the secreted virulent proteins of vacuolating toxin A (VacA) and cytotoxin associated protein A (CagA) which lead to damages of gastric epithelial cells. We previously identified that the cyanidin 3-O-glucoside (C3G) inhibits the secretion of both VacA and CagA. In the current report, we show that C3G inhibits VacA secretion in a dose-dependent manner by inhibiting secretion system subunit protein A (SecA) synthesis. As SecA is involved in translocation of bacterial proteins, we predicted that inhibition of the SecA pathway by C3G should decrease H. pylori-induced cell death. To test this hypothesis, the human gastric cell line KATO III cells were co-cultured with H. pylori 60190 (VacA+/CagA+) and C3G. We found that C3G treatment caused a decrease in activation of the pro-apoptotic proteins caspase-3/-8 in H. pylori-infected cells leading to a decrease in cell death. Our data suggest that consumption of foods containing anthocyanin may be beneficial in reducing cell damage due to H. pylori infection.

During H. pylori pathogenesis, many virulence factors such as toxins, adhesins, proteases are involved in infecting gastric cells. Among them, vacuolating cytotoxin A (VacA) and cytotoxin associated protein A (CagA) are two important virulence factors contributing to cellular damage. VacA functions as an intracellular-acting protein exotoxin1, and causes cellular apoptosis1, 2, gastric epithelial cell damage by inducing vacuoles3-5. CagA also induces cellular apoptosis6, interleukin-8 secretion7, 8 and cancer development via multiple pathways9-11. Patients harboring a H. pylori strain containing the Eastern type of the cagA gene have a much higher risk developing gastric ulceration and stomach cancer12-14. Although the mechanism by which these two virulent proteins are secreted is still under intense investigation, VacA secretion is regulated by the type Va secretion system (T5aSS) which is SecA-dependent3, 17 whereas CagA secretion appears to occur through the T4SS which is SecA-independent15, 16. Sec proteins are associated with Sec protein in T5aSS3, 15, 18. Of these Sec proteins secretion system subunit protein A (SecA) is an intracellular protein that is involved in translocation of bacterial proteins out of the bacterial plasma membrane19.

There is a positive correlation between consumption of anthocyanin-containing foods and disease prevention20,21. The potential disease-preventive actions of anthocyanins include antibacterial effects22,23, inhibitory effects on the development of peptic ulcers and gastric cancer10,14,24, and reduction in interleukin-8 secretion7. However, in many studies of anthocyanins, crude extracts were used and thus the beneficial effects attributed to anthocyanins are unclear22, 23. In a previous study, we demonstrated that cyanidin 3-O-glucoside (C3G) inhibited secretion of H. pylori virulent proteins21. In the current report, using a newly developed anti-SecA antibody, we found that C3G inhibited synthesis of SecA resulting in inhibition of VacA secretion. In addition, C3G decreased H. pylori-induced apoptosis of KATO III gastric cells.

KATO III (human gastric carcinoma line) was purchased from ATCC. KATO III cells were grown in Iscove's Modified Dulbecco's Medium (IMDM) with 20% FBS at 37°C and 5% CO2 concentration. Cells were seeded in 10-cm plates (5 × 106) 24 h before infection with H. pylori 60190 strain [200 multiplicity of infection (MOI)] and then treated with C3G for two days. Control groups were mock-treated with DMSO.

New Zealand White rabbits (8~10 wk) were purchased from Central Lab Animal Inc. (Seoul, Korea) and allowed to adapt to their new environment for two weeks before the first antigen inoculation. The anti-SecA polyclonal antiserum was generated by intravenous injection of 500 μg of a 22 mer peptide (GTERHESRRIDNQLRGRSGRQG; nucleotide 518-539) every week for a total of six weeks. After six weeks, blood was collected, allowed to clot at 4°C overnight and the serum was isolated after centrifugation. Pre-immune serum was harvested prior to immunization. Antibodies were purified using a protein A column and reactivity to SecA confirmed by ELISA (data not shown). Rabbit anti-H. pylori polyclonal antibody to whole H. pylori 60190 was generated as previously described21.

Cell viability was measured by a quantitative colorimetric assay with 3-[4,5-dimethylthiazol-2-yl]-2,5-diphenyltetrazolium bromide (MTT). After treatment with C3G, cells were incubated with MTT reagent (final concentration 0.1 mg/ml) for 150 min at 37℃. The reaction was terminated by addition of DMSO. The amount of MTT formazon product was determined by measuring the absorbance at 560 nm using NanoQuant spectrophotometer (Infinite M200, TECAN). The change in cell viability was calculated as follows:

The assay of Annexin V and 7-AAD (7-Amino-Actinomycin) binding staining was performed with an Annexin V-PE Apoptosis Detection Kit I according to the manufacturer's instructions (Becton-Dickinson). In brief, cells after H. pylori infection (200 MOI) were detached with 0.25% trypsin without EDTA, and then washed twice with cold PBS, centrifuged at 3000 rpm for 5 minutes. Cells were resuspended in 500 μL of 1× binding buffer at a concentration of 5 × 105 cells/mL, 5 μL Annexin V-PE and 5 μL 7-AAD were added. Cells were gently mixed and incubated for 10 minutes at 37°C in the dark. Transfer 400 μL of cell suspension to flow tubes. Stained cells were analyzed by FACS Caliber flow cytometry (Becton-Dickinson).

We previously showed that C3G inhibited the secretion of virulent proteins in H. pylori resulting in intracellular accumulation in periplasmic space21. In the current study, we conducted a dose response to determine the effective concentration of C3G. H. pylori 60190 were cultured with different concentrations of C3G for three days and the secreted VacA was assessed by Western blot analysis. We found that the levels of both secreted VacA was decreased when bacteria were cultured with C3G starting a 12.5 μM of C3G and this decrease was more pronounced proportionately to increases in C3G concentration (Figure 1A). Consistent with previous results21, the bacterial numbers were unchanged by C3G treatment at all concentrations compared to mock-treated bacteria suggesting that the decrease in secreted VacA was not due to a decrease in bacterial cell numbers (data not shown). The levels of total secreted proteins were similar at all concentrations of C3G used as determined by reactivity to rabbit anti-H. pylori polyclonal antibody showing that the decrease in VacA was specific to C3G treatment (Figure 1A and B). The pre-immune serum showed negligible detection to H. pylori secreted proteins (data not shown). The increased level of VacA was due to inhibition of secretion and not protein synthesis as intracellular levels of VacA did not decrease in response to C3G treatment with C3G (Figure 1C and D). 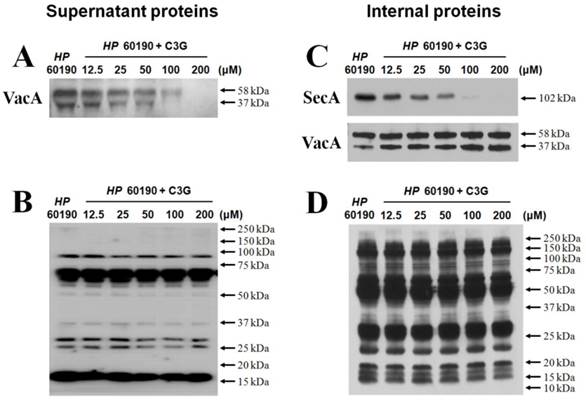 In our previous report we showed that C3G inhibited secA transcription21. SecA is an intracellular protein that facilitates translocation of bacterial proteins out of the bacterial plasma membrane19. The decrease in secA transcription by C3G offers a mechanistic explanation as to why C3G induces intracellular accumulation of VacA. We reconfirmed that C3G specifically inhibits secA transcription by RT-PCR analysis (data not shown). In the current study, we developed SecA specific polyclonal antibodies and tested whether SecA protein levels were also decreased in response to C3G treatment. As expected, we found a dose-dependent decrease in SecA proteins levels in response to C3G treatment in H. pylori (Figure 1C, D). Taken together, our data shows that inhibition of VacA secretion in H. pylori strongly correlates with decreased SecA mRNA transcription and protein synthesis.

VacA causes apoptotic cell death of gastric cell lines. Since C3G inhibits VacA secretion, we predicted that C3G inhibits H. pylori infection-mediated cell death in gastric cells. To test this idea, the human gastric cancer cell line KATO III cells were infected with H. pylori (200 MOI) and treated with C3G (100 μM) for up to 48 hr. Whereas cells infected with H. pylori showed a 42% cell viability at 48 h compared to uninfected controls, the C3G treated group showed a 81% cell viability (p < 0.001, Figure 2). The decrease in cell death was likely due to a decrease in the apoptotic signaling pathway as cells co-cultured with C3G and H. pylori exhibited decreased levels of the pro-apoptotic molecules, cleaved caspase-3, -8 and cleaved PARP compared to non-treated controls (Figure 3). Then the assay of Annexin V and 7-AAD (7-Amino-Actinomycin) binding staining results was also showed reduced apoptosis in H. pylori-infected KATO III when cells were exposed to C3G (100 μM), whereas cell viability of infected cells (HP+ / C3G-) was not recovered compared to uninfected controls (HP- / C3G- or HP- / C3G+) and C3G-treated groups (HP+ / C3G+) as shown in Figure 4A, B (p < 0.001).

VacA secretion occurs via T5aSS3, 15, and it is thought that SecA in H. pylori is bound to the inner membrane complex composed of the Sec-related family proteins SecD, SecF, SecG and SecY19. This protein complex regulates the secretions of various secreted virulence factors such as proteins, toxins and proteases. Our data suggest that C3G down-regulates the secretion of VacA in H. pylori via inhibition of SecA expression and synthesis. Following our prior report21, C3G decreased the secA transcription. If so SecA expression was suppressed by C3G as shown in this report, because VacA secretion is regulated by SecA protein which is bound to inner membrane of H. pylori3,15, VacA secretion might be down-regulated. Thus cell survival rate would be also increased through the inhibition of VacA secretion when H. pylori-infected cells were exposed to C3G. Given that black fruits and crops are an important source of C3G, consumption of these foods may be beneficial in reducing gastric inflammation or stomach cancer due to H. pylori infection. 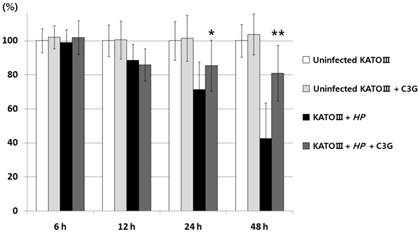 Effects of cyanidin 3-O-glucoside treatment on apoptotic signal pathways in KATO Ⅲ cells. KATO III cells were infected with H. pylori (200 MOI) and exposed to various concentrations of C3G (0~200 μM) for 48 hr. The dose-dependent decreases in expressions of cleaved caspase-3, -8, and cleaved PARP by H. pylori infection (200 MOI) were shown significantly by treatment of C3G. 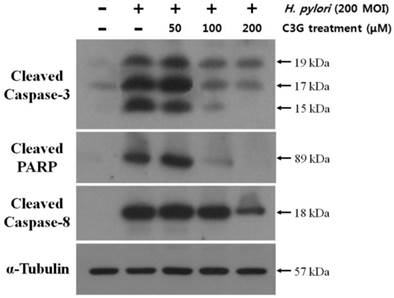 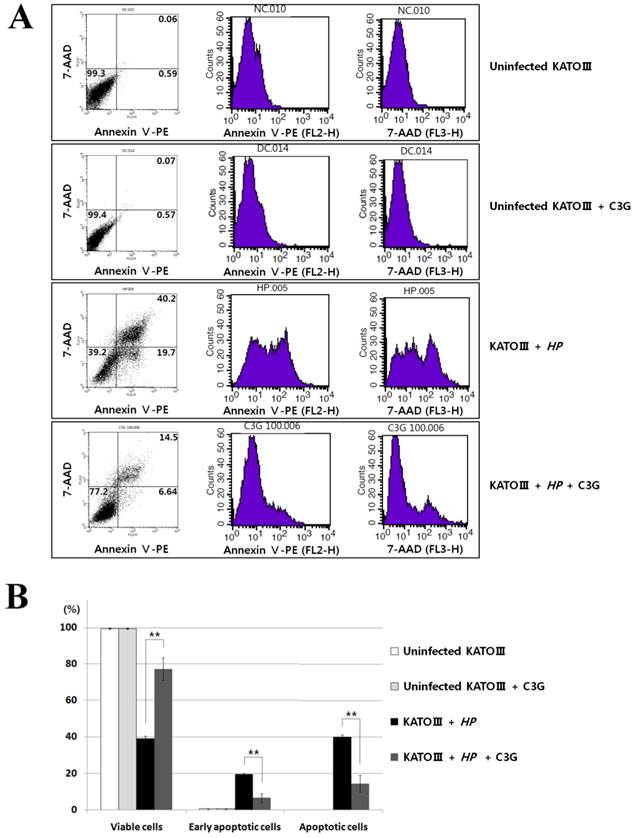 It has been reported that CagA secretion occurs via the T4SS3, 16, 17 and that CagA has no SecA secretion signal for transport25. And many researchers in the past have clearly excluded secretion of CagA in the supernatant26 because CagA is a T4SS effector protein which is only injected into the cells11-13. In this study, the accumulation of intracellular CagA protein into the cell was found repeatedly (data now shown in Figure 1C). It is thought that the accumulation of CagA in bacterial cell might make reduced injection of it into the cells, however this study could not show the evidence about the inhibition of CagA secretion by C3G.

This work was carried out with the supported of the "Cooperative Research Program for Agriculture Science and Technology Development (Project No. PJ010528)”, Rural Development Administration, Republic of Korea.

19. Whitehouse S, Gold VA, Robson A, Allen WJ, Sessions RB, Collinson I. Mobility of the SecA 2-helix-finger is not essential for polypeptide translocation via the SecYEG complex. J Cell Biol. 2012;199:919-929