Previous reports have shown that interferon (IFN)-based therapy decreases the risk of development of hepatocellular carcinoma (HCC) in patients with chronic hepatitis C virus (HCV) infection. However, it remains to be fully elucidated whether elimination of HCV by IFN-based therapy inhibits HCC recurrence after curative treatment, such as surgical resection and local ablation therapies. In this study, we aimed to clarify the influence of a sustained virological response (SVR) after IFN-based therapy on recurrence and survival after curative treatment of HCC. Fifty-one patients who underwent curative treatment of HCV-related HCC after receiving IFN-based therapy were analyzed retrospectively. They were classified into SVR (N = 14) and non-SVR groups (N = 37). In the SVR group, serum levels of aspartate aminotransferase and alanine aminotransferase, the indocyanine green retention rate at 15 min, and the percentages of patients with liver cirrhosis and HCV serotype 1 were significantly lower, whereas serum albumin level and platelet count were significantly higher upon HCC occurrence. Recurrence-free survival (RFS) for the first recurrence was significantly higher in the SVR group (P < 0.01). Multivariate analysis showed that SVR at initial HCC treatment (P < 0.01) and multiple tumors (P < 0.01) are prognostic factors for RFS. Moreover, RFS for the second recurrence showed a similar trend to that for the first recurrence. In conclusion, patients who underwent IFN-based therapy before initial curative treatment of HCC had a favorable clinical outcome compared with non-SVR patients.

Hepatocellular carcinoma (HCC) is one of the most fatal cancers worldwide [1]. HCC develops frequently in patients with cirrhosis caused by hepatitis B virus infection, hepatitis C virus (HCV) infection, and alcohol abuse [2]. Because chronic HCV infection is a major cause of HCC, HCV eradication is considered to be quite important for preventing HCC [3, 4]. Interferon (IFN) has been utilized as an antiviral drug for HCV eradication for approximately three decades. It has been documented that patients with a sustained virological response (SVR) during IFN-based therapy, including combination therapy with peg-IFN and ribavirin, show not only histological improvement through HCV eradication but also a decrease in the risk of HCC development [5-7]. On the other hand, patients who show SVR after termination of IFN-based therapy often develop HCC several years after HCV eradication [8, 9]. Recently, it was stated that IFN-based therapy after curative treatment could impact HCC development and HCC recurrence. However, only a few studies have investigated whether previous IFN-based therapy is helpful for preventing HCC recurrence after curative treatment of HCC [10, 11].

We investigated clinical outcomes after curative treatment for HCC in patients who had received IFN-based therapy for HCV eradication before initial HCC occurrence. We also examined the prognostic factors for HCC recurrence in these patients.

We assessed 79 patients (51 patients in Chiba University Hospital and 28 patients in Numazu City Hospital) diagnosed with HCV-related HCC between 2003 and 2012 with a history of IFN-based therapy before curative treatment of HCC, which included such as radiofrequency ablation (RFA), percutaneous ethanol injection (PEI), and hepatic resection. Twenty-eight patients (4 SVR patients and 24 non-SVR patients), including 14 with local recurrence, 3 with recurrence within 6 months after treatment, and 11 with not undergone suitable follow-up, were excluded (Fig. 1). This study was conducted in accordance with the Helsinki Declaration and approved by the Ethics Committee of Graduate School of Medicine, Chiba University and Numazu City Hospital. Informed consent was obtained from each patient.

SVR was defined as undetectable serum HCV RNA 24 weeks after the end of treatment [12].

Diagnosis of liver cirrhosis and HCC

The diagnosis of cirrhosis was made on the basis of the following criteria: (i) histological examination of biopsy specimens; (ii) clinical manifestation, including gastroesophageal varices, encephalopathy, and ascites; and (iii) thrombocytopenia accompanied by findings suggestive of cirrhosis, such as splenomegaly [13]. HCC was diagnosed on the basis of histopathological examination or the practice guidelines set by the American Association for the Study of Liver Diseases (AASLD) [14, 15].

Treatment and detection of recurrence

There was no significant difference in the period from IFN treatment to initial HCC development in SVR patients and non-SVR patients (67.3±47.0 month's vs 75.1±54.2 months). Treatment of initial HCC was conducted according to the size and number of HCC tumors and hepatic functional reserve assessed by the Child-Pugh classification. If local ablation was chosen, treatment was repeated until complete necrosis of all HCC lesions with a margin of >5 mm was confirmed by dynamic computed tomography (CT). Patients were followed up at our outpatient clinic every 3-6 months by monitoring biochemical and hematological data. Patients were screened using dynamic CT and ultrasonography. If HCC recurrence was suspected, further examinations using magnetic resonance imaging, angiography, and tumor biopsy were performed to confirm the diagnosis. Cases with local recurrences (defined as recurrence at the lesion adjacent to the original tumor) were excluded from the analyses. 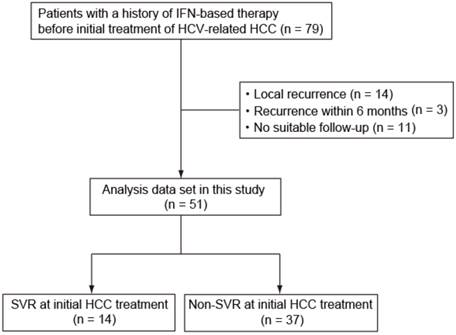 Statistical analyses were performed using SPSS version 19.0 (SPSS Inc. Chicago, IL, USA). Data are the mean ± SD. Statistical differences between two groups were evaluated by the Student's t-test and chi-square test. If the variances were found not to be equal between the two groups, the result of t-tests was adjusted by Welch's correction. Recurrence-free survival (RFS) was calculated using the Kaplan-Meier method. The prognostic relevance of clinical variables was evaluated by univariate analysis with the log-rank test and by multivariate Cox regression. Variables associated with RFS in univariate analysis with P values of < 0.10 were analyzed further for multivariate analysis. P values of < 0.05 were considered significant.

Of 79 patients with a history of IFN-based therapy before initial curative treatment of HCV-related HCC, 51 patients were considered eligible for the analysis. The number of patients treated with RFA, PEI, and resection was 37, 7, and 7, respectively. They were divided into two groups; SVR (n = 14) and non-SVR (n = 37) (Fig. 1). Clinical variables compared between SVR patients and non-SVR patients are shown in Table 1. Serum levels of aspartate aminotransferase (AST) and alanine aminotransferase (ALT), the indocyanine green retention rate at 15 min (ICG R15), and the percentages of patients with liver cirrhosis and HCV serotype 1 were significantly lower in SVR patients than in non-SVR patients. In contrast, the serum albumin level as well as platelet count were significantly higher in SVR patients than in non-SVR patients.

RFS after curative treatment was evaluated. RFS was significantly different between the two groups (P < 0.01) (Fig. 2A). During a median follow-up of 46.6 months in the SVR group and 39.5 months in the non-SVR group, 7 of the 14 SVR patients and 32 of the 37 non-SVR patients had HCC recurrence after curative treatment for initial HCC. The 1-, 3-, and 5-year RFS in the SVR group were 100%, 82.0%, and 18.8%, respectively; the values in the non-SVR group were 91.9%, 24.7%, 5.3%, respectively. In contrast, overall survival after curative treatment of HCC was not significantly different between the SVR and non-SVR groups (P = 0.35). In accordance with these results, the first recurrence rate of 37 patients treated with RFA was lower in the SVR group (n = 10) than in the non-SVR group (n = 27) (P < 0.01) (Fig. 2B). To elucidate the prognostic relevance of clinical variables for recurrence, we performed univariate and multivariate analyses (Table 2). Multivariate analysis revealed that SVR at initial HCC treatment (P < 0.01) and multiple tumors (P < 0.01) showed a significant correlation with the first recurrence (Table 2). 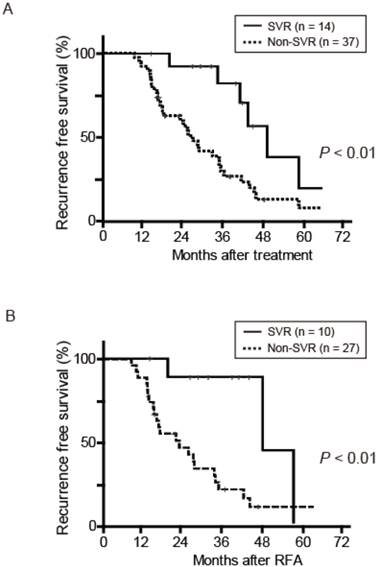 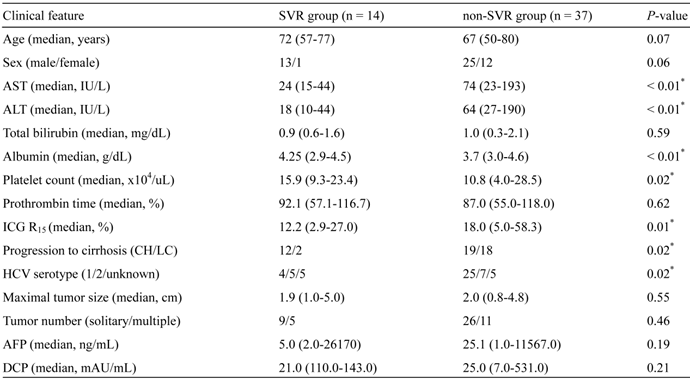 Risk factors for the first recurrence after curative HCC treatment. 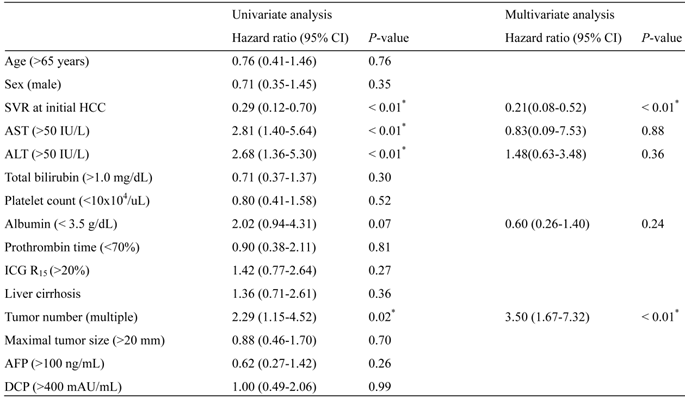 IFN-α has been used for the treatment for chronic HCV infection approximately 30 years [16]. The antiviral activity of IFN has been attributed to its ability to inhibit the expression of genes involved in viral replication [17]. IFN-α can also enhance the adaptive and innate immune responses of the host. On the other hand, IFN-α suppresses HCC development through the cessation of hepatic inflammation and regression of hepatic fibrosis. In addition, IFN-α enhances tumor necrosis factor (TNF)-induced apoptosis of tumor cells [18] as well as activation of TNF-related apoptosis-inducing ligand through promyelocytic leukemia protein induction [19] or death receptor 5 up-regulation and NF-κB inactivation [20]. We retrospectively analyzed HCV-related HCC patients with a history of previous IFN-based therapy. We aimed to elucidate the advantage of previous IFN-based therapy after curative treatment of HCC.

At first, we examined differences in characteristics between SVR patients and non-SVR patients. The SVR group had significantly lower levels of AST and ALT than non-SVR patients. This appears to be attributable to decreased liver inflammation after IFN-based therapy. The serum albumin level, platelet count, and ICG R15 were significantly higher in the SVR group than in the non-SVR group. The percentages of liver cirrhosis patients at initial treatment of HCC in the SVR and non-SVR groups were 14.2% and 48.6% (P = 0.02), respectively.

We then analyzed the first recurrence of HCC in SVR patients and non-SVR patients. SVR patients at the time of initial HCC treatment showed a significantly lower prevalence of recurrence than non-SVR patients (P < 0.01) (Fig. 2). Previous studies have demonstrated 3-year RFS to be 35.7%-56.7% [21] and 49.6%-61.1% [22]. Considering that 3-year RFS in the SVR group was > 80% in the present study, SVR before initial HCC treatment could contribute to the suppression of recurrence. SVR patients showed a more favorable prognosis than those without SVR in a study cohort of 69 HCV-related HCC patients undergoing hepatic resection [23]. Although RFA was performed in 37 of the 51 (72.5%) patients assessed in the present study, SVR patients among these 37 patients showed a lower recurrence rates than non-SVR patients (P < 0.01). With regard to the 7 SVR patients with recurrence after curative treatment, all showed normal values of AST and ALT, platelet count, serum albumin, and prothrombin time at the first recurrence. The median period to the first recurrence among these 7 SVR patients was 47.3 months, but the longest period was as long as 130.0 months. These results raise the possibility that some causes other than hepatic inflammation or fibrosis could induce HCC recurrence even after HCV is eradicated [24]. Taken together, SVR obtained during previous IFN-based therapy before the initial occurrence of HCC contributes to a favorable prognosis regardless of the treatment approach against HCC.

Although Miyatake et al. reported that overall survival rate at 5 years was significantly higher in SVR patients than in non-SVR patients [25], there was no significant difference between 2 groups in this study. This might be due to the fact that recent advances in diagnostic tools and treatment modalities have contributed to the improvement of survival in HCC patients.

Recently, it has been reported that combination therapy with direct-acting antiviral agents (DAAs), such as a nonstructural protein (NS) 3 inhibitor and a NS5A inhibitor without peg-IFN and ribavirin, was well tolerated and achieved a high prevalence of SVR [27, 28]. Ascertaining if these DAAs possess an inhibitory effect with regard to the occurrence and recurrence of HCC is important.

In conclusion, we analyzed the effect of IFN-based therapy on recurrence after curative treatment against HCC. This effect has been mainly analyzed in patients with surgical resection. Furthermore, there were only two studies investigating not only first recurrence but also second recurrence after curative treatment for initial HCC [25, 26]. In the present study, SVR patients who had received curative treatment, including local ablation therapy and hepatic resection, had a favorable outcome compared with non-SVR patients. The similar trend was also observed in patients treated with RFA. These results appeared to be concordant with the findings of previous reports. Further prospective studies are necessary to confirm the effect of IFN in a larger number of patients with respect to cancer prevention.