Objective: In the acute stage of infectious diseases such as pneumonia and sepsis, sequelae hypercytokinemia and cytokine storm are often observed simultaneously. During bacterial infections, activated polymorphonuclear leukocytes (PMNs) cause inflammation and organ dysfunction in severely ill patients. Gene expression of the triggering receptor on myeloid cells (TREM)-1 and G-coupled-protein receptor kinase (GRK)-2 in PMNs isolated from patients was analysed to identify genes correlated with the severity of pathophysiological conditions.

Methods: mRNA levels of TREM1 and GRK2 in the PMNs from 26 patients (13 with pneumonia, 5 with severe sepsis, and 8 with septic shock) were analysed by using quantitative real-time PCR. The synthesised soluble form (s)TREM-1 was incubated with normal PMNs to investigate its biological functions in vitro.

The World Health Organization (WHO) estimates that lower respiratory tract infections account for nearly 35% of all deaths from infectious diseases, causing an annual mortality of nearly 4 million adults and children. Thus, bacterial pneumonia is a significant cause of mortality worldwide [1].

Severe sepsis and septic shock are common among critically ill patients, with a reported incidence ranging from 50 to 300 cases per 100,000 people and mortality rates ranging from 25% to 70% when complicated by shock and multiple organ failure [2-5]. Furthermore, some infected individuals die from secondary infections during the phase of sepsis-associated immunosuppression (SAIS) [6].

In acute bacterial infections such as pneumonia and sepsis, PMNs are critical effector cells of the innate immune system, which protect the host by migrating to inflammatory sites and killing pathogenic microbes. PMN migration is regulated by signaling mechanisms activated by chemokines, which act on chemokine receptors in order to direct PMN migration along a concentration gradient [7].

Desensitization of chemokine receptors within the G protein-coupled receptor (GPCR) family is an important determinant of the intensity and duration of agonist stimulation [8]. Receptor desensitisation regulates not only the number of migrating PMNs, but also their motility and ability to stop upon contact with pathogens or target cells [8]. GPCR kinases (GRKs), specific kinases that interacting with GPCRs, induce receptor phosphorylation and thereby signal GPCR desensitization [9]. The chemokine macrophage inflammatory protein (MIP)-2 induces GRK2 expression in PMNs through the phosphoinositide-3-kinase (PI3K)-γ signaling pathway and lipopolysaccharide (LPS)-activated signaling through the Toll-like receptor (TLR)-4 pathway, which transcriptionally downregulates the expression of GRK-2 in response to MIP-2 [10]. TLR4 modulation of the expression of chemokine receptors on the surface of PMNs following the downregulation of GRK2 expression is a critical determinant of PMN migration.

Triggering receptor expressed on myeloid cells (TREM)-1 is a recently discovered member of the immunoglobulin (Ig) superfamily [11]. TREM-1 is an amplifier of the immune response, which strongly potentiates the activation of PMNs in response to microbial products [12]. Soluble TREM-1 (sTREM-1) levels in patients' plasma are superior indicators of sepsis compared to C-reactive protein (CRP) and procalcitonin (PCT) levels [13-16]. The function of TREM-1 and sTREM-1 is to modulate the inflammatory response during pneumonia and sepsis [17].

PMNs in peripheral blood constitute an accessible source of clinically relevant information, and gene expression profiling of these cells is an emerging strategy for diagnosing and monitoring infections. Elucidating the gene expression patterns of TREM1 and GRK2 in the PMNs of patients with bacterial infections has led to a better understanding of the underlying mechanisms of infectious diseases and responses to treatment.

Thirteen patients (12 males and 1 female) with pneumonia were followed-up using the criteria of The Japanese Respiratory Society [18]. The median age of patients with moderate cases was 60 years, and the median age of those with severe illness was 71 (Table 1). Thirteen patients (3 males and 10 females) with sepsis were followed-up by the definitions [19], and the median ages of patients with severe sepsis and septic shock were 72 years and 70 years, respectively (Table 1). All patients were hospitalised at the Teikyo University Hospital. The causative organisms were isolated from the sputum of pneumonia patients or whole blood of sepsis patients. All organisms were cultured and identified in the Clinical Laboratory Department of the hospital. The protocol was approved by the Ethical Review Committee at the Teikyo University School of Medicine (No. 07-104), and all participants gave written informed consent.

GNR, Gram-negative rod; GPC, Gram-positive coccal; and ND, not detected. The total number of patients was 23.

PMNs from patients and healthy volunteers were isolated from the peripheral blood [20]. Briefly, whole blood (20 mL) was mixed with 4.5% dextran solution, and the mixture was allowed to stand at room temperature for 40 minutes. The leukocyte-rich plasma was then centrifuged at 400g on a Ficoll-Paque Plus gradient (Amersham Bioscience, WI, USA) for 20 minutes. To lyse erythrocytes, a hypotonic (0.2%) saline solution was used. The osmolality of the mixture was then restored using a hypertonic (1.6%) saline solution. The PMNs were adjusted to a final concentration of 1 x 107 cells/mL in Hank's balanced salt solution (HBSS). All volunteers were healthy adults (10 males and 8 females) with ages ranging from 25 years to 58 years (mean age, 50 years).

Total RNA was extracted from the PMNs by using the RNeasy Plus Mini Kit (QIAGEN, Hilden, Germany) according to the manufacturer's instructions. The quantity and quality of total RNA samples were determined using the Agilent 2100 Bioanalyzer (Agilent Technologies, Waldbronn, Germany).

Total RNA was reverse transcribed to cDNA by using SuperScript VILO cDNA synthesis kit (Invitrogen Life Technologies, CA, USA). Briefly, 1 μg of total RNA was incubated with 2.5 μM oligo (dT)20, and 50 ng random hexamers, and 200 U SuperScript III RT enzyme in a 20-μL reaction volume at 42ºC for 60 minutes followed by 50ºC for 20 minutes. The reactions were terminated by heating at 85ºC for 5 minutes.

A segment of sTREM-1 (length 50 amino acid residues: #18-67) was synthesised by OPERON (Tokyo, Japan). The sequence was designed using a 3D software and is shown below: NH2-LRAATKLTEEKYELKEGKTLDVKCDYTLEKFASSQKAWQIIRDGEMPKTL-COOH. The synthesised sTREM-1 was incubated with normal PMNs at 37ºC for 1 hour. The reaction mixture contained 0.2% (v/v) human serum (final concentration).

All P values were determined using nonparametric unpaired or paired t-tests (two-tailed) in Excel 2011 (Microsoft Corporation, Tokyo, Japan). We considered P < .05 to be significant, and the degree of significance was indicated as follows: **, P < .01.

Expression analysis of the G-protein-coupled receptor kinase GRK2 (Fig. 1 and Table 3a)

The gene expression levels of GRK2 in PMNs were downregulated in all patients with acute bacterial infections such as pneumonia and sepsis (Table 3a). The following average fold-changes were observed in patients (Fig. 1): moderate pneumonia, 0.36; severe pneumonia, 0.28; severe sepsis, 0.20; and septic shock, 0.30.

Expression analysis of the triggering receptor TREM1 (Fig. 2 and Table 3a)

Fold-changes of mRNA expression levels of TREM1 and GRK2 in infected patients. 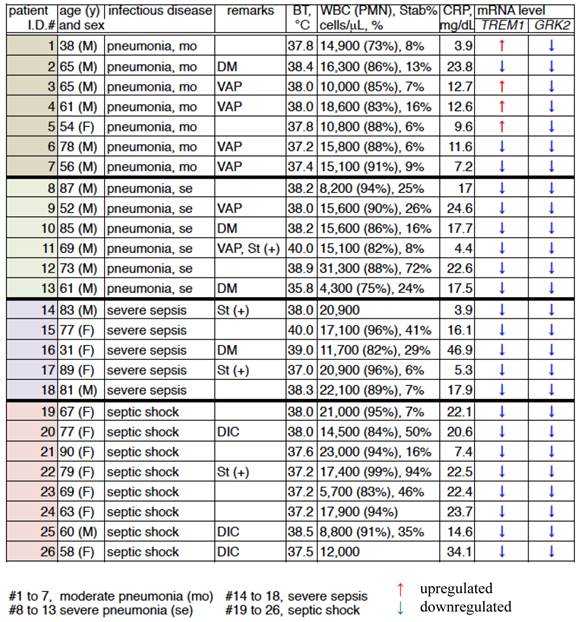 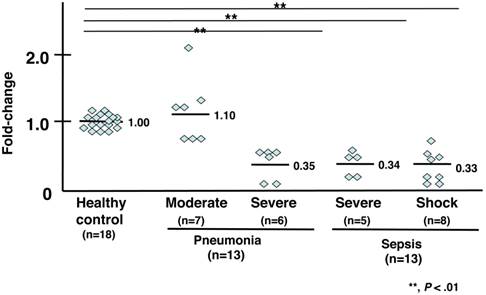 Comparison of the TREM1 mRNA levels in the PMNs of patients in between the acute and convalescent stages of bacterial infection. 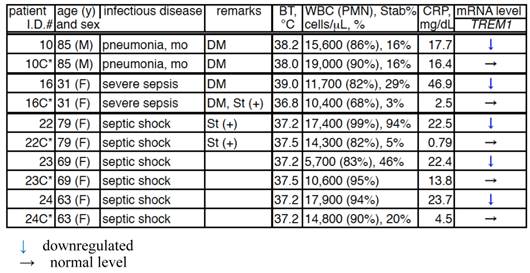 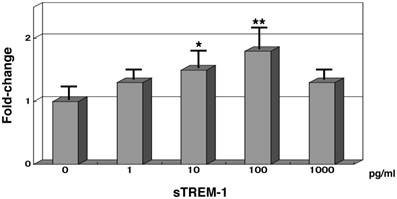 Among phagocytes, PMNs are remarkable for their migratory capacity. Upon activation by chemoattractants, chemokines, or inflammatory products, PMNs rapidly migrate to sites of infection [22]. Pathogen-associated molecular patterns (PAMPs) are recognised as molecular signatures by pattern recognition receptors (PRRs) that are predominantly expressed on PMN surface [23].

The findings of GRK2 gene expression analysis did not correlate with the body temperature (BT), white blood cell (WBC) count, C-reactive protein (CRP) level, age, and gender of patients. The mRNA levels of GRK2 were downregulated in the PMNs of all patients with bacterial infections, indicating that PMN migration was suppressed. Indeed, the ability of PMN migration of our patients with severe infections was inhibited (data not shown). In our previous gene expression analysis of PMNs from patients with acute bacterial infections, 7 immunomodulated genes (i.e., TLR2, TLR4, CD14, TNFA, IL6, IL8Rs, and MAC-1) did not correlate with the conditions of 23 infected patients [21].

However, the inverse correlation of TREM1 mRNA levels with the severity of pathophysiological conditions of acute bacterial infections was overlooked. Protein expression of TREM-1 is also upregulated in phagocytic cells in the presence of pathogens, and sTREM-1 is released into circulating blood during infection [24].

The serum levels of CRP and PCT are used as markers for inflammatory and infectious diseases worldwide. These data are easy and convenient to measure because of the quantity of protein available in the serum of patients during routine work [25]. However, the mRNA levels of TREM1 in patients with acute bacterial infections are more specific for their pathophysiological conditions and even require total RNA extraction and cDNA synthesis. Recently, these steps have become quick and easy with the use of automatic equipment [26]. The mRNA expression levels of TREM1 in circulating PMNs may reflect the severity of a bacterial infection.

The full-length of sTREM-1 has been reported to amplify inflammation in animals [27]. Soluble TREM-1 may be a key factor that exacerbates acute infectious disorders because blocking TREM-1 signaling with a sTREM-1-IgG fusion protein has reduced hyperinflammatory responses and death in animal models [28].

The relevance of our findings is limited to PMNs, and the interactions between the alteration of TREM1 gene expression and protein synthesis have not been fully elucidated. Furthermore, it is unclear whether similar changes occur in other leukocyte subtypes (eg, lymphocytes, monocytes, M1 and M2 macrophages). Future studies on these cell types are required if we are to gain a more complete understanding of the host response to bacterial infections.

We thank our patients for agreeing to participate in this study. We are also grateful to Ms. C. Miyazaki for her technical assistance.

Financial support for this study was provided by a grant-in-aid from the Ministry of Education, Culture, Sports, Science and Technology of Japan (21591300).

24. Gibot S, Cravoisy A. Soluble form of the triggering receptor expressed on myeloid cells-1 as a marker of microbial infection. Clin Med & Res. 2004;2:181-7