Liver cancer is the fifth most common cancer for men and the seventh for women worldwide [1]. Hepatocellular carcinoma (HCC) represents the major histological subtype and accounts for 70% to 85% of liver cancers worldwide [2]. Accumulating evidences showed that the incidence of HCC was still rising and 5-years survival of HCC was as low as about 0%-10% [3]. Until now, the screening and surveillance for HCC mainly depend on serum level of alpha fetoprotein (AFP) and ultrasonography. However, several studies showed that the determination of serum AFP level lack adequate sensitivity and specificity for effective diagnosis and surveillance of HCC [4, 5]. The performance of ultrasonography was influenced by many factors including experience of the examiner, the technology used, the body habitus, the presence of cirrhosis and the size of the tumor [6]. Therefore, new biomarkers for the surveillance and early detection of HCC are urgently needed.

DNA methylation is one of the most common epigenetic mechanisms, which donates the addition of a methyl group to DNA to regulate the expressions of its downstream targeted genes. It is widely spread in human genome and usually occurs at cytosine adjacent to guanine (CpG dinucleotides) [7]. Aberrant DNA methylation of several cancer related genes occurred in most of human malignancy [8, 9]. DNA methylation can be detected in free-floating DNA from dead cancer cells in bodily fluids and can provide novel potential biomarkers for the early diagnosis of human cancers including HCC [10]. Our previous study demonstrated that TFPI2 methylation in serum might be used as a predictor of HCC progression [11]. In recent years, several genes including GSTP1, RASSF1A, APC, and P16 were also found to be aberrantly methylated in serum or tissue of HCC patients and may potentially be used as biomarkers [12-14].

G-protein-coupled bile acid receptor Gpbar1 (TGR5) is a membrane-bound receptor for bile acids and is well known for its role in regulating energy homeostasis, bile acid homeostasis, as well as glucose metabolism [15-17]. TGR5 has been reported to regulate hepatic inflammatory response through antagonizing nuclear factor kappa light-chain enhancer of activated B cells (NF-κB) in Mice [18]. A recent study demonstrated that TGR5 activation greatly inhibits proliferation and migration of human liver cancer cells in vitro and the deficiency of TGR5 enhances chemical-induced liver carcinogenesis [19]. These findings identified that TGR5 is a novel tumor suppressor gene and TGR5 might be an attractive therapeutic tool for liver cancer.

The human TGR5 promoter has not been definitely characterized up to date. In our present study, we recognize the region within 2000bp upstream of transcriptional start site as presumptive promoter region for TGR5 gene like several other studies [20, 21]. GeneBank indicates that 37 CpG sites located on TGR5 promoter sequence (Supplementary figure 1). Therefore, methylation of TGR5 gene promoter may occur in tumorigenesis and may be a potential biomarker for the diagnosis of tumor diseases in clinic. In our present study, we investigated promoter methylation of TGR5 gene in the serum of hepatitis B virus (HBV) infected patients with or without HCC and healthy blood donors. Then we evaluated aberrant promoter methylation of TGR5 gene in serum cfDNA as a biomarker for screening HCC from CHB.

160 HBV-infected patients with HCC, 88 CHB patients without HCC and 45 HCs were recruited from April 2012 to April 2013 in the Department of Hepatology, Qilu Hospital of Shandong University. HCC patients were diagnosed according to the 2010 update of the American Association for the Study of Liver Diseases (AASLD) Practice Guidelines for Management of hepatocellular carcinoma [22]. Chronic HBV infection was defined as a positive hepatitis B surface antigen (HBsAg) for at least 6 months prior to the beginning of this study [23]. Within all the 88 CHB patients, 33 were accompanied by cirrhosis. Exclusion criteria included co-infection with human immunodeficiency virus (HIV) or hepatitis C virus (HCV), alcoholic liver diseases, autoimmune liver diseases, non-alcoholic fatty liver diseases (NAFLD) and other causes of chronic liver diseases. All patients gave written informed consents under protocols approved by the local Research and Ethics Committee at Qilu Hospital of Shandong University, in accordance with the guidelines of the 1975 Declaration of Helsinki.

A minimum volume of 400 μL serum was obtained from every participant. Serum DNA was extracted by the QIAamp DNA Blood Mini Kit (Qiagen, Germany) according to the ''Protocol: DNA Purification from Blood or Body Fluids'' recommended by the manufacturer. DNA concentration was then determined by the Eppendorf Biophotometer (Brinkmann Instruments, Westbury, NY, USA). The extracted DNA was eluted in a total volume of 200μL sterile water and stored at -20 °C until sodium bisulfate modification.

DNA bisulfate modification was performed by EZ DNA Methylation-Gold KitTM (Zymo Research, USA) according to the manufacturer's instructions. A final volume of 20 μL modified DNA was obtained, and was either used immediately as a template for MSP or stored at -20 °C.

Methylated and unmethylated primers specific for TGR5 promoters were designed using MethPrimer according to the recommended criteria [24]. The reasons for choosing this area included: (i) the primers contained at least one CpG site at the most 3'-end; (ii) the primers in M pair and U pair contained the same CpG sites within their sequence; (iii) two sets of primers had similar product Tm values, which is 66.3oC for M pair and 66.0oC for U pair. Then the selected primer sets were used to amplify the bisulfite modified DNA in our study (Table 1). The M pair primers amplified -1958 to -1821 site of the 5'-UTR of the TGR5 gene (+1 for the transcriptional start site). Meanwhile, the U pair primers amplified -1955 to -1820 site of the 5'-UTR of the TGR5 gene (Supplementary figure 1). MSP was performed in a total volume of 25μL containing 1μL bisulfite-treated DNA, 0.5μL of each primer (10 μM), 10.5μL nuclease-free water, and 12.5μL Premix Taq (Zymo Research, USA), which consisted of Taq DNA polymerase, reaction buffer, and deoxynucleotide triphosphate mixture. The PCR protocol was composed of an initial denaturation at 95 °C for 10 min, followed by 45 cycles of denaturation at 95 °C for 30s, annealing at 56 °C for 40 s, and primer extension at 72 °C for 40 s; PCR cycles were followed by final extension at 72 °C for 10 min. Human DNA, treated in vitro with SssI methylase and bisulfate converted (Qiagen, Germany), was used as positive control. DNA from normal lymphocytes was used as negative control. Water bland without DNA was used as in each round of PCR. PCR products were then electrophoresed on a 2 % agarose gel, stained with ethidium bromide, and visualized under UV illumination. Each MSP was repeated for three times.

Quantitative variables were expressed as the median (centile 25; centile 75). Categorical variables were expressed as number (percentage). Statistical analyses of the data were performed with SPSS version 16.0 (Chicago, IL, USA). χ2 test or Fisher's exact test were used to compare the categorical variables. Spearman correlation coefficients were calculated to evaluate correlations between serum AFP and TGR5 methylation. A 2-tailed p value less than 0.05 was considered statistically significant.

Primers for MSP of the TGR5 gene 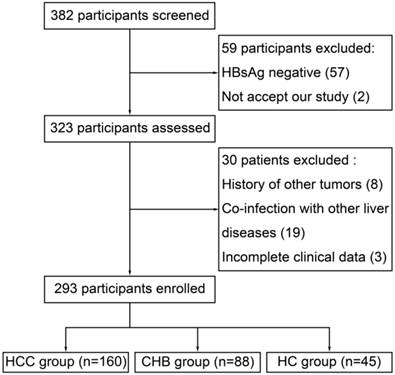 Characteristics of the enrolled participants at baseline 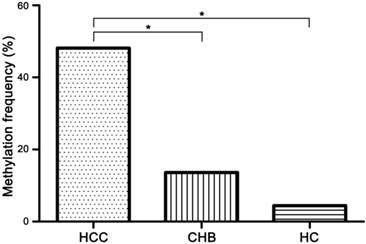 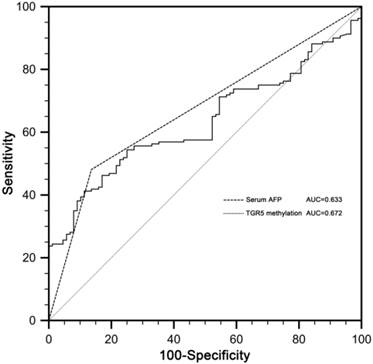 In our study, we investigated the serum DNA methylation for TGR5 gene promoter in 160 Patients with HCC, 88 patients with CHB and 45 HCs. Our result showed that the methylation frequency was significantly higher in HCC patients than CHB patients and HCs. The methylation rate of TGR5 in HCC patients ≥60 years old was significantly higher than those <60 years old (p<0.05). When combined with TGR5 methylation, the diagnostic value of AFP for discriminating HCC from CHB was improved at cut-off points of 20, 200 and 400ng/ml respectively.

Hepatocellular carcinoma (HCC) is one of the most common and rapidly fatal human malignancies. Most HCC are diagnosed at an advanced stage and died within one year of diagnosis due to the lack of effective surveillance alternatives [25]. Currently available surveillance tests mainly included AFP analysis and ultrasound. However, the effectiveness of them remains controversial [26]. Hypermethylation in promoter regions is now recognized as an important early event in carcinogenesis and detection of methylated DNA has been suggested as a potential biomarker for early detection of cancer. Until now, many genes including GSTP1, RASSF1A, APC, and P16 were found to be aberrantly methylated in serum or tissue of patients with HCC and may potentially be used as biomarkers [11-14].

TGR5, which is a membrane-bound receptor for bile acids, had been demonstrated to be involved in liver carcinogenesis. Our study for the first time revealed that TGR5 promoter aberrant hypermethylation existed in the serum of HCC patients. 77 of 160 (48.13%) HCC patients exhibited aberrant TGR5 promoter methylation in our study, which was significantly higher than CHB patients (12/88, 13.64%) and HCs (2/45, 4.44%). This finding implied that the methylated TGR5 gene in serum may serve as a new biomarker for the surveillance of HCC.

Our study found that the TGR5 hypermethylation was more frequently observed in HCCs patients ≥60yr (χ2=5.51, p=0.019) than those <60yr, which is consistent with several other studies. Xin Li et al. showed that hypermethylation of the p16INK4A-promoter region was more frequent in HCCs from older patients [27]. Ahuja N et al. determined the frequency of age-related methylation in normal colonic mucosa among the genes hypermethylated in colorectal cancer and suggested that aging is a major contributing factor to hypermethylation in cancer [28]. However, the study performed by Masahito Tsutsui et al. showed that methylation of CCND2 gene was not related to age [29]. It is possible that age-related methylation may be gene specific and tumor specific.

However, there are some limitations in this present study. First, we didn't analyze the methylation status and mRNA expression of TGR5 gene in HCC tissue or HCC cell lines. DNA methylation is one of the most important epigenetic mechanisms and methylation of gene promoter regions links to long-term stabilization of transcriptional silencing and loss of gene function [32-35]. Of great importance, increasing clinical evidences have shown that serum DNA methylation of some genes could be recognized as novel biomarkers for the diagnosis of human cancers including prostates cancers, gastric cancers, liver cancers and so on [36-39]. In the patients with hepatocellular carcinoma, we have previously demonstrated serum DNA methylation of tissue factor pathway inhibitor-2 promoter could be identified as a potential biomarker for HCC [11]. In our present study, we therefore mainly intended to find the possible diagnostic value of TGR5 promoter methylation as a novel biomarker for HCC patients. Obtained results suggested combination of serum TGR5 promoter methylation and AFP might enhance the diagnostic value of AFP alone in discriminating HCC from CHB patients. However, we believe that these results should be carefully explained in multiple aspects especially in the mechanism manner of biological function analysis for TGR5 promoter methylation. Experimental evidences using liver tissue and HCC cell lines should be done in our further study to demonstrate the exact function of TGR5 promoter methylation on the regulation of TGR5 expression and the possible role of TGR5 promoter methylation in the development of HCC. Second, we did not confirm our study in a second cohort. The validation test of our finding using second cohort and well-matched cohort should be performed in our further research. Third, we only enrolled HBV-infected HCC patients and revealed that the combination of serum TGR5 promoter methylation and AFP enhanced the diagnostic value of AFP alone in discriminating HCC from CHB patients. However, the “tumor suppressor” effect of Gpbar1 should not be restricted in HBV infected HCC patients and there are also some other kinds HCC patients with different causes including HCV and alcoholism. Therefore, we believed that the other HCC patients with HCC and alcoholism should be performed in our further research

In conclusion, our study demonstrated that the aberrant hypermethylation of TGR5 promoter in serum cfDNA might serve as a biomarker for the surveillance of HCC. TGR5 hypermethylation was significantly associated with aging. It could enhance the diagnostic value of AFP in discriminating HCC from CHB patients at cut-off points of 20, 200 and 400ng/mL respectively.

21. Li C, Chu N, Wang B. et al. Polymorphisms in the presumptive promoter region of the SLC2A9 gene are associated with gout in a Chinese male population. PLoS One. 2012;7:e24561