Conclusions: Spontaneous weight loss at 4 and 12 weeks of CHC therapy was associated with improved EVR. Weight loss at 4 weeks was an independent predictor of EVR but not SVR.

An estimated 3% of the world's population (170+ million persons) is infected with the hepatitis C virus (HCV) 1, 2. Of those infected, 20% to 50% will develop cirrhosis and its related complications 3. The recent addition of protease inhibitors has significantly improved the response rate to hepatitis C therapy 4,5. However, combination treatment with pegylated IFN alpha and Ribavirin remains a critical element in new treatment regimens 6 and identifying the predictors of viral response may be important in order to optimize triple combination therapy 7-9.

Early predictors of treatment response before or early after start of therapy have the best chance of impacting treatment decisions. In this report, we examined the extent of weight change during the first 12 weeks of PEG-IFN + Ribavirin hepatitis C therapy and its relation to virologic response.

A retrospective review of electronic medical records of treatment-naïve hepatitis C patients with chronic hepatitis C confirmed by HCV-RNA referred between 2001 and 2009 for hepatitis C management to a single tertiary center was conducted. The study was approved by the Institutional Review Board (IRB).

In order to evaluate the effect of early weight loss on HCV therapy, patients were categorized into two weight loss groups (WL; those whose BMI decreased by 0.5 or more kg/m2 from pre-treatment BMI) and non-weight loss group (NWL; those whose BMI decreased less than 0.5 kg/m2, didn't change or increased). The cutoff point of 0.5 BMI was chosen as it represented the median loss in BMI at 4 weeks for the whole study group. Body mass index (BMI) was calculated as weight in kg divided by square meter of the height (kg/m2). Overweight or obesity was defined as BMI ≥ 25 or ≥ 30, respectively, for both men and women. Subjects were considered to have metabolic syndrome if they were obese (BMI ≥ 30 kg/m2) in addition to 2 or more of the following disorders: dyslipidemia, systemic hypertension, and diabetes.

Data analyzed included sex, race, liver steatosis type (micro, macro and mixed steatosis), presence of liver steatosis (fat globules involving more than 5% of liver parenchyma), percentage of liver parenchyma with steatosis, HCV genotype, peg-IFN type (α2a or α2b), virologic response rates by PCR, age, weight and BMI pre-treatment and at 1, 3, 6 and 48 weeks of therapy, treatment duration, pretreatment HCV RNA, liver fibrosis grade and pre-treatment ALT and AST. Cases with a history of alcohol or drug abuse, other etiologies of chronic liver disease or viral co-infection with hepatitis B or HIV were excluded. Pre-treatment data were used if they were within 3 months preceding the initiation of treatment. Post-treatment variables were taken at exact time ± 1 month.

Hepatitis C therapy consisted of peg-IFN-α2a at a dosage of 180 µg/week or 1.5 µg /kg/week for peg-IFN-α2b in combination with Ribavirin at a weight-based daily oral dose of 800 mg for <65 kg, 1000 mg for >65-85 kg, 1200 mg for >85-105 and 1400 mg for >105 kg body weight. Treatment doses were adjusted as clinically indicated.5 The completion of the HCV therapy course was defined as 80% or more of the IFN and Ribavirin doses. Rapid virologic response (RVR) was defined as an undetectable serum HCV RNA at 4 weeks. Early virologic response (EVR) was defined as ≥ 2 log drop of HCV RNA at 12 weeks of anti HCV therapy in relation to pretreatment RNA. Patients with undetectable virus at the end of treatment and again 24 weeks after completion of treatment were considered to have achieved a sustained virologic response (SVR).

Data analysis was completed using SPSS for Windows, version 17 (SPSS Inc. Chicago, IL). Descriptive statistics are presented as mean ± standard deviation for quantitative variables and as percentages for qualitative variables. Intent to treat analysis was used where data of all patients who received at least one dose of hepatitis C therapy was included in the analysis. The categorical variables were compared with Pearson's Chi-squared test or Fisher's Exact test as appropriate and, the continuous variables were compared with student t-test or Mann Whitney test according to the distribution type of data. In order to determine independent predictors of HCV response, factors significantly associated with virologic responses by univariate analysis were included in multivariate logistic regression model. Statistical significance was set at p value of 0.05 (two-tailed).

Between 2001 and 2009, 438 patients with chronic hepatitis C were referred to our center and consented to release their information for research purposes (Figure 1). Data were missing in 73 patients; 256 were treatment-naïve, of whom 184 cases (72 %) underwent treatment for Hepatitis C and were included in the study population. Hepatitis C therapy was not considered in 72 (16%) out of 438 patients. The decision not to start treatment was not affected by pre-treatment weight or BMI. The percentage of patients who were not treated was 31.9% and 27.8% for normal pre-treatment weight (BMI < 25) and overweight/obese (BMI ≥25) subjects, respectively, p = 0.52. The most common causes of non-treatment were, uncontrolled or active psychiatric disorders (n=12), alcohol abuse (n=11), decompensated liver disease (n=8), and refusal to receive current therapy or preferring to wait for a new regimen (n=7). Decompensated liver disease was a significantly more common cause for non-treatment among patients with BMI ≥ 25 kg/m2 versus those with BMI < 25 (p = 0.04). Other causes for non-treatment were not different among the various BMI groups. Out of 184 treatment naïve subjects, treatment was discontinued in 37 (20.1%) cases due to lack of tolerance and adverse effects associated with the therapy. The most common of these were psychiatric disorders (n=15, 8%), blood cytopenia (n=10, 9%), fatigue and eye disorders (n=8, 4%). There was no difference in the percentage of patients completing 80% or more of therapy among normal weight and overweight groups (80% and 78.9%, respectively, p = 0.9). 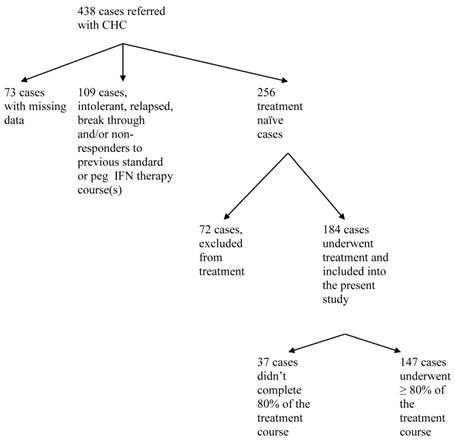 Weight change compared to pre-treatment weight was compared between patient with HCV genotype 1 with and without positive RVR, EVR and SVR (Table 5). Patients who achieved EVR lost significantly more weight at 4 and 12 weeks of therapy compared with those without EVR. Weight changes at 4, 12, and 48 weeks of therapy were not significantly different between those with or without RVR or SVR (Table 5). Virologic response rates were also compared between subjects with or without weight loss (>0.5 BMI) at 4 and 12 weeks of HCV therapy (Table 6). For hepatitis C genotype 1, WL group at 4 weeks was associated with significantly higher EVR versus NWL group (Table 6). The differences in RVR and SVR did not reach statistical significance (p = 0.08). The WL group at 12 weeks of therapy also had significantly higher EVR compared to NWL group (Table 6). There was no significant difference in SVR between WL and NWL at 12 weeks.

Baseline demographic and clinical characteristics of 184 treatment-naïve patients who underwent treatment for chronic hepatitis C and were included in the study.

All comparisons are made with respect to pre-treatment

Weight changes from pre-treatment weight among subjects with chronic HCV Gen 1 with and without virologic response to HCV therapy with PEG-interferon + Ribavirin.

Virologic response rates in patients with HCV Genotype 1 with, versus those without, weight loss (BMI decrease by 0.5 or more kg/m2 from baseline pre-treatment BMI) at 4 and 12 weeks of PEG-IFN/Ribavirin therapy.

Several studies have demonstrated that weight loss observed during hepatitis C Interferon based therapy is associated with response to therapy 13-15. Chung et al demonstrated a relation between maximum weight loss during therapy and treatment response (SVR, Relapse or breakthrough) versus non-responders. However, there was no weight loss between those with or without SVR13. On the other hand, Suwantarat et al demonstrated that weight loss of more than 5 kg at end of treatment was an independent predictor of SVR14. The timing of weight loss during HCV therapy and the relationship between early weight changes during the first 12 weeks of therapy and rapid and early virologic responses may be most valuable in optimizing treatment decisions. In addition, rapid and early virologic responses at 4 and 12 weeks of therapy are of great significance in predicting SVR 4,5,10-12 and determining the length of therapy in triple combination therapy4,5. The main objective of this study was to evaluate the relationship of spontaneous weight loss at different times of PEG-IFN plus Ribavirin therapy on treatment response.

In our study, overweight subjects at the start of therapy lost significantly more weight compared to subjects with normal weight. A similar observation was previously reported although not with statistical significance18. Our data indicate that among patients with HCV genotype 1, spontaneous weight loss of ≥ 0.5 kg/m2 at 4 and 12 weeks of PEG-IFN + Ribavirin therapy was associated with significantly higher EVR. In addition, after adjusting for other factors associated with EVR, weight loss at 4 weeks continued to be an independent predictor of achieving a positive EVR. Although not statistically significant, patients with weight loss at 4 weeks tended to have higher RVR and SVR versus patients without such weight loss. The mechanism of weight loss in PEG IFN + Ribavirin therapy is not well established. Loss of appetite and nausea are commonly encountered during HCV therapy. Changes in insulin, leptin and proinflammatory cytokines have been implicated18. Fioravante et al demonstrated that the weight loss during treatment was accompanied by a significant decrease in energy intake as assessed by 24-h recall. However, there was no change in resting energy expenditure19.

Several studies have shown obesity as a risk factor for non-response to IFN- based hepatitis C treatment. Obesity as indicated by body weight above 75 kg 7, body surface area above 2 meter square 17, and BMI ≥ 30 (kg/m2), 20,21 was an independent predictor of non-response to IFN- based HCV therapy. In our study, patients with normal pre-treatment BMI tended to have higher EVR and RVR compared to those with overweight or obesity with BMI ≥ 25 although these differences were not statistically significant. Other studies did not demonstrate a relationship between pre-treatment BMI and virologic response. For example, Zeuzem et al reported a negative effect of obesity as defined by surface area but not by weight or BMI 17.

Our study is limited by its retrospective design. Most of our patients were Caucasians (79%) with African Americans constituting only 10%. This may partially explain the higher rate of RVR and EVR in our study compared to previously reported rates.

This study was supported by educational grant funded by the Egyptian ministry of the higher education.