Objective The adiponectin gene (ADIPOQ) has been suggested to be associated with the pathogenesis of colorectal cancer (CRC). However, the results have been inconsistent. In this study, we performed a meta-analysis to investigate the association between adiponectin polymorphisms and CRC risk.

Methods All eligible case-control studies published up to March 2013 were identified by searching PubMed, Web of Science and CNKI. Effect sizes of odds ratio (OR) and 95% confidence interval (95% CI) were calculated by using a fixed- or random-effect model.

Colorectal cancer (CRC) is one of the most common gastrointestinal tumors worldwide [1]. Epidemiological studies have demonstrated that some risk factors and interactions between genetic and environmental factors may play important roles in the pathogenesis of that cancer [2,3].

Adiponectin is an adipose tissue-specific cytokine, which plays an important role in the regulation of insulin sensitivity, glucose homeostasis and lipid metabolism [4]. The decreases of plasma adiponectin levels are associated with obesity, type 2 diabetes, and coronary artery disease [5]. In addition, reduced adiponectin levels are also observed in CRC patients, suggesting the role of adiponectin in the pathogenesis of CRC [6]. The ADIPOQ gene (also known as AMP1 gene) coding for adiponectin, is located on chromosome 3q27, consists of 3 exons and two introns. Several studies have investigated the association between single nucleotide polymorphisms (SNPs) in the ADIPOQ gene and CRC risk in diverse populations. Of those SNPs, five were most commonly studied ones: rs1501299 (+276 G>T in intron 2), rs2241766 (+45T>G in exon 2), rs266729 (-11365 C>G in 5' flanking), rs822495 (-4034 A>C in intron 1), rs822396 (-3964 A>G in intron 1). However, the results have been inconsistent [7-15].

In this study, we performed a meta-analysis to clarify the associations of the five polymorphisms in the ADIPOQ gene with CRC susceptibility in diverse populations.

A literature research was conducted using PubMed, Web of Science and CNKI up to March 2013 without language restrictions. Relevant studies were identified using the terms: “adiponectin or ADIPOQ or APM1” AND “genetic polymorphism or polymorphisms or variant” AND “colorectal cancer or carcinoma”. The search was restricted to humans. Additional studies were identified by a hand search of references of original or review articles on this topic. If data or data subsets were published in more than one article, only the publication with the largest sample size was included.

Studies were included if they met the following criteria: (1) studies that evaluated the association between the adiponectin polymorphisms and colorectal cancer, (2) in a case-control study design, (3) had detailed genotype frequency of cases and controls or could be calculated from the article text. While major exclusion criteria were: (1) case-only study, case reports, and review articles, (2) studies without the raw data of the adiponectin genotype, (3) repetitive publications.

The two investigators (Ye CC and Wang J) independently extracted data and reached consensus on all of the items. If the two investigators generated different results, they would check the data again and have a discussion to come to an agreement. If they could not reach an agreement, an expert (Tan SY) was invited to the discussion. Data extracted from the selected articles included the first author's name, year of publication, country of origin, ethnicity of study population, number of cases and controls, and HWE in controls (P value). Different ethnicity was categorized as Asian, Caucasian, and African-American.

The qualities of eligible studies were assessed by using Newcastle-Ottawa Scale (NOS), which is widely used for assessment of the quality of observational study including cohort or case-control study[16]. NOS, consisting of three parts (selection, comparability and exposure), is a star-rewarded scale. A total of four, two, and three stars, respectively, will be rewarded if the criteria are met. The study with more than seven stars (≧7 stars) was categorized as high quality; otherwise, the study was categorized as low quality.

Meta-analysis was performed using the Cochrane Collaboration RevMan 5.0 (Copenhagen, 2008) and STATA package version 12.0 (Stata Corporation, College Station, Texas). The risk of CRC associated with the five polymorphisms of the adiponectin gene was estimated for each study by odds ratio (OR) and 95% confidence interval (95%CI). A χ2-test-based Q statistic test was performed to assess the between-study heterogeneity [17]. We also quantified the effect of heterogeneity by I2 test. When a significant Q test (P≤ 0.05) or I2 >50% indicated heterogeneity across studies, the random effects model was used [18], or else the fixed effects model was used [19]. Before the effect estimation of adiponectin polymorphisms in colorectal cancer, we tested whether genotype frequencies of controls were in HWE using χ2 test. We first estimated the risks of the heterozygote and variant homozygote compared with the wild-type homozygote, respectively, and then evaluated the risks of the combined variant homozygote and heterozygote versus the wild-type homozygote, and the variant homozygote versus the combined heterozygote and wild-type homozygote, assuming dominant and recessive effects of the variant allele, respectively. We performed stratification analyses on ethnicity. Analysis of sensitivity was performed to evaluate the stability of the results. Finally, potential publication bias was investigated using Begg' funnel plot and Egger's regression test [20,21]. P < 0.05 was regarded as statistically significant. 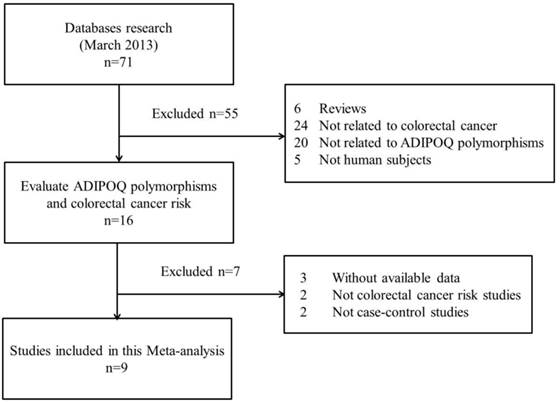 Characteristics of studies included in the meta-analysis.

Summary of OR of the ADIPOQ polymorphisms and CRC risk.

For rs822395A/C polymorphism, only three studies with 1221 cases and 1579 controls were identified. The results showed that no significant association was found both in overall and subgroup analysis (Table 2).

For rs822396A/G polymorphism, only three studies with 1222 cases and 1575 controls were identified. The results also suggested that there was no significant association between them both in overall and subgroup analysis (Table 2). 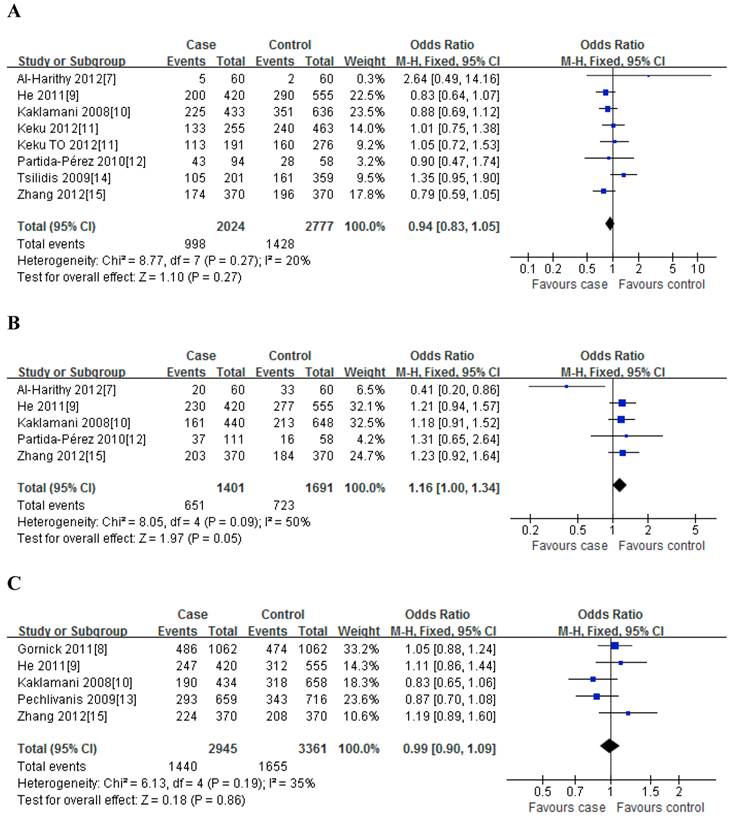 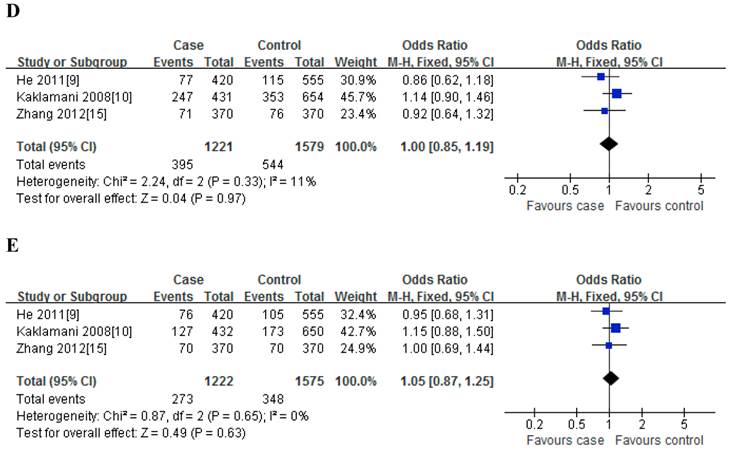 Meta-analysis of the association between rs2241766 polymorphism and susceptibility to colorectal cancer (TG vs. TT).

Sensitivity analysis, after removing one study at a time, was performed to evaluate the stability of the results. For rs2241766T/G polymorphism, when excluded the study by Al-Harithy et al[7], the heterogeneity disappears; for the other four polymorphisms, when successively excluded one study, the estimated pooled odd ratio still did not change at all, indicating that our results were statistically robust (data not shown). 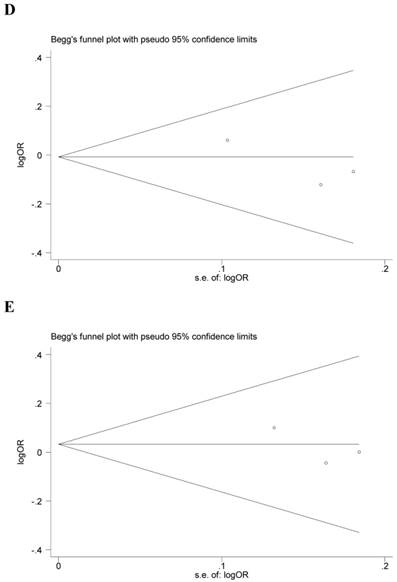 Heterogeneity between studies is very common in the meta-analysis of genetic association studies [23]. In this study, heterogeneity was found under dominant model in rs2241766T/G polymorphism, however, stratified by ethnicity, heterogeneity still existed in Asian population, Then sensitivity analyses were conducted by successively excluding one study, for rs2241766T/G polymorphism, when excluded the study by Al-Harithy et al, the heterogeneity disappears; it suggests that the particular study may be the source of heterogeneity. But, for the other four polymorphisms, the estimated pooled odd ratio changed quite little, strengthening the results from this meta-analysis. No publication bias was shown suggesting this possible true result.

Some limitations of this meta-analysis should be addressed. First, because of incomplete raw data or publication limitations, some relevant studies could not be included in our analysis. Second, the number of published studies, especially for rs822395A/C and rs822395A/C polymorphism was not sufficiently large for a comprehensive analysis, and some studies with small size (such as the study by Al-Harithy et al) may not have enough statistical power to explore the real association. Third, our results were based on unadjusted estimates, while lacking of the information for the date analysis may cause serious confounding bias. In spite of these limitations, our meta-analysis had several advantages. First, substantial number of cases and controls were pooled from different studies, which significantly increased statistical power of the analysis. Second, the quality of case-control studies included in current meta-analysis was satisfactory and met our inclusion criterion. Third, we did not detect any publication bias indicating that the whole pooled result should be unbiased.

In summary, this meta-analysis suggesting that adiponectin rs2241766T/G rather than rs1501299G/T, rs266729C/G, rs822395A/C and rs822396A/G polymorphism was associated with risk of colorectal cancer development. However, large and well-designed studies are warranted to validate our findings.

9. He B, Pan Y, Zhang Y. et al. Effects of genetic variations in the adiponectin pathway genes on the risk of colorectal cancer in the Chinese population. BMC Med Genet. 2011;12:94

16. Stang A. Critical evaluation of the Newcastle-Ottawa scale for the assessment of the quality of nonrandomized studies in meta-analyses. Eur J Epidemiol. 2010;25:603-5