Objective: Transnasal endoscopy may be used to observe the head and neck part readily without excessive reflexes. We aimed to evaluate the utility and stability of transnasal esophagogastroduodenoscopy (TN-EGD) in comparison with transoral EGD (TO-EGD) for observation of the pharynx.

Methods: A total of 497 patients received unsedated TN-EGD with a 5.5 mm diameter endoscope or unsedated TO-EGD with endoscopes of 6.5 mm, 7.9 mm and 9.2 mm diameter. The rate of completion of pharyngeal observation and numbers of gag reflexes and cough reflexes were recorded.

Results: TN-EGD was performed in 175 patients and TO-EGD was performed in 322 patients. Pharyngeal observation was completed in 173 patients (98.9%) in the TN-EGD group and 235 patients (73.2%) in the TO-EGD group, a significant difference (p<0.001). The TN-EGD group had a low rate of occurrence of gag reflex (0.57%), in contrast, 28.3% of the TO-EGD group had a gag reflex, a significant difference (p<0.01). Multivariable analyses revealed that the use of TN-EGD was the only predictive factor for completion of pharyngeal observation (p<0.0001).

Conclusions: TN-EGD is ideally suited to observation of the pharynx by unsedated EGD.

The number of esophagogastroduodenoscopy (EGD) procedure is increasing. Most such procedures are performed to examine the esophagus, stomach, and duodenum and, although the pharynx can also be observed, most physicians do not take the time to examine the pharynx. However, head and neck squamous cell carcinomas (SCCs), especially in the hypopharynx, usually are diagnosed at an advanced stage resulting in a poor prognosis.

Two aspects of endoscopy have been developing. One is obtaining a precise diagnosis of the lesion by magnifying endoscopy and image enhancement endoscopy (IEE). The other is reduction of the patient's discomfort during the examination. Sadative agents are used widely during transoral EGD (TO-EGD) to reduce the patient's discomfort from excessive reflex and anxiety, however, sedation itself has a cardiopulmonary complication and increases the time and operation of pre- and post-procedures, as well as the cost. Previous studies reported that the route of endoscopy is an important factor affecting the discomfort of endoscopy [1], that is, this may be reduced by transnasal EGD (TN-EGD), rather than TO-EGD.

We aimed, therefore, to evaluate the feasibility of TN-EGD, in comparison with TO-EGD, using three different diameter endoscopes for pharyngeal observation in an outpatient-based prospective group.

Patients and Esophagogastroduodenoscopy — This study involved patients who came to Chiba university hospital, Kazusa Academia Clinic, Chiba or Chiba Social Insurance Hospital for health screening and were referred for diagnostic EGD from September 2009 to November 2011. Written consent for EGD was obtained before the examination. Patients were excluded from this study when they wished to receive sedation or had a history of undergoing sedated endoscopy. Patients in the TN-EGD group received nasal anesthesia by spraying a solution of 0.4% lidocaine and 0.118% tramazoline into the nostril. Patients in the TO-EGD group received throat anesthesia through 5 ml of 2% lidocaine viscous for 5 min. All EGD were performed with the patient in the left lateral recumbent position and sniffing head position. Examinations were performed by three experienced endoscopists who carried out both TO-EGD and TN-EGD.

This study was reviewed and approved by the institutional review board of Chiba University School of Medicine. Informed consent was obtained from all patients.

Evaluation Criteria — In this study, we evaluated following three criteria: (1) rates of completion of pharyngeal observation, (2) numbers of gag and cough reflexes and (3) observation time in the cases where the pharynx was examined completely.

Statistical Analysis — The baseline data are presented as mean ± SD. Differences in the values of clinical parameters between the two groups were analyzed by the unpaired t test and Chi-square test. Logistic regression analysis was used for statistical analyses, as appropriate, with the statistical program PASW statistics 18 (SPSS Inc., Chicago, IL, USA); a p value of less than 0.05 was considered statistically significant.

Transnasal and Transoral Esophagogastroduodenoscopy — This study comprised included 497 patients (346 men and 151 women). TN-EGD was performed on 175 patients and TO-EGD was performed on 322 patients (Table 1a, Table 1b). There was no adverse event and insertion into the esophagus was successful for all patients in both groups. No case of epistaxis was documented in this study. No neoplasia was detected in either group.

Clinical Backgrounds of the Patients. 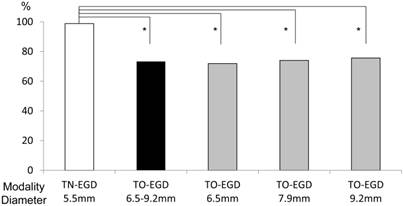 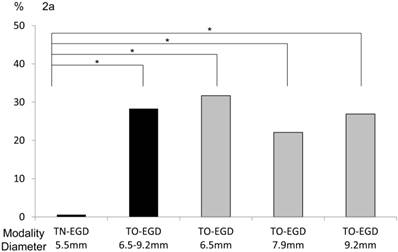 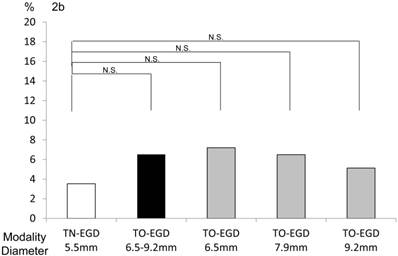 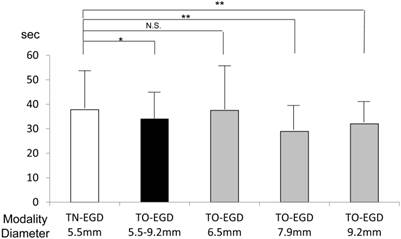 Comparison of the characteristics of the complete and incomplete groups for examination of the pharynx.

Analysis of the predictive factors for complete observation of the pharynx.

* Elderly was defined as over 53 years old which was the average of the patients. CI, confidence interval.

Analysis of factors for long observation in the accomplished group.

* Elderly was defined as over 53 years old which was the average of the patients. CI, confidence interval.

Unsedated TN-EGD is considered to be an attractive alternative to conventional sedated TO-EGD because it can reduce patient discomfort and cost, avoid the cardiopulmonary complications associated with sedation, and make unnecessary a period of recovery. After examination, patients can drive a car or return to work[2,3]. Generally, TN-EGD can be accomplished without a severe gag reflex. We carried out this study to test the hypothesis that TN-EGD may enable adequate examination of the pharynx. This study had the limitations of a non-randomized, non-crossover design and various factors, such as anesthetic delivery, insertion route, diameter of the endoscopes, and variation in the skills of endoscopists could impact on the outcome. In that sense, further randomized and crossover studies are needed.

Some studies have reported that the use of a transoral, small-caliber endoscope without sedation leads to a reduction of patient discomfort during EGD[4-6] and that unsedated TN-EGD also produces less discomfort than conventional TO-EGD[7-9]. In addition, other studies have reported that TN-EGD is more tolerable than small-caliber EGD[10-12]. Some studies reported that the diameter of the endoscope was an important factor in patients' discomfort[6,13] but others have suggested that the route was the determining factor [1]. Our study showed that the difference in endoscope diameter for TO-EGD was not a determining factor for the occurrence of the gag reflex, and that the route was the only determining factor. This is because the tongue base is contacted and compressed during TO-EGD but the instrument does not contact the tongue base during TN-EGD, which results in less gag reflex[1]. A serious limitation of our study is that the number of transoral and transnasal EGDs performed differ because it was exploratory in nature and we did not determine the numbers of patients for each procedure in advance using a statistical approach.

Several reports have addressed the feasibility of TN-EGD for the head and neck oncology patients [14,15] but no other study has documented the utility of TN-EGD for observation of the pharynx by comparing it TO-EGD. In this study, we report for the first time that TN-EGD achieved a higher rate of completion of examination of the pharynx than TO-EGD, with statistical significance. Univariable and multivariable analyses of predictive factors for successful pharyngeal observation were performed. The univariable analysis revealed that age and TN-EGD were predicting factors. This result is consistent with our impression that elderly people tend to have less reflex than younger people. The multivariable analysis showed that TN-EGD was the only predictive factor for successful pharyngeal observation. Although we expected that the patients who had experienced previous EGD would show less reflex than inexperienced patients, previous experience of EGD was not a significant factor. These results suggest that TN-EGD could be used for safe and complete examination of the pharynx.

In this study, the average time for pharyngeal examination in the successful TN-EGD group was significantly longer than that for the successful TO-EGD group. This result suggests that TN-EGD causes fewer reflexes, which provides sufficient time to examine the pharynx. On the other hand, TO-EGD caused the physicians to hurry in fear of having to cease examination because of severe reflexes. As a result, the time of pharyngeal examination might be shorter for the TO-EGD group.

The development of IEE has played an important role in the diagnosis of neoplasms of the colon, esophagus and stomach. Some reports have clarified the effectiveness of IEE and helped us to recognize superficial neoplastic lesions in the head and neck region[16-19]. TN-EGD with IEE also has been reported to be useful for the detection of pharyngeal neoplasms at an early stage [20,21]. Therefore, we used IEE routinely for pharyngeal observation in this study although no pharyngeal cancer was detected. This study did not determine whether TN-EGD can detect pharyngeal lesions more effectively than TO-EGD. In Japan, the number of patients with pharyngeal lesion is quite small compared to the number of patients with gastric cancer and esophageal cancer; annually, 213 people per 100,000 are newly diagnosed as stomach and/or esophageal cancer whilst 7.2 people per 100,000 are newly diagnosed as oral and/or pharyngeal cancer. If the study had been carried out on a high risk group, it might have been possible to confirm the value of TN-EGD for the detection of pharyngeal cancer. The image quality of GI endoscopes is superior to those of laryngoscopes, and the numbers of patient referred for EGD are quite high compared to those for laryngoscopy because most of them did not have any pharyngeal symptoms at the time of their EGD examination. On the other hand, a laryngoscope is often used for patients with pharyngeal symptoms, so we think it is very meaningful if GI endoscopists detect asymptomatic head and neck lesion during EGD. It is also very difficult to evaluate the detection ability of TN-EGD, TO-EGD and the laryngoscope but we think a comparative study of the laryngoscope and EGD and confirmation of detection in patients with malignant tumors would be very meaningful. Further analysis of the ability of TN-EGD to detect pharyngeal lesions is needed. A crossover study of TO-EGD versus TN-EGD using a TN endoscope is needed for thorough comparison of the TO and TN routes. However, our current study was based on practical medicine and was limited study in terms of the statistical analysis. Various factors such as anesthetic delivery, insertion route, diameter of the endoscopes, and variation in the skills of the endoscopists could influence the result and these may be limitations of our study. In conclusion, unsedated TN-EGD seems to be one of the most reliable methods for examination of the pharynx with minimal discomfort. Our present study was exploratory and not randomized. Further randomized and crossover studies are needed to clarify the value of TN-EGD for pharyngeal observation.

13. Mulcahy HE, Riches A, Kiely M. et al. A prospective controlled trial of an ultrathin versus a conventional endoscope in unsedated upper gastrointestinal endoscopy. Endoscopy. 2001;33:311- 316