NiTi shape memory alloy (NiTiSMA) and stainless steel (SS) arch wires have been used respectively in orthodontic clinical treatment all along. NiTiSMA has a super-elastic property, whereas it could cause disadvantageously anchorage teeth move. SS could provide adequate anchorage, but it could easily cause latent absorption of alveolar bone.[1-3]

Composite arch wire (CoAW) is a new type of arch wire solder made by NiTiSMA and SS. Its application could effectively reduce the suffering of patients and simplify treatment operation. Recently, a brand-new CoAW is developed with Cu interlayer by laser welding. Its joint bending angles could reach to 180°. Tensile strength is 520MPa and shape recovery ratio is up to 98%. This new type of CoAW could meet the requirements of clinical performance.[4]

Corrosion behavior is usually the most important property of metallic materials.[5] Intraoral structures are exposed to an ever-changing environment including saliva, foods, bacteria and their product. Protein in food and digestive enzymes make the saliva not only a single phosphate buffer, but a complex system containing protein.[6,7] Limited studies on corrosion behavior of alloys have been reported in protein-containing solutions. Brown observed inhibition of metal fretting corrosion in the presence of blood proteins.[8,9] It seems that the presence of protein may protect alloys from corrosion. The mechanisms by which proteins altered the corrosion resistance are not clear, but probably involve the adsorption of proteins onto the alloy surface.[10-12]

To understand the effect of corrosion in clinic, it is essential to become familiar with the environment in which CoAW must function and also its effect. The main interest of this article is to study the corrosion behavior of CoAW in artificial saliva (AS) with different concentrations of protein and provide a reference for the corrosion mechanism in protein-containing solution.

Ti-44.73 wt% NiTiSMA wire (Smart Co., Beijing), Fe-18Cr-8Ni SS (Grikin Advanced Materials Co., Ltd.) and 0.2mm pure Cu were used as base metals in this investigation. The dimensions of the wires are 30mm (length) × 0.64mm (width) × 0.48mm (thickness). The base metal was ground using SiC papers to remove oxide layer and then ultrasonically degreased in acetone. The NiTiSMA and SS wire were fixed in a self-constructed apparatus by wire-to-wire butt with pure Cu interlayer. A Nd:YAG laser welding system (JHM-1GY 300B) with a wavelength of 1064 nm was used for the welding. The optimized laser parameters used in the study were: 5.23J (laser power), 6 ms (welding time), and Φ=0.5mm.

All electrochemical measurements were performed by CHI 920C electrochemical workstation (CH Instruments, Shanghai). The counter electrode was a rectangular platinum plate and the reference electrode was a saturated calomel electrode (SCE). After grinding with SiC papers up to 2000 grit to guarantee consistent surface roughness, all samples were embedded in cold-curing epoxy resin, with an exposed sample surface area of 20×0.64 mm2. Each group contained 5 samples.

The scanning rate was 1mV/s, starting from -1mV/SCE to remove the surface film heterogeneity. In order to evaluate the repassivation ability, cyclic potentiodynamic polarization measurements were taken between -1000 and +1000mV.

3.1. Microstructure of the weldment

The potentiodynamic polarization behavior of CoAW is shown in Figure 2(a), and the detailed electrochemical parameters are listed in Table 1. The slope represented the oxygen consumption had a vertical stage in the cathodic section.[14,15] For the anodic polarization section, CoAW exhibited a typical passive region up to the pitting potential(Epit). The passive region of 0.05% protein AS was much larger, but that of 0.1% protein AS was nearly the same as non-protein AS. The corrosion potential (Ecorr) of 0.1% protein AS was similar as non-protein AS, but that of 0.05% protein AS was much lower. Epit represents a conservative measure of anodic pitting tendency because it gives the minimum potential below which pitting cannot be sustained. Epit in protein solutions were lower than that in non-protein solution, which means more easily tendency to corrosion.[16] The corrosion current densities of samples were all similar. 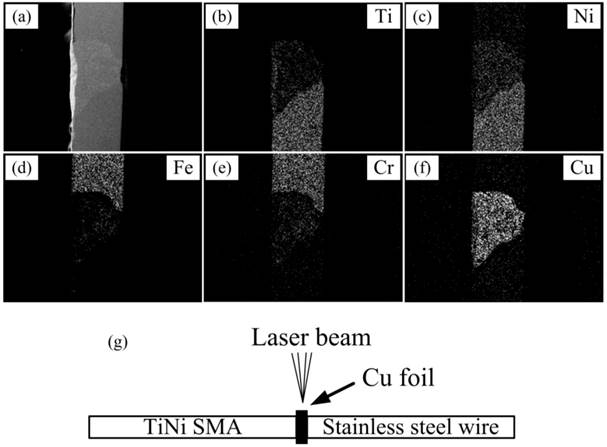 (a) Standard and (b) cyclic polarization curves for CoAW in different solutions.

Figure 2(b) presents typical cyclic polarization curves of CoAW in different AS solutions. The hysteresis loops occurred in the reverse anodic scan, but the loops in protein-containing AS were much smaller.

The hysteresis loops, with the Eprot above the corresponding Ecorr indicate that the specimens are capable of repassivation when the passive film is damaged.[19,20] The smaller Eprot and Ecorr distance in protein-containing AS indicates inferior protective film generated than simple AS. The reason is that negatively charged BSA deposited on the sample surface against the protection film loss as above discussed. BSA is a simple globulin, which can combine a variety of anionic, cationic and small molecules. Thus BSA could build a pellicle layer which can serve as a diffusion barrier for ionic components and reduce susceptibility to pitting attack. In vitro, proteins have been reported to increase corrosion for SS and pure metals.[21,22] Metal-protein surface complex exposure to human plasma fibronectin built by Endo could reduce the corrosion rate of Nitinol. However, it was only carried in chloric solution or cell culture medium, not in AS like this study.[23] Findings in this study further testify that protein could improve corrosion resistance in some cases.

Figure 3 shows the SEM morphologies of CoAW in different solutions. The surface of CoAW in non-protein AS was smooth and no obviously corrosion defections were observed. In 0.05% protein AS, the rougher surface indicates severer corrosion. However, with the increase of protein, the surface didn't become rougher. The results of weight loss and Cu release are listed in Table 2. Both the Cu release and weight loss reached the largest value in 0.05% protein AS.

The corrosion resistance of CoAW originates from the self-healing capability of passive oxide film which forms spontaneously on the surface. The passive film could rupture due to H+ ions penetrate through diffusion causing brittle regions and cracks.[24] Under normal circumstances, Cu could form a protective oxide film to prevent further corrosion. The outermost corrosion surface is mainly composed of Cu and O. Cu release was the result of exposed active metal surface, metal-ion transport and hydrolysis of the oxides.[18]

In non-protein AS, calcium and other small molecules could deposit on the oxide film, forming the barrier against further corrosion. The protein molecules deposited on the interlayer could compete with O molecule to combine Cu in protein-containing AS. But its combination product is not as stable as an oxygen-containing oxide film, leading to further destruction. Therefore, rougher surfaces were observed in 0.05% protein solution, together with more release of Cu ions and weight loss. However, with the protein concentration increase, the thickness of protein oxidation film is thickened causing corrosion resistance enhanced. The corrosion pits in 0.1% protein solution are not as much and deep as 0.05% group. For base-metal alloys, elemental release during corrosion can be affected in the presence of proteins.[25] Protein could aggravated corrosion and promoted the precipitation of harmful ions in a short period of time, but the long-term impact remains to be further studied.

For clinical applications, orthodontic arch wires confront dynamic conditions, which possibly damage the passive film causing metal surface react with oral tissue. To ensure the stable properties of CoAW, the effect of protein on corrosion behavior must be understand.[26] The results from current study are important because they reflect corrosion mechanism of CoAW and related-alloy, and provide insights into the role of proteins in corrosion process.

Under the different experimental conditions of this study, the following conclusions were drawn:

6. Schiff N, Grosgogeat B, Michele L, Dalard F. Influence of fluoride content and pH on the corrosion resistance of titanium and its alloys. Biomaterials. 2002;23:1995-2002