Rapidly proliferating cancer cells rely on increased glucose consumption for survival. The glucose analog 2-deoxy-D-glucose (2DG) cannot complete glycolysis and inhibits the growth of many types of cancers. It is unknown whether reduced glycolysis inhibits the growth of pancreatic cancer. Activation of nerve growth factor (NGF)-neurotrophic tyrosine kinase receptor type 1 (NTRK1) signaling leads to enhanced proliferation of these cells. We investigated the effect of 2DG treatment on the viability of NTRK1-transfected pancreatic cancer cells. After treatment with 2DG, the viability of pancreatic cancer cells was evaluated by MTT assay. SB203580 (a specific inhibitor of the p38-MAPK pathway) and PD98059 (an MAP2K1 [mitogen-activated protein kinase kinase 1, previously, MEK1] inhibitor) were used to inhibit p38-MAPK and ERKs, respectively. The percentage of apoptotic cells was determined by flow cytometry. Overexpression of NTRK1 in pancreatic cancer cells resulted in increased cell proliferation, which was reduced by PD98059-mediated inhibition of ERKs but not by suppression of p38-MAPK with SB203580. After treatment with 2DG, the percentage of apoptotic cells was greater in those with high expression of NTRK1 than in cells with low NTRK1 expression. Blocking the p38-MAPK pathway with SB203580 effectively abolished the apoptosis induced by 2DG. We conclude that pancreatic cancer cells with a high expression of NTRK1 are more sensitive to 2DG-induced apoptosis, through the p38-MAPK pathway.

High levels of NGF and NTRK1 in pancreatic cancers and the perineurium of pancreatic nerves are closely correlated with perineural invasion [10], tumor aggressiveness, and unfavorable prognosis, and are accompanied by activation of both ERKs and p38-MAPK signaling. The function of the activation of p38-MAPK signaling by NGF is not well understood. It has been shown that activation of p38-MAPK is associated with proliferation, migration, and resistance to apoptosis [11, 12]. Yet p38-MAPK also activates p53, induces cell-cycle arrest, apoptosis, and differentiation, and makes cells sensitive to chemotherapy [9, 13-17].

Unlike normal cells that gain energy through oxidative phosphorylation in mitochondria, the increased proliferation of cells in most types of cancers depends upon accelerated anaerobic glycolysis in the cytosol [20-22], a phenomenon known as the Warburg effect [23].

Therefore, targeting the anaerobic glycolytic pathway may preferentially kill malignant cells while sparing the normal [24, 25]. Since pancreatic cancer cells have been shown to have an increased utilization of glucose [26, 27], it is intriguing to target the glycolytic metabolic pathway for the treatment of pancreatic cancers [28].

Cells of the human pancreatic cancer cell lines ASPC-1, BXPC-3, and Panc-1 were purchased from the Type Culture Collection of the Chinese Academy of Sciences (Shanghai, China). ASPC-1 cells were grown in RPMI-1640 and BXPC-3 or Panc-1 cells in Dulbecco's modified Eagle's medium (DMEM; both from Gibco) supplemented with 10% heat-inactivated fetal bovine serum (FBS; Hyclone), penicillin 100 U/mL, and streptomycin 100 μg/mL (Gibco). The cultures were maintained at 37 °C in a 5% CO2 incubator.

The plasmid pcDNA3.1-NTRK1 was provided by Wei Liu (Fourth Military Medical University, Xi'an, China). All transfections were performed using X-tremeGENE HP in accordance with the manufacturer's instructions, at the ratio of 1:1 (Roche). For generation of NTRK1-transfected or non-NTRK1-transfected cell lines, ASPC-1 cells were transfected with pcDNA3.1-NTRK1 vector or pcDNA3.1 blank vector, respectively. Cells were maintained in 200 ng/mL G418 for 21 days. Individual clones were screened for expression of NTRK1 by Western blot analysis.

Human NTRK1-specific and control siRNAs were purchased from Biocompare (SMARTpool, Charlottesville, VA). BXPC-3 or Panc-1 cells were plated in 6-well plates and incubated for 24 h prior to transfection. Eight microliters of siPORT Amine transfection reagent (Ambion) were added to 200 μL serum-free medium and incubated at room temperature for 15 min. The transfection reagent/siRNA complexes were added to each well containing 800 μL medium with 10% FBS. Six hours later, 1 mL DMEM containing 10% FBS was added into each well.

Twenty-four hours after treatment, 106 of cells were harvested by centrifuging at 200 ×g for 5 min. Cells were resuspended in 100 μL of Annexin-V-FLUOS (Roche), incubated at room temperature for 15 min, and subjected to flow cytometry.

NGF-NTRK1 signaling enhances cell proliferation independently on the p38-MAPK pathway. NGF promotes proliferation, invasion and survival of many types of cells with high expression of NTRK1 including pancreatic cancer cells. In NTRK1-transfected ASPC-1 cells, 200 ng/mL NGF for 72 h increased the cell number by 1.5-fold in comparison to untreated group (P < 0.05). In contrast, NGF showed no obvious influence on the growth of ASPC-1 cells transfected with the empty vector (Fig. 1A). Thus the growth-stimulatory effects of NGF depend on the availability of its receptor NTRK1. Similar results were observed in BXPC-3 and Panc-1 cells (Fig. 1B and C). 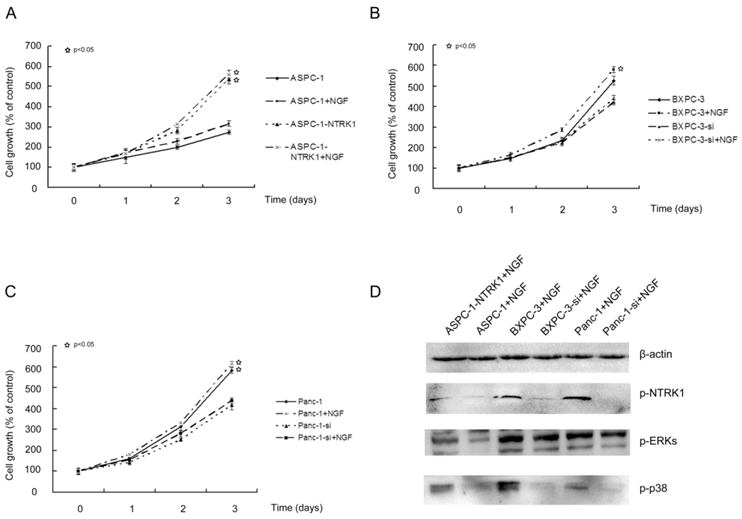 NGF-treated NTRK1-transfected cells displayed a dramatic increase in the phosphorylation of ERK and p38 (Fig. 1D). This indicates that NGF-NTRK1 pathway upregulates the p38-MAPK pathway and ERKs [29, 30]. To test whether these signaling pathways are involved in the enhanced proliferation response to NGF-NTRK1 pathway activation, we inhibited p38-MAPK with SB203580 and ERKs with PD98059. We found that, in the presence of NGF, PD98059 but not SB203580 significantly decreased the cell viability of cells transfected with NTRK1 after 72 h of incubation (Fig. 2). These data showed that the enhanced cell proliferation in response to NGF-NTRK1 activation is correlated with ERKs, and is independent of the p38-MAPK pathway.

The growth of NTRK1-transfected ASPC-1 cells treated with 15 mM 2DG was 40% that of non-treated NTRK1-transfected ASPC-1 cells, in a time-dependent association. The cell growth of non-transfected ASPC-1 cells was inhibited 17% at 72 h. BXPC-3 and Panc-1 cells in which NTRK1 expression was downregulated via siRNA were less sensitive to 2DG than cells with normal NTRK1 expression (Figure 3C-F). As increased p38-MAPK and ERK activity was observed in NTRK1-transfected cells, we next checked whether upregulation of p38-MAPK or ERKs via the NGF-NTRK1 pathway were involved in 2DG-induced cell growth. For this, we treated cells with SB203580 or PD98059, and found that SB203580 but not PD98059 significantly attenuated the number of apoptotic cells caused by 2DG in all cell types that overexpressed NTRK1 (Fig. 3A-F). Consistent with this result, blocking p38-MAPK with SB203580 greatly reduced apoptosis induced by 2DG, at 24 h (Fig. 3G). These results indicate that apoptosis induced by 2DG in pancreatic cancer cells can be reduced by inhibition of the p38-MAPK pathway.

Blocking ERKs by PD98059 greatly suppressed the proliferation of cells with overexpression of NTRK1. Results are expressed as a percentage of control cells at 8 h after plating. 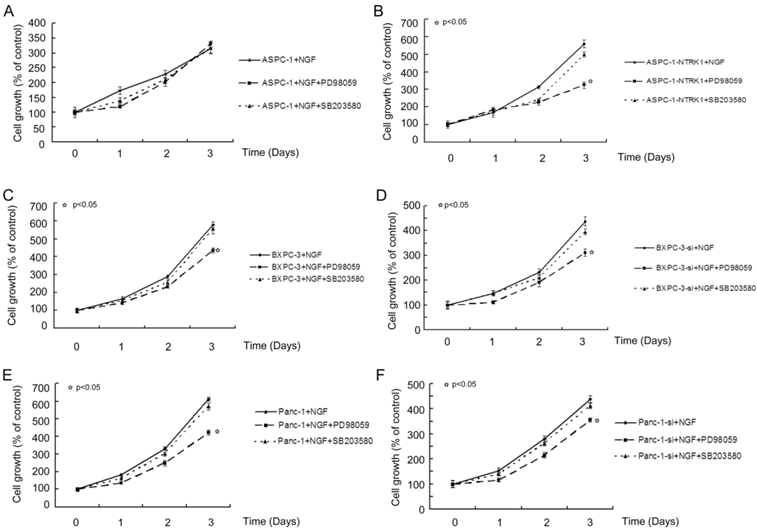 2DG-induced apoptosis depends on p38-MAPK signaling but not ERKs. (A-F) 2DG significantly reduced the growth of six types of cells, while inhibition of ERKs did not show any obvious influence. However, by inhibiting p38-MAPK with SB203580, the growth inhibition was greatly alleviated. This phenomenon was not observed in untreated ASPC-1, BXPC-3-si and Panc-1-si cells, which had a low expression of NTRK1. (G) 2DG induced apoptosis in cells with higher expression of NTRK1 after 24 h of treatment. Treatment of PD98059 did not alleviate this phenomenon, while SB203580 did. 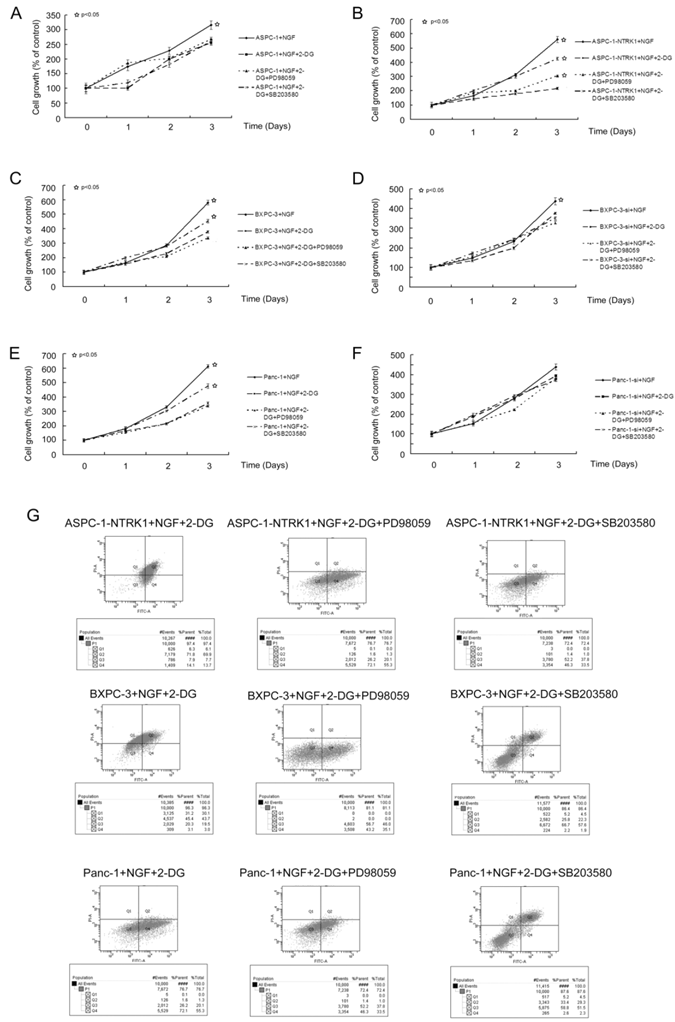 NTRK1 is overexpressed in various types of tumors, suggesting that NTRK1 may be a valuable therapeutic target. Unfortunate, it was found that pan-Trk inhibitors could not discriminate among NTRK1, NTRK2, and NTRK3, and therefore have relatively poor specificity. They also inhibited other targets, such as fms-related tyrosine kinase 3 (FLT3) [31]. Thus, it remains imperative to develop specifically targeted cytotoxic drugs, especially when targeted toward the hallmarks of cancer cells. For example, it is widely accepted that malignant tumors are characterized by higher rates of glucose usage and glycolysis [32]. The higher cellular proliferation rate of these malignancies depends on elevated ATP consumption [33, 34]. Thus targeting the glycolytic metabolism of cancer cells is a promising strategy for cancer therapy.

The glucose analog 2DG acts as a competitive inhibitor of glucose metabolism, causing a depletion of cellular ATP and leading to cessation of the cell cycle and apoptosis [35]. In addition, 2DG can inhibit protein glycosylation and induce accumulation of misfolded proteins in the endoplasmic reticulum, leading to endoplasmic reticulum stress and constant apoptosis [36]. 2DG has been proposed to be an anti-cancer drug for a variety of cancer cells.

We thank Dr. Wei Liu for providing the plasmids used in this study. This study was supported by the National Natural Science Foundation of China (30973489).