Background and Aim: Echocardiographic left atrial diameter (LAD) has been documented to be an independent predictor of adverse cardiovascular outcomes in various populations. An enlarged left atrium is frequently noted in chronic kidney disease (CKD). We examined the association between albumin and indexed LAD (indexed to height) and assessed whether the combination of indexed LAD and albumin was independently associated with renal outcomes in patients with CKD stages 3-5.

Methods: This longitudinal study enrolled 395 patients, who were classified into four groups according to median values of indexed LAD (LAD/height) and albumin. The change in renal function was measured by estimated glomerular filtration rate (eGFR) slope. Rapid renal progression was defined as eGFR slope less than -3 ml/min/1.73 m2/year. The renal end point was defined as commencement of dialysis.

M-mode left atrial (LA) dimension is simple, convenient, and commonly used in clinical practice and research studies (1). LA enlargement detected by echocardiography is frequently noted in patients with chronic kidney disease (CKD) due to pressure and volume overload (2). Recently, an enlarged left atrium has been considered a marker of adverse cardiovascular outcomes in chronic renal failure patients (3, 4). However, published data of LA size on renal outcomes in CKD is limited and inconsistent. One study found that LA volume index was an independent risk factor for the period of time before dialysis in patients with CKD stages 4-5 (5), whereas another study suggested only a weak association between LA size and renal outcome in CKD subjects (6). Thus, the status of LA enlargement as an independent risk marker for renal progression remains controversial.

Previous studies had identified several risk factors for LA enlargement, including overweight, increased systolic and pulse pressures, duration of hypertension, and inflammatory markers (7-9). In report by Kursat et al, they found the malnutrition index, calculated using Subjective Global Assessment, had a positive correlation with LA diameter (LAD) (10). They explained their findings by inadequate volume control. The result suggested that serum albumin, a well-known nutrition marker, might be related to LAD. Low serum albumin level had also been reported to be a significant predictor for progression of renal function through the mechanism of inflammation. Inflammation contributed to the progression of CKD by inducing the release of cytokines and the increased production and activity of adhesion molecules, which together contribute to T cell adhesion and migration into the interstitium, subsequently attracting pro-fibrotic factors (11, 12).

The study was conducted in a regional hospital in southern Taiwan. We consecutively enrolled 518 pre-dialysis patients with stages 3 to 5 of CKD according to the National Kidney Foundation-Kidney Disease Outcomes Quality Initiative (K/DOQI) guidelines (14) from our Outpatient Department of Internal Medicine from January 2007 to May 2010. We classified our patients with evidence of kidney damage lasting for more than 3 months into CKD stages 3, 4, and 5, based on estimated glomerular filtration rate (eGFR) level (mL/min/1.73 m2) of 30 to 59, 15 to 29, and < 15, respectively. Three patients with significant mitral valve disease and 5 patients with inadequate image visualization were excluded. Five patients refused echocardiography examinations due to personal reasons. Fifty-one patients with less than three eGFR measurements during the follow-up period were excluded. In addition, those patients with mortality (n = 9) or entering dialysis therapy (n = 30) within 3 months after enrollment were also excluded to avoid incomplete observation of change in renal function. Because atrial fibrillation would influence LAD, patients with atrial fibrillation (n = 20) were also excluded. Finally, 395 patients (mean age 66.6 ± 12.1 years, 265 males) were included in this study. The protocol was approved by our Institutional Review Board and all enrolled patients gave written, informed consent.

Evaluation of cardiac structure and function

Demographic and medical data including age, gender, smoking history (ever versus never), and comorbid conditions were obtained from medical records or interviews with patients. The body mass index (BMI) was calculated as the ratio of weight in kilograms divided by square of height in meters. Laboratory data were measured from fasting blood samples using an autoanalyzer (Roche Diagnostics GmbH, D-68298 Mannheim COBAS Integra 400). Serum creatinine was measured by the compensated Jaffé (kinetic alkaline picrate) method in a Roche/Integra 400 Analyzer (Roche Diagnostics, Mannheim, Germany) using a calibrator traceable to isotope-dilution mass spectrometry (17). The value of eGFR was calculated using the 4-variable equation in the Modification of Diet in Renal Disease (MDRD) study (18). Proteinuria was examined by dipsticks (Hema-Combistix, Bayer Diagnostics). A test result of 1+ or more was defined as positive. Blood and urine samples were obtained within 1 month of enrollment. In addition, information regarding patient medications including aspirin, angiotensin converting enzyme inhibitors (ACEIs), angiotensin II receptor blockers (ARBs), non ACEI/ARB antihypertensive drugs, and HMG-CoA reductase inhibitors (statins) during the study period was obtained from medical records.

The rate in renal function decline was assessed by the eGFR slope, defined as the regression coefficient between eGFR and time in unit of ml/min/1.73 m2/year. At least three eGFR measurements after echocardiographic examination were required to estimate eGFR slope. Any reduction greater than 3 ml/min/1.73 m2/year, i.e. slope more negative than -3 ml/min/1.73 m2/year (< -3), was considered as rapid renal progression (19).

The renal end point was defined as commencement of dialysis. In patients reaching renal end point, renal function data were censored at the start of renal replacement therapy. The other patients were followed until February 2011. The commencement of dialysis was determined according to the regulations by the National Health Insurance for dialysis therapy based on laboratory data, nutrition status, and uremic symptoms and signs.

Thirty patients were randomly selected for evaluation of the interobserver variability of LAD measurement by 2 independent observers. To get the intraobsever variability, the same measurements were repeated 1 week apart. Mean percent error was calculated as the absolute difference divided by the average of the two observations.

The study patients were stratified into 4 groups according to median values of indexed LAD and albumin. Multiple comparisons among the study groups were performed by one-way analysis of variance (ANOVA) followed by post hoc test adjusted with a Bonferroni correction. The relationship between two continuous variables was assessed by a bivariate correlation method (Pearson's correlation). Multiple linear regression analysis was used to identify the factors associated with indexed LAD. Multiple logistic regression analysis was employed to identify the risk factors associated with rapid renal progression. Time to commencement of dialysis and covariates of risk factors were modeled using the Cox proportional hazards model. Survival curve for dialysis was derived using Cox-regression analysis. Significant variables in univariate analysis were selected for multivariate analysis. A difference was considered significant if the P value was less than 0.05. 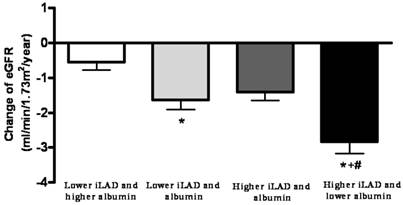 Risk of progression to dialysis 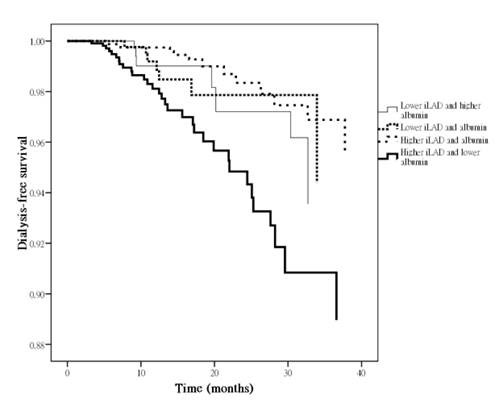 The association between albumin and LAD may be resulted from an association of malnutrition with other risk factors such as inflammation and atherosclerosis. Malnutrition may worsen patient outcome by aggravating existing inflammation and accelerating atherosclerosis (24). Inflammation may contribute to LA enlargement through the process of endothelial dysfunction (7, 9, 26). In addition, atherosclerosis directly causes a decrease in blood perfusion in the lower extremities and an increase in arterial wall stiffness, contributing to decreasing arterial distensibility and then final to LA enlargement (27, 28). Demirci et al. (22) had also evaluated the association between malnutrition-inflammation-atherosclerosis and volume status in peritoneal dialysis patients. They used the multi-frequency bioelectrical impedance analysis technique, a useful tool to measure body fluid, to analysis the relationship between extracellular volume and echocardiographic parameters. They found fluid overload defined by multi-frequency bioelectrical impedance analysis technique was significantly associated with low albumin, high C-reactive protein, and elevated carotid artery intima-media thickness. Besides, extracellular volume status was significantly associated with LAD and LVMI (22). In our study, we used indexed LAD as a rough surrogate of fluid status and found indexed LAD had a significant correlation with left ventricular filling pressure indicated by E/Ea. Although we also found increased indexed LAD significantly correlated with low albumin and the combination of indexed LAD and albumin was useful in identification of patients with adverse renal outcomes, further researches are still warranted to determine the association between fluid and nutrition statuses and evaluate whether the combination of fluid and nutrition statuses is useful in prediction of poor renal outcomes.

An enlarged left atrium was independently associated with adverse cardiovascular outcomes such as stroke, congestive heart failure, atrial fibrillation, and cardiovascular death in various pathologic conditions (1, 3, 4, 29). Left atrium acts as a volume sensor of the heart and its dilatation reflects a sustained elevation in left ventricular filling pressure (30, 31). The LA size was directly proportional to the left ventricular filling pressure (31). Besides, LA enlargement is closely related to LVH (32). Our study also revealed that increased indexed LAD was correlated with high LVMI, LVH, and high E/Ea ratio, which was consistent with previous findings.

There were limitations to our study. LAD may not accurately reflect the true LA chamber in most patients. LA volume may be more precise, but LAD is a valid surrogate of LA size. LAD is more easily obtained than LA volume and measurement of LAD has already been the part of a routine echocardiographic evaluation. Some large population-based cohort studies, such as Strong Heart Study (1) and the Losartan Intervention For End point (13), used LAD as a surrogate of LA size. The majority of our patients were treated chronically with antihypertensive medications. For ethical reasons, we did not withdraw these medications. Hence, we could not exclude the influence of antihypertensive agents on our findings. In addition, it should be noted that serum albumin, a marker of visceral protein stores, can be influenced by several non-nutritional factors such as plasma volume expansion, albumin redistribution, exogenous loss, increased fractional catabolic rate, and decreased synthesis (36). Hence, the relationship between LAD and nutritional indices other than serum albumin, such as handgrip strength (37) and Subjective Global Assessment (38), needs further clarification. Finally, the quantitative assessment of proteinuria was not performed, so the impact of proteinuria could not be assessed properly in this study.

In conclusion, our study demonstrated that albumin was independently associated with indexed LAD and suggested that the combination of indexed LAD and serum albumin was independently associated with rapid renal progression and progression to dialysis. The association between indexed LAD and adverse renal outcomes might be introduced in part because of a direct association between albumin and indexed LAD. Assessments of serum albumin level and indexed LAD by echocardiography might be useful in identification of high risk group for adverse renal outcomes in patients with CKD.

There is no competing interest in the information contained in the manuscript.