Two billion people have been exposed to hepatitis B virus (HBV), and 350-400 million people remain chronically infected worldwide. In Japan, the prevalence of HBV carriers is estimated at ~1% of the population, but HBV is a major health issue because it causes acute hepatitis, chronic hepatitis, cirrhosis, and hepatocellular carcinoma (HCC) [1, 2].

Lamivudine (LAM) is a reverse-transcriptase inhibitor of HBV DNA polymerase that possesses excellent profile of safety and tolerability and causes inhibition of viral replication. LAM was the first nucleos(t)ide analogue (NA) to be approved for antiviral treatment of hepatitis B patients [3, 4]. Entecavir (ETV), a deoxyguanosine analogue, is a potent and selective inhibitor of HBV replication. The in vitro potency of ETV is 100- to 1,000-fold greater than that of LAM, and it has a selectivity index (concentration of drug required to reduce viable cell number by 50% [CC50] / concentration of drug required to reduce viral replication by 50% [EC50]) of approximately 8,000 [5, 6]. LAM (until 2005) and ETV (from 2006) have been used as first-line NAs for most patients with chronic hepatitis B in Japan. Most patients with chronic hepatitis B have been undergoing treatment for longer durations, and prolonged treatment is associated with increasing rates of viral breakthrough [7]. It has been reported that not all cases are associated with resistance mutations [8, 9]. We have also reported that some cases of viral breakthrough during ETV treatment were related to poor adherence to medication [10].

In the present study, we aimed to investigate whether drug adherence is related to viral breakthrough in chronic hepatitis B patients treated with LAM or ETV. We also investigated the pattern of poor adherence and suggested how adherence to medication could be improved.

Two hundred seventy-five NA-treated naïve patients (185 ETV- and 90 LAM-treated patients), who were admitted to Chiba University Hospital between April 2000 and September 2011, were enrolled (Figure 1). Some of these patients had already been included in a previous report [10]. Between November 2011 and April 2012, doctors performed medical interviews of those patients to determine their adherence to medication. Seventy-two patients (50 ETV- and 22 LAM-treated patients) were excluded from this retrospective analysis, because their adherence to medication could not be confirmed. One hundred thirty-five patients were administered 0.5 mg of ETV daily and 68 patients were administered 100 mg of LAM daily (Table 1). In all patients, serum hepatitis B surface antigen (HBsAg) and HBV DNA were positive. All patients had negative results for hepatitis C virus or human immunodeficiency virus antibodies. Physical examinations, serum liver enzyme tests, and HBV marker tests were performed at least every 3 months. The study was carried out in accordance with the Helsinki Declaration, and was approved by the Ethics Committee of Chiba University, Graduate School of Medicine (No. 977).

Patients, adherence rates, and the prevalence of viral breakthrough in this study. ETV, entecavir; LAM, lamivudine. 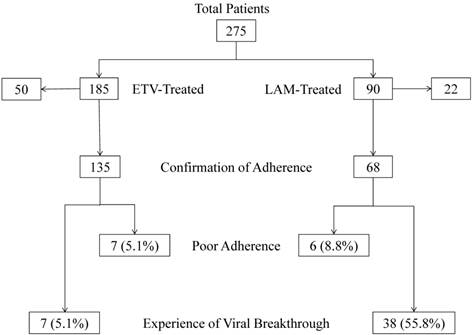 The follow-up period ended when the NA was switched to another NA or another NA was added, or it was discontinued for various reasons.

Definition of adherence to medication

Viral breakthrough was defined as an increase of ≥ 1 log IU/mL in serum HBV DNA level from nadir.

Statistical analyses were performed using SAS 9.3 Software (SAS Institute, Cary, NC, USA). Continuous variables were expressed as mean ± standard deviation and were compared by Student's t-test or Welch's t-test. Categorical variables were compared by chi-square test or Fisher's exact probability test. The Kaplan-Meier method was used to calculate viral breakthrough rates. Baseline was taken as the date when the first dose of LAM or ETV was taken. Statistical significance was considered at a P-value < 0.05.

Adherence to medication, and viral breakthrough between ETV- and LAM-treated patients 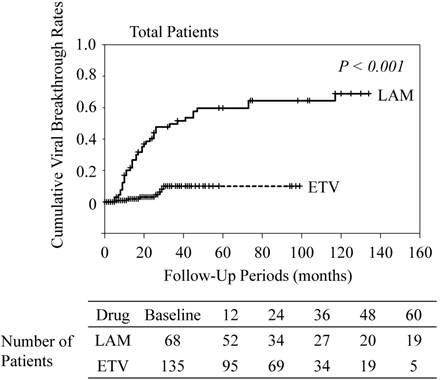 Patients with poor adherence to medication. 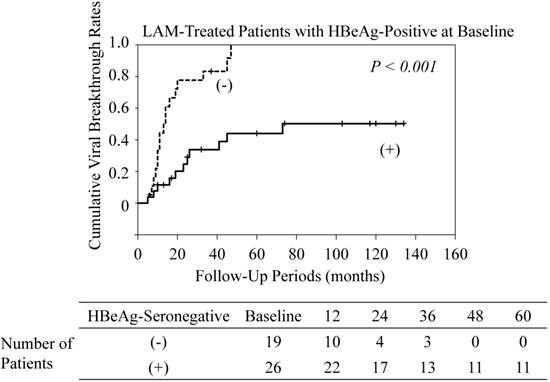 Viral breakthrough in patients who achieved, and did not achieve HBV DNA negativity

Correlation between adherence to medication and viral breakthrough

ETV, entecavir; LAM, lamivudine; N.D., not determined. Numbers of amino acid positions were according to Refs. 2 and 10. 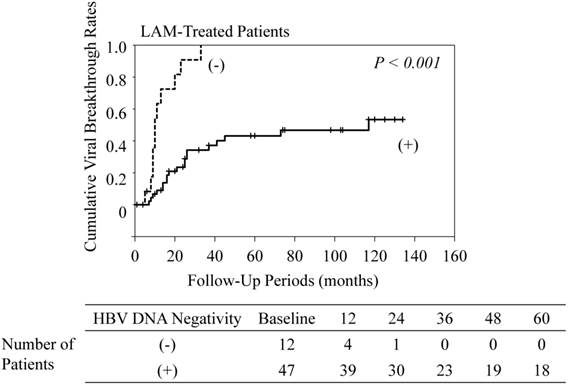 Association between adherence to medication and viral breakthrough. 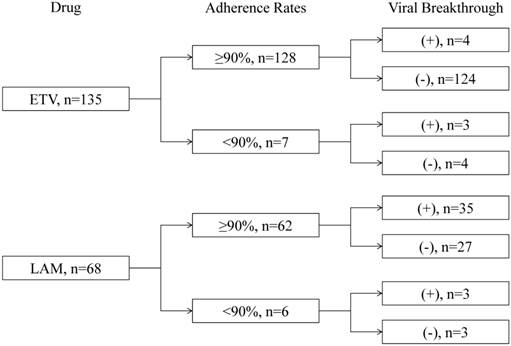 In the current study, adherence to medication of most patients was excellent. The reasons for this might be as follows: (1) Our setting was a University Hospital, and this may have strengthened their will to succeeded with the treatment; (2) some patients with poor adherence might have been excluded because they did not see a doctor during the interview period; and (3) the rate of adherence to medication was based on patient self-assessment. A previous report showed that adherence might be underestimated by the Medication Event Monitoring System, a system that automatically records whenever a drug bottle is opened, and might be overestimated by pill counting and at interviews [26]. We classified the adherence rate as good at 90% or more, and as poor at less than 90%. However, we could not prove any significant influence of this classification on viral breakthrough as well as resistance mutation.

In the 13 patients with poor adherence (Table 2), we examined the reasons for their failure to take the pills. All 13 patients displayed some carelessness about taking pills. Two ETV-treated patients did not see a doctor and could not take pills continuously for a certain period of time, which particularly appeared to affect their viral breakthrough.

In conclusion, viral breakthrough associated with poor adherence could be an important issue in the treatment with strong nucleoside analogues, such as ETV.

We are all thankful to our colleagues at the liver unit of our hospitals who cared for the patients described herein.

27. Zoutendijk R, Reijnders JG, Brown A. et al. Entecavir treatment for chronic hepatitis B: adaptation is not needed for the majority of naïve patients with a partial virological response. Hepatology. 2011;54:443-451