Objective: To investigate whether microvascular damage is involved in the pathogenesis of heroin induced spongiform leukoencephalopathy (HSLE).

Methods: The brain tissues were collected from 4 HSLE patients and 5 controls and then fixed in 4% paraformaldehyde. The frontal lobe, corpus callosum and cerebellum were separated. The expressions of myelin base protein (MBP) and CD34 were detected by immunohistochemistry. TUNEL staining was applied to detect cell apoptosis. The correlation between microvascular changes and pathological vacuoles was evaluated.

Previous imaging has shown that heroin induced spongiform leukoencephalopathy (HSLE) is pathologically characterized by extensive and symmetrical lesions in the white matter, which is mainly found in the cerebellum, posterior limb of internal capsule, splenium of the corpus callosum, parietal lobe and occipital lobe [1]. The increase in myelin base protein (MBP) has been found in the cerebral spinal fluid (CSF) of HSLE patients [2]. The pathogenesis of HSLE was found to be related to the demyelination of the central nervous system (CNS). Single photon emission computed tomography (SPECT) for detection of cerebral perfusion indicates the reduction in blood flow in the cerebral white matter of HSLE patients accompanied by involvement of cerebral grey matter to different extents [3]. There is evidence showing that ischemia/hypoxia, chemical poisoning and radiographic exposure may induce the secondary apoptosis of oligodendrocytes, finally resulting in axon demyelination and loss of transduction [4, 5]. The damage to the cerebral white matter in HSLE patients is similar to that in hypoxic - ischemic encephalopathy patients, while HSLE is different from delayed post-anoxic leukoencephalopathy. The most involved parts of the post-anoxic leukoencephalopathy are cerebral cortex, hippocampus, cerebellum, thalamus, caudate nucleus and brainstem motor nuclei, while HSLE mainly involves the white matter.

Our previous study showed that the vacuolar degeneration in the white matter of HSLE patients was related to the oligodendrocyte apoptosis induced demyelination. Whether there is alteration in the cerebral microvessels of HSLE patients and whether this alteration is related to the oligodendrocyte apoptosis are still unclear. In the present study, immunohistochemistry for MBP was performed to detect the demyelination, TUNEL staining to measure the apoptosis, and Masson's trichrome staining to detect the cerebral microvessels. In addition, the correlation between the alteration of microvessels and pathological vacuolar degeneration was evaluated. Our findings may shed light on the pathogenesis of HSLE.

The brain was collected from 4 HSLE patients in Nanfang Hospital from July 2001 to April 2004 (3 males and 1 female; age: 26~38 years). The duration of heroin abuse was 1.5~10 years (mean: 3.7 years). The course of disease was 5 days in 1 patient, 15 days in 1 and 2 months in 2. In the control group, the brain was collected from 5 dead patients without cerebral lesions in the same period, including 3 cases of sudden cardiac death and 2 cases of pulmonary embolism. There were 4 males and 1 female (age: 51~78 years). Informed consent was obtained from the family members of the deceased. This study was approved by the Ethics Committee of our Hospital.

Detection of apoptosis by TUNEL staining

Sections were routinely deparaffinized and hydrated. After washing in PBS, sections were rinsed in 3% H2O2 in methanol for 10 min to inactivate the endogenous peroxidase. Then, these sections were treated with 50 μl of TdT reaction solution (containing 45 μl of equilibration buffer, 1 μl of biotin-11-dUTP and 4 μl of TdT enzyme) at 37°C in dark for 60 min and with 50 μl of streptavidin-HRP working solution (containing 0.5 μl of streptavidin-HRP and 99.5 μl of PBS) at 37°C in dark for 30 min. Visualization was done with 50 μl of DAB working solution at room temperature for 10 min. Positive control was prepared according to the manufacturer's instructions to confirm the reliability of testing, and TdT reaction solution was replaced with PBS in the negative control. Under light microscope, 5 fields were randomly selected from each section at a high magnification (×40) and the number of TUNEL positive cells in the cortical gray matter, cerebellar white matter and corpus callosum was counted and averaged for statistical analysis.

Sections were routinely deparaffinized and hydrated. These sections were blocked in 3% H2O2 in 70% methanol for 10 min to inactivate endogenous peroxidase. Antigen retrieval was done in 0.1 M sodium citrate buffer (pH 6.0) at 95°C for 13 min. Then, sections were blocked in goat serum working solution (1% bovine serum albumin [BSA] in PBS, 1:500) at room temperature for 30 min. Then, these sections were then treated with rabbit anti-human MBP antibody (1:100) or rabbit anti-human CD34 antibody (1:100) in PBS containing 0.05% TritonX-100 and 1% BSA in a humidified environment at 4°C overnight and then with secondary antibody. Visualization was done with DAB. In the negative controls, primary antibody or secondary antibody was not added. The positive control was prepared according to the manufacturer's instructions [7, 8].

Detection of demyelination in white matter

Following immunohistochemistry for MBP, Anymicro image analysis system was employed to capture the representative photographs under a light microscope.

Under a light microscope, image analysis system was employed to examine the sections following Masson's trichrome staining and immunohistochemistry for CD34, and the structure and morphology of cerebral microvessels and endothelial cells were evaluated.

The single cells or cell groups positive for CD34 were counted regardless of lumen. The positive cells had clear borderline with surrounding blood vessels and tissues. At low magnification (×10), the cortical gray matter, cerebellar white matter and corpus callosum were localized, and 5 fields were randomly selected from each section at high magnification (×40) followed by counting of blood vessels and averaging.

SPSS version 13.0 for windows was employed for statistical analysis, and data were expressed as mean ± standard deviation (

Macroscopy of brains in both groups

In the control group, the brain was structurally intact. After washing in PBS, the borderline between the gray matter and white matter was clear, and the brain had favorable elasticity. The freshness could be classified as grade B.

In the HSLE patients, the myelin sheaths in the subcortical white matter had lighter staining as compared to the control group, the staining was uneven, vacuole-like unstained region was noted, and the number of vacuoles increased with the increase in depth in the brain. In the corpus callosum, fracture or collapse of fibers was found, and vacuoles were also observed. The cerebellar white matter was loose, and a large amount of vacuole-like unstained regions were identified. These findings suggest that there is extensive and diffused vacuole-like demyelination in the cerebral white matter of HSLE patients (Figure 1).

Immunohistochemistry for MBP: A: Cerebellum in the control group (×10); B: Cerebellum in the HSLE group (×10); C: Myelin sheath was dense in the cerebellar white matter and had clear texture in the control group (×60); D: Myelin sheath was loose, fractured and had disordered structure in the HSLE group (×60).

In the HSLE group, TUNEL staining showed brown cells (apoptotic cells) in the gray matter of frontal lobe, white matter of cerebellum and corpus callosum, and the staining was uneven. Morphologically, chromatin condensation and karyorrhexis occurred, and crescent condensed chromatin was found surrounding the nucleus. The number of TUNEL positive cells in the HSLE group was markedly higher than that in the control group (F=389.451, P<0.001). The number of TUNEL positive cells in the specific region was significantly different between two groups (F=80.062, P<0.001) except in the cerebellum and corpus callosum (P=0.151). However, significant difference was noted between gray matter of frontal lobe and cerebellum / corpus callosum (P<0.001) (Figure 2 and Table 1). 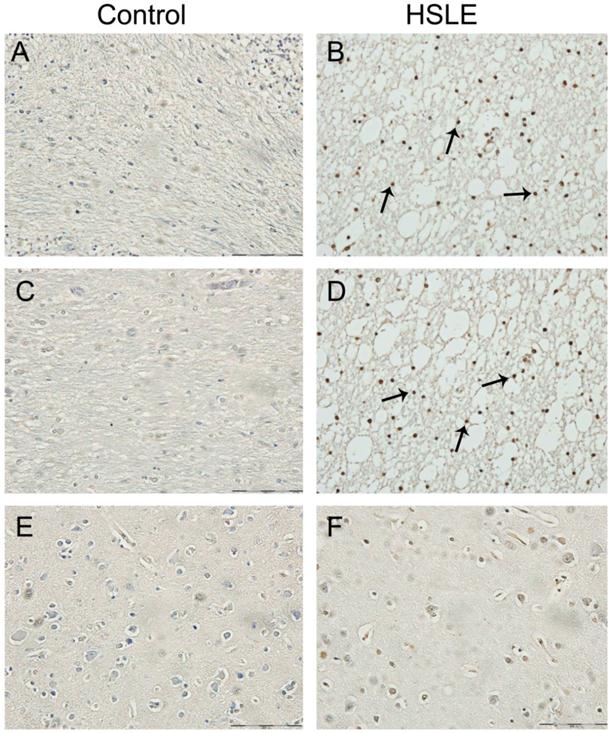 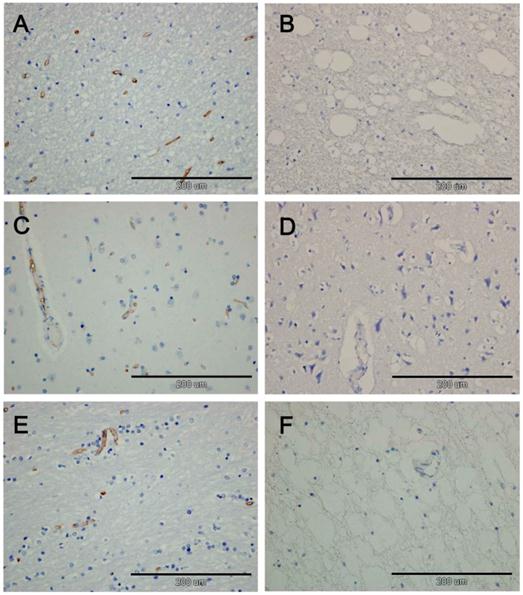 The electron microscopy of the brain of patients died of stroke has shown the swelling of endothelial cells which protrude into the vascular lumen, and the exudation of proteins into the loose brain parenchyma [11]. These findings demonstrate that the progressive damage to the white matter is not caused by the axonal degeneration following stroke, but by the pathological changes in small blood vessels, especially the microvessels. Thus, the vascular leukoencephalopathy may be an arteriolar disease due to the damage to arterioles [11]. The cerebral ischemia-induced apoptosis is initiated by the apoptosis related signals. With the aid of specific signal transduction, apoptosis related genes are activated and signals are transduced into nuclear endonuclease executing death [12]. TUNEL staining aims to detect the 3'-OH of fractured DNA and the apoptotic cells can be specifically located. Under a microscope, the apoptotic cells are observed and counted. In the normal or proliferative cells, there is no fractured DNA, and thus these are not stained in the TUNEL staining. In the present study, results showed there were a few TUNEL positive cells in the gray matter of the cerebrum of HSLE patients, but numerous TUNEL positive cells were found in the white matter, mainly in the subcortical white matter, corpus callosum and white matter of the cerebellum. There was significant difference in the number of TUNEL positive cells between two groups. In addition, these findings were consistent with results in the morphological detection of demyelination. These suggest that the demyelination in the white matter of HSLE patients is related to the apoptosis of oligodendrocytes. Following ischemia/hypoxia, the metabolism in neuronal cells is disordered, and oligodendrocytes are more sensitive to the ischemia/hypoxia than other neuronal cells. Thus, the oligodendrocytes become apoptotic, and fracture and loss of myelin sheath and presence of vacuoles occur subsequently.

There is evidence showing that ischemia/hypoxia may cause the influx of calcium into the axon with myelin sheath, leading to the activation of calcium dependent proteolytic enzymes. These enzymes can degrade the MBP resulting in its reduction [13]. Damage to the cerebral microvessels may cause reduction in the blood flow in the watershed region and increase the hydrolysis of MBP leading to the damage to the myelin sheath in the white matter [10]. This might be another cause of demyelination in the white matter following ischemia/hypoxia.

In HSLE patients, extensive vacuolar degeneration was noted in the cerebral white matter, cerebellar white matter and corpus callosum, which was closely related to the changes in blood vessels. Especially, there were vacuole-like non-staining regions around the arterioles and capillaries, and the surrounding area of vacuoles was irregularly round. In the cortex, there were also vacuoles surrounding the small vessels and capillaries. Immunohistochemistry for macromolecules (such as eNOS and CD34) secreted by vascular endothelial cells has been used as a common technique to investigate the microvessels. In HSLE patients, the CD34 positive cells were not evident in the gray matter of cerebrum, white matter of cerebellum and corpus callosum, which was markedly different from that in the control group. The reduction or even loss of CD34 positive cells suggests the damage to the vascular endothelial cells in the HSLE patients. It is speculated that the cerebrovascular impairment may lead to the microcirculation dysfunction and cerebral ischemia/hypoxia. However, the oligodendrocytes in the white matter are more sensitive to ischemia/hypoxia than other neuronal cells [14], and thus severe vacuolar degeneration is present in the white matter of patients with HSLE at an early stage.

4. A Romero, E Sola, V Lopez. et al. Treatment with thymoglobulin as the cause of acute demyelinating polyneuropathy in a renal transplant patient. Nefrologia. 2009;29(4):369-70