Materials and methods: KCs were isolated by collagenase digestion and purified by Percoll density gradient centrifugation. Primary cultured KCs were divided into five groups: control, H/R plus 0.1% lipid preconditioning, and H/R plus 0.05%, 0.1% or 0.2% emulsified isoflurane preconditioning groups. H/R was induced by 4 h of hypoxia followed by 6 h of reoxygenation. Reactive oxygen species (ROS) production in the KCs and the concentration of tumor necrosis factor-α (TNF-α) in the KC culture media were measured, and the apoptosis of KCs was assayed concomitantly.

Various methods, including pharmacological treatment, gene therapy and ischemic preconditioning, have been used to ameliorate hepatic ischemia/reperfusion (I/R) injury. In 1986, Murry et al1 demonstrated for the first time that intermittent episodes of ischemia had a protective effect on myocardium that was later subjected to a sustained bout of ischemia. One of the characteristics of ischemic preconditioning is the cross-tolerance phenomenon. In 1997, some experimental studies2 confirmed that isoflurane preconditioning could reduce myocardial infarct size in a dog model of left anterior descending coronary artery occlusion. Isoflurane has also been shown to reduce oxidative stress-induced cell injury.

Kupffer cells (KCs), which are liver-specific tissue-fixed macrophages and a major component of the reticuloendothelial system, phagocytose foreign bodies and produce or secrete various physiological signaling factors, such as reactive oxygen species (ROS), proinflammatory cytokines, chemokines and other mediators, to regulate systemic responses during major stress or sepsis3,4. KCs are activated under I/R stress and are considered to play an important role in I/R injury5.

Inbred male Sprague-Dawley (SD) rats weighing 200-250 g (Experimental Animal Center of the Second Military Medical University, Shanghai, China) were maintained in laminar flow cages in a specific pathogen free animal facility with free access to standard laboratory chow and water before the experiment. This study was approved by the animal care committee at the Second Military Medical University and all experimental procedures were performed according to the Guide for the Care and Use of Laboratory Animals.

An 8% emulsified isoflurane (v/v) solution was manufactured by Huarui Pharmacy (Wuxi, China) according to previously described procedures6,7 and kindly provided by Prof. Jin Liu from the Laboratory of Anesthesiology and Critical Care Medicine, West China Hospital of Sichuan University (Chengdu, China). Briefly, 1.6 mL liquid isoflurane and 18.4 mL 30% Intralipid® (fat emulsion injection, Sino-Swed Pharmaceutical Corp., China) were mixed in a 20-mL glass ampoule, which was sealed using an alcohol blowtorch. The ampoule was then shaken vigorously on a vibrator for 15 min to solubilize the isoflurane as a lipid emulsion. The emulsified isoflurane ampoule was opened just before use, and any residual drug was discarded. Before the experiment, the stability of 8% emulsified isoflurane was verified by gas chromatography. There was no change in isoflurane concentration or generation of lipid droplets over 6 months of storage at room temperature.

Isolation and culture of KCs

KCs were isolated by collagenase digestion8 and purified by Percoll density gradient centrifugation9. Rats were anesthetized with 50 mg/kg pentobarbital intraperitoneally prior to laparotomy. The portal vein was cannulated with a 22 G catheter, and the liver was perfused in situ with 200 ml Ca2+/Mg2+-free Hanks' balanced salt solution (HBSS) containing 10 mM 4-(2-hydroxyethyl)-1-piperazine ethanesulfonic acid at 37℃ and 20 ml/min in a non-recirculating fashion. The liver was then excised and transferred to a 35 mm culture dish, and perfusion was continued ex situ with 50 ml HBSS containing 0.05% IV collagenase and 5 mM 4-(2-hydroxyethyl)-1-piperazine ethanesulfonic acid at 37℃ and 20 ml/min in a recirculating fashion for 20 min. After perfusion, the liver was placed in a culture dish, and non-parenchymal cells (NPCs) and parenchymal cells were isolated from the connective tissue by carefully mincing and gently shaking the liver. The liver homogenate was then filtered through a 70 µm nylon mesh to remove undigested tissue. The cell suspension was centrifuged at 50 g for 5 min three times at 4℃. The supernatant was centrifuged at 800 g for 10 min to obtain hepatic NPCs. The pelleted cells were re-suspended in HBSS and centrifuged at 800 g for 15 min through a 25%/50% Percoll gradient at 4℃.

The interface of the gradient containing KCs was re-suspended in RPMI-1640 containing 10% fetal bovine serum (FBS), penicillin and streptomycin. Cells were then plated in 24- and 6-well culture plates at 1×106/well and 2×106/well, respectively. KCs were cultured in an incubator under a humidified atmosphere of 5% CO2 at 37℃ for 3 h and then washed with PBS. Adherent cells were cultured in an incubator at 37℃ with 5% CO2 for 24 h for later study. The identity of the KCs was confirmed by endogenous peroxidase activity as evaluated by diaminobenziding staining10, which produces a yellow staining and a typical 'fried egg' appearance in KC cells11. The purity of the isolated KCs was more than 85%, and the viability was more than 95%, as measured by the Trypan blue exclusion test.

10 rats were sacrificed and the KCs were harvested separately. KCs from each rat were cultured and divided into the control, lipid, 0.05%, 0.1% and 0.2% group. The KCs of the control and lipid group were preconditioned with the same vender for making emulsified solution, and KCs of the emulsified isoflurane group were preconditioned with a final concentration of 0.05%, 0.1% or 0.2% emulsified isoflurane for 0.5 h and then placed in a plexiglass chamber. The chamber was closed tightly and purged continuously with humidified 90% N2/10% CO2 for up to 4 h at 37℃. After the prescribed duration of hypoxia, the KCs were placed back in a regular incubator for 6 h for reoxygenation. The culture medium and KCs were collected for further analysis.

The concentration of TNF-α in the KC culture medium was assayed by using ELISA kit as per the manufacturer's specifications (Shanghai Senxiong Biotech, China).

The ROS production by KCs was quantified as described previously, with minor modifications12. In brief, KCs were incubated with 100 μM 2',7'-dichlorfluorescein- diacetate (DCFH-DA) in the loading medium in 5% CO2/95% air at 37℃ for 30 min. Then, DCFH-DA was removed, and cells were rinsed with PBS. The fluorescence in each well was measured using a Galaxy Microplate Reader with an excitation wavelength of 485 nm and emission wavelength of 520 nm at 37℃.

Apoptosis was assayed by Annexin-V/PI staining (BioVision Inc. USA). Annexin V staining can identify apoptosis at an earlier stage, and in combination with PI staining makes it possible to identify early apoptotic cells from dead cells. Briefly, treated or untreated KCs were collected, washed in cold PBS, incubated for 30 min at 4℃ in the presence of 10 μl Annexin V-FITC and 200 μl binding buffer (all reagents provided by the manufacturer), and then mixed with 5 μl propidium iodide and incubated for another 5 min at 4℃. Then, 400 μl binding buffer was added to each tube, and the cells were analyzed by flow cytometry. Annexin-V and PI were used to differentiate normal living cells (Annexin V-/PI-), mechanically injured cells (Annexin V-/PI+) and early apoptotic cells (Annexin V+/PI-) from late apoptotic cells (Annexin V+/PI+).

The results were expressed as the mean ± standard deviation. Statistical analysis was performed using one-way ANOVA. A probability level of P<0.05 was considered statistically significant.

TNF-α concentration in the culture medium

A low level of fluorescence was present in the control group, while the intensity of DCF-labeled cells was markedly increased in the lipid group, indicating high ROS production. As shown in Fig. 2, emulsified isoflurane preconditioning attenuated the increase of fluorescent intensity relative to the lipid group. Treatment with either 0.1% or 0.2% emulsified isoflurane significantly inhibited the H/R-induced intracellular accumulation of ROS. 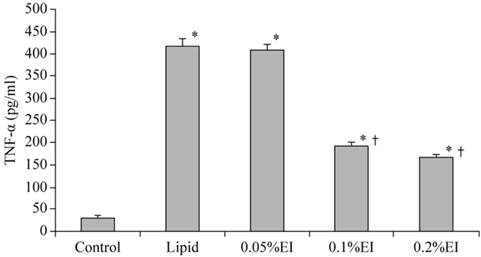 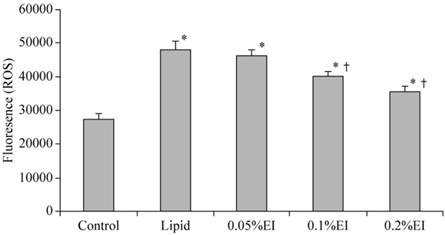 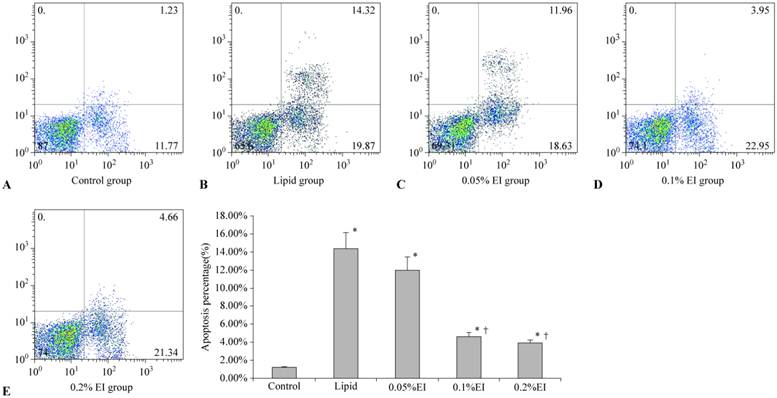 KCs are considered to play a major role in hepatic I/R injury. During the initial stages of reperfusion, KCs are activated and underwent morphologic changes, causing them to protrude into the sinusoids, which contributes to the reduction of blood flow within the sinusoidal lumen18. Activated KCs release large amounts of not only TNF-α and IL-1 but also prostaglandin E and ROS19.

There is evidence suggesting that hepatocyte injury occurs during the relatively hypoxic early phase of IRI. ROS release is one of the earliest and most important events in tissue injury after the reperfusion of ischemic organs19, and it is a major contributor to hepatocyte death during reperfusion. ROS can activate redox-sensitive transcription factors, thereby activating proinflammatory genes and increasing the hepatic damage. Furthermore, ROS may activate calcium-dependent proteases (calpains) and mediate several intracellular processes that result in necrotic or apoptotic cell death. ROS can therefore be considered signaling molecules, which trigger several pivotal mechanisms of reperfusion injury. Consequently, antioxidant strategies appear to be promising for the prevention of hepatic reperfusion injury20.

Peng et al25 demonstrated that Fas/FasL induced KC apoptosis in an experimental pancreatitis model and showed that Fas/Fal may have a protective effect by reducing the number of activated KCs and thus reducing overall cytokine production in the liver. However, Tello et al26 suggested that KC apoptosis could increase the TNF-α concentration in the culture medium, most likely due to cell death rather than the active release or synthesis of TNF-α from KCs. Our results are consistent with their work, demonstrating that emulsified isoflurane preconditioning inhibited KC apoptosis and decreased the TNF-α concentration of the surrounding culture medium.

Taken together, our data show that emulsified isoflurane preconditioning has a protective effect against hypoxia/reoxygenation-induced KC injury, as indicated by the decreased ROS and TNF-α production. This protective effect may be related to the reduction of KC apoptosis. Emulsified isoflurane may be useful in alleviating ischemia reperfusion injury caused by hepatic surgery, transplantation or hemorrhagic shock.

This work was supported by a grant from the Innovation Program of Shanghai Municipal Education Committee. (Grant No. 12ZZ081).