Statins Therapy Can Reduce the Risk of Atrial Fibrillation in Patients with Acute Coronary Syndrome: A Meta-Analysis

Background: It is a controversy whether statins therapy could be beneficial for the occurrence of atrial fibrillation (AF) in acute coronary syndrome (ACS). To clarify this problem, we performed a meta-analysis with the currently published literatures.

Methods: The electronic databases were searched to obtain relevant trials which met the inclusion criteria through October 2011. Two authors independently read the trials and extracted the related information from the included studies. Either fixed-effects models or random-effects models were assumed to calculate the overall combined risk estimates according to I2 statistic. Sensitivity analysis was conducted by omitting one study in each turn, and publication bias was evaluated using Begg's and Egger's test.

Conclusion: Statins therapy could reduce the risk of atrial fibrillation in patients with ACS.

Atrial fibrillation (AF) is a common arrhythmia associated with acute coronary syndrome (ACS) and the estimates were up to 20% in acute myocardial infarction (AMI) patients [1-4]. The ACS patients developed AF may have poor prognosis. Previous studies had showed that ACS patients associated with AF may have longer in-hospital duration, higher rates of stroke, and increase the short and long-term mortality [2, 4-7]. Therefore, the treatment or prevention of AF may improve the prognosis in ACS patients. Accumulating evidences have been demonstrated that statins, hydroxymethylglutary-CoA reductase inhibitors, can reduce the incidence of AF in coronary artery disease (CAD) patients [8-10], nevertheless other studies showed that statins therapy was nearly no beneficial to prevent AF in patients with acute coronary disease [11], isolated coronary artery bypass grafting [12], undergoing cardiac surgery [13]. In order to elucidate whether statins are beneficial to ACS patients complicated with AF, we performed a meta-analysis to clarify this problem through analyzing the currently published literatures.

Note: We searched the references according to the sequence of the number.

With these key words, 1634 abstracts were retrieved. Full text reviews were obtained when the studies had possible relevance to this study. For the unavailable data, we did not contact the authors.

We firstly excluded the reduplicated studies using Endnote software, then screened the studies according to the titles or abstracts. The second screening was preformed based on the full-text reviews. We looked for the studies that met all the specific criteria: (1) the study design was cohort study or randomized controlled trial; (2) the study subjects were the patients with acute coronary syndrome; (3) patients with statins therapy compared to those with non-statins therapy; (4) clinical outcome was occurrence or new-onset atrial fibrillation; (5) the data for extraction in the original article were available. Articles were excluded if they met one of the following criteria: (1) acute coronary syndrome patients with extensive or high dose statins therapy compared to those with traditional statins therapy; (2) patients who were under coronary artery bypass grafting or coronary artery disease; (3) reviews. If one trial had published two or more publications with different durations, we would choose the publication with the longest duration. Two authors (Xue Zhou and Jia Yuan) independently read the titles, abstracts, and/or full texts to determine whether they were satisfied with the inclusion/exclusion criteria (figure 1). For the disagreement or uncertainty, we got to resolve by discussion or consensus of a third reviewer.

Relative ratio (RR) was used to measure the effect size. Heterogeneity test was performed using I2 statistic, which is a quantitative measure of inconsistency across studies [15]. Pooled RR were calculated for statins therapy group versus non-statins therapy group, using either fixed-effects models or random-effects models according to I2 statistic, if I2 is less than 50%, we would choose fixed-effects models; otherwise the random-effects models would be used. The 95% confident interval(CI) was also calculated. Sensitivity analysis was conducted by omitting one study in each turn in order to investigate the influence of a single study on the overall risk estimate and test the stability of the results. Publication bias was evaluated using Begg's and Egger's test. All statistical analyses were performed using STATA version 11.0 (StataCorp LP, College Station, Texas). A p value<0.05 was considered statistically significant, except where otherwise specified.

Check List for Quality Assessment and Scoring of Nonrandomized Studies

The characteristics of the included studies in the meta-analysis 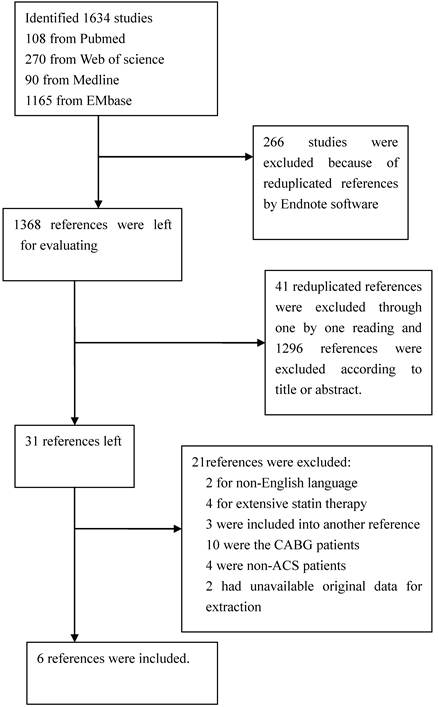 A meta-analysis with data derived from six cohort studies, which applying with statins in patients with ACS or suspected ACS for preventing atrial fibrillation, was conducted. The endpoint was occurrence or new-onset AF. Among the six references, five references were full-text reviews and another one was abstract. Four studies had investigated the effect of statins therapy on occurrence of new-onset AF in ACS patients, another two had described the association between statins therapy and occurrence of AF in ACS patients without AF free in baseline. Of the six eligible trials, 161305 patients were included in this meta-analysis, 77920 (48.31%) patients had taken the statins therapy, 83385 (51.69%) patients had taken non-statins therapy. All six trials reported AF outcomes. Incidence or recurrence of AF occurred in 16176 patients: 7070 of 77920 in patients treated with statins versus 9106 of 83385 in control subjects. The characteristics of these included studies were presented in table 3 and the quality assessment was performed according to NEWCASTLE - OTTAWA QUALITY ASSESSMENT SCALE (Table 4).

Assessment of quality of included studies

Note: For the study by Bang C.N. was only abstract available, we did not get further to assess the quality.

Statins and the risk of atrial fibrillation (AF). Forest funnel showed the association of statins therapy and the risk of AF in patients presented with acute coronary syndrome with random-effects model. RR=relative ratio; CI=confidence interval. 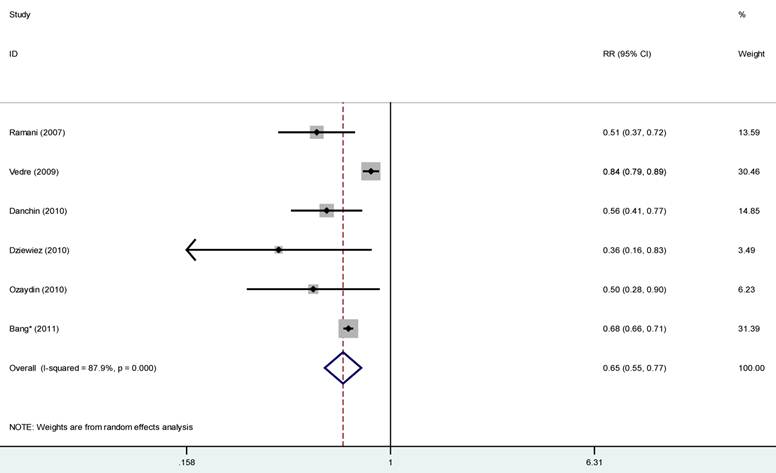 Statins and the risk of atrial fibrillation. Studies with only abstract available were excluded from this analysis, and forest funnel showed the association of statins therapy and the risk of AF in patients presented with acute coronary syndrome. Abbreviations as in figure 2. 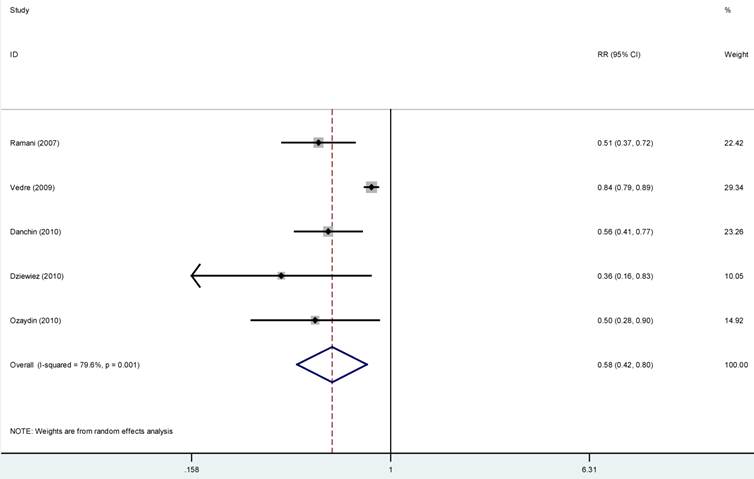 Subgroup analysis was conducted according to the type of AF, and forest funnel showed the association of statins therapy and the occurrence of AF in patients presented with acute coronary syndrome. 0= new-onset AF group, and 1 = recurrence AF group. Abbreviations as figures 2 and 3. 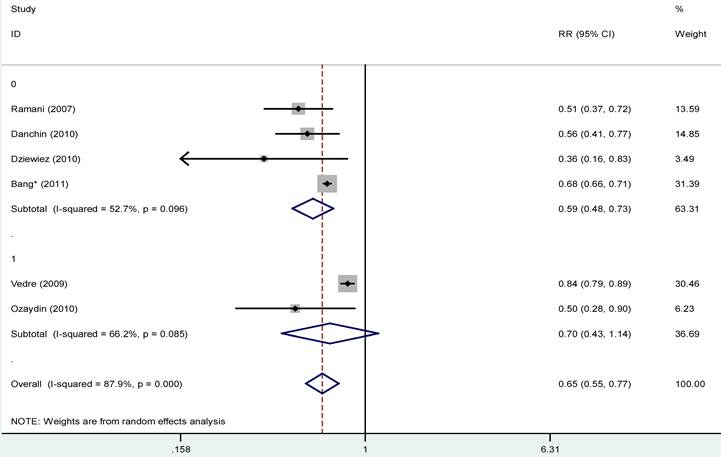 This meta-analysis derived from six cohort studies suggested that statins therapy was associated with a 35% reduction in the risk of new-onset or recurrence AF in patients with ACS compared to those with non-statins therapy, after we excluded the study with only abstract available, the beneficial effect was nearly the same. The reduction effect seemed more advantageous in the prevention of new-onset AF than in the prevention of recurrence AF.

The underlying mechanism behind the protective effects of statin on the risk of developing AF in CHD patients is unclear. Both AF and CHD are an inflammatory condition in which myeloperoxidase (MPO) is known to play a significant role [25, 26]. What is more, in the condition of AF or CHD, patients have increased C-reactive protein (CRP) levels in their blood [27, 28], the concentration of CRP in the blood seems to be associated with the total amount of time that patient experiences AF [29] and directly correlate with adverse effects in CHD patients. Statins can inhibit interleukin-6 (IL-6) and tumor necrosis factor α (TNF-α) production and nuclear factor kappa B (NF- κB) activation, and are anti-inflammatory in nature [30], and they may decrease the production of MPO and MPO-accompanied fibrosis and initiation and progression of AF and atherosclerosis. A systematic literature written by Oliver Adam [31] and a research reported by Reilly SN [32] showed statins can play a role in antiarrhythmic effects through improving endothelial nitric oxide (NO) availability and reducing inflammation, oxidative stress, and neurohormonal activation.

The heterogeneity was observed in the present meta-analysis, sensitivity analysis by omitting every single study was performed to explore the potential source of heterogeneity, but the result did not materially alter the overall combined RR, which means our results are stable. The meta-regression on sample size was performed for the sample size in present meta-analysis ranges from 1000 to 89703, whereas the result showed the sample-size was not the source of heterogeneity (p=0.138). The baseline characteristics of subjects may result in heterogeneity in present meta-analysis: (1)underlying disease associated with heart is an important factor to affect the incidence of AF, for heart related basic disease may lead to the changes of heart structure, which may influence the electrophysiology of heart; (2)the gender is another an important factor, for aged-female is much easier to have CAD and the prognosis may be more poor than aged-male, whereas the amount of women in included studies changes quite a lot, and this may lead to heterogeneity; (3) the basic treatments could also affect the heterogeneity.

It is noteworthy that the results of the study by Bang et al. [21] have not been published in a full text review to date. However results were similar when the study [21] was not included in the present analysis. The substantial heterogeneity was observed in our meta-analysis, although sensitivity analysis and meta-regression were conducted to detect the source of heterogeneity, we could not identify the exact source of heterogeneity. Only GRACE study reported by Vedre et al. [17] had study the effect of statins therapy on death, cardiac arrest, ventricular fibrillation in patients with ACS, the majority of studies included in present meta-analysis were focus on the occurrence of AF, so it is unclear whether the early statins therapy in ACS patients could really improve the prognosis or not, and need more studies to clarify. We do not study the effect of different type and/or does of statins on prevention AF in ACS patients, for the type and/or does of statins in some studies were unclear, we could not make further efforts to identify the association between type and/or does of statins and AF.

This study was partly supported by grants from the National Natural Science Foundation of China (No.81070140) and the project of Chongqing Health Administration (No.2008-2-45).

The authors guaranteed that there are no competing interests within this work.

24. Adabag AS, Nelson DB, Bloomfield HE. Effects of statin therapy on preventing atrial fibrillation in coronary disease and heart failure. Am Heart J. 2007;154:1140-1145