Association between HLA-B*46 Allele and Graves Disease in Asian Populations: A Meta-Analysis

Graves' disease (GD) is a leading cause of hyperthyroidism, which is characterized by diffuse goiter and thyroid-specific auto-antibodies, with/without ophthalmopathy and/or dermopathy [1]. The disease affects 1.0-1.6% of the general population with a strong preponderance of females [2, 3]. Besides the sex difference in GD prevalence, evidence has indicated a prevalence of GD in Asian populations compared to Caucasian populations [4].

The etiology of GD is incompletely understood, but seems to involve complex interactions between predisposing genes and environmental triggers [5, 6]. Genetic studies have shown that the human leukocyte antigen (HLA) region on chromosome 6p21.31 is an important candidate genetic region associated with GD, as the HLA region is highly polymorphic and contains many immune response genes. This region encodes genes that are grouped into three classes: class I genes (HLA-A, HLA-B and HLA-C) class II genes (HLA-DR, HLA-DP and HLA-DQ) and class III genes. Many studies regarding HLA allelic associations with GD have been performed, and different associations of GD and HLA alleles have been reported among diverse ethnic populations. For example, HLA-B*08 (HLA class I), HLA-DR3 and HLA-DQA1*05:01 (HLA class II) are associated with a high risk of GD, and HLA-DRB1*07:01 is a protective allele against GD in Caucasian populations [7-11]. However, the Caucasian GD-associated HLA alleles are absent or occur in low frequencies in Asian populations. In Asian populations, HLA-B*46, HLA-DRB1*08:03, HLA-DRB1*09:01 and HLA-DRB1*14:03 alleles were reported as risk factors of GD [12-25]. However, the results are somewhat contradictory [12-27], which may be due, in part, to the small sample sizes of the studies.

Meta-analysis is an effective statistical tool to combine data from previous studies to provide a more accurate estimate of cohort size effects and reduce the probability of false-negative results [28]. Therefore, meta-analysis of the association between HLA-B*46 and GD in Asian populations is necessary to clarify and evaluate the role of HLA-B*46 in GD.

In the current study, we collected 14 previous studies for a carefully designed meta-analysis to investigate the association of HLA-B*46 with GD in Asian populations and provide a more thorough evaluation of the significance of this association.

All studies included in the present analysis explored the association between HLA-B*46 allele and GD in Asian populations. Sources included MEDLINE, EMBASE, Science Citation Index Expanded (ISI Web of Science) and references of retrieved articles (up to March 2012). The search terms were as follows: 'HLA' OR 'human leukocyte antigen' AND 'Graves' disease'.

To be included in the meta-analysis, studies had to meet all the following criteria: (a) an unrelated case-control design, (b) related to Asian population (c) available serological typing, genotypic number or frequency, and (d) English language. If there were multiple publications from the same group, only the most recent study was included in the analysis. Duplicate reports were deleted.

Two authors who conducted the literature search (Yiping Li and Yufeng Yao) also independently extracted data from the studies. Any disagreement was adjudicated by consensus and consulting another two authors (Ying Zhang and Chunjie Xiao). The authors' names, journals and years of publication, regions of origin, diagnoses criteria of GD, cases and control sizes, and HLA-B*46 antigen or gene frequencies were collected. Characteristics of each study were summarized in Table 1. The antigen frequency (F) was transformed into a gene frequency (f) using the equation:

when only the antigen frequency was provided [29].

Characteristics of case-control studies included in current meta-analysis of the association between HLA-B*46 and GD.

GD, Graves' disease; NA, not available; *the age was the onset of GD.

We compared GD cases with controls using the allelic model for HLA-B*46 (present/absent). The odds ratio (OR) and 95% confidence interval (CI) were calculated to determine the differences in each HLA-B*46 between cases and controls. The χ2-based Q statistic test was used for assessment of between-study heterogeneity [30], which was considered significant at a P-value < 0.10. The inconsistency index (I2) was calculated to evaluate the amount of variation caused by heterogeneity rather than by chance, where higher index values indicated the existence of heterogeneity [31]. Data were combined using fixed-effects (the Mantel-Haenszel method) or random-effects (the DerSimonian and Laird method) models. The fixed-effects model (if P > 0.10) or the random-effects model (if P < 0.10) was used to pool the results. From the individual ORs, a pooled OR was estimated, of which the statistical significance was determined using the Z-test. A P-value < 0.05 was considered statistically significant. Sensitivity analysis was performed to assess the stability of these results. Potential publication bias and small study effect and/or publication bias was estimated by the Begg's funnel plot and Peters' test (A modification of Macaskill's test) [32, 33]. A P-value < 0.05 was considered to represent a statistically significant publication bias. All P-values were two-sided. All meta-analyses were performed using Stata statistical software (Stata/SE 12; Stata Corp., College Station, TX, USA).

Characteristics of including studies

The initial search strategy to identify association studies for GD and HLA yielded a total of 182 potentially relevant references among all the databases, 84 of which were overlapping. As two studies included the same subjects, the one including more samples was chosen for the meta-analysis [15, 16]. A study on Chinese population from Singapore by the same research group [25, 27, 34] was replaced by another one including the largest number of subjects [27] for this meta-analysis. In total, 14 case-control studies of HLA-B*46 allelic polymorphisms with 1743 GD patients and 5689 controls were included [12-14, 16-24, 26, 27]. All subjects of the included studies were composed of Asian populations. Among the 14 studies, seven were from Chinese populations, six from Japanese populations and one from a Korean population. Of all included studies, 10 clearly noted the diagnosis of GD, which was based on clinical symptoms and biochemical hyperthyroidism and the remaining four did not note the diagnostic GD standard, but included cases considered as GD and in two studies, patients received treatment for GD (Table 1).

Association of the HLA-B*46 allele with GD

The ORs and 95% CIs of the association of GD with HLA-B*46 in each of studies are shown in Fig. 1. The heterogeneity test showed that there was significant heterogeneity among the results of individual studies (Pheterogeneity < 0.01 and I2 = 68.0% for HLA-B*46). Therefore, the random effect model (D-L heterogeneity) was used for calculating the pooled ORs and 95% CIs. Overall, there was a trend toward an increased risk of GD among HLA-B*46 positive cases compared with those HLA-B*46 negative (OR = 2.48; 95% CI 1.96-3.13, P < 0.01). The meta-analysis standard forest plots are shown in Fig. 1.

Several studies reported that the variation of HLA class I could trigger autoimmunity through presenting microbial antigens that are sufficiently similar to self-antigens to nucleated cells and activated autoreactive T cells that can cross-react with self-antigens [26-28]. For example, Yersinia enterocolitica, which is a key environmental trigger for GD, has been postulated to play a role in GD induction via molecular mimicry [26-28]. In addition, other studies have reported that the upregulation of HLA class I molecules on thyroid cells, including HLA-B and HLA-C in response to immune cell infiltration of the thyroid gland, may be one of the earliest features of autoimmune attack in GD [35]. The association studies indicated that the HLA-B*46 was associated with GD in Asian populations. To evaluate the role of HLA-B*46 in GD, we performed a meta-analysis on the association of HLA-B*46 with GD in Asian populations and our results indicated a positive association (OR = 2.48; 95% CI 1.96-3.13).

Individual and pooled ORs and 95% CI for HLA-B*46 (positive vs. negative) for all studies. 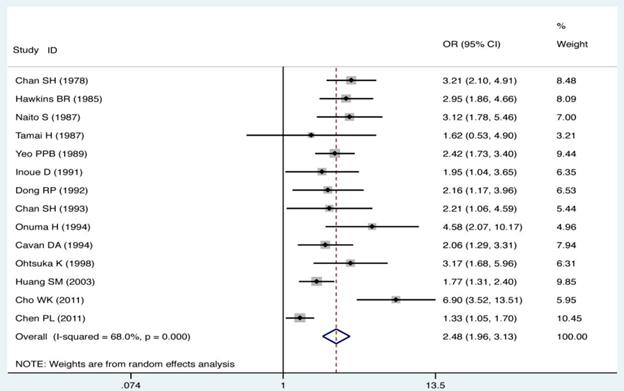 Begg's funnel plot analysis for the comparison of the HLA-B*46. P value of Begg's test was 0.443 (continuity corrected). 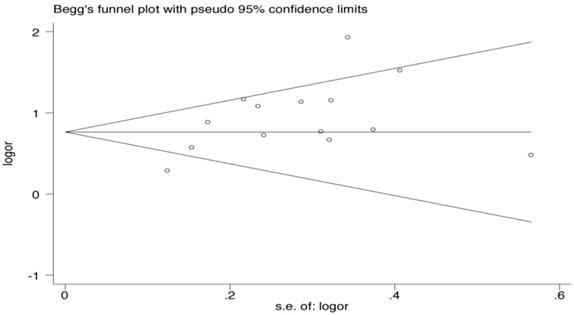 Sensitivity analysis was performed by omitting one study at a time and calculating the pooled ORs for the remaining studies. 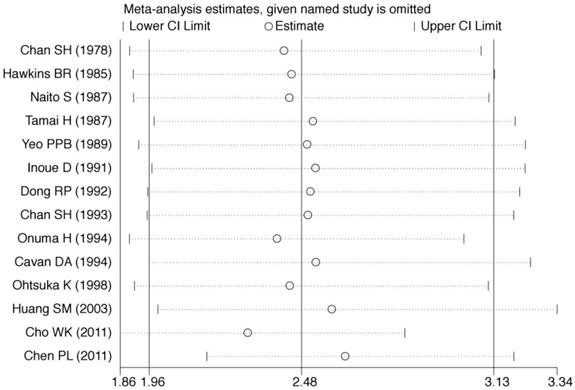 Linkage disequilibrium (LD) refers to the non-random association between alleles at adjacent genetic loci. LD patterns across the human genome varies markedly between regions and populations [37-39], and is currently a subject of intense interest both as a mapping tool for the identification of disease susceptibility genes and for what they may reveal about a population's demographic history and the selective forces acting thereon. The global LD characteristics between HLA class I and II genes have been investigated for over 30 years [40-43], and the term 'ancestral haplotype' has been coined to describe conserved, population-specific haplotypes [44]. For example, in European populations, the HLA-B*08 and HLA-DRB*03 alleles had a stronger linkage disequilibrium and formed the ancestral haplotype 8.1 [45]. Interestingly, many studies reported that HLA-DRB*03:01 was strongly associated with GD from genetic studies [46]. Therefore, it is possible that HLA-B*46 was in a LD with a polymorphism locus of a HLA class II gene, which might influence professional antigen presenting cells through aberrant expression of HLA class II molecules on thyrocytes. However, in Asian populations, the HLA-B*46 are partly in LD of the DRB1*08:03, HLA-DRB1*09:01 and HLA-DRB1*14:03 alleles [47-49]. It was also interesting to find that DRB1*08:03, HLA-DRB1*09:01 and HLA-DRB1*14:03 were associated with GD in Asian populations [14, 20, 22, 50]. Future studies should focus on which loci are attributable to GD maintenance and development.

In the present meta-analysis, heterogeneity was a potential problem when interpreting the results. Statistically significant heterogeneity was observed between studies for HLA-B*46 (Pheterogeneity < 0.01, I2 = 68.0%). Between-study heterogeneity may be due to the different geographical regions of subjects. All subjects in current meta-analysis study were Asians, but from different regions and not a genetically homogenous group. Thus, this might explain the significant between-study heterogeneity. The differences in age and gender distributions among the included studies, and differences in the sample content and the methods of HLA typing HLA might also have contributed to the heterogeneity. In addition, inconsistency in inclusion criteria to be case population among studies might be another reason of heterogeneity, for five of fourteen studies just mentioned the cases were Graves' disease cases, not included the diagnostic criteria [12, 14, 18, 22, 27].

There were some limitations to the meta-analysis in the current study. First, it is possible that a few studies, showing no association between HLA-B*46 and GD, were not included in current meta-analysis, because some published studies did not report their HLA-B*46 allele data [51, 52]. Secondly, three studies used genotyping methods for HLA typing, while 11 studies used serological methods due to the limitations of immunological detection technology at the time of the studies. The different typing methods (serological and genotyping methods) might lead to a heterogeneity in current meta-analysis.

In summary, in the present study we performed a meta-analysis on the association of GD with the HLA-B*46 in Asian populations. Our results indicated a significant association between GD and HLA-B*46 (OR = 2.48). Confirmation of the HLA-B*46 association with GD in Asians is fundamental for studies on GD complications, such as periodic paralysis, ophthalmopathy, or GD recurrence. A previous study reported that HLA-B*46 was associated with GD complications in Asians, such as periodic paralysis [12]. In addition, identification of population-specific HLA alleles of GD is a critical first step for individualized medicine in the future.