Recently, arterial pulse waveform analysis has been proposed for monitoring of cardiac output (CO) and SVV (FloTrac/Vigileo; Edwards Lifesciences, Irvine, CA, USA) [12-15]. The accuracy and reliability of CO has been evaluated [16, 17], while the accuracy and clinical applicability of SVV measured with this system have not been fully evaluated [18-25]. The present study was performed to investigate the value of SVV in predicting fluid responsiveness in patients receiving gastrointestinal surgery in the presence of ventilation with intermittent positive-pressure ventilation (IPPV) mode, and conventional/low tidal volume.

Continuous CO was acquired with the FloTrac/Vigileo system by analyzing the arterial pulse wave following semi-invasive arterial catheterization without pulmonary artery catheterization or calibration with another method, which can monitor CO, CI, SV, SVI and SVV. With a CVP catheter, its signal may be interfaced with the Vigileo, allowing for the calculation of SVR and SVRI. When used with a central venous oximetry catheter, the Vigileo also provides continuous central venous oxygen saturation [15].

The system calculates the arterial pressure using the arterial pulsatility (stand deviation of pressure wave over a 20-s interval), resistance and compliance, according to the following general equation: SV=K×Pulsatility, where K is a constant quantifying arterial compliance and vascular resistance, and pulsatility is proportional to the standard deviation of the arterial wave over a 20-s interval. K is derived from patient characteristics (gender, age, height and weight) according to the method described by Langewouter et al [26], as well as the characteristics of waveform (e.g., skewness and kurtosis of individual waves). This calibration constant is recalculated every minute.

SVV represents the variation (as a percentage) of SV during the ventilation cycle and is assessed with following equation: SVV (%) = (maximum SV-minimum SV) / mean SV, where the maximum and minimum SV are mean values of the four extreme values of SV during a period of 30 s, and the mean SV is the average value for this time period.

Baseline haemodynamic measurements were recorded 10 min after endotracheal intubation. On completion of baseline measurements and prior to any surgical intervention, volume replacement was performed with 6% hydroxyethyl starch solution (mean molecular weight, 130,000 d/mean degree of substitution, 0.4; Voluven; Fresenius Kabi; Beijing, China) at 7 ml/kg in 30 min. All haemodynamic measurements were re-detected immediately. Blood gas analysis was done during the study period, and red blood cells were transfused to keep hematocrit no less than 90 g/L if necessary.

All haemodynamic variables were recorded as mean of three repeated measurements. Body surface area was calculated with the “du Bois formula” (body surface area=body weight [kilograms]0.425× body length [centimeters]0.725×71.84) [27]. Statistical analysis was performed using SPSS version 13.0 (SPSS; Chicago, IL). A student t test was used for comparison of haemodynamic data before and after fluid infusion. A Pearson`s correlation analysis was employed for evaluate the correlation between SVI and other haemodynamic variables. Prediction of fluid responsiveness with SVV and standard preload indexes was tested by calculating the area under the receiver operating characteristic (ROC) curve (AUC) for a SVI increase of ≥ 25% (AUC =0.5: no predictive value; AUC = 1.0: best predictive value). Furthermore, regression analysis was performed for preload variables and SVI related to the fluid infusion. A value of P<0.05 was considered statistically significant. Unless otherwise stated, data are presented as mean ± standard deviation (SD).

Biometric variables of patients in both groups at baseline. 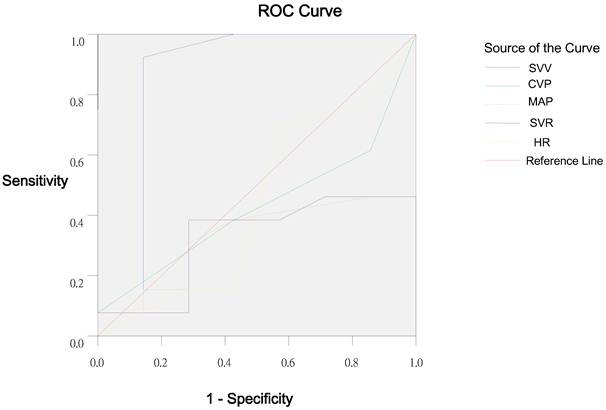 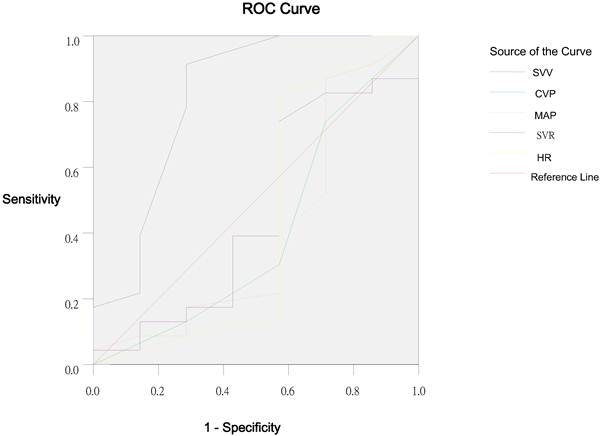 SVV measured by FloTrac/Vigileo system was comparable predictor of changes in SVI following volume replacement therapy in patients receiving gastrointestinal surgery in the presence of ventilation with conventional tidal volume and was a predictor of fluid response in these patients undergoing ventilation with low tidal volume. The conventional static preload variables assessed in this study, such as CVP, failed to predict the fluid responsiveness.

To maintain the best volume state is one of important factors to keep favorable organ perfusion and provide optimal oxygen supply, the precondition of which is to evaluate and predict the volume state accurately. Transoesophageal echocardiography has been used to evaluate the cardiac function and volume state [28], but it is expensive, complicate and difficult to operate and unable to continuously monitor. Variables, such as blood pressure and urine volume, are insensitive because of the influence of vasoactive agents and diuretics. CVP and PAWP can only evaluate volume state indirectly. These variables are often influenced by the general anesthesia agents and vasoactive agents. Thus, it is imperative to develop a variable which can evaluate the volume state of patients easily and accurately.

At present, SVV can be monitored with the PiCCO system and FloTrac/Vigileo system. PiCCO system, which requires transpulmonary thermodilution [29], is invasive and requires the venous access and balloon flotation of the catheter through the right side. Accordingly, there are complications associated with detection with this system, and some are even fatal [30-32]. Furthermore, this system requires an elaborate protocol for intermittent injections into the pulmonary artery catheter for thermodilution. FloTrac/Vigileo system based on analysis of the systemic arterial wave is a semi-invasive method, and does not require pulmonary artery catherization or calibration with another method.

SVV used for haemodynamic monitoring to guide the fluid supplement in patients receiving mechanical ventilation is based on the heart-lung interactions during the mechanical ventilation [33-36]. Respiratory-induced changes in the left ventricular preload result in cyclic changes in the left ventricular SV and arterial pressure. In the presence of hypovolaemia, the left ventricle usually operates on the ascending part of the Frank-Starling curve. Thus, changes in the SV should be more pronounced when compared with that at normovolemia. SVV and the surrogate variables systolic pressure variation (SPV) and pulse pressure variation (PPV) have been studied previously in patients receiving brain surgery, critically ill patients after cardiac surgery and those suffering from septic shock [5-8]. SVV, SPV and PPV are highly sensitive in predicting the fluid responsiveness under these conditions. Thus, dynamic preload variables were considered to be important in guiding the fluid and catecholamine therapy in critically ill patients.

However, SVV depends not only on the cardiac filling status but the changes in intrathoracic pressure associated with the tidal volume [37, 38]. It has been demonstrated that accurate prediction of fluid responsiveness by SVV is feasible when tidal volume is 10-15 ml/kg [5-7]. In contrast, Wiesenack and colleagues did not find the predictive value of SVV in patients receiving cardiac surgery in the presence of ventilation with tidal volume of 10 ml/kg in a study on the volume challenge with colloid solutions [39]. However, the interpretation of these results is difficult as variables reflecting baseline cardiac preload, such as ITBI and LVEDAI, and the degree of hypovolaemia, were not given [39]. In addition, there was relatively wide variation in baseline SVV, suggesting a heterogeneous patient population. However, it remained unclear whether SVV was a reliable predictor of fluid responsiveness during mechanical ventilation with low tidal volume.

In the present study, the role of SVV measured by FloTrac/Vigileo system in prediction of fluid responsiveness was first evaluated in patients receiving gastrointestinal surgery in the presence of ventilation with IPPV and conventional tidal volumes (8 ml/kg). Results suggest that the changes in SVI were significantly correlated with the changes in SVV and CVP, while the changes in SVI were not related to the changes in HR, MAP and SVR. Changes in SVI were significantly correlated to the SVV before volume replacement, while no correlation was found between the changes in SVI, HR, MAP, CVP, and SVR before volume replacement. Both CVP and SVV can evaluate the volume state, but only SVV can predict the fluid responsiveness under this condition. AUC can reflect the diagnostic value of variables [40]. The analysis of ROC curve suggested that SVV was a better variable in the evaluation of volume state than the HR, MAP, CVP, and SVR. SVV of 9.5% or higher could predict a SVI increase of ≥25% as a response to volume replacement with a sensitivity of 100% and a specificity of 57.1%, which is in accordance with the results from the PiCCO system [9-11,41].

Mechanical ventilation is a basic way for oxygen supply under the general anesthesia, but it may cause ventilation induced lung injury (VILI). Ventilation with low tidal volume is one of important methods to avoid or reduce VILI [42]. The normal tidal volume of mammalians is 6.3 ml/kg [43]. Thus, in the present study, tidal volume was set at 6 ml/kg in the IPPV mode, and whether SVV can predict the fluid responsiveness was evaluated under this condition in patients receiving gastrointestinal surgery, which is more clinically important than the conventional tidal volume. Results showed that the changes in SVI were significantly correlated to the changes in SVV and CVP when the ventilation was performed with low tidal volume, whereas the changes in SVI were not related to the changes in HR, MAP and SVR. Changes in SVI were significantly correlated to SVV before volume replacement, while no relationship was found between the changes in SVI and HR, MAP, CVP and SVR before volume replacement under this condition. There was no statistical difference compared with Group C. The ROC suggested that SVV was a better variable for the evaluation of volume state than HR, MAP, CVP and SVR. SVV of 9.5% or higher could predict a SVI increase of ≥25% as a response to volume replacement with a sensitivity of 91.3% and a specificity of 71.4%. These findings were similar to those in the study of Rex and colleagues in which PiCCO system was also used for monitoring [11].

The normal range of SVV under controlled ventilation is less than 10-13%. With respect to the use of SVV assessed by FloTrac/Vigileo system to guide the fluid therapy, the following factors and limitations have to be emphasized: 1) Mechanical ventilation: only patients mechanically ventilated in fixed respiratory frequency and tidal volume of ≥6 ml/kg can use SVV. It is infeasible for patients with spontaneous breath or irregular tidal volume. 2) PEEP: SVV will increase with the increase in PEEP. 3) Airway pressure and intrathoracic pressure. 4) Arrhythmias: the occurrence of arrhythmias or alterations of myocardial contractility (including that after pharmacologic treatment) may render these SVV estimates unreliable. 5) Vasoactive agents: Vasoactive agents, especially β-receptor blockers, vasoconstrictors and vasodilators, influence SVV significantly. 6) General anesthetics: General anesthetics, such as sevoflurane, propofol, fentanyl, and etomidate, can influence SVV via the circulatory inhibition. 7) The interference with arterial waveform, surgical operation, artery catheter and other during the surgery may influence the accuracy of SVV. Thus, in fully sedated patients with mechanical ventilation, sinus rhythm, or pacing in a fixed mode and unchanged catecholamine management are prerequisites for proper use of this haemodynamic monitoring tool.

Some limitations of this study have to be addressed. First, the assessment of SVV with FloTrac/Vigileo system has not yet been proven by direct comparison with other techniques. However, our findings are strongly supported by some studies in which SVV was assessed with PiCCO system and found to be a favorable predictor of fluid responsiveness [9-11, 41]. Second, our patients were hypovolemic at baseline because of pre-operative fasting, gastrointestinal preparations and application of general anesthetics. The predictive value of SVV was not evaluated in normovolemic or even hypervolemic patients with SVV within or below the normal range. However, it seems likely that the present setting is close to most common clinical situations, with hypovolemia as the major cause of arterial hypotension. Moreover, during measurements and fluid trial, manipulations were not allowed, ie, table-tilting maneuvers, catheter insertion, or surgical interventions were strictly avoided. These conditions rarely apply to clinical situations, when the decision on fluid replacement therapy has to be made.