Gastric cancer is the third most common cancer and is the second leading cause of cancer deaths worldwide [1]. In spite of advanced chemotherapy and radiotherapy, the only curative treatment for gastric cancer is surgical resection of primary tumors with appropriate lymphadenectomy since trials of neoadjuvant therapy have for the most part been disappointing [2]. Some patients with gastric cancer, even with the same TNM stage, have different prognoses and treatment responses. Therefore, recent molecular studies have provided a better understanding of the biology of gastric cancer and have identified multiple factors responsible for the modulation of tumor progression, invasion and metastasis formation.

Trefoil peptide family (TFF) domain peptides, characterized by the presence of a conserved 41-to 42-amino acid residue trefoil domain with a distinctive structure, are small and secreted proteins that are co-expressed with mucins by the epithelial cells lining the gastrointestinal tract [3]. In humans, three members of the TFF have been identified and these functions are thought to center on their role in mucosal protection, namely interactions with mucins and stimulation of cell motility [4]. Because the expression of these peptides in the gut occurs in a tissue- and cell-specific manner, TFF1 and TFF2 are predominantly expressed in the gastric mucosa, with TFF1 being restricted to the foveolar epithelial cells of gastric body and antrum and TFF2 to mucous neck cells and the deep pyloric gland [3]. In contrast, TFF3 or intestinal trefoil factor (ITF) is expressed in the goblet cells of the intestine [5] and shows limited expression in the breast, salivary gland, hypothalamus, and respiratory tract outside the GI tract [6-9]. Although TFFs have been involved in the protection of the gastrointestinal tract against mucosal damage [10, 11], recent compelling evidence has emerged from experimental and clinical studies indicating a pivotal role of TFFs in the oncogenic transformation, growth, and metastatic extension of common human solid tumors [4, 6, 12-18], including gastric cancer [19, 20]. Moreover, serum levels of TFFs in patients with several cancers have been reported as useful biomarkers for predicting the presence of cancer [21-24].

A total of 292 cases of primary gastric adenocarcinoma were acquired from the Catholic University Hospital, Seoul, Korea from January 2005 to May 2010. Additional 20 cases of non-cancerous gastric mucosa were included. The study protocol was approved by the Institutional Review Board of St. Vincent's Hospital at The Catholic University of Korea (IRB No. VC12TISI0166). All of these patients had undergone a complete tumor resection. None of the patients had received preoperative chemotherapy or radiation therapy. Tumors were divided into two histological subgroups: a differentiated type consisting of papillary and tubular adenocarcinomas, and an undifferentiated type consisting of poorly differentiated adenocarcinomas, signet ring cell carcinomas, and mucinous adenocarcinomas [25]. All patients were staged at the time of their surgery, in accordance with the guidelines of the American Joint Committee on Cancer Staging system [26]. After surgery, clinical follow-up data for all patients were obtained. Survival time was measured as the time from the date of the initial surgery to the date of death. Patients that died as a result of surgery or from other causes were excluded from the study.

Formalin-fixed paraffin-embedded tissues were obtained from subjects. Using H&E-stained slides, a representative tumor site was chosen and the site corresponding to the confirmed tumor site in the paraffin block was marked. Areas with necrosis, hemorrhage, and artifacts were excluded. Single core biopsy specimens of 2 mm in diameter were taken from the representative regions (SeongKohn Trader's Co, Seoul, Korea), placed on a TMA mold with 60 pores, and re-embedded with paraffin. TMA blocks were prepared as 4-μm-thick sections and were stained with the H&E staining methods. The tissues were then examined to determine whether the appropriate tumor site had been selected.

All immunostained slides were evaluated independently by two independent pathologists. Evaluation was done twice without the evaluator having any knowledge of the specific diagnosis or prognosis for each individual case. Immunohistochemical staining was re-evaluated for cases showing disagreement between pathologists. Two pathologists reviewed the cases together, and reached an agreement for samples with inconclusive results.

Tumor cells showing cytoplasm stained in brown under light microscopy were considered positive. Cells were scored broadly, according to the staining intensity and the percentage of positive tumor cells [27]. Staining intensity (i) were scored as follows: absence of staining, 0 point; weak staining, 1 point; moderate to strong staining, 2 points. The percentage of positive tumor cells (ii) was semiquantitatively divided into three grades: no positive staining or <10% of tumor cells with positive staining, 0 point; 10-50%, 1 point; >50%, 2 points. The score for each section was measured as (i) × (ii), and the result was defined as 0 (score 0), 1+ (score 1), 2+ (score 2), and 3+ (score 4). For statistical analysis, the expression of TFF1 was grouped into preserved (3+) and reduced (0, 1+, 2+) expression; the expression of TFF3 was grouped into low (0, 1+, 2+) and high (3+) level expression.

Associations between categorical variables were analyzed using the SPSS software package, version 13.0 (SPSS Inc., Chicago, IL USA). Two-sided P values were determined via Chi-square tests. Patient's overall survival was analyzed using the Kaplan-Meier method with the use of the log-rank test for univariate analysis. The Cox proportional hazards model was used for multivariate analysis of the factors that were determined to be significant for overall survival by univariate analysis. For all analyses, the level of significance was set at p< 0.05.

Correlation between expression TFF1 and TFF3 and clinicopathological parameters.

Expression of TFF1 and TFF3

We found TFF immunostaining in every case of normal gastric mucosa (20 cases). TFF1 expression was seen throughout the foveolar and glandular epithelium of the mucosa and the intestinal metaplastic epithelium (Fig. 1). On the other hand, TFF3 was not detected in the normal gastric foveolar epithelium. However, intestinal metaplastic epithelium was always positive and occasionally, mucosal cells in the lower half of the fundic glands were weakly positive (Fig. 1). In cancer tissues, TFF1 and TFF3 immunoreactivity was found exclusively in the cytoplasm of cancer cells. Of 292 gastric adenocarcinoma cases, 135 cases (46.2%) showed preserved TFF1 expression, but 157 cases (53.8%) showed reduced TFF1 expression (Fig. 1). With regard to TFF3, 115 cases (39.4%) exhibited rare TFF3 staining (0). A total of 11 (3.8%), 37 (12.7%) and 129 (44.2%) cases had 1+, 2+, and 3+ staining for TFF3, respectively. 129 (44.2%) tumors had a high level of expression under the classification of low (0, 1+, 2+) and high (3+) levels of expression (Fig. 1). 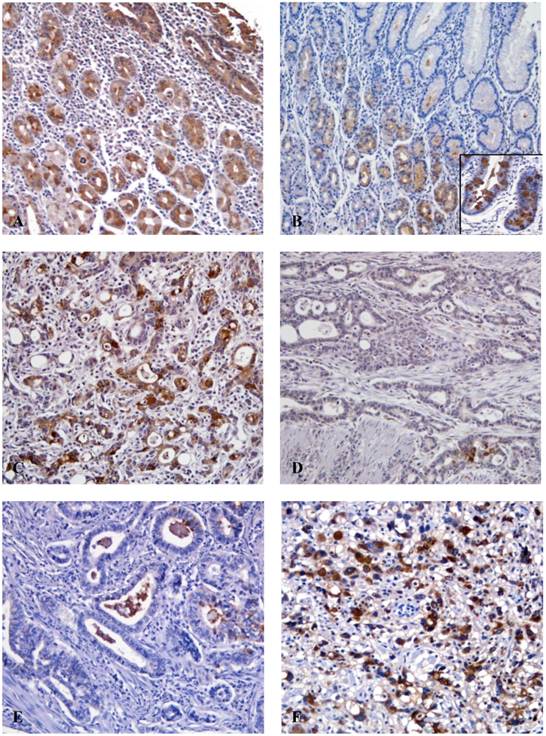 Relationship between the expression of TFF1 and TFF3 and clinicopathological variables

Results from the analysis of correlation between the expression of TFF1 and TFF3 and clinicopathological variables are presented in Table 1. Regarding the

In this study, we determined the expression of TFF1 and TFF3 in a large series of human gastric adenocarcinomas and hoped to achieve a more precise understanding of the associations of these protein expressions with clinicopathological characteristics including patient survival.

TFF1 or pS2 was first identified by virtue of its regulation by estrogen in breast cancer cells [28] and is expressed in a variety of carcinomas including breast cancer [12, 29-31]. With regard to gastric carcinogenesis, TFF1 knockout mice develop gastric adenomas and carcinomas [32], and TFF1 is markedly down-regulated in human gastric cancer [19, 20, 33, 34], suggesting that TFF1 is a tumor suppressor for human gastric cancer. In our study, we found that normal gastric tissues expressed TFF1 in all cases, however, 53.8% of gastric cancers showed reduced TFF1 expression, a frequency that is close to previous reports [33, 35, 36].

Regarding the association between TFF1 expression and clinicopathological features, we found no statistically significant associations between a variety of clinicopathological indicators for poor prognosis and patient survival. Similar to our results, Muller et al [33], Machado et al [34], and Wu et al [36] found the lack of correlation between TFF1 expression and patient survival. However, Suarez et al [40] reported that high intratumoral TFF1 levels were significantly associated with unfavorable outcome. Therefore, further studies are warranted to examine the clinical significance of TFF1 and its usefulness as a prognostic marker.

TFF3 is upregulated in most human malignancies including primary gastric cancer [6, 18-21, 24]. Moreover, its expression is correlated with a highly aggressive phenotype and poor prognosis [16, 21, 24, 27]. Previous studies from several researchers have reported that the oncogenic potential of TFF3 is attributed to cell proliferation [41], inhibition of cell adhesion [17], blocking apoptosis [14, 42], invasion [13], and angiogenesis [15, 43]. In the present study, we found that 60.6% of gastric cancer expressed TFF3, which is consistent with previous reports [20, 25]. We also found high TFF3 expression in cases with undifferentiated type and diffuse type. According to histogenesis in gastric cancer, high TFF3 expression is expected in gastric cancers with differentiated type and intestinal type, because TFF3 is strongly expressed by the goblet cells in the normal intestine and in the intestinal metaplastic epithelium of the stomach, which was shown in previous studies as well as our present study [25]. However, our study showed an opposite result, which may show that undifferentiated type (diffuse type) carcinomas arise mainly from the normal gastric mucosa and the change from gastric to intestinal phenotype occurs with time [25, 38].

Early gastric cancer (EGC) is defined as GC confined to the mucosa and/or submucosa irrespective of lymph node metastasis, according to the Japanese Classification of Gastric Carcinom (JCGC) [44]. In spite of the very favorable prognosis of EGC, recurrence and second primary cancers are present in certain patients after curative surgery. Therefore, studies on prognostic factors in EGC enable us to provide a more tailored follow-up schedule and treatment for high-risk patients. In accordance with this point of view, when we analyzed the association between TFF3 expression and patient survival in patients with EGC, we found that patients with high expression of TFF3 had a lower survival rate than those with low expression of TFF3 by univariate analysis, although it lost significance in multivariate analysis. Next, we also analyzed the relationship between the combined expression of TFF1 and TFF3 and overall survival because researchers had shown that induction of TFF3 together with the progressive loss of TFF1 and TFF2 is possibly involved in the early stage of the multi-step gastric cancer pathway [20]. Interestingly, we found that the combination of reduced TFF1 expression and high TFF3 expression is an independent poor prognostic factor in patients with EGC, which is a remarkable result in our study. This suggests that high TFF3 expression may play a role in tumor progression associated with reduced TFF1 expression in patients with EGC.

This study was supported by the 2011 Research Grants from St. Vincent's Hospital.