Interventions/Methods: We designed Hb-DHS and DHS devices appropriate to the femoral neck and head of experimental animals and used them in eight pigs (4-month-old, male or female, 30-40 kg/each). Under anesthesia, we induced medium neck type, Garden III type femoral neck fractures in each pig with fracture gaps of 0.5 mm and then fixed each left femur with Hb-DHS and each right femur with DHS. We assessed the animals radiographically and by postmortem visual appraisal of evidence of bone healing 8 and 16 weeks postoperatively.

The main purpose of this study was to design a new type of internal fixation device that fixes femoral neck fractures strongly and uses autogenous bone grafts to reduce the incidence of delayed bone union, nonunion and osteonecrosis.

In collaboration with Xiamen Double Engine Medical Material (Xiamen, China), we designed the Hb-DHS and obtained a patent for it (patent number: 201110146729.6). This device is made of titanium alloy and divided into head, middle and end sections. The head section, which is threaded and has some holes in it, is used to fix the femoral head; autogenous bone graft is inserted into the middle section, which has a flabellum-like-cavity; and the end section is inserted into a 135 ºangle plate.

All experimental animal procedures were approved and in accordance with the guidelines of the Institutional Animal Care and Use Committee of the authors' institution. We selected eight 4-month-old pigs (either male and female, weighing 30-40 kg each) and maintained them in our experimental animal center for 1 week to acclimate to the diet, water, housing, and 12/12 hours light/dark cycle. We then performed three-dimensional CT scans on these animals and made hip models to assist the surgical procedure.

The authors performed all surgeries under basic anesthesia (xylazine 0.1 mL/kg compounded with ketamine 0.1 mL/kg im).We used the classical Watson-Jones approach, peeled back the connective and muscular tissue, exposed the greater trochanter and hip joint capsule and opened the hip joint capsule to expose the femoral neck. Then we severed the femoral neck with a chisel to create a model fracture (medium neck type, Garden III type, fracture gap 0.5 mm). Next, we temporarily fixed the head and the neck with a 1.5 mm diameter Kirschner wire and took X-rays. Then we implanted a bone graft from the ipsilateral ilial tuberosity (without any complications) into the flabellum-like cavity of a Hb-DHS and fixed the left femurs with a Hb-DHS and the right femurs with a DHS. Postoperatively, all experimental pigs received routine care and im penicillin (800 000 units) for 7 days to prevent incision infection. They were housed separately for 5 days, and then in groups.

In weeks 8 and 16 postoperatively, we took plain X-rays and performed CT scans of both hips and used them to assess bone healing according to the Lane-Sandhu score[4] (Table 1), percentage of trabecular bone volume (Vp) and bone mineral density (BMD). The Vp was calculated by the formula Vt/(Vt + Vm), where Vt is the value within the femoral neck and Vm that outside the femoral neck. The BMD was calculated by automatic analytical software based on the CT scan. The plain X-ray films were taken with equipment at a voltage of 55 kV, course of 1 second, current of 100 mA, and a distance between ball tube and sample of 80 cm. The CT scanner was a Siemens Somatom Sensation 64 CT 2007 (Erlangen, Germany) with a voltage of 120 kV, course of 1 second, current of 180 mA, collimation of 0.6 mm × 64, tomoscan thickness of 3 mm, tomoscan distance of 3 mm, pitch of 0.9, restitution thickness of 0.75 mm, and spacer of 0.75 mm.

Because there is no callus formation in secondary bone healing of femoral neck fractures, we used the visibility of the fracture line to evaluate differences in bone healing.

In the 8th and 16th postoperative weeks, after performing X-ray and CT examinations, we bled the animals to death under basic anesthesia (xylazine 0.1 mL/kg compounded with ketamine 0.1 mL/kg im) and then visually assessed the blood supply of the femoral head, the state of the grafted bone in the flabellum-like cavity of the Hb-DHS and trabecular bone formation.

We analyzed the data with SPSS 16.0 statistical software and used the Wilcoxon rank sum test to analyze quantitative data that did not have normal distribution and homoscedasticity. We defined P < 0.05 as statistically significant.

Results of Lane-Sandhu Score in Hb-DHS Group and DHS Group.

Results of Vp and BMD in Hb-DHS Group and DHS Group. 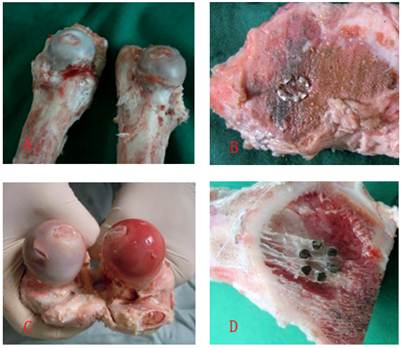 The main causes of femoral neck fractures in young adults are high energy injuries sustained in traffic accidents, falls and so on[5]. Various factors, including specific characteristics of the anatomical structure of the femoral neck, may contribute to delayed bone union, nonunion (about 15%) and femoral head necrosis (20-30%). These factors include delays in hospitalization, unconsciousness, open versus closed reduction and internal fixation, quality of internal fixation, lack of suitable equipment, femoral neck bone quality, fracture type, creeping substitution of bone, increases in capsular and intramedullary pressure, and reduction in local blood supply[5-7].

In consideration of the above, our research group designed a new screw and collaborated with Xiamen Double Engine Medical Material to produce it. The device is an improvement of DHS; we named it Hb-DHS. The head section of the Hb-DHS is threaded, has some holes and is used to fix the femoral head, possibly with less capsular and intramedullary pressure than there is with the DHS. The middle section of the Hb-DHS has a flabellum-like cavity into which iliac autogenous bone graft is inserted to reduce bone necrosis, promote creeping substitution of bone and, to some extent, augment bone trabecular volume and BMD. The end section of the Hb-DHS inserts into a 135 º angle plate.

Compared with the Hb-DHS, the DHS probably does not reduce capsular and intramedullary pressure, does not provide for iliac autogenous bone graft and has various complications including coxa vara, screw cut out or loosening, and plate rupture[20, 21], which can endanger the femoral head, reduce bone trabecular formation, exacerbate bone ischemia and result in bone necrosis. The Hb-DHS may also have some complications, including loosening of the screw thread, lock nail and angle plate, screw cut out, and plate rupture. However, the Hb-DHS is unique in having holes on the screw thread in the head and a flabellum-like cavity in the middle section that might somewhat reduce capsular and intramedullary pressure. The autogenous bone graft in the flabellum-like cavity may promote trabecular bone formation, increase bone mineral density and creeping substitution, and decrease the healing time. However, once bone healing has occurred, Hb-DHS may have some drawbacks in that it would be more difficult to remove than other internal fixation devices and may cause electrolytic or anaphylactic reactions.

We believe that the Hb-DHS could be used not only for autogenous bone graft but also for injection of drugs, growth factor, mesenchymal stem cells and so on to promote fracture healing[22-25]. In addition, in the future it may be possible to substitute absorbable materials such as porous tantalum for the titanium alloy. Therefore, we predict that, once Hb-DHS is widely used clinically, it will become the treatment of choice for femoral neck fracture in young adults.

In this experimental study, the Hb-DHS device was superior to the DHS for fixing femoral head and neck fractures, as evidenced by X-ray film and CT assessment and visual assessment of postmortem specimens, and may therefore come to play an important role in the management of femoral neck fractures in young adults.

SHEN Jia-zuo and LIAN Ke-jian contributed equally to the work. SHEN Jia-zuo wrote the article. The foundation was supported by science and technology fund from Nanjing Military Region (No. 10MA073). All authors read and approved the final manuscript.

15. Kakar S, Little D, Einhorn TA. Can we improve fixation and outcomes in the treatment of femoral neck fractures? The use of pharmaceuticals. J Orthop Trauma. 2009;23(6):413-21