The Diagnostic Value of D-dimer, Procalcitonin and CRP in Acute Appendicitis

The early diagnosis of the acute abdomen is a major goal in surgical practice. Despite the introduction of novel imaging modalities, acute abdominal conditions are still a challenging problem. To date, many inflammatory markers have been used for the diagnosis of acute surgical conditions, including acute appendicitis. Leukocyte count and C-reactive protein (CRP) are the most commonly used laboratory tests. Procalcitonin (PCT) and D-dimer have been studied as novel biomarkers for the diagnosis of acute abdomen in recent years [1].

PCT, inactive precursor of calcitonin, is a 116 amino acid polypeptide glycoprotein with a molecular weight of 13 kDa [2]. It is found only in the C cells of the thyroid gland under normal metabolic conditions. Assicot has first reported the increased PCT levels in patients with bacterial and fungal infections and sepsis [3]. Thereafter, many studies have confirmed that PCT is a biomarker of inflammatory host response to microbial infections and increased in surgical pathologies such as ileus and pancreatitis [4,5]. There is also a proportional increase in PCT levels with the severity of the infection.

D-dimer is a degradation product of fibrin dissolution. Local fibrin formation and lysis are common events during inflammatory response. In general, the elevation of D-dimer levels is not a specific response. It is most commonly used in the diagnosis of venous thromboembolism and pulmonary embolism. Recently, D-dimer has also been used as a diagnostic marker in the acute abdomen.

CRP was first identified in 1930 by Tillet and Francis. It is a non-specific acute phase reactant [6] and mainly stimulates the cell-mediated immunity and chemotaxis in inflammation. CRP levels increase in acute appendicitis in relation with the severity of infection [7,8].

The aim of this prospective study was to evaluate the diagnostic value of D-dimer, PCT and CRP measurements in the acute appendicitis.

This prospective study enrolled 78 consecutive patients who were operated with the diagnosis of acute appendicitis between March 1st, 2010 and July 1st, 2011. The informed consent of the patients was obtained. The study was conducted in accordance with the Helsinki Declaration. The patients using warfarin or heparin, with a pregnancy, and under antibiotherapy were excluded from the study. The diagnosis of acute appendicitis was established based on the clinical findings of acute abdomen, routine laboratory tests and abdominal ultrasonography or computed tomography.

The data were presented as mean ± SEM (standard error of mean) or median and interquartile range. The clinical and demographic variables were compared using the student-t test for continuous variables with a normal distribution, the Wilcoxon rank sum test for nonparametric variables and the chi-square test (or Fisher's exact test) for categorical variables.

General characteristics of patients operated with the diagnosis of acute appendicitis.

Comparison of phlegmonous and perforated appendicitis.

PPV, NPV and DV of inflammatory markers in acute appendicitis. 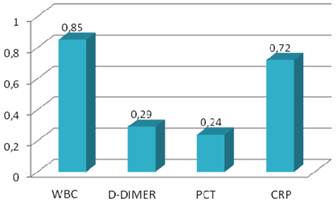 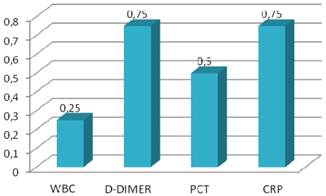 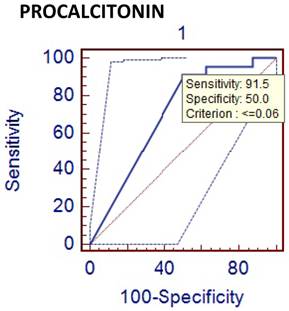 Comparison of phlegmenous and perforated group ROC curve for CRP (cut off value <=1.35). 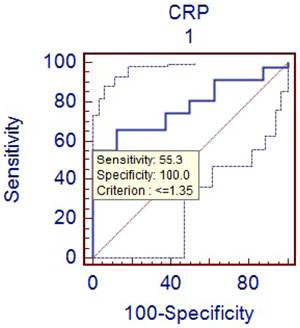 Comparison of phlegmenous and perforated group ROC curve for D-dimer (cut of value<=393). 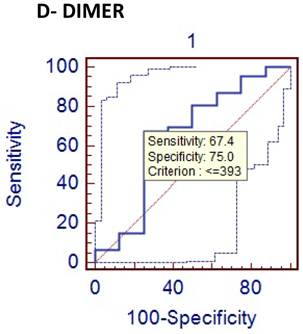 Despite the introduction of novel diagnostic tools in recent years, the diagnosis of appendicitis is still an important problem. Acute appendicitis may be associated with the perforation and serious complications. Misdiagnosis of acute appendicitis can result in unnecessary laparotomies. A 9 to 20% negative appendectomy rate has been reported in literature [9,10,11].

PCT levels have been found to be lower in acute appendicitis compared to the other bacterial infections. In addition, it was claimed that uncomplicated appendicitis does not cause significant bacterial translocation [19], which may explain the low levels of PCT in uncomplicated, phlegmonous appendicitis.

8. Shakhatreh HS. The accuracy of C-reactive protein in the diagnosis of acute appendicitis compared with that of clinical diagnosis. Med Arh. 2000;54:109-10