The aim of this study was to characterize intracranial pressure on brain tissue during non-penetrating ballistic impact to provide a better understanding of the biomechanics of BABT of the head. A physical model of the pig head and live pigs were used as objects of ballistic tests to acquire pressure data. Three characteristic parameters of the pressure wave were considered: intracranial maximum pressure, intracranial maximum pressure impulse, and the duration of the first positive phase. The sensitivity of pressure parameters to impact velocity was examined. Moreover, the intracranial pressure in the physical head model was compared with that in the live pigs.

Preparation of the pig physical head model and experimental animals

A "scalp-skull-brain" pig physical head model was developed to measure the intracranial pressure response to non-penetrating ballistic impact (Fig. 1). The pig physical head was molded from the approximate geometry of a white pig weighing 45.36 kg, which was provided by the Experimental Animal Center, Daping Hospital, Third Military Medical University (Chongqing, China). The scalp was made of polyurethane elastomer, while the brain was produced with silicone gel. Thermosetting resin mixed with calcium phosphate and fiberglass was used as the skull material.

Twenty-four white pigs weighing 43 ± 3 kg were divided randomly into three groups (n=8) for intracranial pressure tests for ballistic impacts at low, moderate, and high velocities. Animals were anaesthetized by transvenous injection of pentobarbital sodium (40 mg/kg) at the beginning of the experiment. All procedures were performed in accordance with the Guide for the Care and Use of Laboratory Animals as adopted by the Experimental Animal Center, Daping Hospital, Third Military Medical University.

Aramid plates (200 × 150 × 9 mm) were used to represent helmet protection and induce BABT in a pig physical head model and living pigs. To simulate the realistic space between the head and a ballistic helmet, a 12 mm gap between the protective plate and the subject was created by placing two pieces of foam padding, which is used specifically for helmets, on the nasion and the occiput of each subject. The nominal target location on each test specimen was the midpoint on the line drawn laterally between the eyes. The subject with ballistic protection was held in a lateral position, ensuring that the firing axis was perpendicular to the protective plate (Fig. 2). The ammunitions used for ballistic impact were 9 mm bullets at low, moderate, and high velocities of approximately 280 m/s, 360 m/s, and 420 m/s, respectively. These velocities were selected from preliminary experiments to provide varying injury risks with no chance of penetrating the protective plates. Each shot aimed at the point on the protective plate that was aligned with the nominal impact location on the subject. The ballistic impacts were conducted eight times at each velocity (low, moderate, and high) on both the physical head model and the live pigs (each live animal was impacted only once). Each plate was used only once in all tests.

Schematic representation of the ballistic impact scenario for both the pig physical head model and live pigs. 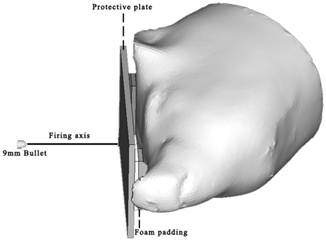 A piezoresistive pressure sensor (EZM-093-500(sg), Saiying Electronics, Anhui, China) was installed inside the brain of each test specimen both in the physical head model and in the anesthetized pigs (Fig. 3). The sensor was inserted into the brain parenchyma through a occipital approach and positioned approximately 12 mm under the parietal bone, facing the point of impact. The location of the sensor was controlled by a scheduled operation procedure performed by one person to ensure as much uniformity as possible among individual subjects. Signals were acquired using a TST6150 numerical recording system (Test Electronics, Chengdu, China) and analyzed with DAP6.01. The data were used to calculate the maximum value of the first positive phase of the post-impact curve of intracranial pressure versus time (Pmax), the duration of the first positive phase (PPD), and the integral of the intracranial pressure curve over the duration of PPD (PImax). 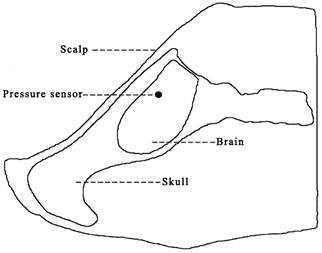 Intracranial pressure of the physical head model and the live pigs

Intracranial pressure time histories were recorded for each ballistic test. As shown in Fig. 4 AB, the typical waveforms captured by the pressure sensors in the brain of the pig physical head model and live pigs exhibited blast-like features characterized by a steep shock front followed by a near-exponential decay. The waveforms of intracranial pressure corresponding to the different ballistic impact velocities display similar agreement.

Intracranial pressures in the brain of the pig physical head model(A) and a live pig(B) with a protective aramid plate following the impact of 9 mm bullets at low, moderate, and high velocities. 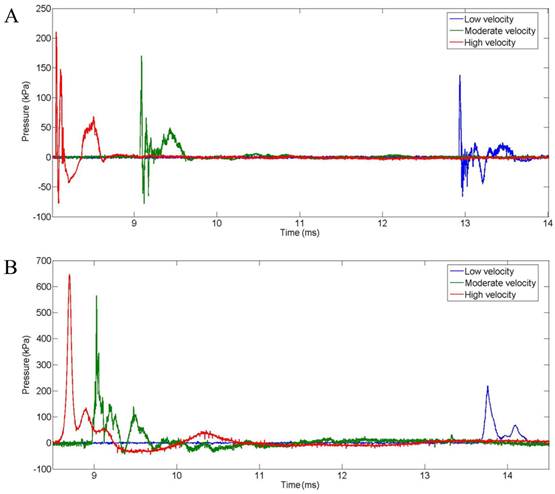 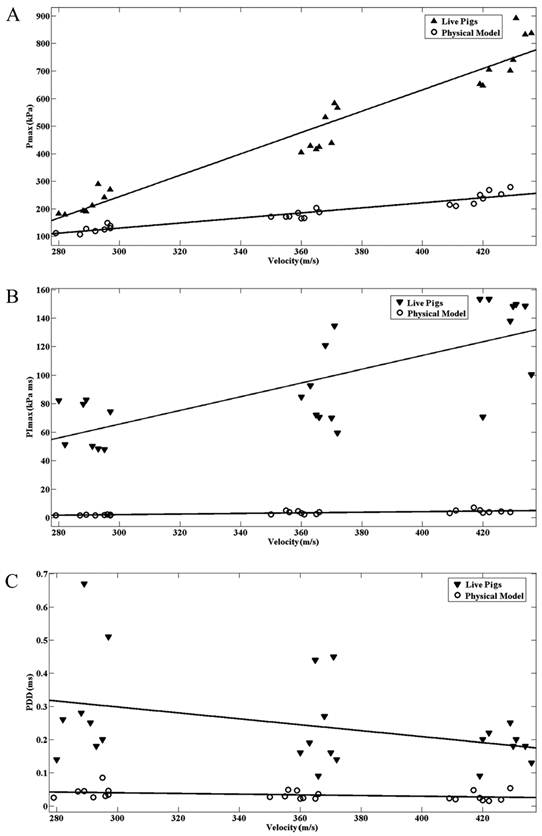 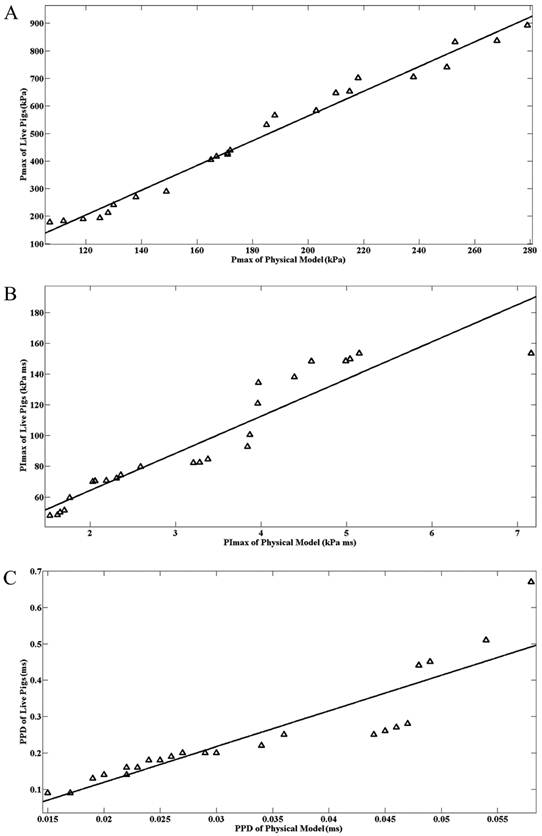 Non-penetrating injuries to the head resulting from BABT have been studied in human cadavers, dry skulls filled with silicone [4,5], and finite element (FE) models of the human head [6]. Although these types of models have accurate anatomy or similar anthropometry to humans, their lack of living physiology remains a main limitation for further investigation of the post-injury physiological response to BABT. Animals possessing living physiology are the only viable subjects in which to study the medical outcomes of non-penetrating injuries to the head, including not only anatomical features but also physiopathological changes, and can therefore help correlate biomechanical response data with the resulting BABT injuries to the head. In our study, we used pigs as ballistic subjects and focused on the brain's intracranial pressure response to non-penetrating impacts to the protected head. In addition, a pig physical head model was also used because of its reusability, which may contribute to providing comparatively repeatable response data. As previously reported, BABT injury to the head may be characterized physically by skin lacerations, skull fractures, and brain damage. Many authors indicate that the skin and scalp absorb 13% to 20% of incident energy. A study of transcranial transmission of blast waves revealed that blast waves pass through the thicker cranium of pigs while maintaining about two-thirds of their original magnitude [7]. Thus, the structural configuration of the "scalp-skull-brain" for the pig physical head model developed in this study is suitable for investigating the biomechanical response of BABT to the head.

High intracranial pressure was observed in the brain as a result of exposure to non-penetrating ballistic impact. However, the pressure waves propagating through the tissue have some of the characteristics of blast waves. Because of these pressure waves, the peak pressure, duration, and impulse can be regarded as contributors to injury [8]. Thus, three parameters, Pmax, PImax, and PPD, were extracted from the recorded pressure curve to describe the characteristics of the intracranial pressure response. Pmax is the maximal instantaneous pressure recorded in the brain, corresponding to local compression of the surrounding tissue under skull deflection. PImax corresponds to the first positive area under the intracranial pressure curve, and refers to the amount of energy transferred to the head. It depends not only on Pmax but also on PPD, which is defined as the duration of the first positive phase. In a previous study on the dynamic effects of projectiles on cadaveric skulls protected by a helmeted plate, the risk of skull fractures correlated well with brain parenchymal pressures [5], indicating that intracranial pressure is an appropriate predictor for studying the effects of cephalic impacts behind helmets. Injury criteria based on intracranial pressure have not yet been determined for BABT injuries to the head. However, conclusions from the related research areas of blast-induced traumatic brain injury (bTBI) and thoracic BABT are also instructive. A study focusing on the biomechanical assessment of brain response to blast pressure waves suggested that the maximum intracranial pressure can be compared with the threshold injury pressure and used to assess the severity of brain injury and the occurrence of cerebral contusion [9]. The intrathoracic pressure impulse was also found to be a useful predictor for pulmonary contusion volume after ballistic blunt impact thoracic trauma [10]. Further investigations are needed to clarify the function of intracranial pressure as an injury criterion for BABT injuries to the head.

The PPD characteristics of the intracranial pressure response to non-penetrating ballistic impact have yet to be detailed. However, the data from several other BABT studies can be used as a point of reference. Bass et al. [11] confirmed that the impact duration is less than 300 μs when a helmet-head system is impacted by a 9 mm bullet. This impact duration is comparable to the PPD values of intracranial pressure in the brains of live pigs (mean PPD=311 μs, 238 μs, and 181 μs for low, moderate, and high impact velocities, respectively) in our study. The mean PPD values of intracranial pressure in the brain of the physical head model are 42 μs, 32 μs, and 28 μs for low, moderate, and high impact velocities, respectively, which are much lower than those for the live pigs. This order of magnitude for PPD has been observed in the pressure responses of internal organs to non-penetrating ballistic impacts conducted on a physical human surrogate torso model (HSTM) [12]. According to the description of the HSTM, the internal organs were made of silicone gel, which was similar to that used to make the brain of pig physical head model. Thereby, the similarity in the material composition is likely to be the main cause of the similarity of PPD values of pressure response in the HSTM and pig physical head model. Despite the fact that PPD decreased with increasing impact velocity, statistical analysis revealed that PPD was relatively insensitive to impact velocity for both the physical head model and live pigs. It is quite likely that the differences between the impact velocities are too small to produce statistically significant differences in PPD. Considering that the PPDs for the live pigs were much shorter than the overpressure durations of short-duration blasts (< 30 ms), which has a substantial effect on the peak overpressure tolerance, the exceptionally short PPD of the intracranial pressure waves will most likely be only a minor factor in BABT head injuries.

As we know, human surrogates have seen increasing use in obtaining mechanical responses to blunt ballistic impacts, which could improve the prediction of injury and the evaluation of protective equipment performance against projectiles [13]. However, discrepancies in the mechanical responses of surrogates compared with humans are inevitable owing to the simplification of human anatomic structure and differences between the material properties of biosimulants and living tissue [14]. Therefore, knowledge of the correlation between the mechanical responses for human surrogates and live pigs is critical for the better understanding and appropriate usage of surrogate response data. Unfortunately, such information remains unavailable because response data pertaining to humans in physiological conditions are understandably inaccessible. Animals, long used as live pigs for ballistic tests, are the only viable subjects for studying a living body's mechanical responses to ballistic impact and therefore contribute to interpreting the biomechanical correlation between physical surrogates and live pigs. In this study, we developed a physical model of the pig head to measure intracranial pressure responses to non-penetrating ballistic impacts and investigate the correlation between the physical surrogate and living specimens. We hope our work may help predict the biomechanical responses of living animals to blunt ballistic impact based on surrogate tests and also provide insight into controlling for differences between living humans and surrogates when developing response and injury targets.

This work was supported by the State key Laboratory of Trauma, Burns, and Combined injury (Grant no. SKLZZ201101). We thank Mr. Liangchao Zhang and Mr. Bo Zhang for their valuable and skillful assistance during the animal experiments and ballistic testing.