Is Helicobacter Pylori Infection Associated with Asthma Risk? A Meta-Analysis Based on 770 Cases and 785 Controls

Objective: Helicobacter pylori (H. pylori) infection has been thought to play a critical role in disorders such as gastric and lung cancer. A number of studies have been devoted to the relationship between H. pylori infection and asthma risk, which have generated inconclusive results. In this study we aimed to derive a more precise estimation of the relationship.

Methods: Meta-analyses evaluating the association of H. pylori infection and asthma risk were conducted and subgroup analyses on ethnicity and source of controls as well as CagA status were further conducted. Eligible studies were identified for the period up to Jul 2012.

Results: A total of five case-control studies comprising 770 cases and 785 controls were lastly selected for analysis. The overall data failed to indicate a significant association of H. pylori infection and asthma risk (OR=1.01; 95%CI=0.82-1.24). Likewise, in the subgroup analysis regarding ethnicity, source of controls and CagA status, no associations could be observed.

Conclusions: The pooled data failed to suggest a marked association between H. pylori infection and asthma risk. Future studies are needed to confirm this conclusion.

Asthma is a common chronic inflammatory disease of the airways, characterized with symptoms of wheezing and shortness of breath [1]. The etiology of asthma remains largely unclear. Smoking and environmental factors as well as genetic factors are thought to be its risk factors [2, 3].

In general, asthma is believed to be caused by exaggerated immunologic responses to antigens in the environment, which are driven by a Th2-mediated immune response. The exogenous infection and microbial substances including H. pylori infection may elicit a Th1-mediated immune response, which suppresses Th2 responses. The lack of adequate stimulation of the Th1 might result in an overactive Th2, which in turn lead to asthma [10]. Moreover, the acquisition of H. pylori may be of importance in the induction of regulatory T cells, which could effectively reduce the possibility of allergic asthma [11, 12]. Thus, one of the H. pylori factors, the neutrophil-activating factor of H. pylori (HP-NAP) which might drive Th1 polarization and display a powerful inhibition of allergic Th2 response, is used as a potential antigen for treatment of asthma [10, 13].

Recently, increasing studies have been devoted to the association of H. pylori infection with asthma risk. However, most of the studies were cross-sectional, with the results conflicting [14, 15]. Elucidating the possible associations may help us better understand the pathological mechanism of asthma and therefore contribute to its prevention.

As cross-sectional designs may have been underpowered in evaluating the association between H. pylori infection and asthma risk, in the present study we aimed to derive a more precise estimation of the relationship via a quantitative meta-analysis of published case-control studies.

We carried out a literature search without a language limitation in the Medline, OVID, EMBASE and CNKI (China National Knowledge Infrastructure), covering all published papers up to Jul 2012, with a combination of the following keywords: helicobacter pylori, bronchus, pulmonary, allergy, asthma and atopy. If any articles in languages other than English were searched, the abstracts were screened and the full texts were further intensely reviewed for obtaining any potential information.

We evaluated potentially associated publications by checking their titles and abstracts and then procured the most relevant publications for a closer examination. Moreover, the reference lists of the selected papers were also screened for other potential articles that possibly have been missed in the initial search. Moreover, a hand search was conducted in the library of Third Military Medical University for any papers that were missed the internet search.

The following criteria were used for the literature selection: first, studies should concern the association of H. pylori infection with asthma risk; second, studies must be case-control studies; third, papers must offer the size of the sample, odds ratios (ORs) and their 95% confidence intervals (CIs), the genetic distribution or the information that can help infer the results. Accordingly, the following criteria for exclusion were also used: first, the design and the definition of the experiments were obviously different from those of the selected articles; second, the source of cases and controls and other essential information were not offered; third, reviews and duplicated publications. After rigorous searching, we reviewed all papers in accordance with the criteria defined above for further analysis.

Data were carefully extracted from all eligible publications independently by two of the authors according to the inclusion criteria mentioned above. For conflicting evaluations, an agreement was reached following a discussion. If a consensus could not be reached, another author was consulted to resolve the dispute and then a final decision was made by the majority of the votes. Extracted information was entered into a database.

The OR of asthma risk associated with status of H. pylori infection was estimated for each study. For detection of any possible sample size biases, the OR and its 95% confidence interval (CI) to each study was plotted against the number of participants respectively. An I-squared value was used as an index for the heterogeneity test, with values less than 25% indicating low, 25% to 50% indicating moderate, and greater than 50% indicating high heterogeneity [16]. A Chi-square based Q statistic test was also performed to assess heterogeneity. If the result of the Q-test was P >0.1, ORs were pooled according to the fixed-effect model (Mantel-Haenszel) [17]; otherwise, the random-effect model (DerSimonian and laird) was used [18]. The significance of the pooled ORs was determined by Z-test. Publication bias was assessed by visual inspection of funnel plots [19], in which the standard error of log (OR) of each study was plotted against its log (OR). An asymmetric plot indicates a possible publication bias. The symmetry of the funnel plot was further evaluated by Egger's linear regression test [20]. Statistical analysis was undertaken using the program STATA 11.0 software (Stata Corporation, Texas, USA).

Relevant publications were retrieved and screened. As shown in Figure 1, a total of one hundred and nine potentially relevant papers were obtained and screened for retrieval. After a careful review, ninety-two irrelevant papers were excluded. In the remaining seventeen studies, two reviews [14, 21] and eight publications not being case-control design [22-29] were discarded. Then, a total of seven case-control studies were identified, of which two studies not presenting detailed raw data were further excluded [30, 31]. Finally, five case-control studies were included in this study [32-36].

All included studies were written in English. We established a database according to the extracted information from each article. The information was listed in Table 1 and 2. According to the lists, the publication year, first author and the number of cases and controls for each study were presented. In the five included case-control studies, serological methods for detecting the status of H. pylori infection were also provided.

All the cases were diagnosed as asthma. There were two groups of Asians [34, 36], one of Caucasians [35] and two of mixed ethnicities [32, 33] in the present meta-analysis. Of the included studies, two provided detailed information about CagA status [32, 34]. The controls used in one study [32] were hospital-based, while those in the remaining four were population-based.

H. pylori infection status among asthma cases and controls included in the meta-analysis

Main results of the pooled data in the meta-analysis

The flow diagram of included/excluded studies. 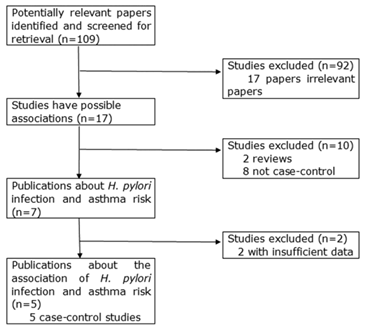 In order to compare the difference and evaluate the sensitivity of the meta-analysis, we reported the results of the random-effect model as follows: the combined OR was 1.02 (95% CI =0.82-1.28), similar to the results obtained from the fixed-effect model. Moreover, one-way sensitivity analysis was also conducted by excluding any single included study [37]. As a consequence, the statistical significance of the results was not altered when any single study was omitted (data not shown), confirming the stability and credibility of the results.

Funnel plot was created for assessment of possible publication bias (Figure 3a). Then, Egger's linear regression test was used to assess the symmetry of the plot (Figure 3b). The data suggest that the funnel plot was symmetrical (t=2.87, P=>0.05), suggesting that the results of the present meta-analyses are relatively stable and the publication bias may have little influence on the results.

Meta-analysis for the association of asthma risk with H. pylori infection. Hp (+) vs Hp (-); (a) Stratified by ethnicity, (b) Stratified by source of controls; (c) Stratified by CagA status; Hp: H. pylori; PB: Population-based; HB: Hospital-based 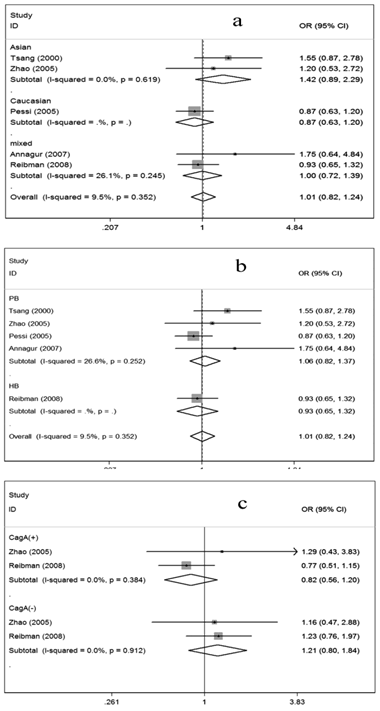 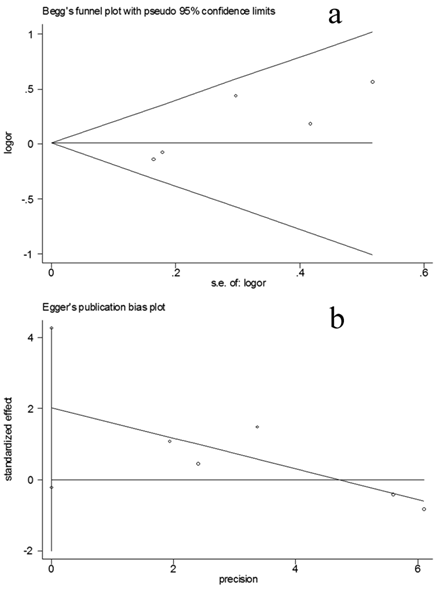 Previously, a number of studies reported that H. pylori infection might play a beneficial role for allergy asthma [10, 14, 38]. Nevertheless, most of the studies were cross-sectional. Compared with case-control studies, cross-sectional design may underestimate the possible risk. Only a proportion of the studies were case-control; however, the results were far from being conclusive. Therefore, we deliberately screened the case-control studies and conducted a pooled analysis assessing the relationship. The crude ORs were calculated according to the raw data obtained from the literature. We did not perform a meta-analysis of the adjusted ORs because adjustment was not comparable among the studies.

Considering the potential effect of the interactions between H. pylori infection and genetic variation on the risk [39], we performed subgroup analyses stratified by ethnicity. In the subgroup with respect to Asians, Caucasians and mixed ethnicities, no associations could be observed. The data indicated little influence of genetic variations on the risk. Then, we conducted subgroup analyses stratified by source of controls and CagA status, respectively, taking into account the potential effects of the confounding factors on the results. Similarly, no associations could be observed in these subgroups, implying that these factors might exert little influence on the risk.

In this present study, the included studies used a stable serological method, ELISA, as a unique approach for detecting the presence of H. pylori infection. Nevertheless, the serology of H. pylori is not a reliable criteria for detecting its effect on asthma. The serologic tests could not give us any information on current H. pylori infection. Therefore, a number of further investigations using multi-approaches such as immunhistochemistry, polymerase chain reaction and smears for exploring the presence of H. pylori are required.

The present study has several limitations. Firstly, the papers identified in our study were limited to those openly published up to Jul 2012; it is possible that some related published or unpublished studies that might meet the inclusion criteria were missed, resulting in any inevitable bias, though the funnel plots and the Egger's tests failed to show any significant publication bias. Secondly, the results may be interpreted with care because of the limited number and small sample sizes of each included studies. Thirdly, subgroup analyses regarding other confounding factors such as smoking status, age and gender have not been conducted in the present study because sufficient information could not be extracted from the primary literature.

In summary, the association of H. pylori infection and asthma risk were assessed by pooling the included data via a systematic meta-analysis. The results failed to suggest a significant association between H. pylori infection and asthma risk. Future well-designed investigations with large sample sizes are required to get a more confidential conclusion.

5. Liu AH. Endotoxin exposure in allergy and asthma: reconciling a paradox. The Journal of allergy and clinical immunology. 2002;109:379-92

17. Mantel N, Haenszel W. Statistical aspects of the analysis of data from retrospective studies of disease. Journal of the National Cancer Institute. 1959;22:719-48