An amniocele is a herniation of the amniotic sac through a uterine defect. Uterine rupture during pregnancy may develop as a result of a pre-existing injury, uterine anomaly, or unscarred uterus. A 30-year-old patient, with a history of 2 vaginal deliveries, presented an amniocele complicated by left fundal perforation and was evaluated with 3-dimensional ultrasound at 23 weeks. Because of worsening lower abdominal pain and vaginal bleeding, she underwent exploratory laparotomy. Herein, we report a uterine rupture with amniocele.

Uterine rupture is a catastrophic obstetric complication, associated with high rates of both perinatal and maternal morbidity and mortality [1]. Maternal mortality resulting from uterine rupture ranged from 0-44% and the overall mortality was 15.9% [2]. Over 90% of uterine rupture cases have been in women with prior cesarean during labor, and rupture of the unscarred uterus is a rare obstetric complication, with an estimated incidence of only 1 in 8000-15,000 deliveries [3, 4]. Spontaneous rupture during the second trimester without labor is exceptionally rare.

A 30-year-old patient, with a history of 2 vaginal deliveries and amniocentesis 1 week prior to admission, was referred at 23 weeks gestation for evaluation of a large abdominal cyst and abdominal discomfort. Abdominal discomfort occurred 2 days before visit, and was aggravated on the day of visit. The patient was a non-smoker and had no underlying diseases. She had not consumed alcohol during her pregnancy. On examination, the abdomen was tender; the abdomen protruded more than the right side than on the left side. Her blood pressure was 120/70 mmHg; heart rate 100 beats/min and body temperature, 36.8℃. We performed transabdominal and transvaginal 2D ultrasound; a large cystic mass was noted on her left adnexa area and oligohydramnios with intrauterine fetus was noted. The cervix was closed and measured 4 cm in length. Three-dimensional (3D) ultrasound (ACCUVIX, Medison, Seoul) was performed and we noted that the umbilical cord had herniated through uterus wall and about 15 X 15 cm sized large amniotic sac had herniated through the uterine wall, 3D image suspected uterine ruptured part (2 cm) of the uterus on the left fundal uterine wall (Fig. 1 and Fig. 2). Laboratory analysis showed a hemoglobin level of 11.3g/dL, a white blood cell count of 15350 cells/mm3 and a C-reactive protein of 1.34 mg/dL. During the hospital observation period (5 hours), the patient complained of vaginal bleeding and progressive lower abdominal pain. Five hours later, the patient's abdominal pain and vaginal bleeding worsened; the blood pressure dropped to 100/80 mmHg and the pulse was 120 beats/min. The treatment team decided to proceed with exploratory laparotomy under general anesthesia. During the procedure and upon entering the abdominal cavity, the entire amniotic sac containing the fetus protruded through a 4 cm ruptured left fundal uterine wall and about 1000 mL hemoperitoneum was detected (Fig. 3). The fetus was delivery by Cesarean section using a classic uterine incision. The fetus expired (male, 700 g) immediately after delivery. Amniotic fluid was clear and not odorful. After removal of the placenta, a double layer of 2-0 chromic was used to close the uterine defect. The patient was discharged 5 days later. 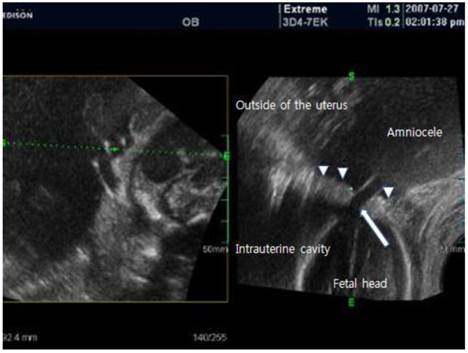 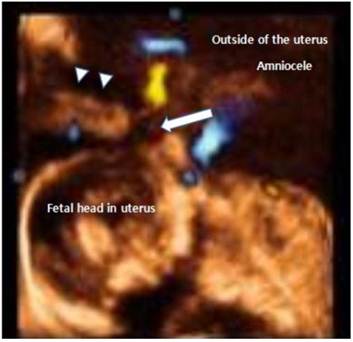 16.8 x 10.1 x 16.2 cm loculated cystic lesion protruded and herniated through the left-sided uterine wall defect. The long tubular structure extending was the umbilical cord in the amniocele. arrow: ruptured site of the uterus. 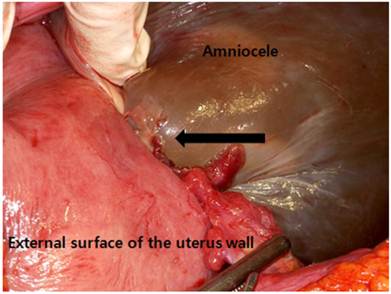 Uterine rupture during in advanced gestation is considered a late complication due to myometrial damage [5]. This rare event may occur without complications during a previous surgery. Uterine rupture implies a defect in the uterine musculature, with extravasation of fetal parts and intra-amniotic contents into the peritoneal cavity, and is often associated with acute symptoms and/ or blood loss [6]. Uterine dehiscence is classically defined as a separation of the uterine musculature, without extravasation of the intra-amniotic contents and fetal parts into the peritoneal cavity.

There is little doubt that prompt recognition of uterine rupture and expeditious recourse to laparotomy remain the critical factors influencing morbidity and mortality of the mother and of the fetus. An amniocele is a herniation of the amniotic sac through a uterine defect [7]. Our case was initially diagnosed as a large abdominal cystic mass, but after 3D-ultrasound assisted identification of the uterine rupture, and by finding amniocele connected to the defect, we ensured an accurate diagnosis. The diagnosis could have been possible using 2D ultrasound by close observation, but with 3D ultrasound, 3-dimensional observation on the uterine defect was more helpful towards making a definite diagnosis. In addition, when the defect was located at the posterior of uterus where it was difficult to make an observation with 2D ultrasound, 3D ultrasound had superior values to 2D ultrasound. Since antepartum uterine rupture is a life threatening event to the mother and fetus, a rapid and accurate diagnosis is very important to improve prognosis.

Spontaneous uterine rupture with an unscarred uterus has been reported in adenomyosis, placenta increta/percreta, uterine anomalies, and in other conditions that have remained unknown [8]. The cause of the conditions in this case is not clear. The only aforementioned event was an amniocentesis 1 week ago prior to the visit. However, as the rupture site was fundus of uterus, it is difficult to define that the amniocentesis procedure was the cause. Dyer et al [9] found the posterior fundus to be the inherently weakest section of the uterus. Previous work has suggested that prelabor ruptures tend to involve the upper segment [10].

Since the uterine rupture is likely to incur even if there are no risk factors, a spontaneous rupture should be considered in pregnant mothers with symptoms. In terms of diagnosis, 3D ultrasound is more likely to provide better information on the location or the size of a rupture than 2D ultrasound.

1. Hofmeyr GJ, Say L, Gülmezoglu AM. WHO systematic review of maternal mortality and morbidity: the prevalence of uterine rupture. BJOG. 2005;112:1221-8