Analysis on the Pathogenesis of Symptomatic Pulmonary Embolism with Human Genomics

METHODS: Twenty patients with PE and 20 age and gender matched patients without PE as controls were enrolled into the present study in the same period. The diagnosis of PE was based on the clinical manifestations and findings on imaging examinations. Acute arterial and/or venous thrombosis was excluded in controls. The whole human genome oligo microarray was employed for detection. Statistical analysis was performed with t test following analysis of very small samples of repeated measurements and Gene Ontology (GO) analysis.

CONCLUSION: The damage to vascular endothelial cells is not necessary in the pathogenesis of VTE, and only a fraction of factors involved in the shared coagulation cascade are activated. Genomic results may provide a new clue for clinical diagnosis, treatment and prevention of VTE.

Thrombus which may result in pulmonary embolism (PE) mostly comes from deep venous thrombosis (DVT). Altogether, both PE and DVT are named venous thromboembolism (VTE). Because of the high incidence of misdiagnosis, morbidity and mortality, VTE has become one of the essential medical problems around world (1, 2). After 1990's, clinical report of incidence of PE are sharply increased yearly in China (3). After 1990's, clinical reports of PE are sharply increased yearly in China (3). In other Asia regions, such as Japan, Thailand, Singapore, Taiwan, the number of reported PE cases is also increasing (4-8). There are nearly 900,000 new PE cases in USA every year (9), 78,000 new cases in Canada, 100,000-200,000 cases in Europe including France, Italy, Spain, Britain, Germany, and 47,000 cases in Australia every year (10). According to the statistical data, provided by an epidemiological surveillance in US, PE is the third leading cause of death (11, 12), only lags behind malignancy and myocardial infarction.

Virchow's classical triad of abnormalities including blood stasis, hypercoagulability and vessel damage has been regarded as the authentic theory for explaining pathogenesis of VTE since 19's century (13), however, the triad does not fit all clinical profiles.

In 1965, Egeberg et al (14) firstly introduced the concept of thrombophilia based on discovering a family with an autosomal dominant inheritance disease whose members manifested with repeatedly onset of DVT due to depletion of antithrombin III. Since then, many reports have considered that genetic gene mutation was one of the major factors in the pathogenesis of VTE (15), but there has been a lack of sufficient genetic etiology evidence in many clinical PE patients.

In recent years, some scholars have suggested that DVT-PE is a heterogeneous polygenic and multifactor disease involving the interaction of hereditary factors and environment with many risk factors such as trauma, surgery, advanced age, malignancy, pregnancy, heart failure, stasis, oral contraceptive, and so on (16). In 2004 and 2008, ACCP proposed risk stratifications in patients receiving surgery, and different strategies should be performed for patients with different risks to prevent the occurrence of VTE (17,18). However, the annual number of VTE cases is increasing over year actually. Generally, the traditional concept can merely be verified merely in few patients with VTE, the pathogenesis of majority of other patients is still to be elucidated.

Gene chip analysis provides the advanced tool for the study of gene function (19-21). It can be a reliable approach for the study of differential gene expression between healthy people and patients and for the elucidation of molecular etiology of VTE.

Twenty patients enrolled in PE group were those who admitted in hospital during 2007, with 11 males and 9 females, averaged 70(±14) years of age(44-89 years old). ALL patients were diagnosed as PE in accordance with at least 2 of following criteria. 1)Selective pulmonary arteriography showed filling defect or blockage; 2) Pulmonary ventilation perfusion scanning exhibited single or multiple blood flow perfusion defect with normal or abnormal ventilation, mismatched ratio of ventilation/perfusion; 3) Other clinical characteristics including typical manifestation of PE, arterial blood gas analysis, D-dimer test, ultrasoundcardiogram (UCG) and chest computerized tomography (CT) supported the diagnosis and excluded other cardiac and pulmonary disorders. Twenty patients with ischemic heart disease admitted at same period, excluding PE, DVT and other congenital bleeding and thrombosis diseases with comparative clinical presentation (11 males, 9 females, 44-91 years old with mean age 72±14) were enrolled in control group. The study protocol was approved by local ethics committee and informed consent was obtained from all patients in accordance with the declaration of Helsinki.

5 ml of peripheral blood samples anti-coagulated with EDTA were drawn from patients suspected with PE immediately after admitting to the hospital and from those patients without PE, respectively. Mononuclear cells were obtained through density gradient centrifugation with Ficoll solution and remaining red blood cells were destroyed with erythrocyte lysis buffer (Qiagen, Hilden, Germany). Total mononuclear cell RNA was extracted with TRIzol(Invitrogen, Carlsbad, USA) and purified with Qiagen RNeasy column (Qiagen, Hilden, Germany) according to the manufacturer's instructions. Isolated total RNA was testified and quantified by means of Nanodrop ND-1000 spectrophotometer (Nanodrop Technology, Cambrige, UK).

RNA samples of patients with confirmed diagnosis of PE and controls were labeled using indirect labeling method. Briefly, 1μg of total RNA was reverse transcribed. The cDNA then undergoes second strand synthesis and clean-up to become a template for in vitro transcription (IVT) with T7 RNA Polymerase. During IVT, the modified nucleotide, 5-(3-aminoallyl)-UTP (aaUTP) was incorporate into the cDNA. After that, fluorescent Cy3 was chemically coupled to aaUTP which contains a reactive primary amino group on the C5 position of uracil. The dye incorporation rate was assessed with a Nanodrop ND-1000 spectrophotometer and was found to be between 1.2 and 1.4 pmol/μl. Hybridization was carried out using the Agilent oligonucleotide microarray in situ hybridization plus kit (p/n 5184-3568), following the manufacturer's instructions. Briefly, 750 ng of Cy3 labeled sample cDNA was subjected to fragmentation (30 min at 60°C) and then hybridization on 44K Human Whole-Genome 60-mer oligo-chips (G4112F, Agilent Technologies) in a rotary oven (10 rpm, 60°C, 17 h). Slides were disassembled and washed in solutions I and II according to the manufacturer's instructions.

Random variance model (RVM) corrected t-test was used for the differential gene expression screening due to the small number of patients (20 cases each group) was far less than the amount of genes and low freedom degree of gene expression signal. P<0.05 is criterion of significantly different genes.

Gene Ontology organizes gene function into hierarchical categories based on biological process, molecular function and cellular component (22-24). Fisher's exact test was applied for over representation of selected genes in GO biological categories. In order to assess the significance of a particular category by random chance, false discovery rate (FDR) was estimated for all of categories. After 5,000 re-samplings, FDR was defined as FDR=1-Nk/T, where Nk refers to the subtracted number which was from Fisher's test p-values minus ϰ2 test p-values in random samples. We specified the threshold of significant GO as p-value<0.05, FDR<0.05 and enrichment parameters. Enrichment represents the degree of gene expression significance. The equation of enrichment is as following

Similar to GO analysis, Fisher's exact test was employed for the study of over-representation of selected genes.

To identify the gene categories with differential expression in patients with or without PE, Gene Ontology analysis was carried out on the experiment data. The union of all differential expression genes resulted from data analysis are 2308 genes in patients with PE compared to patients without PE. Among them, 2238 genes are up-regulated and 70 are down-regulated. The main gene ontology categories impacted by these genes involve the up-regulation of 19 functioning categories against 4 down-regulation categories. Up-regulated genes are those genes whose functions are associated with transformation, phosphorylation, cell survival and cell conjugation, et al. While the function of down-regulated genes are relevant to the function of plasma membrane and activity of receptors, especially to the lymphocyte receptor complex and immunological synapse (Fig.4). 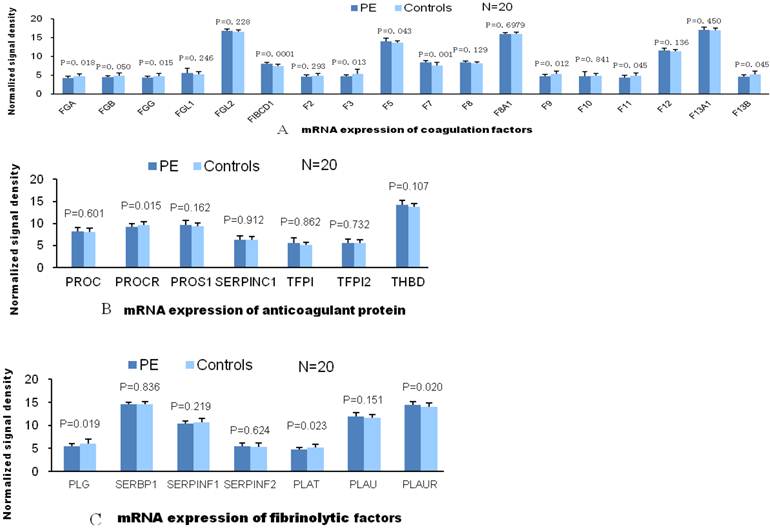 A, B and C demonstrate the differential mRNA expression of platelet functioning genes in PE and control group. Compared to patients without PE, significantly elevated mRNA expression were found only in 2 (GP6, PAFAH1B2) of 11 genes of aggregation, 3 (GP1BA, GP9 and ITGA2B) of 7 genes of adhesion and 1(THBS3) of 15 genes of releasing, respectively 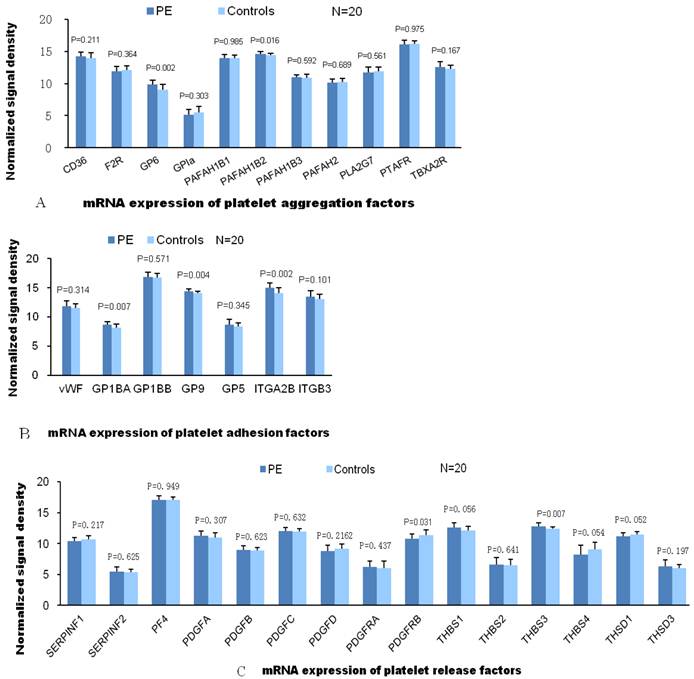 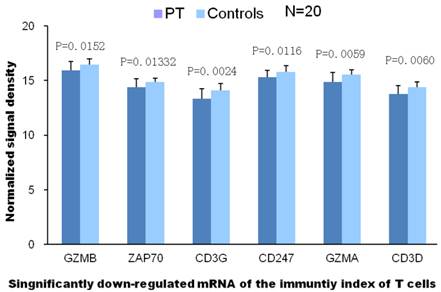 Two genes with down-regulated expressions are closely related to the T cell mediated immunity according to GO analysis (with high value of Enrichment). These results reveal that T cell mediated immunity has been declined markedly in PE patients. The declined T cell receptor complex displayed as significanlly diminished mRNA expression of CD3G, CD3D, CD247, ZAP-70, T cell granzyme A and B, which will result in loss of functions of cytotoxic T cells.

Additionally, the high mRNA expression of L-selectin, ITGAL and ICAM-1 in PE patients revealed the elevated adhesion of vascular endothelial cells, white blood cells and platelets which indicated that the adhesion molecules play an important role in the pathogenesis of VTE.

The functions of platelets are characterized by aggregation, adhesion and release response (25). Our results showed the mRNA expressions of 3/7 adhesion molecules were markedly up-regulated in PE patients, which suggests the adhesion of platelets plays an important role in the pathogenesis of PE.

In 2011, we reported the proportions of CD3+T cells and CD8+T cells were markedly reduced and CD4/CD8 significantly increased in a series of CTEPH patients, which suggests the compromised T cell immunity in CTEPH patients and imbalance between CD3+T cells and CD8+T cells (26). In addition, we also found that the number of CD3+T cells and CD8+T cells was dramatically reduced in a series of acute PE patients and cytological findings also supported the results from genomics studies on PE patients (27). The occurrence of PE is related to the deficient or compromised T cell mediated immunity. This deficiency of T cell immunity may occur under the following conditions: 1) viral infection; 2) malignant tumors; 3) medication with immunosuppresants; 4) malnutrition. In the present study, most of subjects were old patients and malnutrition was not clinically obvious. Moreover, malignant tumors were not found in these patients and medication with immunosuppressants was absent. Thus, the compromised T cell immunity might be possibly related to viral infection.

In 2010, we reported a patient who died of SARS developed VTE in multiple organs, which implies the viral infection induced systemic VTE and there is correlation between viral infection and occurrence and VTE (28).

Comparisons between PE patients and controls revealed the mRNA expressions of only a few proteins in the coagulation system, anti-coagulation system and fibrinolysis system were markedly up-regulated and only 3 factors or receptors in the shared coagulation cascade were activated, which was inconsistent with traditional theory that coagulation factors are comprehensively activated.

We reported in our previous study that the main component of thrombus in acute venous thrombosis was fibrinogen and albumin and cytoskeletal proteins accounted for only a minor fraction of the thrombus (29). The thrombus composed of fibrinogen is unstable, which makes the delayed thrombolysis feasible and also explain the therapeutic effectiveness of transcatheter thrombolysis not long after APE. Findings support that the formation of thrombus in VTE is not due to the comprehensive activation of coagulation factors as in traditional theory.

In the present study, we apply the unitarian theory to explain the pathogenesis of symptomatic VTE: the occurrence of symptomatic VTE is closely related to the compromised immune function as well as the viral infection. This also explains why VTE is frequently found in patients with advanced age, trauma, surgery, malignant tumors, heart failure, immobilization, pregnancy and other risk factors. Our findings provide new knowledge on the etiology and pathophysiology of VTE and novel clue for the clinical diagnosis, treatment and prevention of VTE.